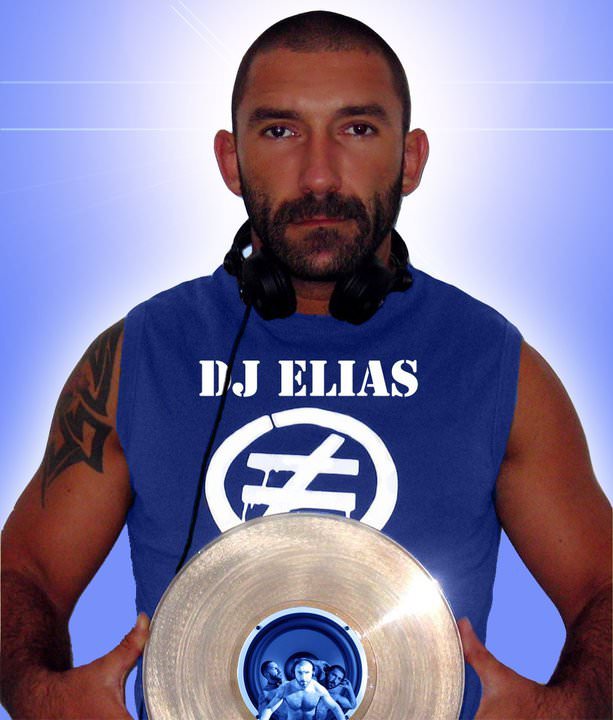 Elias was born in Uznach (Switzerland) to Spanish parents, and at the age of 7 they all moved back to their country of origin.
His career as a deejay started in 1990 in Palma de Mallorca, almost by coincidence, when he was obliged to replace his friend DJ Cani, in order to allow him to enjoy a holiday period in the club where both were working.
His friend just gave him some basic elements of the booth functioning, putting Elias in an uncomfortable situation because he didn’t really know how to mix.
The truth is that at the beginning it was a total failure, but little by little, he started learning the right technique and getting influenced by the good taste for music of Cani who – at that time – was able to get his vinyls right from New York well before they were delivered to import stores.
A few months later, Elias was already able to master the mixing technique and had his own discs; step by step, he made his way until in 1994, after having played at the best Mallorca clubs, he decided to take his chance in Ibiza, where just after arriving he signed up as resident DJ at “Space” on a very special date for him: the 6th of August, the day of his birthday.
From then on, his career spread out on a international level, opening the doors to Paris where just after the Ibiza season he became resident DJ at the “Queen”, the most popular club in the city.
Once there, he got influenced by the French Touch and the New York Sound, a particular sound played at Kit-Kat (Le Palace), the most elegant afterparty that he had ever seen, where people danced the night away until midday on a deep sound.
In his career he has been invited to clubs of international reputation like Space, Ku, Privilege, Pachá, Ushuaïa , El Ayoun , Amnesia and DC10 in Ibiza; Queen, Le Mix , Djoon , Le Palace and Les Bains in Paris ; Fuse, Mirano, Café De Anvers and La Rocca in Belgium; Sona in Montreal; Liquid Room in Singapore; Titos Palace, Pachá and BCM in Palma de Mallorca; Goa, Ohm and Space of Sound in Madrid; MetroDanceClub in Alicante; Kremlin in Lisbon; Gorgeous and Alien in Rome; Amnesia and The Bass in Milan; Haoman 17 in Tel Aviv, and in special events like the “Bread & Butter” or the “Circuit Festival” in Barcelona.
He currently lives in Ibiza and he’s resident DJ at “La Démence”, one of the most important gay events in Central Europe happening once a month in Brussels for more than 20 years. Always in Brussels, he also plays at Fuse, Mirano and K-nal, where more than 2500 people from different nationalities get together.
He worked for important record labels like Bedrock Records, Stereo/Iberican Recordings and Stomp Recordings, he set up the latter with his associate José de Divina.
He also worked for Wargram Music, the French label with which he recorded the collection “WADKlubmix by Elias/Paris/Ibz” and issued by the prestigious WAD Magazine.
More than 20 years of experience and personality are reflected in his sets, where he always creates newly fresh and elegant playlists in any of his 2 favourite styles: deep and soulful (for rather “funky” clubs), or house and tech-house for main rooms.