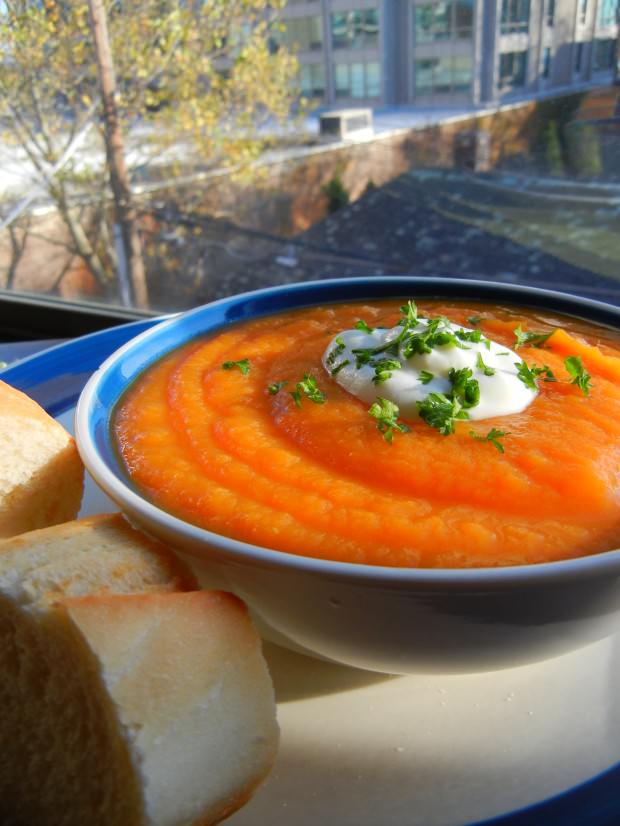 Some say that “the way to a man’s heart is through his stomach.” If this is true and you become successful, depending on how thorough you are, the plan might just backfire. No one likes an overachiever… or a flabby stomach. Don’t worry, though! There is hope, and it comes in the form of nutritious, savory, and delicious food. This is not an oxymoron. Healthy cooking is sexy and anyone can do it. This recipe will not only get you a man, it will lose your stomach, and get you both dreaming of this refreshing yet hearty soup.

2 pounds (about 1 kg) of sweet potatoes; peeled & cut into equal sized cubes
1 pound (about ½ kg) pie pumpkin (about ½ of a medium-sized pie pumpkin); seeds and stringy inside bits removed
2-3 small white potatoes; peeled & cut into equal sized cubes
4 medium-sized carrots; peeled and cut in half (so there are two fat pieces)
6 stalks of celery, washed & cut in half (make it fat!)
6-8 cloves of garlic (about half of a head), taken out of husk; easiest way to do this is to cut the tips off and smash each clove with an olive oil bottle (it really works!)
2 large onions; cut in quarters
2-3 tablespoons of chicken base; I prefer the kind that comes in a tub, but bouillon cubes will also work.
2 ounces (about 50 grams) of fresh ginger root; peeled & cut in relatively small chunks (it will be easier to blend the smaller the size, but if they are larger, it is not that big of a deal)
3 sticks of cinnamon or 3 teaspoons ground cinnamon
6 whole cloves or ½ teaspoon of ground cloves
1 tablespoon of salt
32 ounce (or 1 liter) container of plain yoghurt
4 tablespoons of finely chopped fresh parsley
2-3 cups 2% milk (optional)
1 loaf of French bread

In total, the soup will make about 10-14 servings.

Rules of the Benson Kitchen:

Before we start with the directions, a few rules/principles of the kitchen must be stated. First, pour yourself a glass of wine! If you are nervous about cooking, for goodness sake RELAX! It is supposed to be fun, so stop being so serious for crying out loud! Wine is of course not necessary, but it will certainly help with this.

Second, cooking is not an exact science, so do not treat it as one! This rule really has worked out for me. I have never been very good at following exact orders (please do not ask for referrals on this point), and it has been a huge benefit in the kitchen. What can I say; I’m a guidelines kind of gal.

Third, don’t be afraid to change something in the recipe! Let’s be honest, we all know that it won’t be your first time exploring an alternative in your life. This is why we are all here reading a lifestyle magazine. Just go with it. Enough said.

Fourth, be careful with those knifes or any other sharp objects! What I mean to say is, DO NOT CHOP YOUR FINGERS OFF!! This SHOULD go without saying, but I want to cover my bases (and so does my lawyer). This word of caution also should be applied to HOT objects, and I am not talking about the shirtless six-pack version. Put your hands all over that kind (but still be careful about getting burned). Okay, with all of that said, I think we are ready to begin.

All of the vegetables (excluding the ginger root) in this recipe will be fully cooked in boiling water, and then blended together. I use two stock pots for this recipe. In one, the pumpkin and potatoes will be cooked, and the second one the other vegetables. It will be a bit more to clean, but worth it for the greater ease in maneuvering the ingredients later on. Fill enough water in each pot so that the ingredients will be fully covered (about 1/3rd of a stock pot).

The pumpkin will take the longest to soften, so add that to the boiling water first. After 10-13 minutes, add the sweet potatoes, and after another 4-5 minutes, add the white potatoes. The potatoes will take about 20 minutes to cook all the way. Test the potatoes by poking them with a fork. If the fork can go in easily, the potatoes are ready to be removed from the water. Once the pumpkin is fully cooked, the meat will be slightly separated from the shell. Especially keep an eye on the pumpkin because cooking times can vary slightly, but it should be done around the same time as the potatoes.

Right after the potatoes are added to their pot of boiling water, add the carrots in the second pot. After about 5 minutes, add the onions and celery. After another 5 minutes, add the cloves of garlic. The water from this pot will be used as vegetable stock for the soup, so do not drain it once the vegetables are cooked. Like the potatoes, this pot should also take about 20 minutes. Check this set of vegetables the same way, and poke a fork in it. Like the cliché, it really is the best way to tell if it is done!

Remove the pumpkin shell carefully with a slotted spoon and a fork. Set it in a large mixing bowl to let it cool. Once the pumpkin is cool enough to touch it, grab a hold of the shell but not the meat, and pick it up. The meat of the pumpkin will fall out. Drain the potatoes in a strainer/colander. Ladle the carrots, onions, celery and garlic out of the pot (remember, we will be using the water for the soup, so do not dump it!).

All of the ingredients up until this point with the addition of the fresh ginger will be blended in a blender. You won’t be able to blend all of the ingredients at once. That is, unless for some reason you have an industrial size blender! Please do not explain to me why you might have one. I don’t want to know. Some things are best left unsaid.

Anyway, add enough water from the vegetable stock to blend each batch, but not so much that it is in an extreme liquid form. Keep in mind that it is much easier to add water to the soup later than it is to take it out. If you do add too much water, you can thicken soup in a number of ways. A couple of my favorites are to add cooked pasta to the blend or add cornstarch. Another method is to add flour. Whichever method you decide to use to thicken the soup, wait to do it once everything is blended and in the pot (unless it is the pasta method).

Pour each batch in the empty stock pot that the pumpkin and potatoes were in (this is where it comes in handy to have two stock pots!). Note: the ginger may take a bit more time in the blender to get fully blended, so double check the batches.

Once all of the ingredients are smooth and in the stock pot, add the cinnamon sticks, cloves, chicken stock, and salt. Let the soup simmer on low heat for 30-45 minutes, stirring occasionally.

If you want to make the soup a little creamier, or if the ginger is a little too spicy, add the milk and let it warm for about 5 minutes. If you decide to add milk, stir the soup frequently so that the milk does not curdle. Another method is to add some milk to each individual bowl.

To finish, add a dollop or two of the plain yoghurt on top of each bowl of soup. It tastes best when the yoghurt is cool and the soup is hot. Sprinkle parsley on top of the yoghurt to add a fresh burst of flavor. Serve with your favorite French bread, and you are ready to eat! Bon appetite!