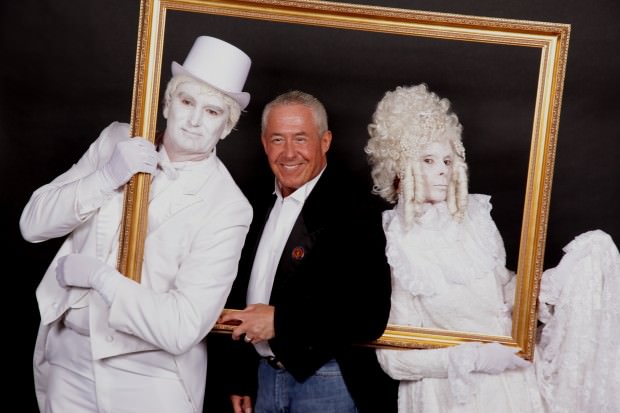 Celebrity Portrait Artist Anthony Whelihan is just like his paintings. The more you get to know this Minneapolis based artist, another layer is delightfully revealed that you didn’t see coming. “People say to me all the time that they see things that aren’t actually there in my paintings. They say ‘I love the (fill in the blank) that I saw!’ and I say, ‘I don’t know what you saw, but that is not in there,’” says Whelihan as he chuckles. Whatever it is that you see (or don’t see), Anthony Whelihan’s work invokes colorful imagination. The visual energy from his pieces makes you feel as though you are looking not just at a painting, but at the art of what is possible. 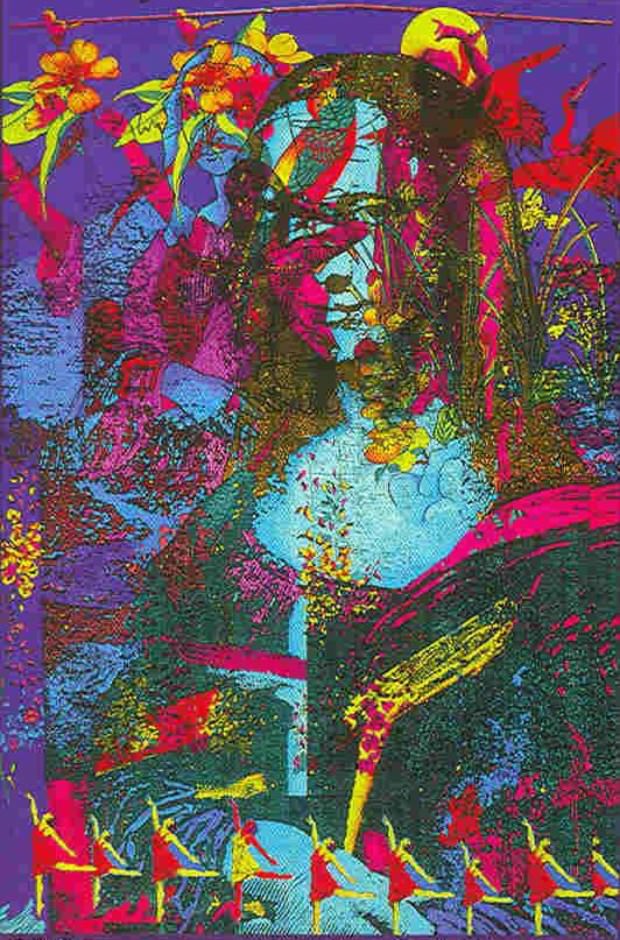 “You Can Call Me Mona,” original artwork by Whelihan Fine Art.

Don’t let Whelihan’s adorable exterior fool you; this man is not a pushover. “Some people think that artists don’t have any (business) sense. No, that is wrong. Just because we are artists does not mean we are dummies,” said Whelihan. If there is any doubt whether this is true, the success of his work speaks for itself. Like Andy Warhol, Whelihan has created hundreds of celebrity portraits, and has also been commissioned by organizations such as Disney, the NFL, and even NASCAR. That thought runs around my head like the Indy 500. In my mind the words NASCAR and Minnesota conjures images of a Michelle Bachman political rally, and not of a gay celebrity portrait artist.

I recently attended a Snow Queen Costume Ball that Whelihan hosted at his home and studio in the Minneapolis area. His artwork was displayed throughout the living space, which provided the perfect setting to get to know his work through my own observations and by talking with his friends and neighbors. “There are three things that every great party needs,” said Whelihan. “The first is an invitation, the second is food, and the third is people.” Luckily for me I got to be one of those (fabulous) people.

Another person there was Tim Henning, Anthony’s partner. Tim, who also has a flair for creativity, is a gifted chef and catered the event. “I do the decor, and Tim does the food,” Anthony tells me. Other than that, the couple does not have roles. In describing their relationship Whelihan says, “We are like two guys in a dorm. We have a fight, and then it is done.” Whatever their secret recipe is, it is working. The two met when they were out in town in Minneapolis. They ran into each other shortly thereafter, and Anthony asked Tim over for dinner. Three weeks later the pair moved in together, and 28 years after that the couple is still together. 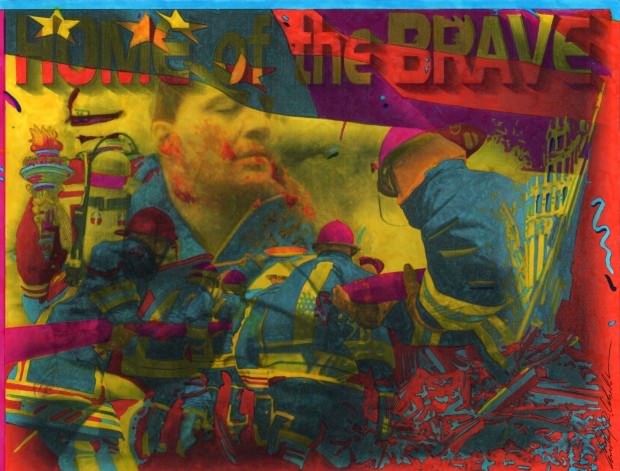 “Home of the Brave” is a painting in honor of the New York rescuers following the September 11th attacks in 2001.

The merging of images has been a strong artistic point for Anthony Whelihan, although it hasn’t always been appreciated. Whelihan described an early memory, “In grade school, the nuns called my parents because I didn’t color within the lines. My dad told me to not worry about it.” And thank goodness he didn’t. This rebel has a cause! In fact, there are seven, and that is not just because of his suite on James Dean! 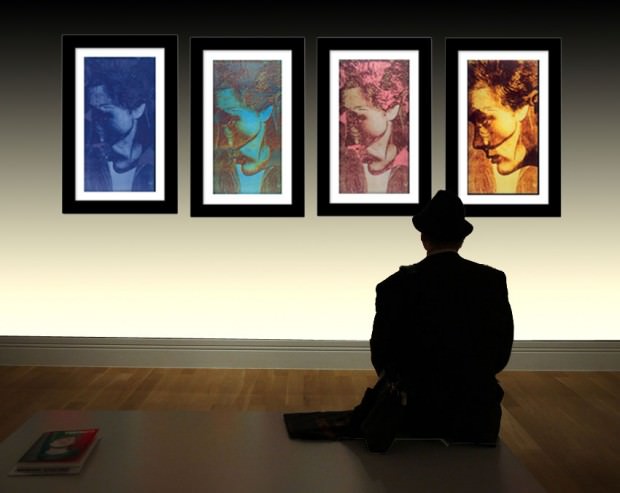 An onlooker takes in the “James Dean Suite” by Anthony Whelihan.

Whelihan is a big believer in giving back to society and is extraordinarily involved in charitable work. His current projects include two AIDS organizations (The Aliveness Project and The Minnesota AIDS Project), the PACER Center (which provides assistance for children with disabilities), the Smile Network International (which funds surgery for children in developing countries born with cleft palates), Give Us Wings (which provides economic development assistance to rural Kenya and Uganda), Gilda’s Club (a cancer support, education and emotional wellness organization), and the Twin Cities Gay Men’s Chorus (an art & cultural organization in Minneapolis). 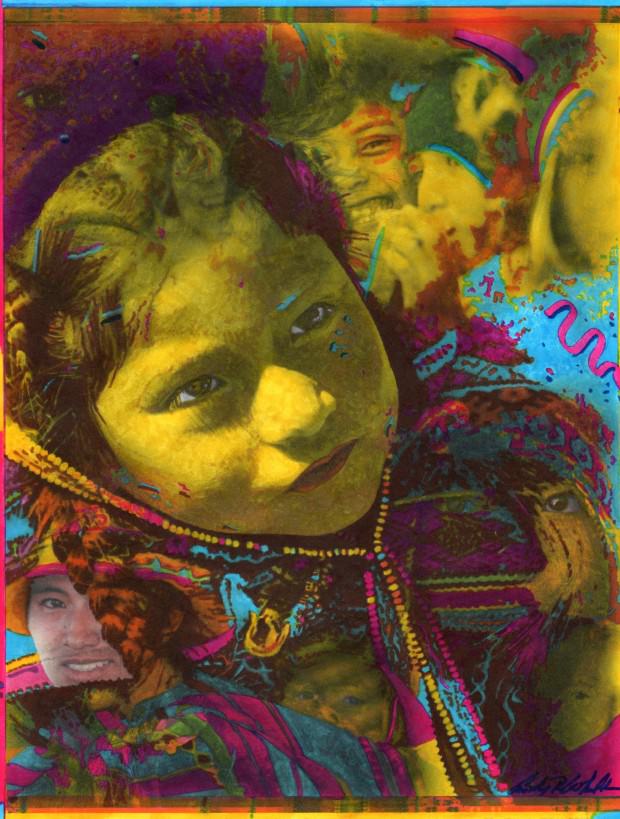 In addition, many celebrities partner with him to raise money. Lionel Richie, for example, participated in an auction fundraiser for the PACER Center, and Whelihan donated a portrait of the singer/songwriter. The artwork sold for $17,000, and Richie performed several songs directly following the auction. He was so enthusiastic about the sale that he stopped his concert twice to express his delight to the crowd, and a clay bust sporting a jheri curl wasn’t even necessary to grab his attention; it was a Whelihan.

Lionel isn’t the only reason why Anthony often finds himself saying (or singing), “Hello, is it me you’re looking for?” It is as a result of his charity work. It turns out that donors for philanthropy are also often enthusiastic art collectors. “I will sometimes be a guest lecturer at art schools,” said Whelihan, “and I tell the students ‘What is your best work? Give it away!’ and they look at me like I am crazy. Then I say, ‘Did you forget who goes to charities?’” 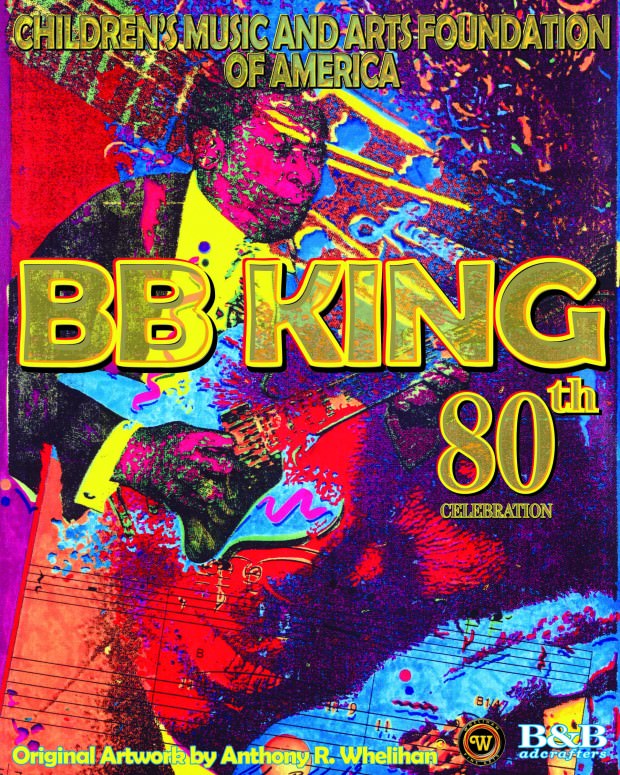 A banner showcases Whelihan’s work to promote a fundraiser for the Children’s Music and Arts Foundation of America in honor of BB King’s 80th birthday.

Even before he was a widely known artist, Anthony Whelihan donated paintings for charitable auction. He came in contact with one of his earliest admirers at one of his first charity events. Whelihan was approached by a woman asking him if he knew where the artist Anthony Whelihan was. “My friends will go to great lengths to pull pranks on me, so I played it off like I didn’t know who this Whelihan guy was,” said the artist. The woman was Anthony’s kindergarten teacher, and attended the $1000 a plate dinner just to see him again. “She told me that she had saved all of my artwork from when I was in her class, and I asked her: ‘You saved all of the artwork from all of your students for all these years?’ And she said, ‘No, I only saved yours,’” said Whelihan as he recalled their conversation. Talk about a divine intervention. Apparently not all of the nuns from his Catholic school upbringing shared the “inside the lines” worldview. This reminds me that I really should go to confession, and I’m not even Catholic.

On top of all of his success, the biggest feather in Anthony Whelihan’s hat is a $250,000 commission he received from Ameriprise Financial to design one of the largest canvas murals in the world. The piece is titled “Seasons of the City,” and its entire 5,500 square feet (about 511 square meters) hangs behind a glass wall on the exterior of the Minneapolis Convention Center. The work is classic Whelihan. Just like a kaleidoscope of color, shapes and patterns unravel in a torrent of visual activity. Slowly, recognizable figures come to form – for me the first was a smiling human face and the second a Ferris wheel – until the scene unfolds before the viewer. 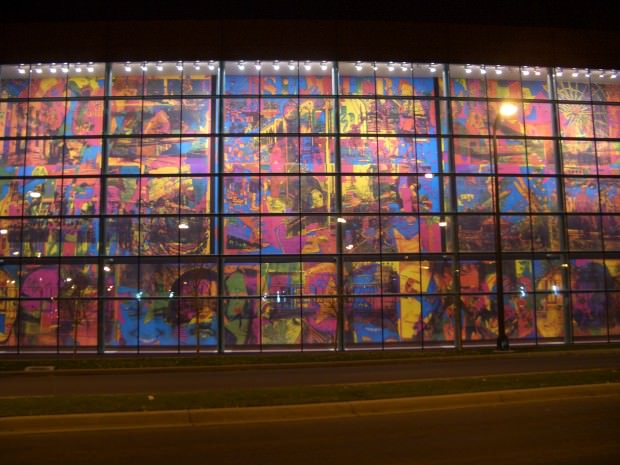 Full view of “Seasons of the City,” a 5500 square foot (511 sq meters) canvas mural that hangs on the outside of the Minneapolis Convention Center.

In creating his work, Whelihan describes that he starts with a singular silk screen image, and then builds additional images on it as if it were a step ladder. He will then return to the first image and paint on it by hand. Whelihan summarized the process by saying, “The more you change, the more the original comes through.” I couldn’t agree more.

For more information on any of the charities mentioned, visit: