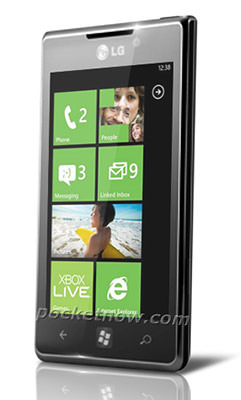 LG is obviously about to complete the development of yet another WP smartphone: LG Miracle. We don’t suppose that this phone is able to float on water, turn water into wine or even resurrect itself after being declared by LG technicians to be “dead”, so perhaps the name has taken liberties with qualities associated with the noun. Having said that, this will be a new Windows Phone handset, where a press photo of it has been leaked – not from an official source, but that does not mean it is a Photoshop job.

Apart from knowing how it looks like, we have also caught whiff of what the LG Miracle packs inside. It is said to run on a 1GHz Scorpion processor, sporting a 5-megapixel camera at the back that shoots 720p videos, a VGA front-facing camera, and a WVGA NOVA display – the first of its kind where Windows Phone handsets are concerned.

Not only that, the LG Miracle will also come with 14.4Mbps HSPA, Wi-Fi a/b/g/n, and Bluetooth 3.0 connectivity, in addition to NFC support. No idea how much it will cost, nor when it will arrive, but hopefully Mobile World Congress that is happening at the end of this month will shed more light on the LG Miracle.