The Heineken® Limited Edition Design Challenge has reached its crescendo, with design student Rodolfo Kusulas from Monterrey, Mexico and freelance designer Lee Dunford from Sydney, Australia being named the winners of the global Facebook bottle creative challenge which attracted over 30,000 entries from more than 100 countries.

To mark its forthcoming 140th birthday, Heineken launched an innovative global mission through its Facebook page inviting budding designers to design a bottle for its Limited Edition anniversary gift pack. The ‘connections’ themed brief asked people to create a design that symbolises how people will connect in the next 140 years and pair it with another through the online gallery. Designers connected with each other to enter the competition together, pairing creative strangers in a global network of creativity.

The winners, who connected more than 9,000 miles from Mexico to Australia, were amongst six finalists that were given the chance to perfect their design and present it to the judging panel, made up of Evan Orensten – Co-founder and Executive Editor of Cool Hunting, Mark Dytham – Co-founder of global creative network, PechaKucha and Mark van Iterson – Global Head of Design, Heineken.

“The standard of all three of the finalist designs was incredibly high – each of them could have been winners,” noted Mark Dytham of PechKucha. However Evan Orensten of Cool Hunting was a particular fan of the star-studded winning design. “I really liked this bottle – it’s striking if you glance at it, but if you take the time to really look at it and see what’s going on it’s a really considered and impressive design.”

Mark van Iterson at Heineken was very impressed by the duo’s winning design. “Social connectivity was the inspiration behind Heineken’s brief to create a design that will mark our 140th year. Through a pioneering design process using digital space to unite creative talent from all around the world, Lee and Rodolfo have created a premium visual concept that summarises how our world communicates through time. The way the design shifts the continents to create one world, in combination with the Heineken star as a planet in the centre of a galaxy unites two strong perspectives on a similar idea – the collaboration through the visual language of the design was obvious.”

Lee and Rodolfo were complete strangers when they entered; they simply connected through the similar elements in their creations. Stars are a prominent part of the design and feature on both sides of the bottle. Their creation together with their names will appear on a Heineken bottle that will be sold in an exclusive Limited Edition gift pack around the world from December 2012. Both agree that it is an incredible opportunity to have their designs enjoyed by millions of people around the world.

“It’s absolutely amazing to think that this design will get made,” says Lee. Rodolfo is equally excited. “To have something that will be distributed around the world with my name on it is just amazing. I’ve got goosebumps just thinking about it. I can’t even express how excited I am.”

Next year’s Limited Edition challenge will launch December 2012. See yourfuturebottle.com from December 6 2012 for details and the new design brief. 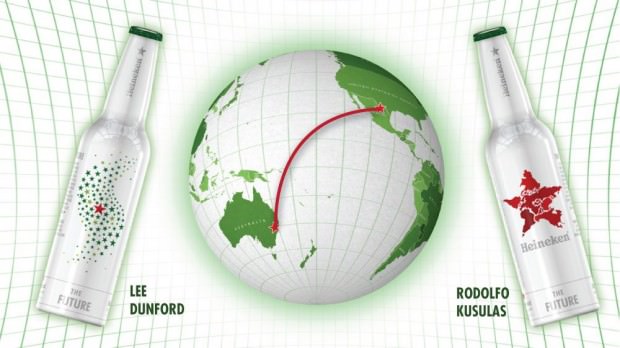