Throughout its 73-year history, the VW Beetle has embodied VW’s “people’s car” philosophy, the original Type 1 becoming more than 21 million people’s car before production finally ceased in Mexico in 2003.

When it came out in 1998, the retro-themed New Beetle was a breakthrough. No one had actually put a full-blown retro remake into production before, but the New Beetle’s initial success encouraged many others to follow VW’s lead. Now everyone seems to have an opinion on the best way to do it. 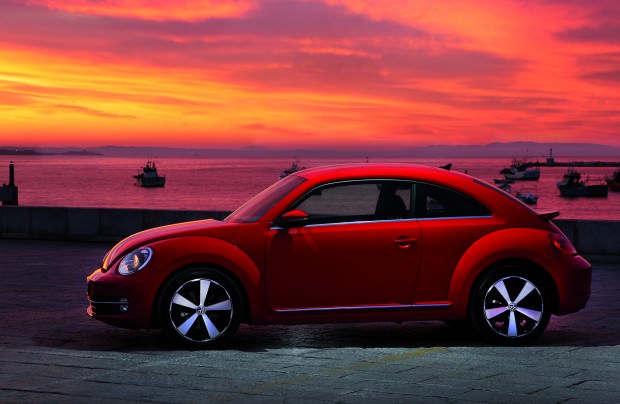 But how do you remake a remake? Volkswagen’s design team went back to the original VW Bug source material and took another crack at it.

Thankfully, in designing this generation of Beetle, VW started with the right priority: Reshape the car so it will appeal to more than just people who loved it before. Gone is the syrupy-cute, large-bubble-eating-a-smaller-bubble look, gone is the Astrodome roof line, gone is the push-me pull-you front-to-rear symmetry.

In its place stands a profile much closer to that of the original. The roof is flatter on top, with a peak that’s shifted rearward to improve the headroom for rear-seat passengers. Indeed our 6-foot 2-inch test pilot actually fits in the backseat now without need to cant his cranium like a confused collie. Rear hatch space has been expanded to 15.4 cubic feet, a 28 percent increase. 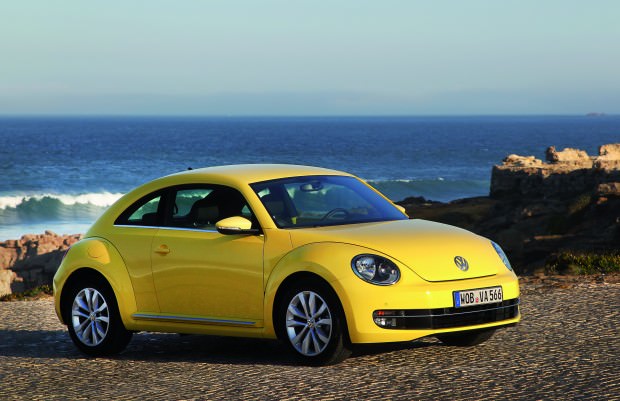 The result is larger than its predecessor and spectacularly retro. It is far more faithful to the original than the previous Beetle, right down to the wheel designs and delightful ’70s brown paint.

Volkswagen says 60% of Beetle buyers for the past several years have been women, and the new model is designed to even out the figures or swing them more to the male side. Ads for the new car have touted its increased sportiness and manly appeal with tag lines like “It’s a boy.” 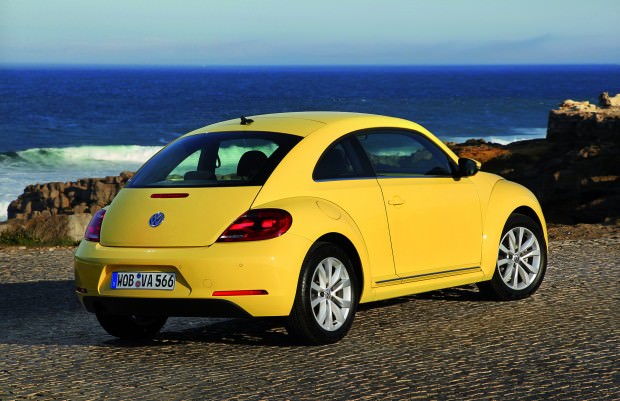 There are important practical implications for the new shape in addition to the obvious aesthetic ones. the Beetle’s interior still offers a spacious front seat.

Assuming all are average size, a quartet of adults can comfortably ride in the Beetle—although those much loftier than average height will find their foreheads locked into a cutout in the trailing edge of the headliner. 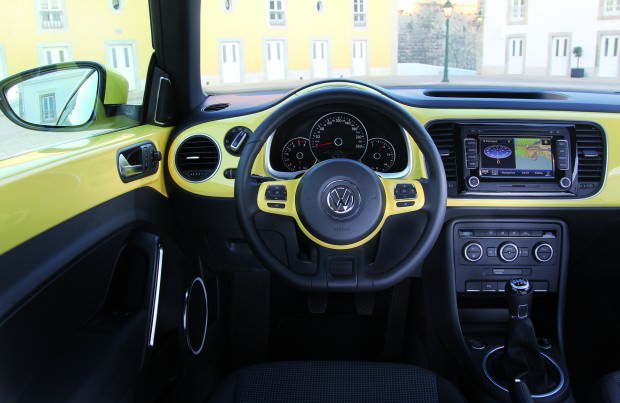 The Beetle’s interior proved to be a pleasant surprise. Instead of the stuffy, dark interiors common to German cars of most stripes (Audi excluded), the VW was as bright as an amusement park! Smack in the middle they’ve integrated something the New Beetle never had — a navigation system. It’s available with the Sunroof, Sound and Navigation package. The “Sound” part refers to a Fender-tuned stereo with 400 watts, eight loudspeakers and a subwoofer.

You don’t have to delve this far into the options list to get Bluetooth and a USB/iPod media interface because these will be standard on all Beetles except the Base, a five-speed manual loss-leader variant you’ll likely never see apart from newspaper ads. As for the flower vase, it’s history. Sorry, ladies! 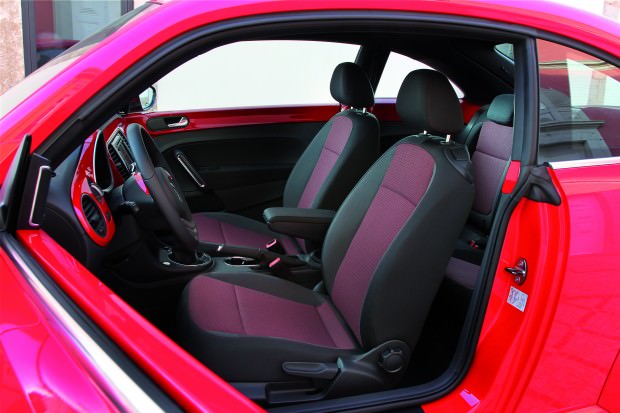 On the road, cornering visibility past that new pillar is vastly improved and there are far fewer dash-top reflections staring back at us in the windscreen. I had road-testing a Beetle this week and so far, all the changes seem to make it better.

The Beetle scoots along nicely, pulling strongly from corner to corner. Volkswagen revamped the Beetle’s suspension, and the difference is noticeable as soon as you turn the first corner, make a hasty U-turn on a side street or drive on a curvy back road. The new Beetle feels agile and athletic compared with its predecessor. It is more of a sports car and less of a cruiser, and is a roomier, more substantial alternative to competing “statement cars” like the Mini and Fiat 500. 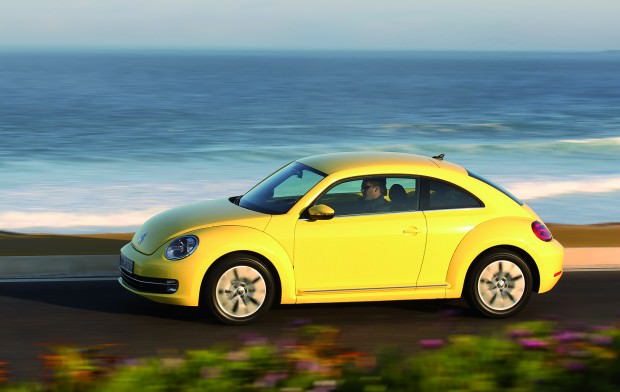 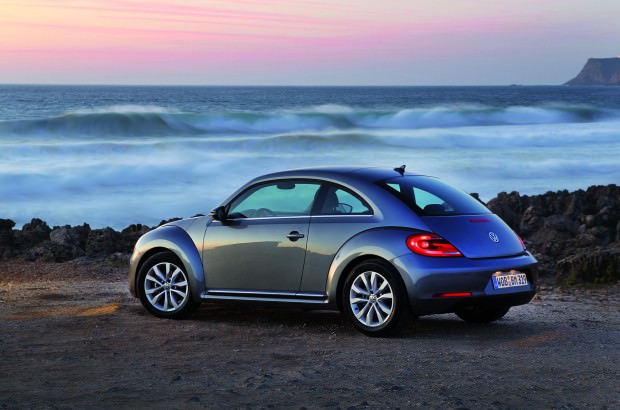 Turbo aside, the entire VW Beetle lineup benefits from the basic philosophy changes wrought by the redesign. More interior space, more equipment and a stable platform is never a bad thing. With lower, wider and more aggressive styling it looks less like a cute toy yet still stands out from the crowd of look-alike compact cars.

Its handling is sharper and more inviting to people who drive with vigor, and the interior is makes much better use of the available space. I really like the new Beetle. Much more than I did its predecessor, even it still may be a girl’s car, it could be my car for years to come, and not only to satisfy my feminine side! 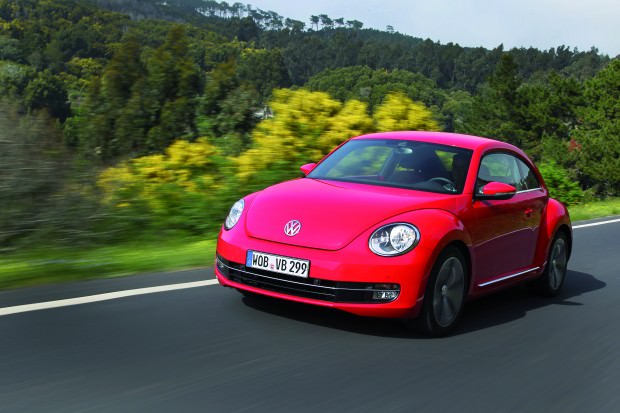