A few months ago, my boyfriend and I decided to free spirits with a trip to Camargue. It was the right time: After a long winter, no spring, and a bit tired of city life, we were dreaming of big wild space… And what could be better that a « close to nature » vacation in the South of France, not far from Marseille and Nimes. Let’s go wild! Lets take a break! Let’s feel the nature!

The Camargue is a triangular area lying on the coast between the Languedoc-Roussillon and Provence. It is a river delta where the Rhône meets the sea – a marshy island bounded by two branches of the Rhône and the Mediterranean Sea. 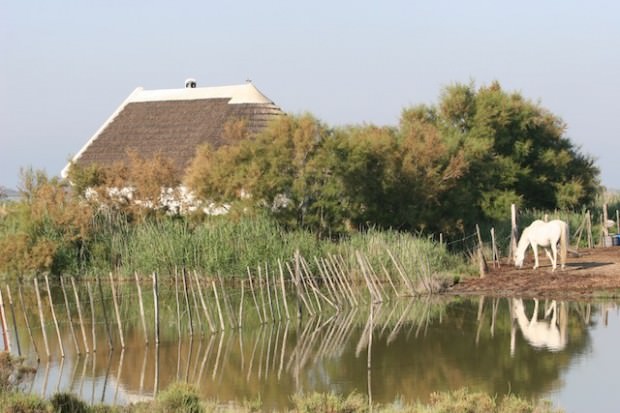 For those who have no idea about what the Camargue is: it’s a huge area (over 930 km²). It’s western Europe’s largest river delta, with exceptional biological diversity, and home to unique breeds of Camargue Horses and Camargue Bulls, and to more than 400 species of birds including Pink Flamingos…

Much of the area is under water – inland salt water lakes, called « étangs ». Approximately a third of the Camargue is either lakes or marshland. The largest of these saltwater lakes is the The Étang de Vaccarès. Established as a national park and nature reserve in 1972, the Parc Régional de Camargue covers 820 km² including some of the wildest and most protected land in Europe. It is a major world heritage wetland.

And the coastline is over 40km long. The Camargue lies within the département of Bouches du Rhône (“Mouths of the Rhône”). In the city of Arles, the River Rhône divides into two branches, the Petit Rhône (Little Rhône) to the west and the Grand Rhône (Great Rhône) to the east. The Petit Rhône flows into the Mediterranean Sea west of Les Saintes-Maries-de-la-Mer, while the Grand Rhône flows into the Mediterranean Sea east of Port-Saint-Louis-du-Rhône.

My friend Anne who lives close to Arles recommended a place at Les Saintes Marie de la Mer: Les Arnelles.
After a short flight from Brussels to Nimes, and les than a 40-min drive, we finally arrived in the charming Les Arnelles…

At the gates of the villages Saintes-Maries-de-la-Mer, the hotel Les Arnelles seems to offer a stay within an exceptional environment. Functioning like a guesthouse, this hotel seems like the perfect place to relax with a change of scenery.

Even the sky was a bit cloudy; the wind was giving us a kick! Our luggage was not yet in our room, we were already planning a ride (don’t be naughty!) on beautiful Camarguese horses… In the sky, some pink flamingos fought by in tight formation, greeting us with a few shrieks. Around the hotel, white horses grazed on the edge of the marsh, covered with reeds. We got the feeling we were close to paradise… 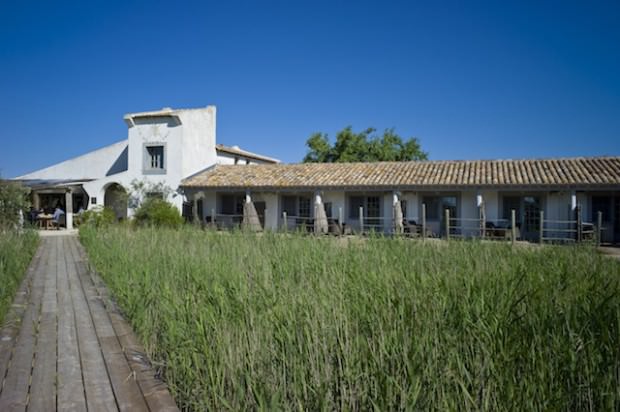 Les Arnelles is an establishment belonging to the “Châteaux et Hôtels Collection” network. Situated 50 meters from the road, the hotel offers a surprisingly silent environment. This hotel reinterprets a Camargue score, but thankfully avoids the clichés. Wood is omnipresent, the volumes of the living areas are restrained, to better maintain the friendly atmosphere that Gérard and Michelle Duguet, the owners, have managed to create.

Here, we’re in a guesthouse spirit, where “the welcome” is everything. What’s more, it’s in this spirit that upon reservation the Arnelles team routinely offers to include dinner with the room. A choice we won’t regret, as the restaurant is more than excellent. 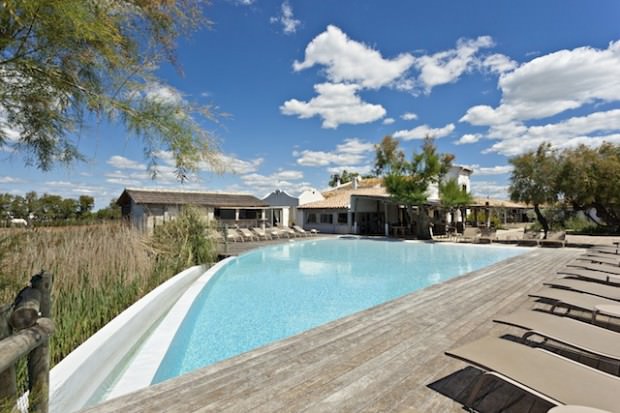 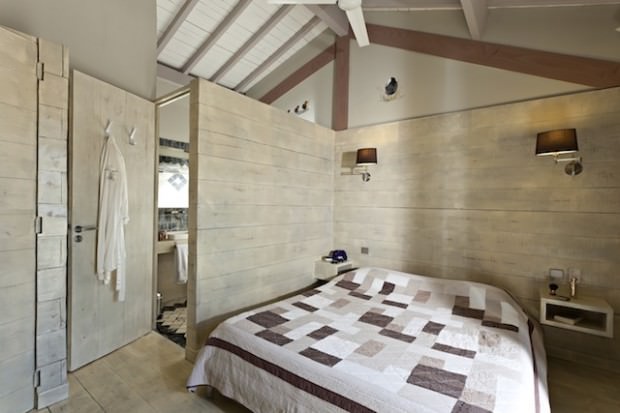 This charming hotel full of character is in total harmony with nature. Each of the fifteen rooms is on the ground floor and reached by a wooden pontoon installed across the marsh. From small private terraces, one can watch at one’s leisure the activity of the horse-riding club adjoining the hotel. The interior design subtly evokes the eternal Camargue, with touches of grey and cream. Near the shady terrace, a lovely pool provides swimmers with a view over a little meadow nearby. 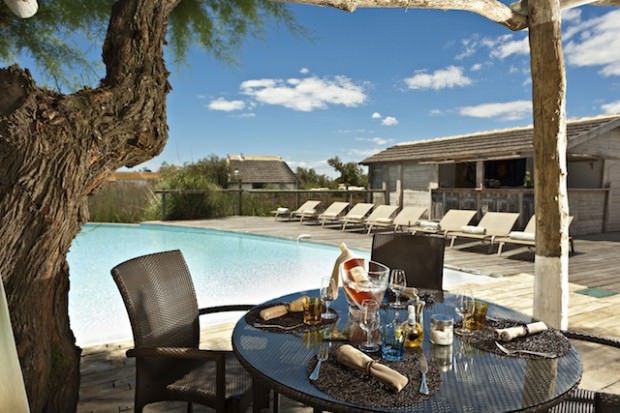 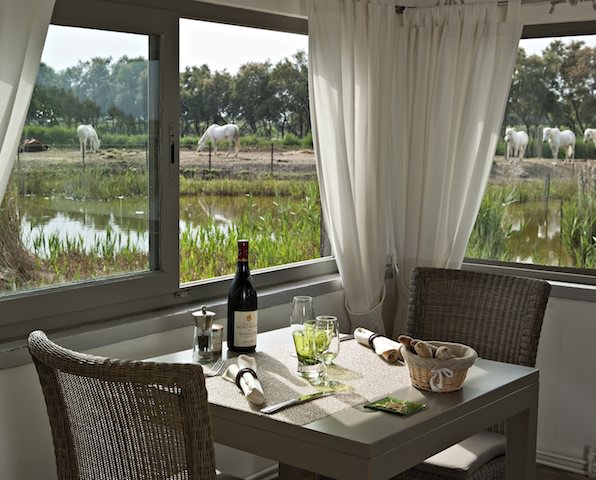 This hotel is an incredibly restful place in exotic surroundings, a true heaven of peace away from the cities’ hustle and bustle, where you can relax and rejuvenate.

The first evening we had one of the best meals ever! Simply sublime: Lamb from the region, cooked slowly with wild rosemary. Incredibly tasty! Gildas Gicquel, the young chef demonstrated creativity every evening in the kitchen, starting from a base of seasonal produce. The service was attentive and faultless, and the headwaiter is a precise and passionate guide when it comes to wine. We discovered some beautiful Languedoc wines I didn’t really know before. The dinner was inevitably enhanced by the view that the large picture windows provided us: all evening we remained captivated by the spectacle of the Camargue horses grazing under particularly well-studied lighting.

After a fantastic breakfast, we decided to go for a ride. We really enjoyed the nature on the back of these great horses walking and running on the wild fields… 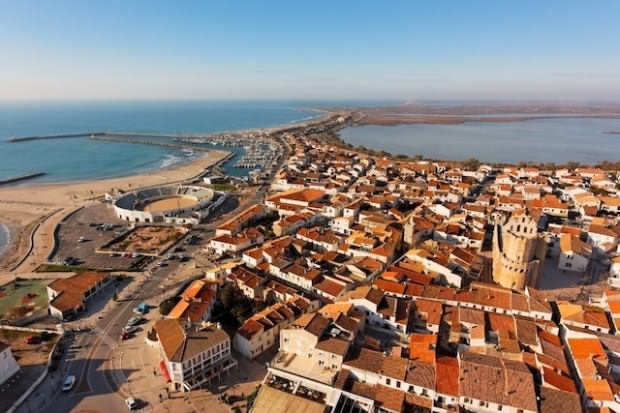 Inside the church, we saw the famous statue of Sara the Black. We also climbed on the roof terrace to enjoy a fantastic panoramic view of the entire town and the Camargue region. The church was erected in the 12th century. A medieval legend told that the “Three Maries” (Mary Magdalene, Mary Salome & Mary Jacobe) and their servant Sarah cast adrift here (actually they were accompanied by Joseph of Arimathea, who had the Holy Grail with him, and who from here travelled to Britain).

When in 1448 relics of Marie Jacobé and Marie Salomé were discovered, pilgrimage to this place developed, so the church had to be enlarged. During the French Revolution the church got severely damaged. It took nearly a century to finish the reconstruction. Meanwhile the village had changed the name from Notre-Dame de la Barque to Saintes-Maries-de-la-Mer. Today this is still a bi-annual major place of pilgrimage for Gypsies (May and end of October). 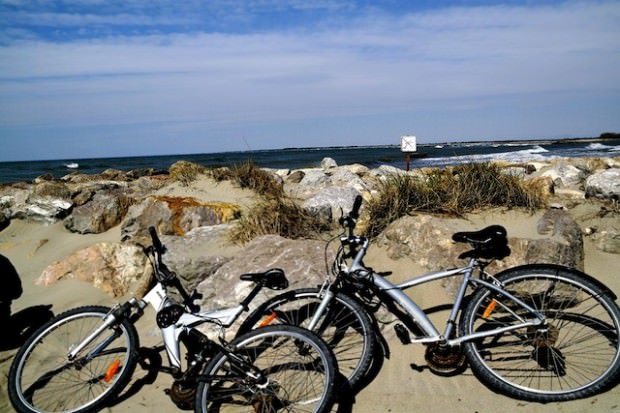 After we followed the coastline with our bikes. The sea was between grey, green and deep blue… Amazing! The wind was blowing a bit, making the bike ride a bit more sportive.
Back at the hotel after our three-hour long bike trip, we fell asleep. We woke up just on time for another excellent and astonishing dinner.

The second day, after a amazing horse back ride in the morning, we spent the afternoon in the Parc Ornithologique de Pont de Gau which is a nature reserve harbouring thousands of birds, both resident and migratory. This wild bird sanctuary is the ideal location to view hundreds of pink flamingos, the emblematic bird of the Camargue. Formerly threatened with extinction, the pink flamingo is today well established in the region, though it remains a fragile species, easily disturbed by human activity. 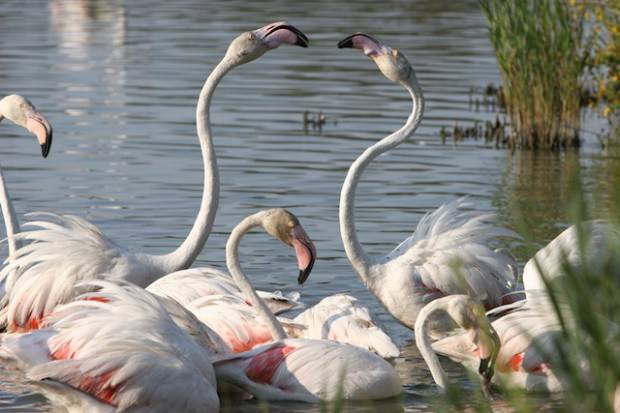 The last day, we were invited to spend the day at the Manade des Beaumelles, but that story I will tell you on another occasion. For those who don’t know a manade is, it’s a free running group of bulls, cows or horses managed by gardians. 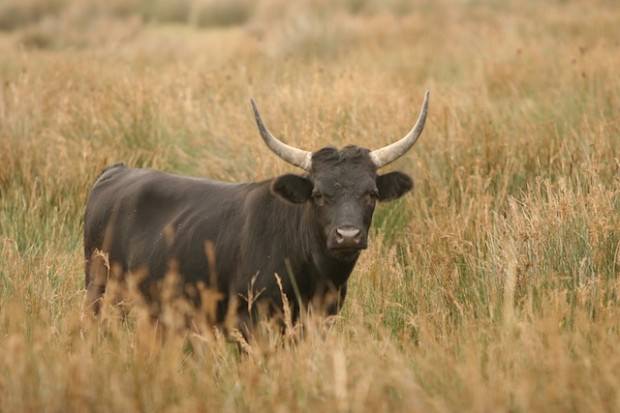 Don’t hesitate to plan a trip to this delightfully preserved area. Notice that in all seasons Les Arnelles offers packages including two or four nights, dinner and breakfast, allowing one to sample with joy the charms of a stay in the Camargue. And we really loved that stay! Already planning to go back!