50′ to denounce the indoctrination, that moment of extreme vulnerability and fragility that makes us switch. Inspired by a distant family history Fabrice Murgia attacks on sectarian aberrations and attempts to understand its mechanics and effects. 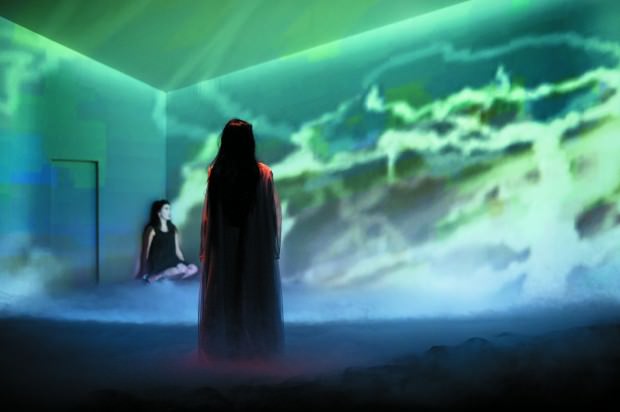 The young director tells us about the destiny of a grandmother devastated by the death of a child who believed she could find solace in the sect of Jehovah’s Witnesses. Twenty-five years later, his son met a woman who refused to join the movement and saw himself banished from his family.
The journey:

The scene opens on a full-screened child’s face. He speaks Italian, he speaks the language of a child sharing with disarming insurance his first feelings of love for a girl he kissed, the girl he sees at his side in a beautiful and successful life where he has a house and a pool, a job and his share of sensual moments … it’s all there, in the words of an Italian child who sees it simple what adults see complicated. I am conquered, I smile … and the child’s face disappears.

Without transition, alone on stage, a woman – Italian as well – is facing the audience. She wears a dress suit. She narrates her arrival in Belgium with her husband to find a new life in there near the coal mines. She is the so-called Nonna Giulia. She wears her history, her drama, her now deceased child, she is expressing a history of exile and drama, a family destiny under the beliefs and predictions from the Witnesses.

In the background, another story plays, her daughter’s. The young woman addresses to her absent brother via camera. She’s trying to convince him to join her on her marriage but also to reintegrate into the community of Jehovah’s Witnesses that he chose to leave years earlier. She shows him pictures of the time when they were together.

And the walls of the house gradually disappear, and the door, yes the door opens on a “yes.”

Very quickly, I feel like marble, almost frozen inside facing this stark scene where hover in the air the words of a language I do not speak, a language I have learnt not to listen to … everything is airtight, the trap is closed, leaving me alone outside, on the other side of the wall. I tried to enter, to understand, but I couldn’t…I am uninvited. I need an escape.

The face of the playwright appears then, cast onto the wall.

He tells the narrative of a family, he tells the narrative of his family, the one in the story, that one in the real life … and then taken by some anxiety and sadness, the audience and I switch from hermeticism to testimony, and here we urge to the surface to breathe deeply the air we need, the one outside of the box. And then one realizes that we were already outside as free beings.

We were already out and we didn’t realize it.

Then, at that very moment, I recall the words of the child at the beginning saying that adults always complicate everything… I smile again, but not in the same way.

The text is not always the first element in Fabrice Murgia’s drama.

Video is a one of the full-fledged protagonists forging an ongoing dialogue between the stage and the set. It is narrative, sensory, beyond description, it is action, witness and testimony, bringing to Murgia’s works that extra layer of mystery.

But be careful for the real play takes place in your head, and reveals itself at the light of your own experience and life.

With “The Children of Jehovah”, the director succeeds in by directing a trio of actresses performing fair and powerful and by controlling an impressive mechanical technique to plunge the audience into a true awake dream-nightmare. The public will contemplate the scene unfolding in front of him, stomach knotted, eyes fixed on that dark theatre stage, over which hung the threat of indoctrination and self-deception.

In his sublime Ghost Road staged a month ago in this same theater, Fabrice Murgia took us on a road trip in the United States, a road lined with ghost towns and ghost characters. In “The Children of Jehovah” it is the journey that comes to us.

“May I come in?” – says one of his protagonists. Some journeys are not ours, it is sometimes good to have chosen other paths.

• Educated at the Liège Conservatory, he worked as an actor in theater, film and television.

• Today he is primarily as a writer and a director. He’s also founder of the Artara Co, a set of performers, filmmakers, visual artists and musicians, gathered around his creations – aiming at testify about the world with fresh language of their generation.