An electrifying encounter between the internationally renowned fashion designer Jeremy Scott and the smart fortwo electric drive has produced a fascinating smart fortwo.
An electric car, ready for lift-off into a new era of mobility – full of lightness and joie de vivre. The unique smart forjeremy has wings – a familiar trademark of the American star designer. The wings light up like igniting rockets to form avant-garde rear lights. T
he smart forjeremy showcar, which will be launched next year as a limited special edition, was unveiled on the eve of the LA Auto Show at Jim Henson Studios in Los Angeles, with music provided by the artist M.I.A… 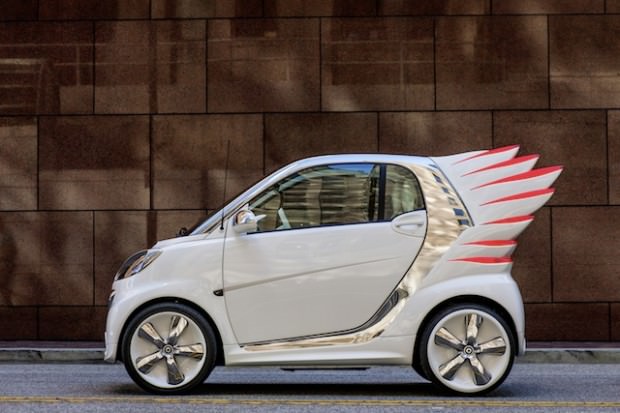 True to form, the cooperation itself was out of the ordinary, smart being the first car brand to permit a fashion designer to make changes to the vehicle’s body.
Wings are one of the recurring design elements used by Jeremy Scott to great effect. Be it sweatshirts, sunglasses or sneakers, winged motifs crop up again and again in his collections.
“For me, wings mean freedom, a sense of weightlessness. Because of this, I definitely wanted to have them for the smart electric drive in order to convey the way it frees the environment of noxious emissions and symbolises the new lightness of mobility”, explains Jeremy Scott, who, in addition to his fashion collections, also creates unique costumes for pop stars such as Lady Gaga, Madonna, Katy Perry and Rihanna. 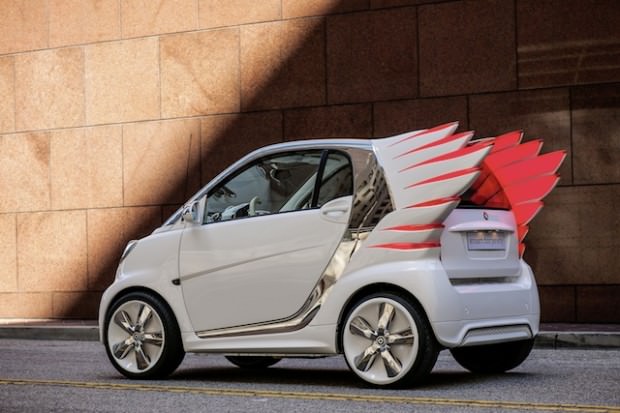 The smart forjeremy is painted in bright white, against which the chrome-plated tridion cell glistens like a jewel. On either side of the vehicle is a wing made of transparent fibreglass and decorated with rocket-shaped elements that light up red, serving as rear and brake lights.
“Transparency was a very important factor for me, since it represents lightness and space”, explains the designer. 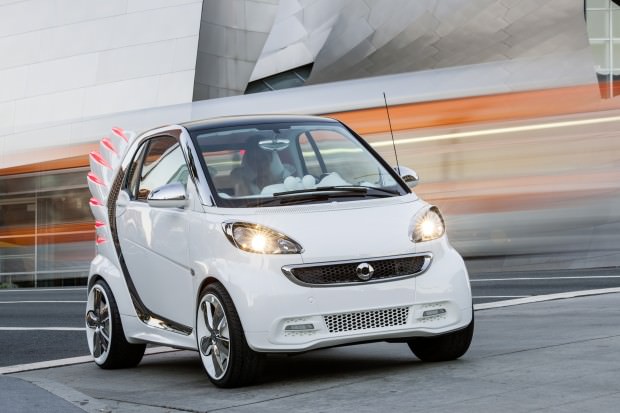 The vehicle’s dynamic, self-assured look is further enhanced by means of wider rear tyres and wider rear wheel arches. The wheel rims are shaped like aeroplane propellers, giving the impression that the electric smart might take off at any minute.
With the elegantly curved “eyebrows” above its front headlights, the smart forjeremy conveys both untamed curiosity and unbridled joy. Complementing the tridion cell, the eyebrows are bright chromium plated, as are the top half of the mirror caps and the frame around the radiator grille. 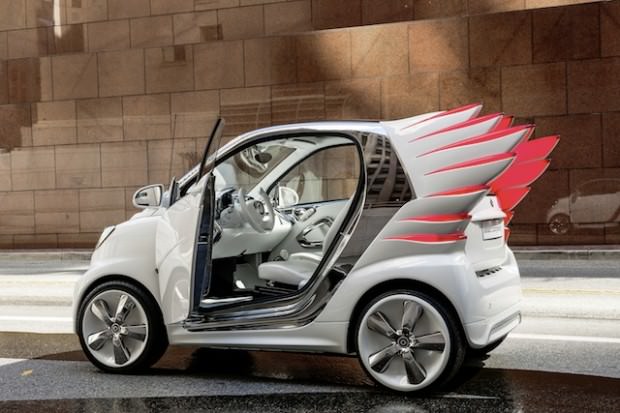 The exclusive and elegant marriage of white and glistening chrome accents is continued in the interior of the vehicle, creating an undeniably luxurious look. Jeremy Scott chose fine white nappa leather for the instrument panel, seats and door trim.
Whilst the instrument panel features minimalist seams, the seat insert areas and the centre panels in the doors boast extravagant diamond stitching. The gleaming chrome surfaces of the main door trim and typical smart elements such as the closing handles, the side boomerangs of the instrument panel and the characteristic rings on the dashboard instruments form an elegant contrast to the matt white. 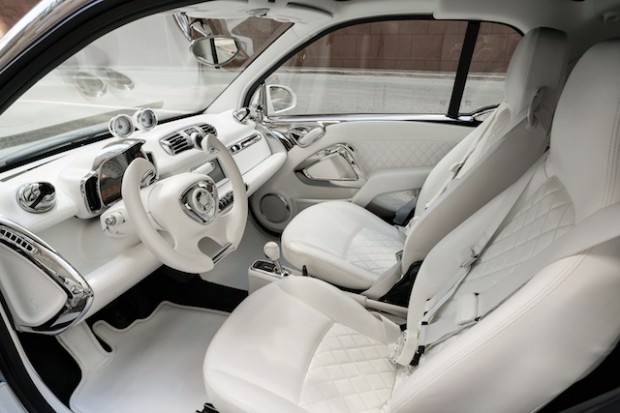 Shaped like a jet engine, the bright chromium plated side air inlets complete the wing theme on the exterior. The white steering wheel with two chrome spokes is open at the top, further enhancing the sporty, sweeping impression of lightness. 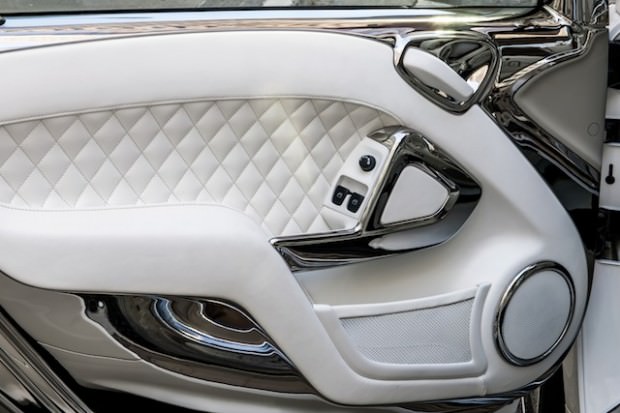 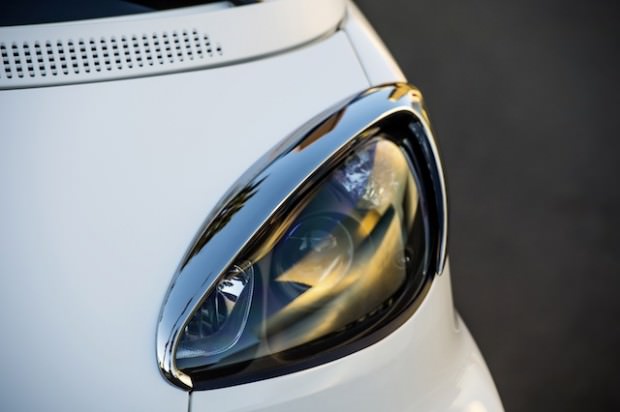 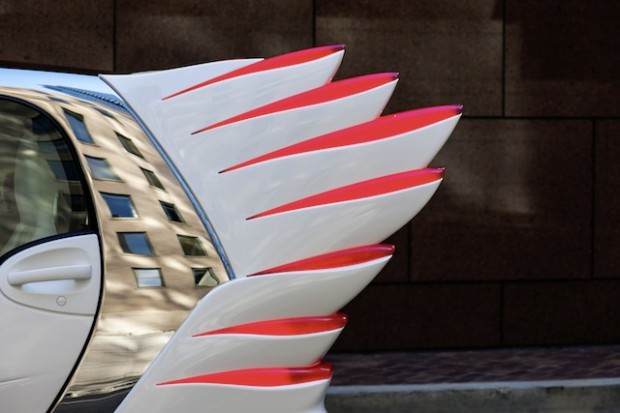 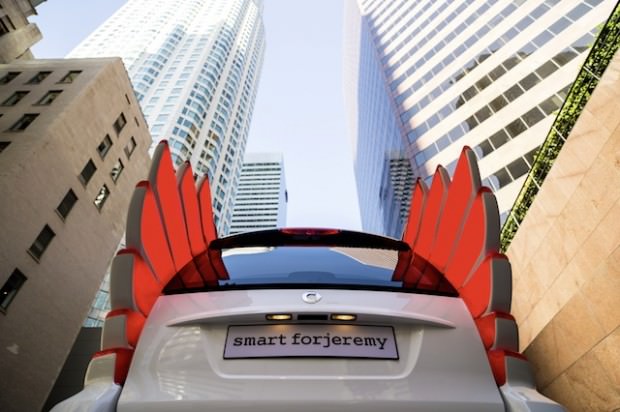 The smart forjeremy is based on the current production version of the smart fortwo electric drive. With its 55 kW electric motor the smart fortwo electric drive accelerates from 0 – 60 km/h in 4.8 seconds, and with a maximum speed of 125 km/h driving pleasure is also guaranteed on urban motorways.
The 17.6 kWh lithium-ion battery enables the urban two-seater to travel approximately 145 kilometres in city traffic without producing any local emissions.