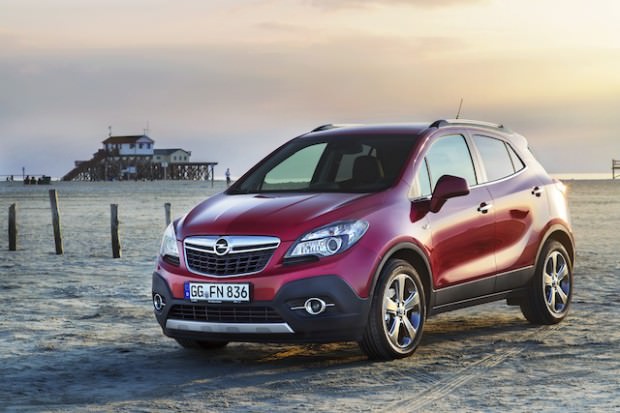 Another test drive from me. This time I have the new Opel Mokka to drive. Mokka has just arrived on the market. The model is the first B-segment SUV from Opel, though it is definitely not the first off-road offering from the GM-owned brand (think of the Frontera and Monterey in the 90s, or the Antara, a sporty crossover which came out in 2006).

The Opel Mokka blends functionality and a comfortable, high seating position with a flavor of adventure. One of the main focal points of the Mokka’s development was the chassis which was designed and fine-tuned in Germany. 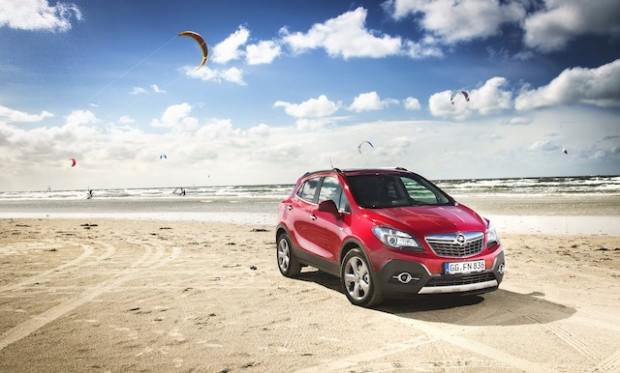 The Mokka presents itself as a global car, able to meet different tastes and driving habits. For these reasons Opel came up with a pretty versatile car that, thanks to its four-wheel drive, can be used in cold climates and on dirty roads, just as good for commuting as for leisure travel.
The model will come with three different engine options and will be made available in a front-wheel drive configuration as well. The Mokka measures 4,278 mm in length, 2,038 mm in width (including side mirrors) and 1,646 mm in height, let’s discover it in detail after the jump.

The Opel Mokka blends functionality and a comfortable, high seating position with a flavor of adventure. One of the main focal points of the Mokka’s development was the chassis which was designed and fine-tuned in Germany. The Mokka chassis has been tailored to the daily needs of European customers and is also very suitable for off-road conditions. 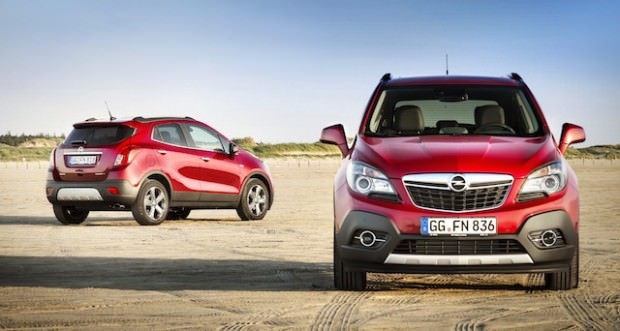 The new Opel SUV reflects the traditional strengths of the brand: driving dynamics, flexibility for everyday life and emotional design. With the Mokka, Opel’s design philosophy of blending “sculptural artistry with German precision” finds a new expression in a compact SUV.
The Opel Mokka displays a bold attitude with sculpted and elegant traits while retaining a sporty edge with muscular and athletic body lines.

At the front, the skirting around the bumpers and solid looking fog lamps emphasize the SUV traits of the Mokka. Protective cladding around the bumpers and wheel arches are energized by Opel’s typical “blade” light catcher on the body side that sweeps upwards to the rear.
The fluid design execution creates flowing and dynamic look. Upper trim levels benefit from chrome window inserts as well as door handles adding an extra upmarket touch. 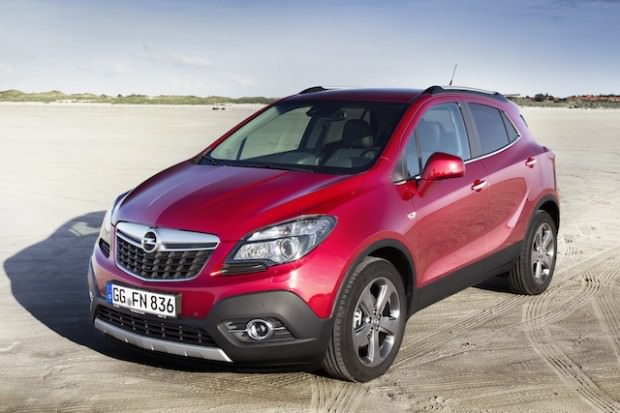 At the rear, the Mokka has skid plate in polished aluminum finish, displaying its SUV credentials in a stylish way. The rear window with its fluid shape is combined with a spoiler at the end of the roof and distinctly shaped tail lights that have defined edges.
All of these elements underscore the sporty and dynamic nature of the Mokka. However, they also help to enhance the aerodynamics of the vehicle. Roof rack panels emphasize the almost coupé-like roofline of the Mokka, adding to its unique appearance.
There is a broad offer of ten exterior paints including solid, metallic and three-coat premium colors.

Another outstanding element in its segment is the Opel exclusive FlexFix bike carrier system that is fully integrated and always on board. When not in use it is stored in the rear bumper, so that the Mokka’s design can be fully appreciated. 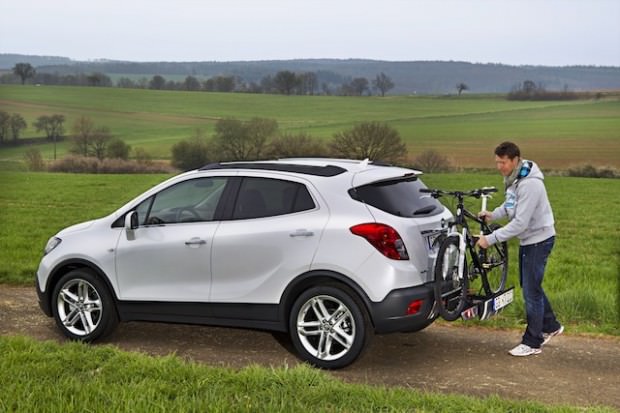 INTERIOR
In the interior, the new Mokka also reflects Opel’s typical sculptural design DNA which is captured through the signature wing-shaped instrument panel that wraps around the door inserts and the artfully sculpted surfaces in the doors.

Although the Mokka is small on the outside, the interior comes across as belonging to a much larger upmarket vehicle. Such components and finish, subtle fine chrome accents that are sensitively surfaced all add to the high quality feel. For example, center chrome rings and chrome dividers give a technical, modern impression.

With up to 1,372 liter of loading space and up to 19 storage locations including side pockets at the front that can store 1.5 liter bottles, the functional needs have been clearly accounted for. 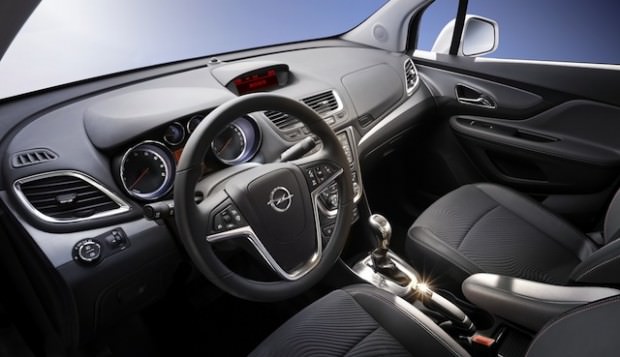 Thus the Opel Mokka fulfills all the requirements of everyday life and is just as suitable for weekend pursuits. But you still can add some optional extras and Opel exclusive technologies like the Opel Eye front camera.

Despite its measurement, the Mokka generously accommodates five people in a commanding position. 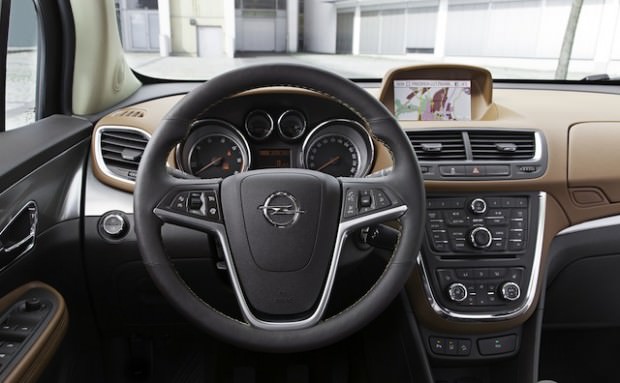 MOTORS
Power is provided by three efficient engines. All manual transmissions are equipped with the fuel saving Opel Start/Stop system. The gasoline offer comprises an 85 kW/115 hp, 1.6 liter naturally-aspirated engine with 155 Nm torque that uses 6.5 liters of fuel on 100 kilometers and emits 153 g/km CO2 and a 103 kW/140 hp 1.4 l Turbo with 200 Nm of torque. The 1.4 Turbo will initially be available with the same manual transmission but later on also with automatic transmission. The manual six-speed 4×4 turbocharged Mokka reaches a top speed of 190 km/h. Acceleration from zero to 100 km/h can be achieved in 9.9 seconds. The fuel consumption in the combined cycle is 6.4 l/100 km, equivalent to 149 g/km CO2.

Customers who prefer diesel engines can order the Mokka with a 1.7 liter turbocharged CDTI unit with 96 kW/I30 hp and maximum torque of 300 Nm. This engine unit is available with six-speed manual plus front or all-wheel drive, or as a six-speed automatic with front¬ wheel drive. As an FWD with a manual gear box the diesel unit only needs 4.5 liters of fuel in the combined cycle per 100 kilometers. This is equivalent to 120 g/km CO2. The 1.7 CDTI is thus one of the most fuel efficient vehicles of its segment. The performance figures speak for themselves: with a six-speed manual gear box and front-wheel drive the Mokka achieves a top speed of 187 km/h. A sprint from standstill to 100 km/h only takes 10.5 seconds.

DRIVING
The ride is comfortable and the performance is not bad at all, even in difficult road conditions. When the road surface is dry, the front wheels drive the vehicle forward which means that fuel consumption is kept low. Depending on the road conditions the range varies from 100 percent front-wheel drive to a maximum distribution of torque of 50 percent on the front and rear axle, for example when the roads are covered in a thick film of water. When requires it, the electronic torque transfer device (TTD) automatically and seamlessly sends torque to the rear wheels. The AWD system further sharpens the already agile handling characteristics of the Mokka. 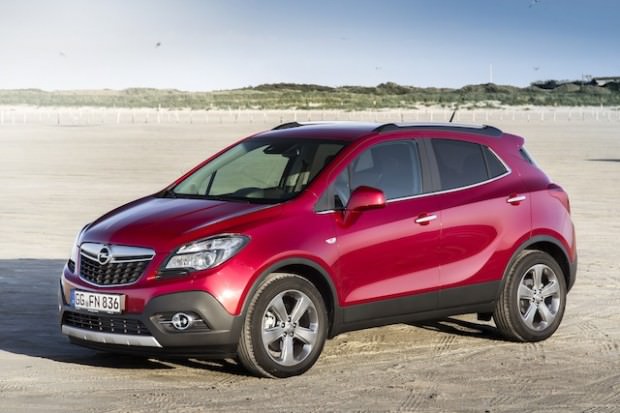 This especially noticeable when the car has to take off quickly or negotiates corners at higher speeds. It is activated automatically within a fraction of a second as soon as there is wheel slip due to a lack of traction. The system also realizes when no AWD is required. It offers even better handling performance in bends and provides maximum traction in those situations. The AWD system with all its components only weighs 65 kilograms so that the car remains efficient and environmentally friendly.

The test car (Mokka 1.4 turbo ecoFlex 4×4 petrol) had all common features plus hill descent control, rear camera, navigation with DAB+ radio, AUX and USB connections, start/stop system to save fuel, and a lot more. About the engine, with 0-100km/h in under 10 seconds, it felt fast enough for this small compact SUV. It really was strong on the gas pedal. In lower gear you really felt acceleration a bit.

Even with 4×4 and descent control, and the off-road look of this car, it’s not meant for real off-roading beacuse the high ground clearance of the front is not so high but it was lot of fun to drive it!

If you opt for the Mokka, you are making a conscious decision in favor of a sub-compact SUV model rather than a larger SUV. This means that you are choosing a car that is just the right size for urban environments, while also balancing the need to engage in everyday activities with weekend pursuits.

The good thing was in the no-ending winter that I had a small snow-capable, semi-offroader with a fast attitude and I really like it.