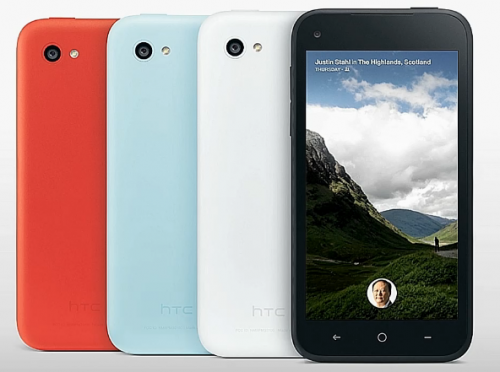 [/wide]HTC and Facebook have just announced the First, the first Android-powered phone that will come pre-loaded with the new integrated Facebook.
Despite its name, the First isn’t the first device that Facebook and HTC have partnered up on — back in 2011, HTC released the ChaCha, Status, and Salsa, all of which had special Facebook integration. But the First comes with Facebook’s new Home launcher out of the box, offering a much richer Facebook experience than the earlier efforts.
The First will come in four colors: red, light blue, white, and black.
It features a 4.3-inch screen, 5.0 megapixel rear-facing camera and 4G LTE. Below the display are three capacitive buttons, and the overall shape is a generic rounded rectangle with cameras on the front and back. It is powered by a dual-core Qualcomm Snapdragon 400 processor clocked at 1.4GHz and paired with 1GB of RAM. It also has 16GB of internal storage and a 2,000mAh battery. Its rear camera is a 5-megapixel unit with an f/2.0, 28mm lens, while the front camera is a 1.6-megapixel sensor.

Fully optimized for Facebook Home, the HTC First will be available for $99 USD with a two-year contract exclusively from AT&T beginning April 12. Facebook CEO Mark Zuckerberg says that the device will also be released on Orange and EE in Europe, though a release date was not provided.