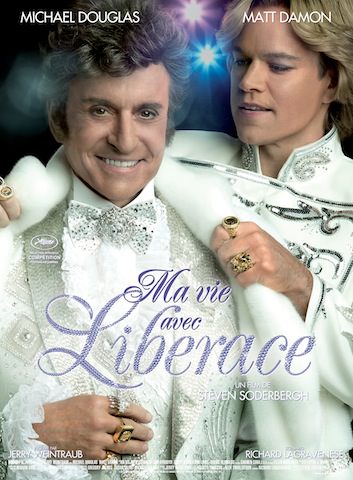 Before Elvis, before Elton John, Madonna and Lady Gaga, there was Liberace: virtuoso pianist, outrageous entertainer and flamboyant star of stage and television.

A name synonymous with showmanship, extravagance and candelabras, he was a world-­renowned performer with a flair that endeared him to his audiences and created a loyal fan base spanning his 40-­year career.
Liberace lived lavishly and embraced a lifestyle of excess both on and off stage.

In summer 1977, handsome young stranger Scott Thorson walked into his dressing room and, despite their age difference and seemingly different worlds, the two embarked on a secretive five-­year love affair.

“BEHIND THE CANDELABRA: My Life with Liberace” takes a behind-­the-­scenes look at their tempestuous relationship from their first meeting backstage at the Las Vegas Hilton to their bitter and public break-up. 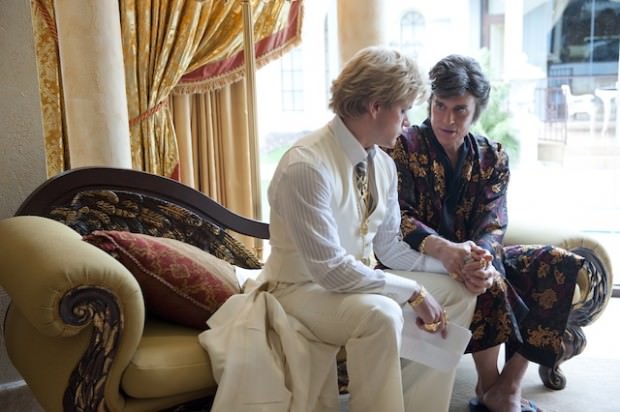 When producer Jerry Weintraub received a call from director Steven Soderbergh asking his thoughts on Liberace, Weintraub responded with unbridled enthusiasm, noting, “First of all, I knew Liberace and thought he was an extraordinary character way before his time. Secondly, when Steven is interested in doing something, I am immediately interested because he’s my favorite director.” 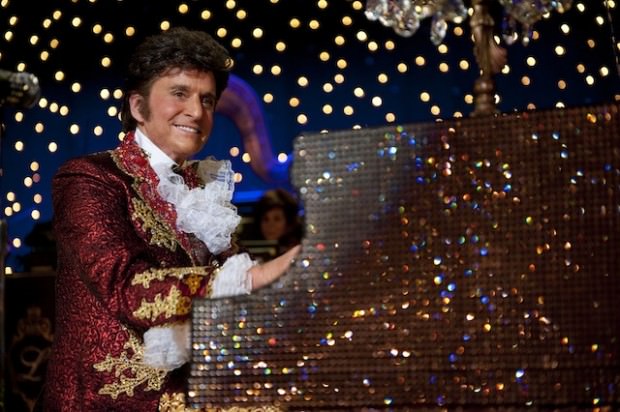 Soderbergh was working with Michael Douglas on “Traffic” some thirteen years earlier and the actor recalls: “Steven suddenly said ‘Have you ever thought about playing Liberace’and I thought, ‘Is he messing with me?’”

Soderbergh admits: “I don’t know why that popped into my head, but Michael immediately launched into an impromptu impression of him that was excellent.” Their interest piqued by the spot-­on performance, Soderbergh and executive producer Greg Jacobs started searching for a Liberace story. 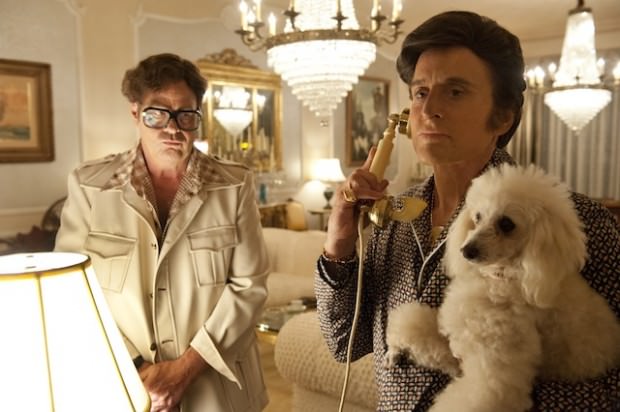 Soderbergh was struggling with the framework. “I couldn’t find a way in. I didn’t want to do a traditional biopic and I didn’t know what the angle was. I told a writer friend of mine that I really wanted to do a Liberace project and I just didn’t know what the approach was and he said ‘You’ve got to read Scott Thorson’s book, Behind the Candelabra’. I said ‘that’s the best title I’ve ever heard’ and I read it and I thought ‘Now I know the way to get in – it’s got a finite period of time that we’re dealing with.’”

They took the idea to Weintraub and reached out to “Ocean’s Eleven” alumnus Matt Damon to come on board in the role of Thorson. Oscar® nominee Richard La Gravenese was brought in to write the script. 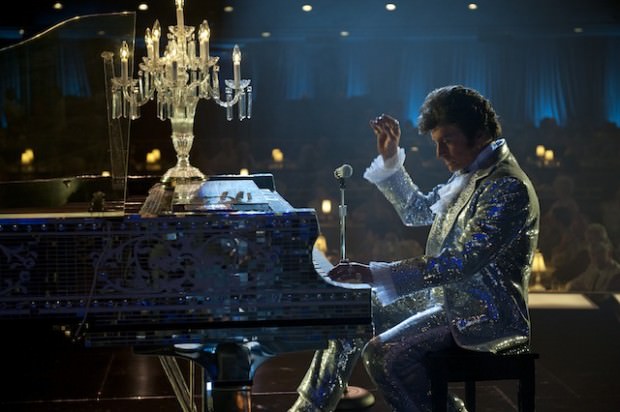 Says Soderbergh, “It’s important that people understand that Liberace wasn’t a goof. He was a seriously talented, proficient musician. He was a real showman. That kind of ability is rare and it’s important that audiences recognize that – otherwise, it just becomes a cartoon, if you don’t take it seriously. He was really amazing. 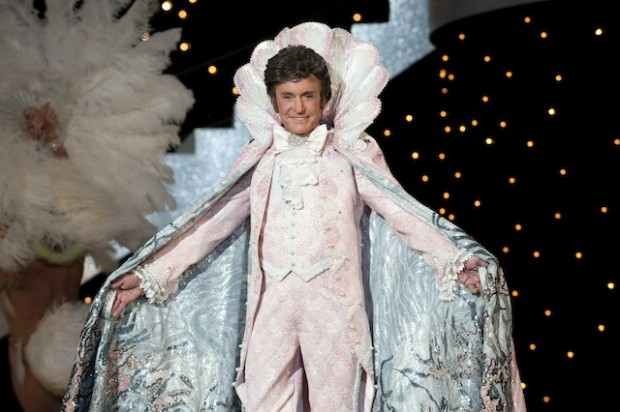 “One of the aspects of the book and the story that appealed to me was that, at a certain point in the film, the discussions that they’re having are discussions that every couple has. And what’s unusual about it, obviously, is the environment in which these discussions are taking place. But we take the relationship seriously, because my feeling, based on the research we did, 7 indicated that it was a real relationship and it was, up to that point, I think, the longest relationship Liberace had had. I was very anxious that we not make a caricature, either of theircharacters or of the relationship.” 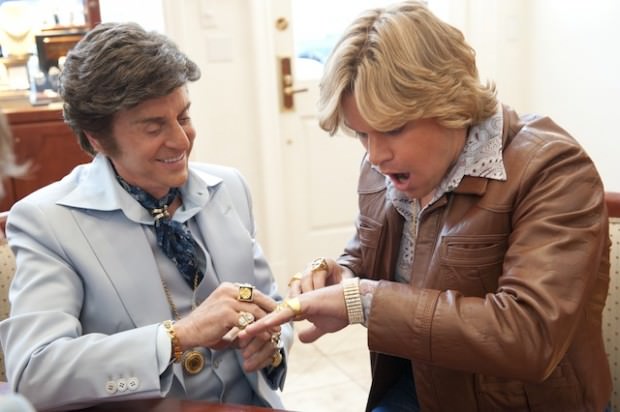 Weintraub credits Soderbergh for being the kind of director who attracts high-­calibre actors to a film. Dan Aykroyd, Scott Bakula, Rob Lowe, Tom Papa, Paul Reiser and the indefatigable Debbie Reynolds lend their talent to the cast of characters. “Soderbergh is a sought-­after director by actors. They want to work with him because he gives them so much,”explains Weintraub. “He’s just so good with the actors because he’s right there with the camera, he’s right in their face, and they know he gets it.”

Rob Lowe, who plays the infamous plastic surgeon Dr. Startz, is full of praise for Weintraub’s own contribution to the project. “Hollywood was a better place when there were more Jerrys – he is still relevant, still on top of his game. He loves movies with a passion. There was no reason Jerry needed to be on this set every day, but he was there at the beginning and he was there at wrap. He has done and seen more than you, me or anybody in the movie has everthought of and forgotten more than we’ll ever know. He is there and he is in it to win it – he istruly inspirational.”

Shot in Los Angeles, Palm Springs and Las Vegas, BEHIND THE CANDELABRA is enriched by the authenticity of the filmmaking itself. Many of the locations, sets, costumes and props were connected directly to Liberace. The production filmed in Liberace’s L.A. penthouse; in the United Postal Center in West Hollywood, where Scott Thorson worked following the break-up; in Our Lady of Solitude Catholic Church, where Liberace’s Palm Springs funeral service was held; and on the stage and in the showroom of the LVH, the former Las Vegas Hilton, where Liberace used to perform.

Behind the Candelabra: My Life with Liberace premiered at the 2013 Cannes Film Festival on May 21, 2013 and competed for the Palme d’Or. It aired on HBO on May 26, 2013 and was given a cinematic release in the United Kingdom on June 7. It will be on screen from 17th September in Paris.