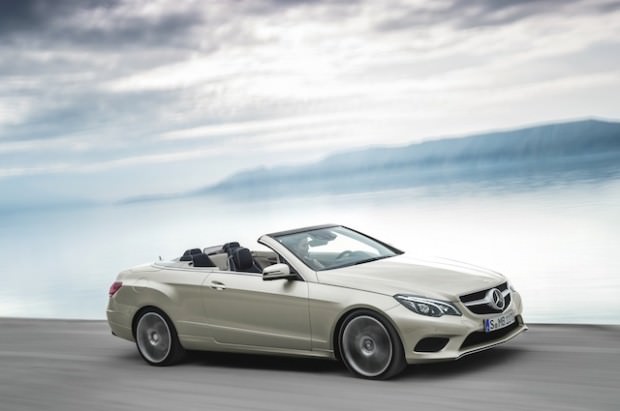 [/wide]
Did you drive already the 2014 Mercedes-Benz E-Class Cabriolet ?

At first the 2014 Mercedes Benz E Class Cabriolet is a good-looking car, for sure. Those who’ve been waiting won’t be disappointed. The changes aren’t massive, but the exterior revamp, new interior design and color combinations, and Intelligent Drive features raise the finesse quotient when it comes to top-down motoring. 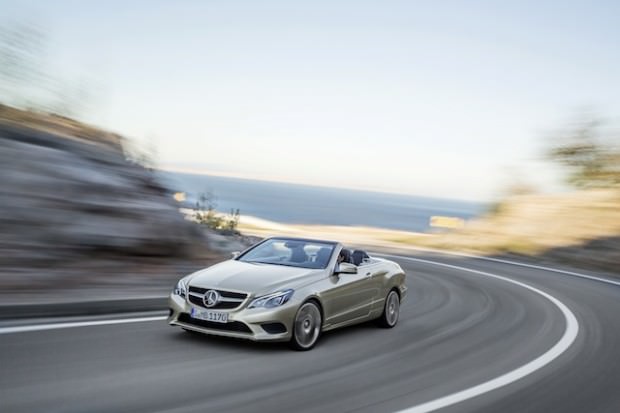 This redesigned model shares a bigger grille, with a large 3-pointed star the dominant feature, LED-rich headlights (now single units rather than the outgoing model’s double units) and maw-like air intakes bookending a front air splitter. The rear gets new taillights and a wide rear bumper with a chrome trim element.

Another line Mercedes-Benz likes to use in connection with the E-Class cabrio is that it’s “the safest place in the sun on four wheels.” Maybe it sounded more elegant in its native German language, but at least it has the ring of truth. The same kind of state-of-the-art safety technology in the revamped E-Class sedan is also available in this car. Highlights include active lane keeping, active blind spot monitoring, active parking assist, adaptive cruise control, rearview camera, cross-traffic assist, driver attention assist, 11 airbags, stereo front cameras and radar sensors. 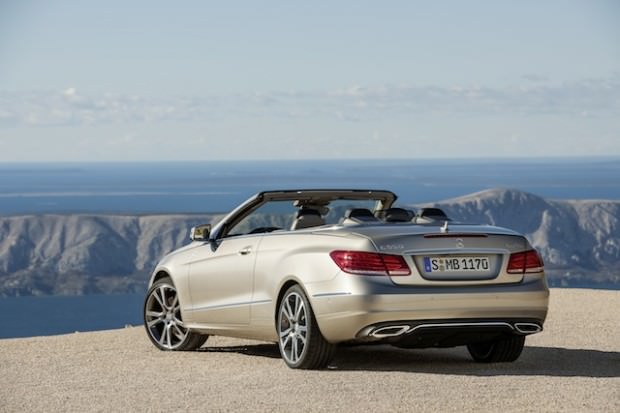 Those stereo cameras, which keep a constant lookout for pedestrians and other hazards, are housed in a unit (prone to hindering visibility, like those angled A pillars) between the windshield and the rearview mirror. That’s part of the price for tech and style.

These cars also have a far more rakish angle to their windshields. As much as the sedan is sensible, the coupe and cabrio are showy. It’s a pretty enjoyable show, too. 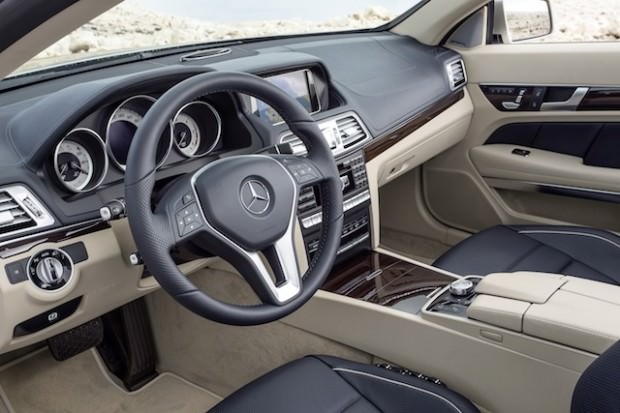 For the interior, the E-Class Convertible gets redesigned air vents and console switches finished in chrome, a new three-spoke multifunction steering wheel with DIRECT SELECT shift lever and shift paddles, and a redesigned center console. There’s even a new analog clock mounted prominently on the center stack, giving a touch of S-Class luxury to a car whose bones are a mutant mix of C- and E-Class bits. 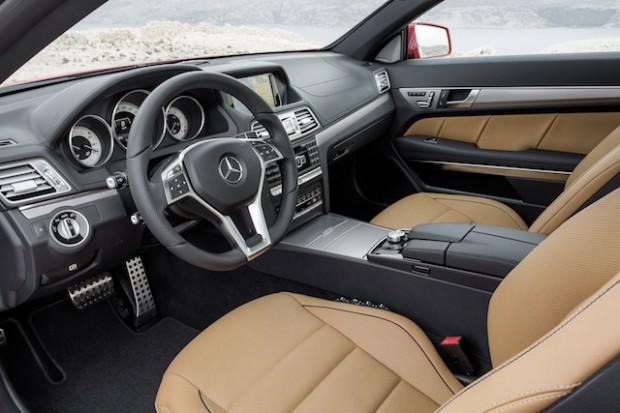 For the Convertible, Mercedes is also offering an acoustic soft top with high-grade insulation, giving it the lowest noise level in its class. This new soft top ensures that little wind noise penetrates the interior even at high speeds.

The model is also equipped with standard AIRCAP, which reduces interior turbulence and wind noise, but also ensures exceptional convertible driving comfort, especially in the rear seat. At speeds over 25 mph, this system deploys automatically. The model will come with an optional AIRSCARF neck-level heating that extends the convertible season by making comfortable top-down driving possible even at low exterior temperatures.

The rear head restraints and wind-stop between them automatically rise if the rear seat belts are buckled. The two individual rear seats are comfortable, although legroom for four full-sized adults will take some negotiating and compromise.

The roof takes a mere 16 seconds to open, and the same again to close. It can be done at up to 40km/h so it’s an easy job at a Brussels traffic light if you don’t mind the attention it draws…. There’s a wind deflector between the rear head restraints (which you can remove by hand) but there’s not masses of wind. This can be an all-weather proposition, too, as there’s the AirScarf, which blows warm air the back of your neck as well as the heated seats. The roof swallows 90 litres of boot space when it’s down, with 390 in total
This convertible version is also equipped with fully retractable side windows. 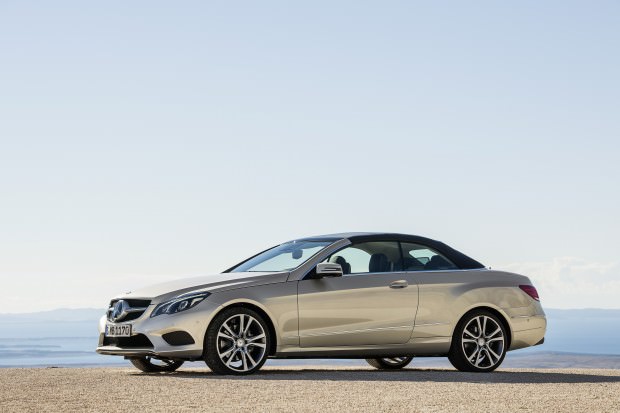 There is a lot of different engines offer for this car. The E250 Cab I tested had the 204bhp 2.1-litre turbocharged four-cylinder diesel. It’s a superb engine: all-alloy, common-rail injection and does a commendable job in a relatively large car here in the E-class. Its strength is in its 368lb ft of torque, as well as the claimed 57.7mpg and 128g/km of C02 figure.

The claimed 7.7sec 0-100km/h time won’t have you arrested, yet the diesel’s flexibility makes this a handy convertible. You can muster your way through traffic and enjoy a B-road more than you might expect. The seven-speed auto is smooth so on the highway it’s a relaxed cruiser.

Saying that, the ride is firm – perhaps too firm for some – with the E250 upset over mid-corner bumps, too. The Adaptive damping and ‘Agility suspension’, which reads the road and adjusts the dampers accordingly, does really well at managing larger bumps and surface changes, and there’s very little roll around corners, too. 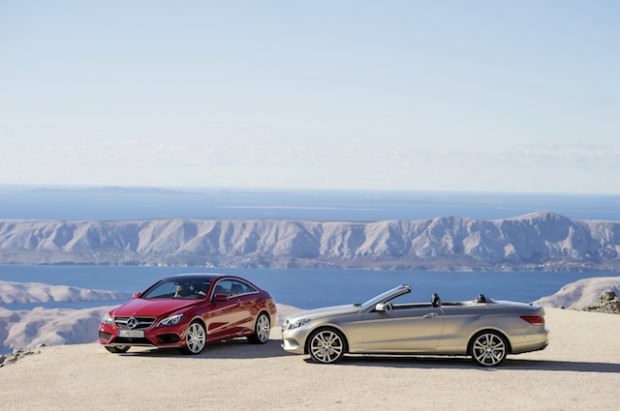 The soft-top E-class is a competent, comfortable and livable cab that still looks sharp and offers a complete car with the few sacrifices for the folding roof itself. This cabrio is a handsome model, but if shoppers already have decided they don’t need the practicality of a sedan’s four doors, they may as well enjoy the fresh-air fun t, which can work well throughout all four seasons. Go for it!