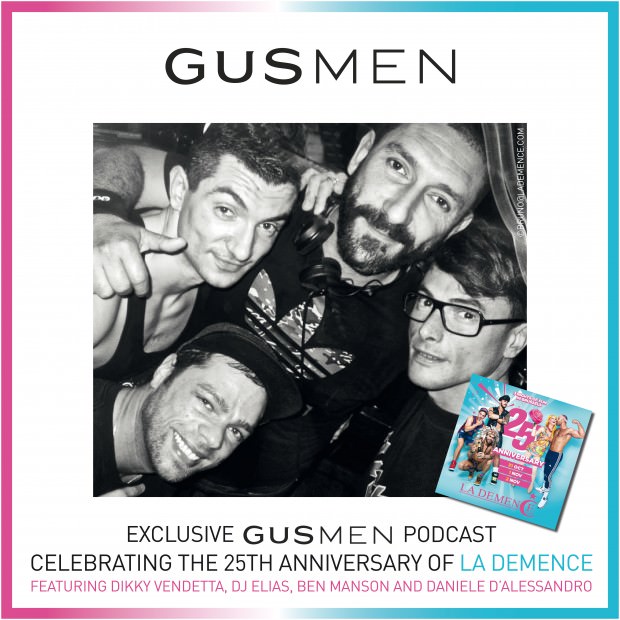 LA DEMENCE is a huge gay party in Brussels that takes place around 12 times a year: mostly on a Friday, or the day before a bank holiday.

What makes LA DEMENCE stand out from the other gay parties are the international crowd, and the variety of styles and ages.

As Brussels is strategically placed as a city, LA DEMENCE attracts, besides the local Belgians, loads of visitors from France, The Netherlands and Germany, as well as hot Italian, Swiss, Spanish, British, Israeli, American guys and many more.
Not only will you hear many languages spoken, but the mix of different ages and styles partying together is nothing short of amazing: leather boys, fashion victims, muscle queens, drags, young and old – overall, in excess of thousand gays having one hell of a party together… since 25 years.

The main event for the anniversary is on Saturday at the Ancient Casino (well-equipped to handle a large-scale event).
The venue for Friday and Saturday known as techno club FUSE, is huge – containing three different rooms, which has the advantage of offering an eclectic range of music delivered by eight international DJs progressing from techno to house, with even a smattering of handbags in the smaller room.

Great music and a great crowd also make LA DEMENCE very sensual, so there are a few areas well worth exploring for those looking for more than just a dance.

GUSMEN loves LA DEMENCE. Our favourite floor is however the first floor where our close DJ friends are playing behind the wheels of steel. The music is less commercial with mixes of progressive, deep and techno house.
To celebrate the 25th anniversary of LA DEMENCE, we have the honour of hosting 4 kings of the decks, Dikky Vendetta, DJ Elias, Ben Manson and Daniele D’Alessandro. They offer us each 30 minutes of their best music.
So listen to a 2-hour set and be ready to party with us throughout the weekend!
Happy Anniversary LA DEMENCE!

Enjoy and share this music podcast made with love.