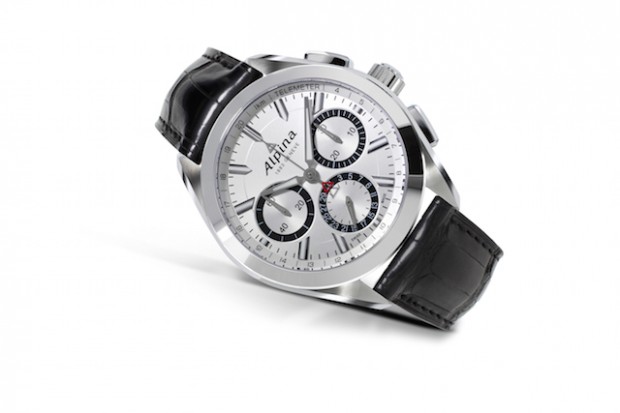 [/wide]After three years of development, Alpina has unveiled a new in-house chronograph movement that is based on the brand’s automatic AL-710 caliber, with the addition of a flyback chronograph module.
With the newautomatic calibre AL-760, the technicians made the considered choice of a modular mode of construction based on the tried and tested AL-710 with a winding rotor operating in both directions.
The control mechanism of the front-mounted chronograph is distinguished by its ingenious construction, which achieves the highest degree of functionality with only 96 components. And it adheres to the dictum that nothing can break down and fail if it is not there in the first place! Special features of the new chronograph include a directly actuated flyback function. With this useful function, the 8th-second chronograph can be stopped and restarted from zero by pressing the push-piece just once.

A counter at 3 o’clock adds cumulative times up to 30 minutes. Opposite, at 9 o’clock, the permanent-seconds hand rotates as usual. And incorporated into the Super-LumiNova-highlighted dial with the utmost harmony, the date hand is positioned at 6 o’clock. Of course, Alpina also made the hands luminous at night.

The AL-760 movement beats at a frequency of 4 Hertz in its large stainless steel case, reminiscent of the legendary “Alpina 4” of 1938. The screwed case back bears the well-known Alpina logo. The wristwatch, available with a stainless steel bracelet oralligator strap, is water-resistant to a pressure of ten atmospheres.

The new caliber AL-760 is making its debut in the Alpiner collection, and represents Alpina’s 5th in-house movement. Ultimately, it will end up in other Alpina chronographs as well. Not to mention, it is all but guaranteed the flyback module will eventually be implemented within the Frederique Constant line, as they are owned by the same group and do not yet have an in-house chronograph. (Editor’s note: the design is already being used in a new Ateliers de Monaco chronograph. Ateliers de Monaco is the high-end brand of the group.)