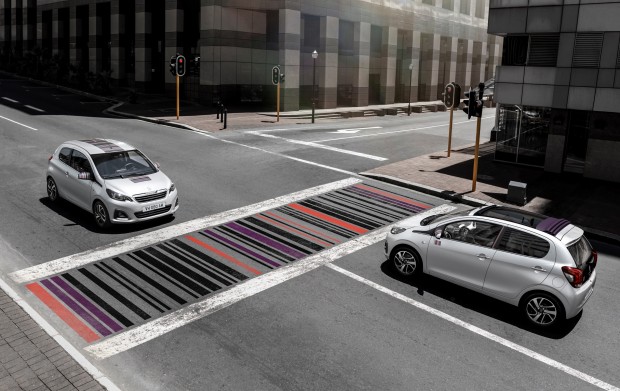 It’s nice when teamwork pays off. The new Peugeot 108 is one of the new city car trio from Peugeot, Toyota and Citroen, as Peugeot did with the model’s predecessor, the 107. This time, though, I reckon the joint project has resulted in a greatly improved car.
The 108 is one of three models that are based on the same underpinnings – the Peugeot shares the majority of its components with the Toyota Aygo and the Citroen C1. 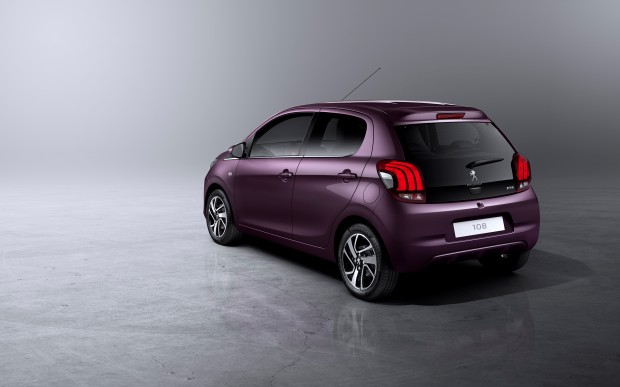 From the off, the Peugeot has all the important boxes ticked: it’s cheap to buy, frugal to run, has small dimensions and cheeky looks. This latest model also adds equipment such as a touchscreen infotainment system, air conditioning, plus automatic headlights and wipers.
With its sharp looks and plush options, including a fully retractable fabric roof, Peugeot’s 108 feels a bit too posh to be aimed solely at youngsters. 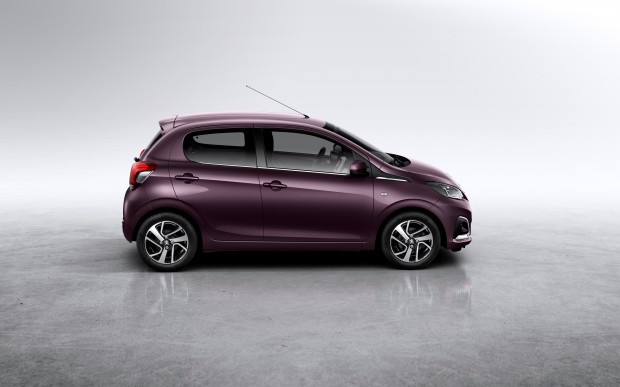 The 108 is a lot more sophisticated than the popular 107 that it replaces. Ivo Groën, the car’s designer, was set the goal of giving the 108 a more premium and upmarket feel. As the designer describe it : it’s car with a chic “about town” character. 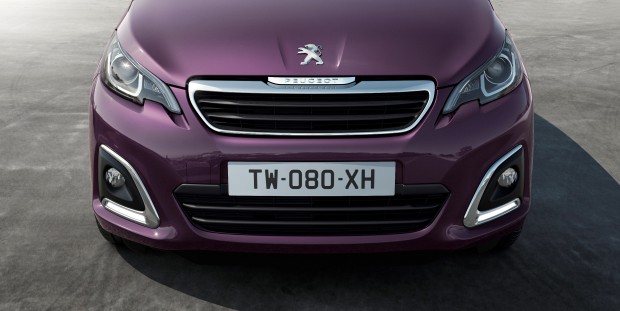 The nose he developed is dominated by the same “floating grille” as seen on the 108’s bigger sisters the 208, 2008 and 308 – they do say noses run in families. The front bumper is now a little more aggressive and is flanked by a pair of smart bifocal projector headlights, while round the back the group’s “lion claw” lamps provide another link to the rest of the Peugeot range.
There are also some nice styling touches such as the neatly integrated rear door on the five-door version 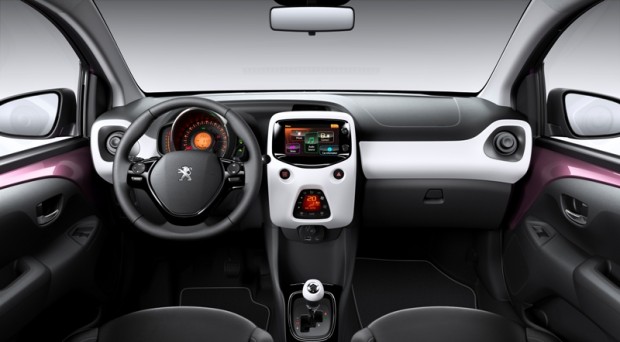 Currently, there’s a trend towards minimalist interior design. Touch screens help enormously in this regard and if you get the 7in infotainment system with this car, the menus are clear and easy to navigate. Although some of the switchgear is made from cheap plastic, build quality is generally high 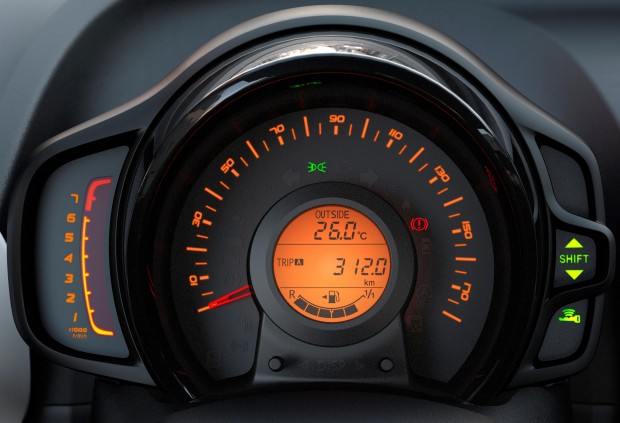 Even with its tiny exterior dimensions, there’s loads of space in the supportive front seats, and enough head- and shoulder room to suit most passengers. Every version bar the entry-level Access trim has a height adjustable driver’s seat,
Four people can squeeze into the 108, but adults will wish there was more legroom in the back. Whether you go for the three-door version of the car or the five-door, the rear windows don’t wind down.

Active, Allure and Feline spec 108s have a touchscreen control system in the centre of the dashboard. This can link wirelessly to most smartphones and mimic their layout, making it easy to play your music, make calls or use Google maps navigation. 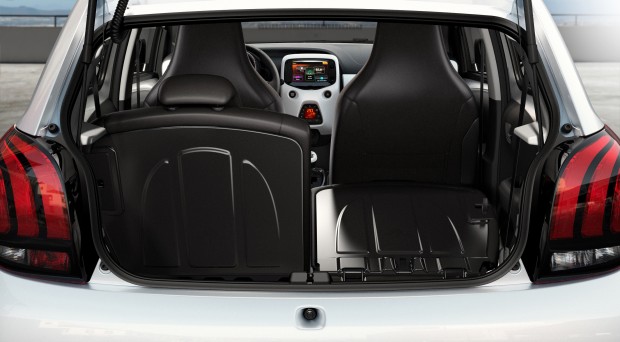 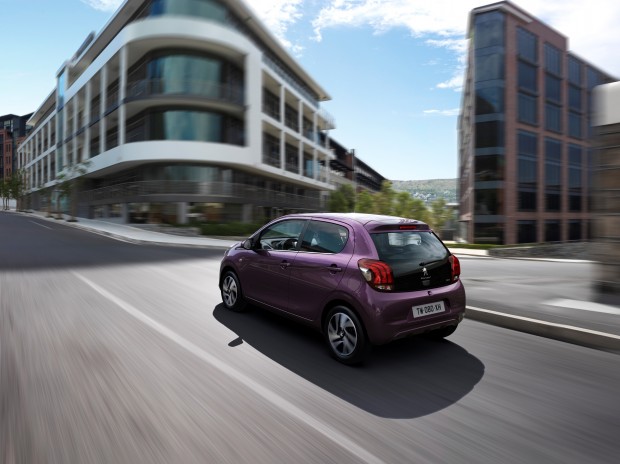 Performance is modest. The 0-100km/h takes 14.2sec (14.9sec for the automatic)– but it’s a gutsy little unit and makes some pleasing noises, so nipping around town can be a lot of fun.

Drive along a typical stretch of bumpy road littered with potholes and speed bumps, and while the 108 never crashes over them, it does jostle its passengers around. It deals better with longer crests and dips, but never settles into a composed cruise.
Tthe tight turning circle and light controls make it easy to park or fit into tight gaps in traffic. 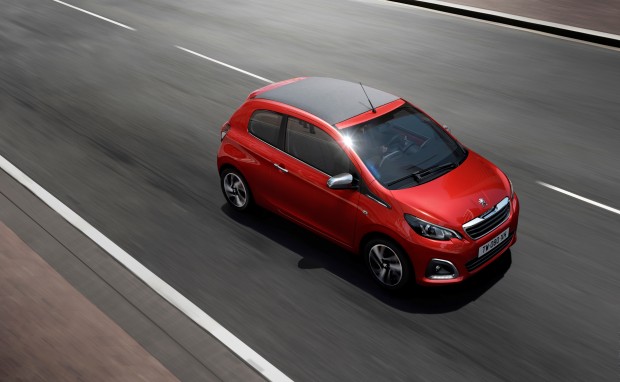 Road and wind noise at speed is perfectly acceptable for this class of car, even in the Top! Cabrio, which I managed to open and close at motorway speeds. Roof open, buffeting and noise are within acceptable levels. Whether you go for the hard top or cabrio, long-distance cruising in the 108, it’s a decent all-rounder.

Safety technology was another priority, so every 108 gets hill start assist to prevent it rolling away on a slope, electronic stability control and six airbags. 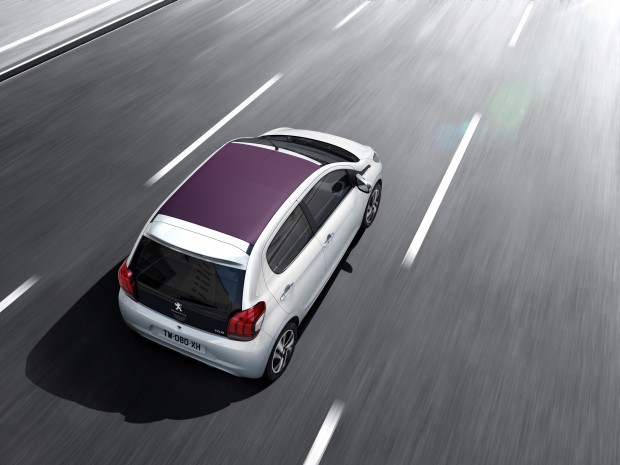 The new Peugeot 108 is a vast improvement over the car it replaces thanks to boosted safety and even lower running costs. It is also better equipped and enjoyable to own, especially if you choose Peugeot 108 Top! that effectively transforms the car into a cut-price convertible if you go for the

It’s nippy, easy to drive, easy to park and surprisingly spacious. And really fun in the sun.