The 2015 Lexus NX is just the latest in a shifting crossover landscape to smaller luxury-minded utes. This Lexus isn’t likely to suit all tastes, but there’s no denying that its daring style attracts attention. Influenced by the jaw-dropping LF-NX concept that made its debut at the 2013 Frankfurt Motor Show, the newcomer has a bold mix of sharp creases, curves and chunky SUV styling cues. 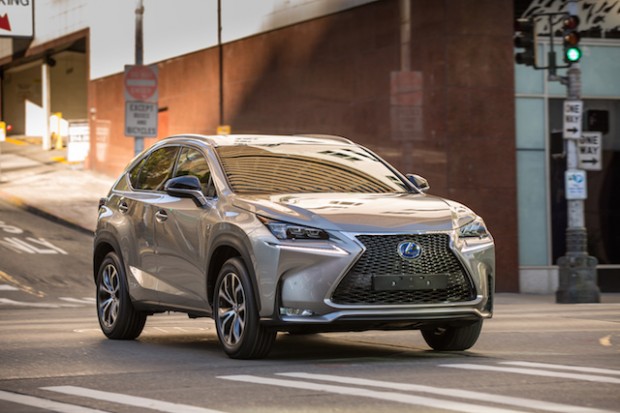 The new Lexus NX is a radically-designed crossover SUV designed to rival the BMW X3, Audi Q5 and Range Rover Evoque. However, unlike each of those, the NX is only available with petrol and petrol-electric hybrid engines – and no diesel options whatsoever.

Arguably the NX’s biggest selling point is its lavish equipment list and near-silent hybrid running gear. Around town it’s whisper quiet, and can even run on battery power alone for a couple of miles. If a hybrid’s not for you, there’s a lavishly equipped 2.0-litre turbo version, but it’s no sports SUV. 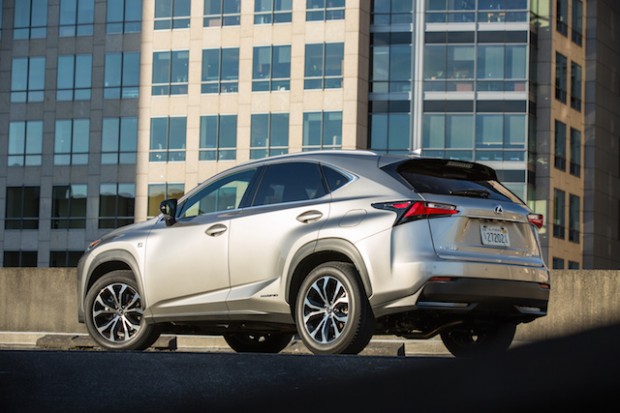 The NX isn’t just redesigned or facelifted compared to a predecessor. Instead, the NX is an all-new vehicle created completely from the ground up, save for a small number of shared parts from Toyota’s compact RAV4 SUV. It’s Lexus’ first attempt in the compact-luxury-crossover segment, which has heated up in recent years.

Styling is bold, sharp and assertive. According to Lexus, the design is meant to attract new, younger buyers who likely want a more daring design than what Lexus’ other models offer. 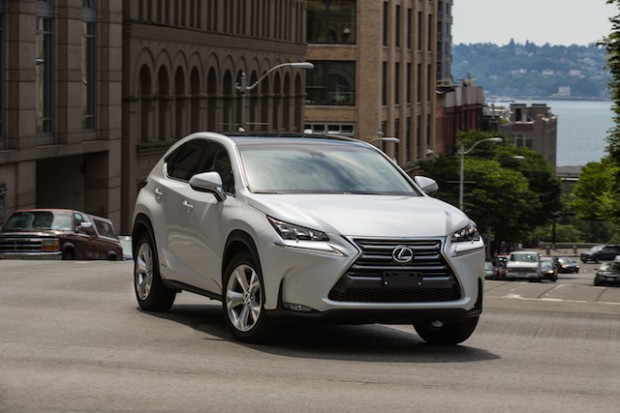 Indeed, when you step inside things are much more “sporty” than over the top luxurious.

Interior quality is impressive, with plush materials and soft-touch surfaces throughout.

Most interior measurements of the NX are very similar to the Toyota Rav4 on which the NX shares basic underpinnings. Standard equipment – even on the basic S and SE models – is generous, with all cars featuring DAB radio, rain sensing wipersand LED daytime running lights.

Rear seats however, feel more generous; and more in-line with what you expect in a luxury-minded crossover. And you can take it further still if you go the F SPORT route, which instead of the usual cow and tree materials, things go black and metallic.

Front seats are even more aggressive, and the LFA-inspired gauges, with boost gauge and G-meter, set the tone when you trigger the start button. There are aluminum pedals for your feet, a unique steering wheel with paddle shifters for your hands, and for your ears, Active Sound Control that lets you dial in as much engine sounds as you want. 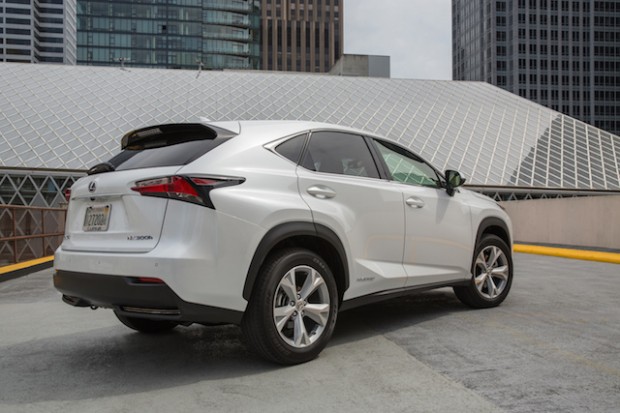 The Lexus’ jacked-up suspension and high set driving position deliver a commanding view of the road ahead, while the driver gets a wide range of seat and wheel adjustment.

The NX scores extra points for rear-seat passengers by not having a lump in the middle of the floor. There’s just enough room for three adults, and headroom is plentiful. 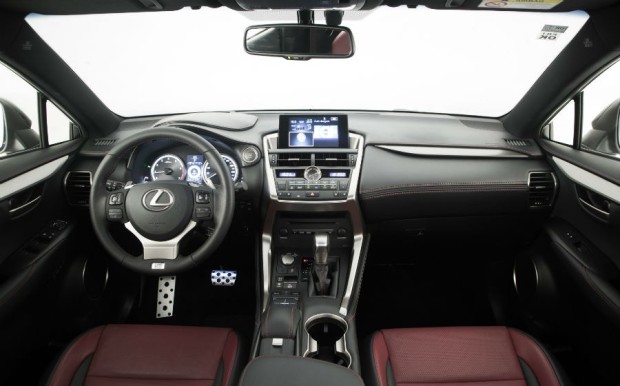 Elsewhere in the cabin, you’ll find plenty of useful storage, including some large door bins, a cooled glovebox and a lidded cubbybetween the front seats. And thanks to the standard electric handbrake, the centre console is freed up for a pair of large cup-holders.

Boot capacity is a rather cramped 475-litres, although carrying capacity can be extended to 1,520-litres when the split-fold rear seat is lowered. And on the plus side, the boot opening is wide and there’s a totally flat load area. 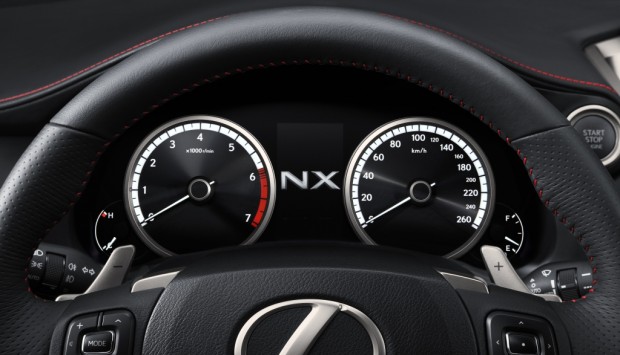 Lexus is pitching this as a sporty SUV, with the styling and performance-oriented F Sport model to prove it, the NX’s engines actually curtail the crossover’s performance dramatically. In fact, the NX’s 235-hp turbocharged 4-cylinder is the least powerful top-of-the-line engine in its class. 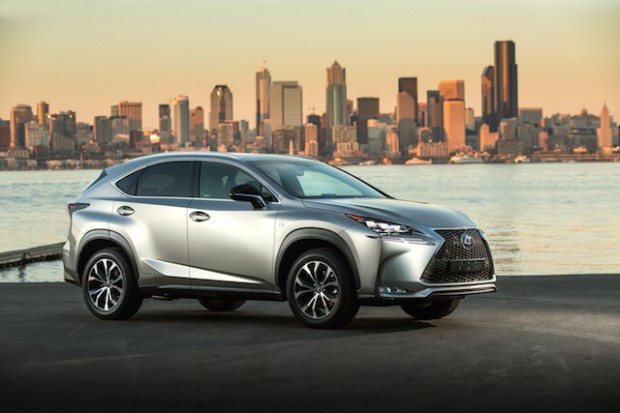 One of the first things you notice when you climb into the NX is how comfortable the seats are.

Go for the hybrid version (badged NX300h) and the car can be run at low speed in pure electric mode – a serene experience, even if it only lasts for a maximum of a mile. However, while the petrol engine cuts in smoothly, it is a fairly vocal partner when you accelerate hard.

At a steady motorway speed engine and wind noise are minimal, although poor road surfaces roar noisily through the NX’s interior.

While the steering feels reasonably well weighted at low speed, and stable on the motorway, it isn’t quite as consistent in how the weight builds through faster corners or roundabouts. 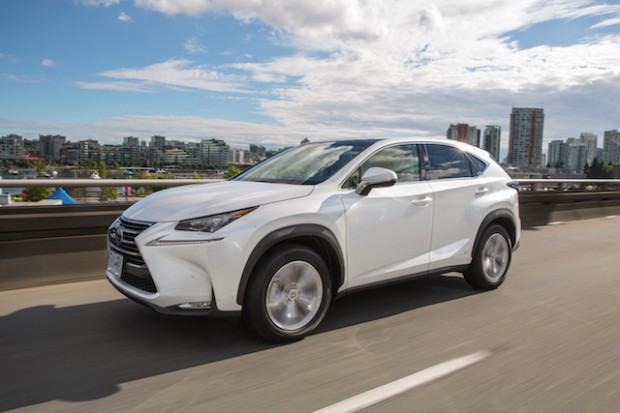 The NX is fitted with eight airbags as standard, including one for the driver’s knees. Upgrade from entry-level S specification and you also benefit from four-wheel drive. All models feature adaptive cruise control that can maintain a safe distance from the car in front, or even bring the car to a complete stop if it senses a collision is imminent.

Luxury spec is our favourite, because it turns the seats from cloth to leather and includes parking sensors front and rear, while F Sport adds stiffer sports suspension and a wireless phone charger.

The top-of-the-range Premier model includes items such as a heated steering wheel and ventilated front seats, as well as the full array of active safety systems.

Featuring bold, concept car styling, an upmarket interior and a hi-tech hybrid powerplant, the newcomer certainly stands out from the crowd. Interior quality is impressive, with plush materials and soft-touch surfaces throughout.

If sporty is your thing, this model isn’t it. Yes, the NX 200t F Sport offers aggressive styling, paddle shifters and stiffer suspension for better handling, but the crossover’s engine and transmission are overcome by its size.

One thing is certain. Lexus knows how to do plush, luxury crossovers well; evidenced by over 1-million RX sales. And while there is certainly a demand for a smaller version, let’s see how i twill sale !