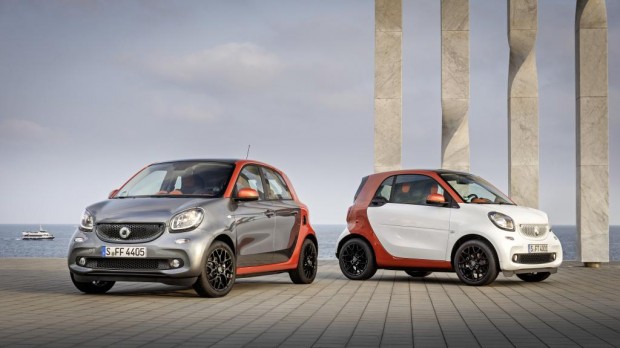 A city car is best when used as cheap utilitarian transport to bounce around congested cities in, reversing into Transits and lamposts and being used as a lean-to by cyclists.
The Smart Fortwo is a known quantity. It’s the novelty you often see strewn haphazardly on snippets of unclaimed urban streetscape.

The Forfour is a different story. The original 2004 Smart ForFour city car wasn’t a great sales success. Few months ago, however, the four-seat Smart urban runabout is making a comeback in the form of this, the new 2015 Smart ForFour.
It’s basically a bigger, roomier version of its smaller sibling, the Smart ForTwo.
l However, the new car shares the latest ForTwo’s mechanicals, meaning this 2015 ForFour model (both are actually based on the Renault Twingo city car) also boasts a quirky rear-engined, rear-wheel drive layout.

The second-generation ForFour has taken on a whole new look, with the hatchback now sharing many design features with the smaller two-seat ForTwo. It does have something of a family resemblance to the old model, however, thanks to its two-tone bodywork.

A square headlamp design, stronger shoulder line and larger honeycomb grille are all new and result in a more premium image, with neat design touches for the headlights and tail lamps. There are nine body colours and three grille colours on offer, and the safety cell visible on the rear of the car comes in contrasting colours as well.

Traditionally, buyers have always been able to personalise their Smart car, and the new ForFour is no different. Three trim levels are available (Passion, Proxy and Prime) with up to 40 different colour combinations available for the ForFour’s main bodywork and the car’s ‘Tridion’ safety cell. 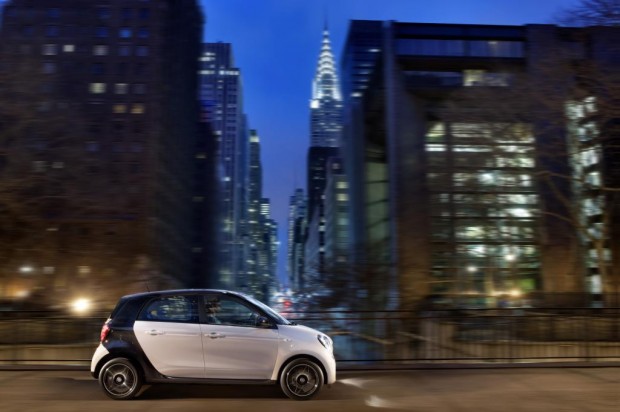 The interior’s more plush than the Renault, with a fabric covering for the dash in a range of entertainingly garish colours and a glossier surface for the switchgear

Even the entry-level Passion version is fairly well equipped. The view from the front seats is identical to the Fortwo’s, down to the 6.5-inch multimedia touch screen and the cute air vents. LED daytime running lights are standard, as are cruise control, a speed limiter, power windows, and active seatbelt tensioners. There is an available multifunction steering wheel, a 3.5-inch TFT screen in the instrument cluster, a JBL sound system with a 240-watt amplifier, and an app that allows a smartphone to be connected directly to the car’s systems. 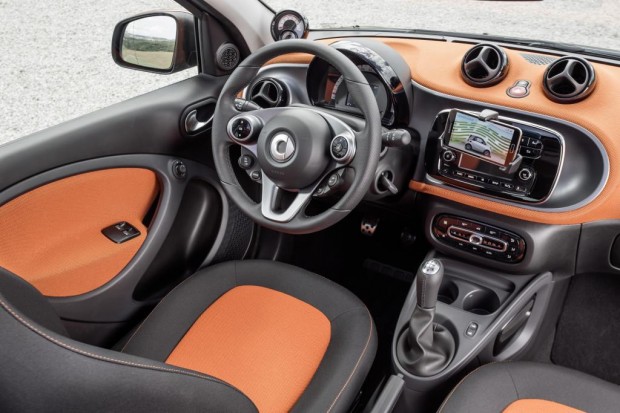 There’s a lot of shoulder room, which will please fully grown adults worrying about fitting into a city car.

There are some clever touches making Smart ForFour practicality better than a lot of cars in its class.

The primary feature in this respect is probably the rear door opening. They both open to 85 degrees, which really helps access the back seats. The seats themselves have bases which fold away to open up more vertical space to store items that won’t fit in the 185-litre boot. 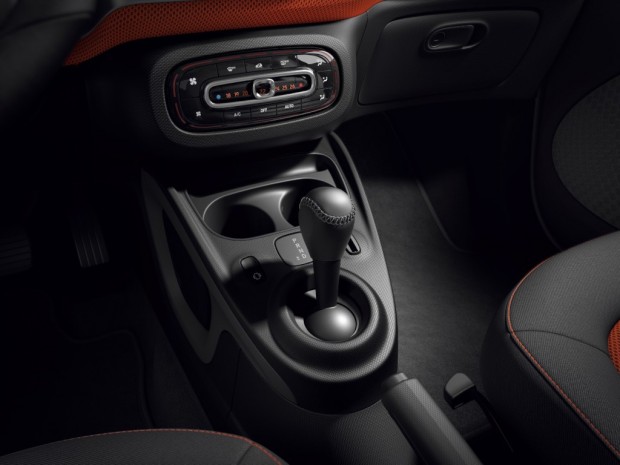 You can fold the seat backs down in a 50:50 split, and folding both down you’re left with a flat floor from the boot lip to the back of the front seats. This means 975 litres of storage space.

In between the two rear seats there’s a storage box with two cup holders, but this can be removed if not required at the time.

There are cup-holders in the front too, along with an average-sized glovebox.

The lower-powered engine is available from launch, which is a 1-litre, three-cylinder unit producing 71hp. It also makes peak torque of 91Nm at 2,850rpm, which means it’ll cover 0-100km/h in 15.9 seconds. Top speed is 150 km/h.
For those after a bit more performance, the 0.9-litre turbocharged engine is the one for you. With 90bhp and 135Nm of torque at 5,500rpm, this is by far the best powerplant for this car. It’s more versatile thanks to the extra power, so you don’t have to change gear or wring the Smart’s neck quite as much.

Both engines are coupled to a good five-speed manual gearbox which feels solid in its operation. 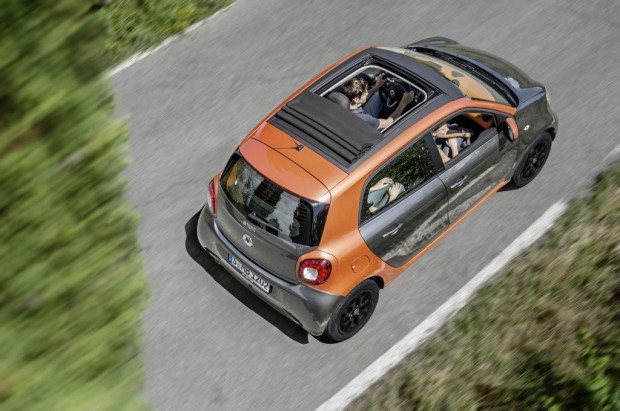 The beauty about the way the Smart drives is that its engine sits in the rear, over the rear axle like an old VW Beetle. This allows the front wheels loads of room to move, and hence the ForFour’s turning circle is absolutely tiny, making it perfect for inner-city
The ForFour isn’t quite as good at this as the smaller ForTwo, but it’s still extremely easy to manoeuvre through city centres.

The ForFour is very quiet when you’re driving. The ride quality is very good though, and the seats are comfortable.

I felt the steering to be lighter and slightly less engaging than on the smaller Smart, but it’s still fairly communicative.

The new ForFour shares almost no relation to the previous model. New engines and an all-new chassis mean the old car’s reliability history has little impact on the latest model, but Smart as a brand has a respectable if not stunning overall reliability record.