This fall marks the grand opening of the third classical music subscription season at Elma Arts Complex Luxury Hotel. After two successful arts and culture seasons, the Elma Hall has established itself as a destination worthy of a musical pilgrimage, with performers and audiences flocking to the auditorium for its perfectly dynamic acoustics that can be suited to any musical style, genre, or technique. Located in Zichron Ya’akov, some 60 kilometers up the coastline from Tel Aviv, Elma is the brainchild of Israeli philanthropist and art collector Lily Elstein, whose original dream was to build a cultural center. After eight years of extensive planning and construction, the Mivtachim Sanitarium, Yaakov Rechter’s award-winning masterwork of postwar Brutalism, reopened as the Elma Arts Complex Luxury Hotel, an innovative property set on the rim of Israel’s Mount Carmel Ridge overlooking vast sloping forests and the deep blue Mediterranean Sea.

In 2006, just before the famed building that now houses Elma was about to be demolished for a neighborhood of villas, Elstein bought it—at twice her initial offer—driven by a profound desire to infuse arts throughout the dramatic structure. 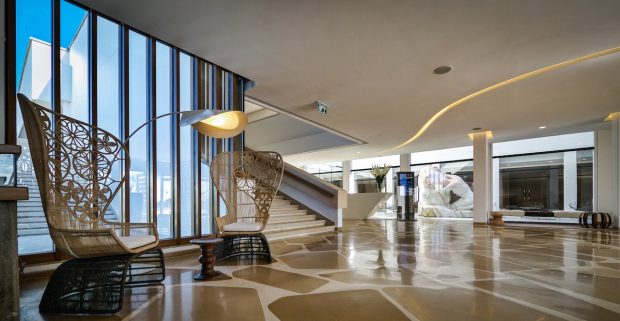 True to her vision, Elma has not only become a 95-room luxury hotel, but also a fully-fledged creative arts center—an immersive experience of Israeli culture: contemporary, relevant, original, and in pursuit of the highest artistic pedigree. 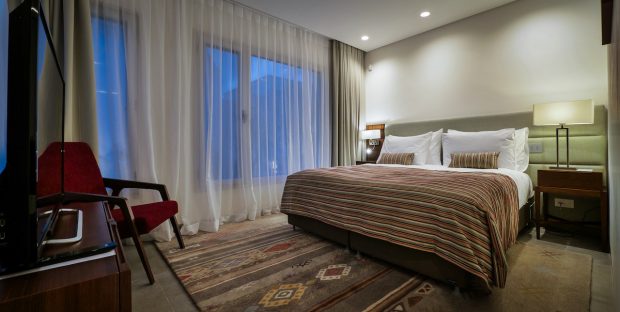 In order to attract top Israeli and international talent, Elstein built a 450-seat auditorium designed for opera, philharmonic orchestra concerts, and contemporary dance performances. Believing no great concert hall is complete without an organ, Elstein commissioned the famed German organ builder Philipp Klais, from Bonn, to customize a unit in unorthodox fashion. Following precise directions from the architect, Klais succeeded in filling a rather small area above the stage with 1326 pipes. 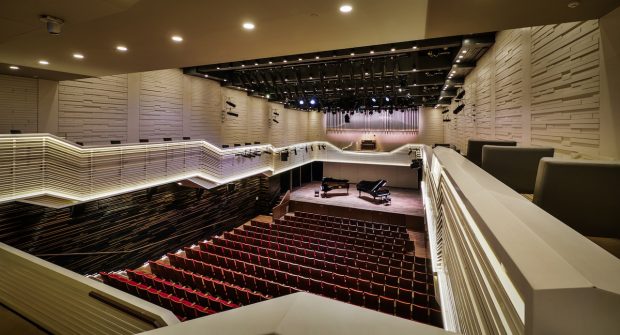 Entering Elma, one has the feeling of a museum. Paintings, sculptures, and reliefs are delicately placed, presenting Israeli art at its peak. Art is displayed in three galleries, as well as in all the public areas within the hotel: from the entrance hall via the large hallways, coffee shop, and artist studios, to the first-floor corridors filled with natural, indirect light, which is perfect for the exhibition of art. The permanent Elstein Collection includes works by such international Israelis as Yehudit Sasportas, Sigalit Landau, and Ilit Azoulay. As of September, three contemporary exhibitions are set, including works by painter Elad Kopler, who has exhibited solo at the Tel Aviv Museum of Art; by Eitan Vitkon, an acclaimed contemporary photographer whose work has been exhibited worldwide; and lastly, the exhibition curated out of the collection of the Givon Art Gallery, a Tel Aviv gallery that has specialized in early and contemporary Israeli modernism since its establishment in 1975.

At the helm of the cultural programming for the hotel, Israeli music educator and writer Noam Ben Zeev has curated a Fall and Winter line-up that rivals top concert halls around the world. With an open environment and community-building central to the core philosophy, the extensive arts program puts a focus on young musicians and arts education. Evidencing these ideals, the hotel offers free concerts to amateur musicians from the area, as well as lending the auditorium to the local high school for concerts and plays by the music and theatre departments, and the year-end concert of the local music conservatory. In 2017, the groundbreaking State Competition for excellent music and dance students (a co-production with the Israeli Ministry of Education) also began. Looking forward to next year, Summer 2018 boats participation at the Third Piano Summer Course, led by the renowned pianist and conductor Murray Perahia.

Seasonal highlights for the 2017/18 program include a concert devoted to Carmen, with highlights of the opera by G. Bizet, and the second Toujours Mozart Festival, an Elma production sponsored and founded by Erich Fischer of Munich and his International Stiftung zur Förderung von Kultur und Zivilisation. In this lively festival, 29 musical events span three days (Jan. 25 – 27, 2018), all devoted to Mozart—including oratorio music with an orchestra, a choir, and soloists; the whole cycle of violin sonatas; period dance lessons; and a surprise Mozart birthday party. Apart from the classical season, the 200-seat bar The Cube is perfect for jazz, rock, folk, and myriad other styles, especially on Friday nights. “Wednesday Live” is a weekly series of young and promising rock performances; and Thursday and Saturday nights feature bigger shows of popular Israeli artists.

Nov. 23, 2017: Prayer of the Mothers” Ensemble: Yael Deckelbaum and a 16-women ensemble (an international project of Jews and Arabs singing for peace)

Jan. 25 – 27, 2018: Mozart Festival: A great happening of Mozart, with an orchestra, a choir, soloists, and organ all performing in the historical performance practice with authentic instruments, in 29 concerts of all genres, lectures, and masterclasses

Throughout Winter— The arts exhibitions: new exhibitions and works by photographer Eitan Vitkon, painter Elad Kopler, and sculpturers Yigael Tumarkin, Sigalit Landau, and Bat-El Alfasi as well as conferences on the topics of art, medicine, law, and economics.