Kodiak means, in the local language, “island”. So technically it’s called “Island”.
To avoid any legal unpleasantness, Skoda has changed the final “k” to a “q”, but the message is clear. This is a car for the great outdoors. It’s for the people who know, when they’re confronted by a bear, what to do. Not like you and me, who would stand there thinking, I know I should run if it’s a grizzly and stand my ground if it isn’t . . . Or is it the other way round?

Of course, a name on its own is not enough. There are plenty of seven-seat SUVs to choose from if you’ve got deep pockets, but what if you’re looking for something more reasonably priced? Well, then the Skoda Kodiaq is one car that should definitely be on your shortlist.

The Kodiaq is not only Skoda’s first proper SUV but also its first seven-seat passenger car of any sort. In light of those facts, the Czech manufacturer has done very well to get so much right about the way the car is packaged and fitted out in order to open up those rearmost two seats for everyday use and generally to make the car as versatile as it can be. 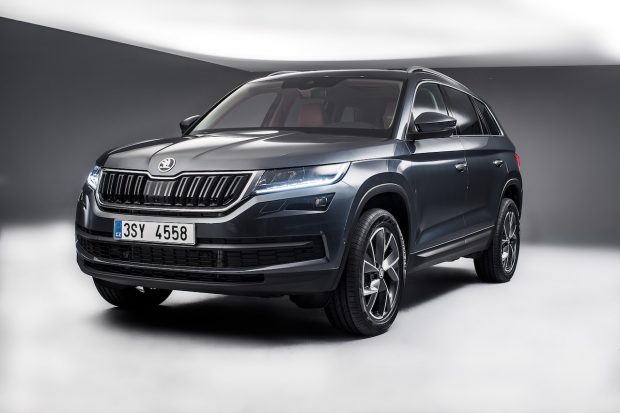 After years of producing rather nondescript vehicles, Skoda proved it can do stylish with models such as the Yeti and Superb. The Kodiaq can be added to that list – it’s not radical or groundbreaking to look at in any way, but it has an understated class to it that belies its pricetag. The front-end is heavily inspired by the Superb, with a sharp dual headlight design made to look like Czech crystals. It’s got a far more angular stance than the smaller Yeti SUV, too, while details like the prominent grille, clamshell bonnet and high waistline give it true SUV presence. At the back. There’s Skoda’s now trademark styling line slicing the bootlid in two, and squared-off taillights. 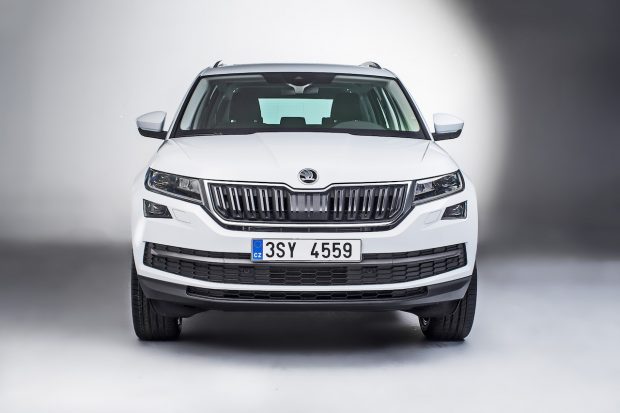 Full LED headlights are optional on all trim levels and standard on higher-end models, and add another element of class to the Kodiaq. They also include Audi-style scrolling LED indicators, although even base models come with LED daytime running lights and LED tail-lights. 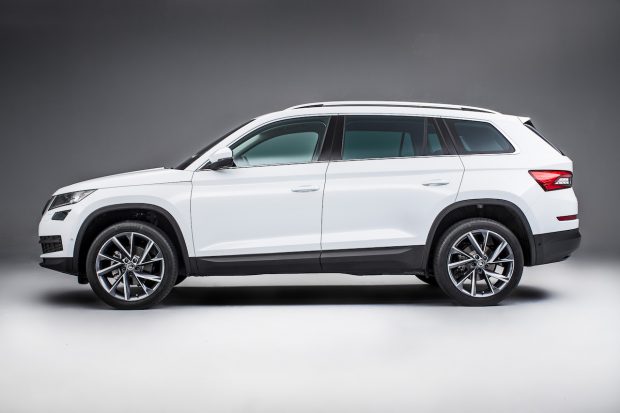 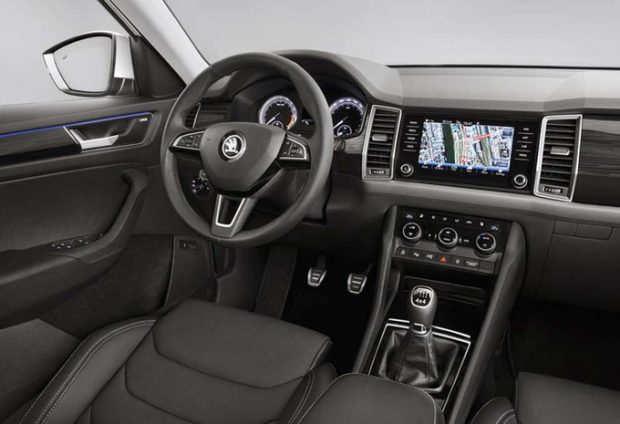 This wouldn’t be a Skoda if it wasn’t spacious, so you’re unlikely to have any issues with feeling cramped – even if you’re a basketball player. Head room is copious and the front seats slide back a long way to accommodate anyone long in the legs.
The Kodiaq has tonnes of occupant space up front, while headroom is impressive in the rear, too. Legroom isn’t quite as cavernous as the longer Superb even with the seat slid all the way back, but it’s more than adequate.
You won’t find the third row of seats offers enough head and legroom and you won’t have much fun back there, but you could argue that this class of car isn’t designed to seat seven adults. 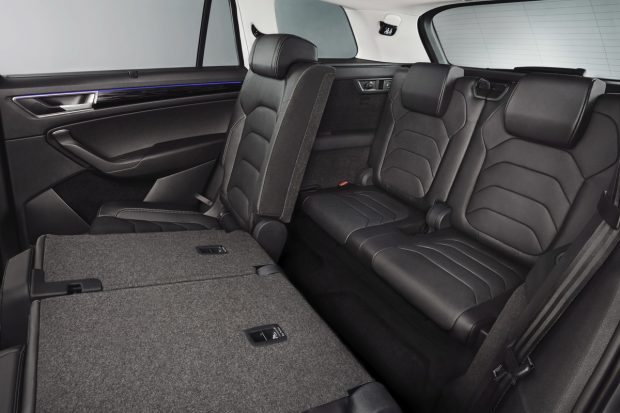 Inside, the design is a mixture of familiarity and new. The wood-like inlays covering the dash won’t be to all tastes, but they do make the Kodiaq feel upmarket.
The Kodiaq’s dashboard layout is entirely conventional, but it’s smartly presented, well laid out and solidly constructed.
This is easy to operate thanks to clear, logical menus – and there’s barely any delay between you pressing the screen and whatever you’ve asked for happening. Gadgets such as a DAB radio, a USB socket and Smartphone mirroring (Apple Carplay and Android Auto) also come as standard, while SE L trim also adds built-in sat-nav functionality. 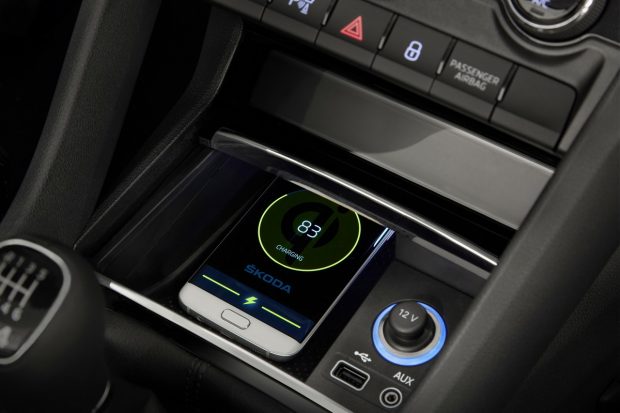 As for the trim levels, there are four to choose from – S, SE, SE L and Edition. Entry-level Kodiaqs will be equipped with 17in alloy wheels, electric windows, LED day-running-lights, keyless ignition, tinted rear windows, emergency autonomous braking and various other safety tech as standard. Inside, there is air conditioning, a cooled glove box, height adjustable front seats and steering column and hill start assist.
The range-topping Edition model even has wireless phone charging, while an optional Technology pack (available on SE L and Edition trims) can turn your Kodiaq into a wifi hotspot.
The brand is calling the Kodiaq the most connected car it’s ever built, and the infotainment system definitely reflects this. Infotainment Online means you can check the price of fuel, parking info and Google Earth or Street View, plus Skoda’s SmartLink system brings even greater levels of connectivity, with Apple CarPlay and Android Auto capability. There’s also SmartGate – an app Kodiaq owners can download to check the status of their vehicle, such as remaining fuel and range.

Meanwhile, the door pockets are big enough to swallow a large bottle of water. There’s further storage under the front armrest and in front of the gear lever, the latter of which is specifically designed to stow your mobile phone.
When all seven seats are in place the Skoda has a 270-litre capacity – similar to most superminis – but this increases to between 560 and 765 litres in five-seat form, depending on which position you set the 60:40 split sliding middle seats.
The floor of the boot is pretty much flat as long as you’ve got the variable boot floor fitted, which comes as standard on SE L and Edition trims but costs extra on cheaper models. 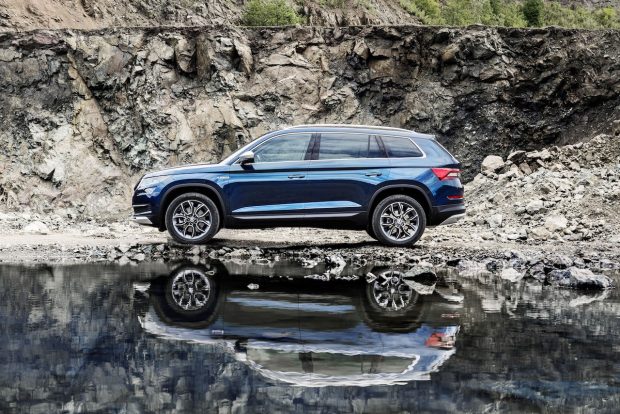 The Kodiaq has an engine to suit every need, while it handles well for an SUV and the ride is controlled.
Buyers of larger SUVs like the Kodiaq are unlikely to be too interested in how it handles bends at speed, but its reassuring to know the big Skoda offers a very good ride and handling balance on the whole. Combine that with the strong performance and decent refinement of the engines, and it’s got potential to be a class leader. 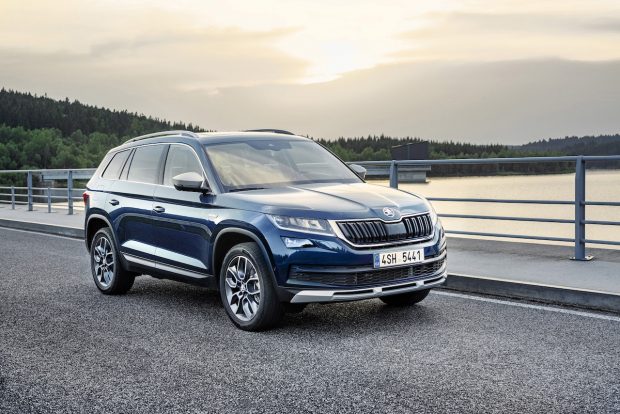 The driving position is hard to fault, with plenty of adjustment in the seat and steering wheel to set everything up just how you like it.

The optional adaptive suspension (called Dynamic Chassis Control) system lets you stiffen or soften the suspension at the touch of the button, and if you choose the softest modes (aptly labelled ‘Comfort’) the Kodiaq deals even more adroitly with road scars at higher speeds.
Big SUVs have a tendency to sway around quite a bit through corners – but not the Kodiaq. And there’s plenty of grip. 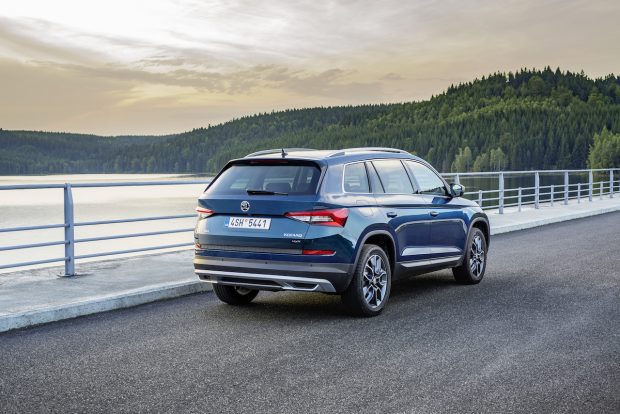 The Drive Mode Selection system (standard on SE L trim and above; optional on the cheaper trims) allows you to add much-needed weight to the steering by providing a Sport mode.
The standard six-speed manual has a precise, satisfying action, while the optional DSG unit is swift and smooth to change so long as you don’t make too many demands of it.
Likewise, the clutch and brake pedals are positive and give you enough feedback to make the Kodiaq easier than its main rivals to drive smoothly.

Rear parking sensors come as standard on SE trim and above, while front parking sensors and an area view monitor are available as options. If you’re still nervous about parking, a self-parking system is also available. 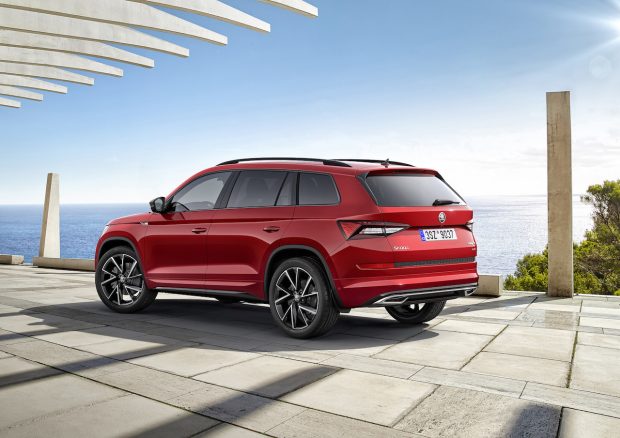 Skoda made a good job with the new Kodiaq SUV that has lived up to expectations. It covers all the bases by not only being comfortable, practical and good to drive, but it’s also relatively cheap to run, easy to live with and solidly built.