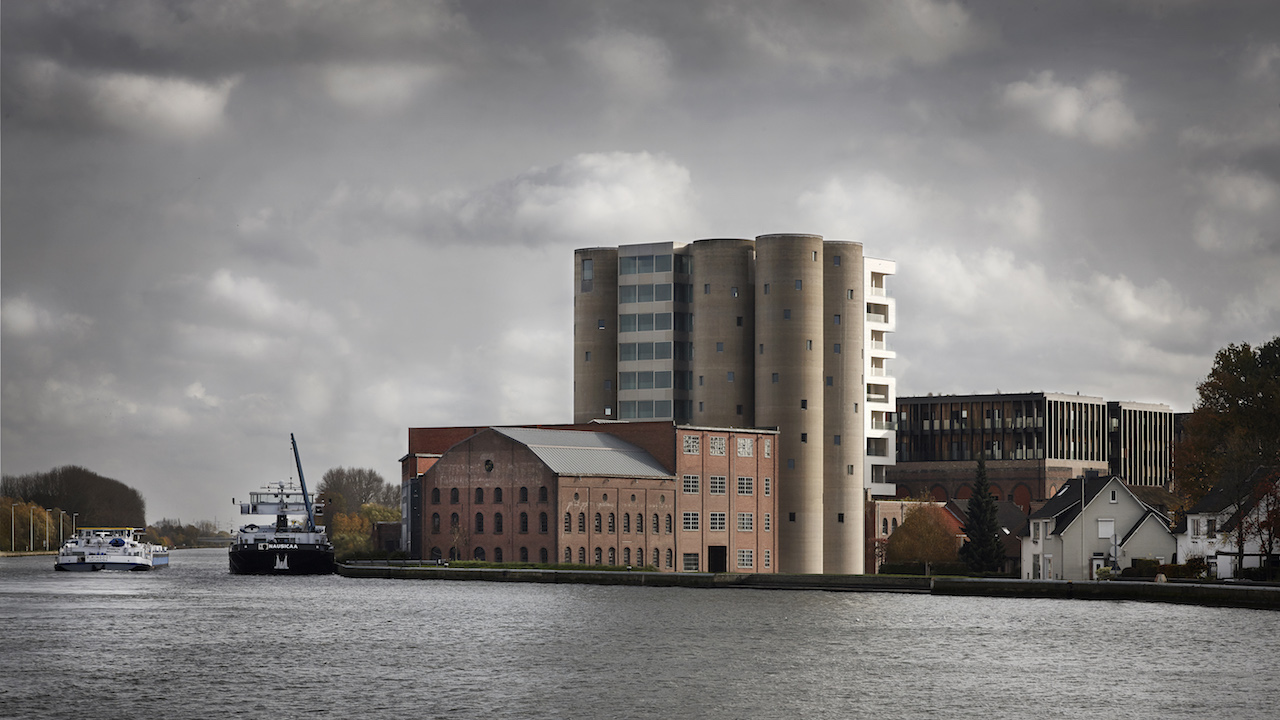 The Kanaal site in Wijnegem.©Jan Liégeois

The transformation of Kanaal, the industrial site that serves as the headquarters for the Axel Vervoordt Company, is now complete. This represents a major milestone in the company’s history and the life of the founder, continuing a 45-year tradition of revitalising historic architecture to present an enduring philosophy of living with art.
The Kanaal is a significant milestone in the life of Axel Vervoordt and represents a consistent philosophy that started in the late 1960s, with the acquisition and restoration of the 16th century buildings in the Vlaeykensgang in Antwerp, and continued with the restoration of the castle of ‘s-Gravenwezel in 1984. The Kanaal project is thus the realisation of the company’s vision to create a diverse artistic, cultural, residential, and commercial destination surrounded by nature. Originally built in 1857, the red brick warehouses and grain-storage silos of the former malting distillery have been transformed over the last decade into a 55,000-square meter complex. The site now includes 98 apartments, 30 offices and supporting facilities, an artisanal French bakery by Poilâne, an organic, fresh market by CRU, a restaurant, and multi-use auditorium, alongside the Vervoordt company’s offices, research, workshops and restoration facilities, showrooms, and exhibition spaces. 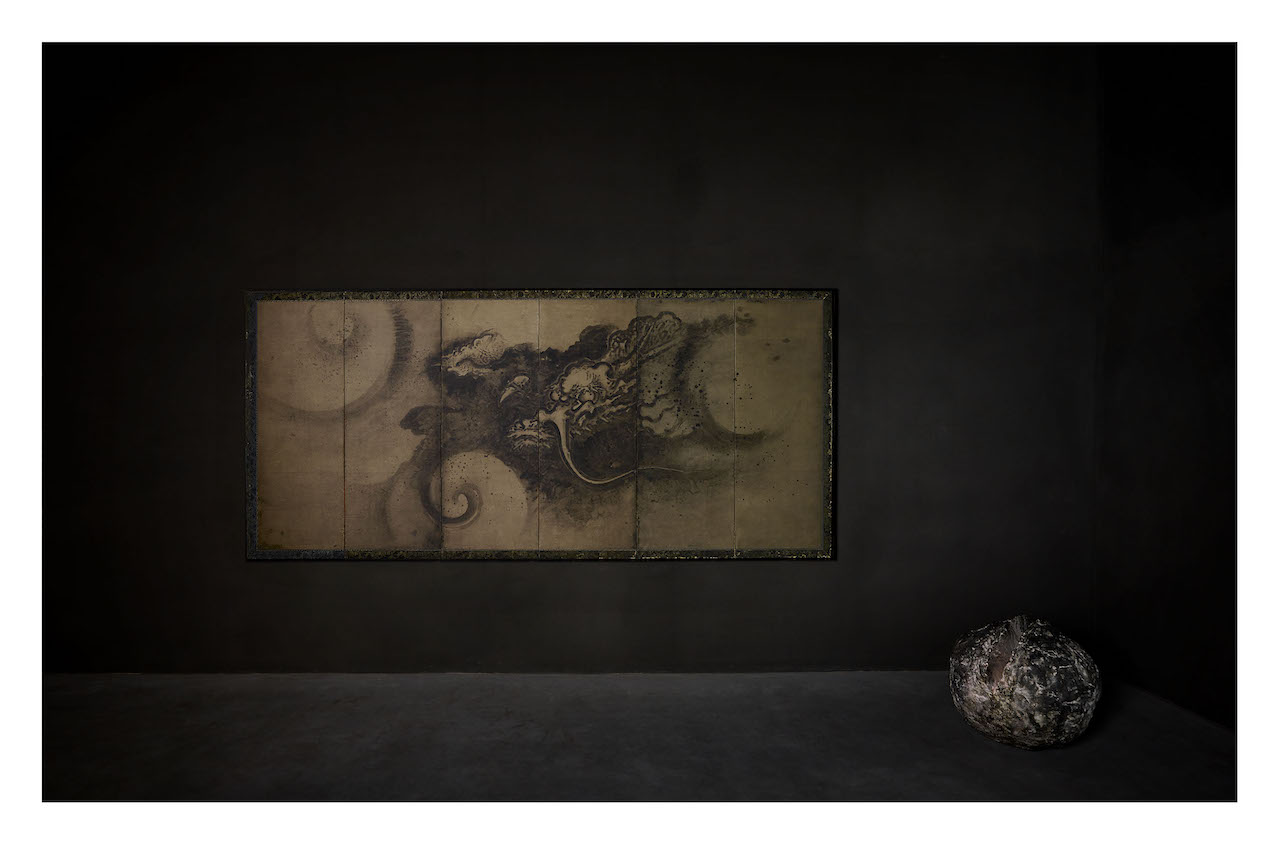 The buildings that house the new spaces, dedicated to the Axel & May Vervoordt Foundation and the Axel Vervoordt Gallery, have been designed by Axel Vervoordt himself, in collaboration with the architect Tatsuro Miki. A partnership that has produced many projects based on Wabi principles. The new exhibition spaces are installed side-by-side to respect the past, and a personal collection built over five decades, while also looking toward the future. The architecture harnesses the principles of sacred mathematical proportions, and is embedded with natural light throughout. The exhibition spaces are positioned to allow each artistic experience to breathe, offering visitors a unique journey through the latest evolution of the Vervoordt legacy.

The Axel & May Vervoordt Foundation headquarters 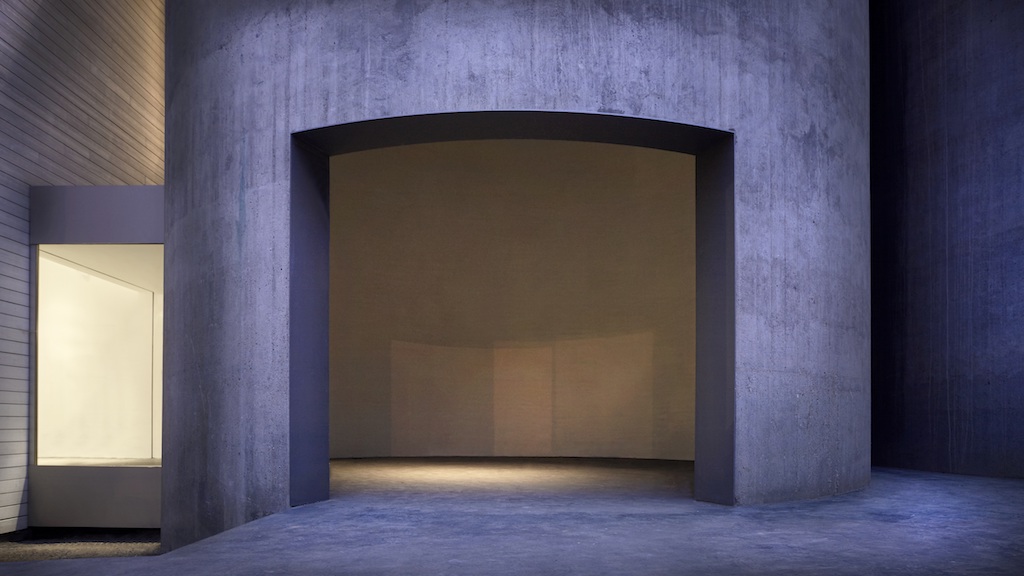 Entrance of Silo at Kanaal.©Jan Liégeois 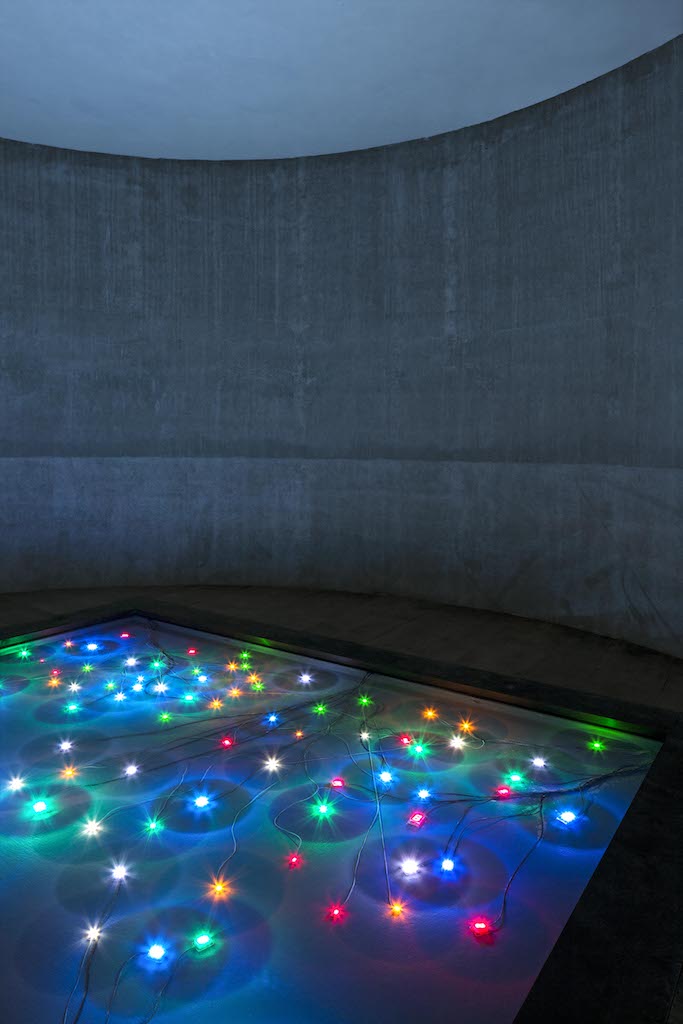 The Axel & May Vervoordt Foundation is a non-profit organisation founded in 2008, which emerged out of the exhibitions curated by Axel Vervoordt, including curated exhibitions in partnership with Daniela Ferretti and Palazzo Fortuny in Venice. The Foundation’s principles invite us to hold up art as a mirror to ourselves and to our collective human experience, to help us find new ways forward with the world. Harmony is the key quality running throughout the collection of which the Axel & May Vervoordt Foundation is the custodian. Besides lending works to institutions worldwide, its mission is to preserve the collection’s integrity for future generations and to organize exhibitions, both at external venues and in its planned own space at the Kanaal site. In 2018, the Foundation will publish a book featuring a comprehensive survey of the exhibitions held over ten years at Palazzo Fortuny in Venice with a detailed overview of the Axel & May Vervoordt collection. 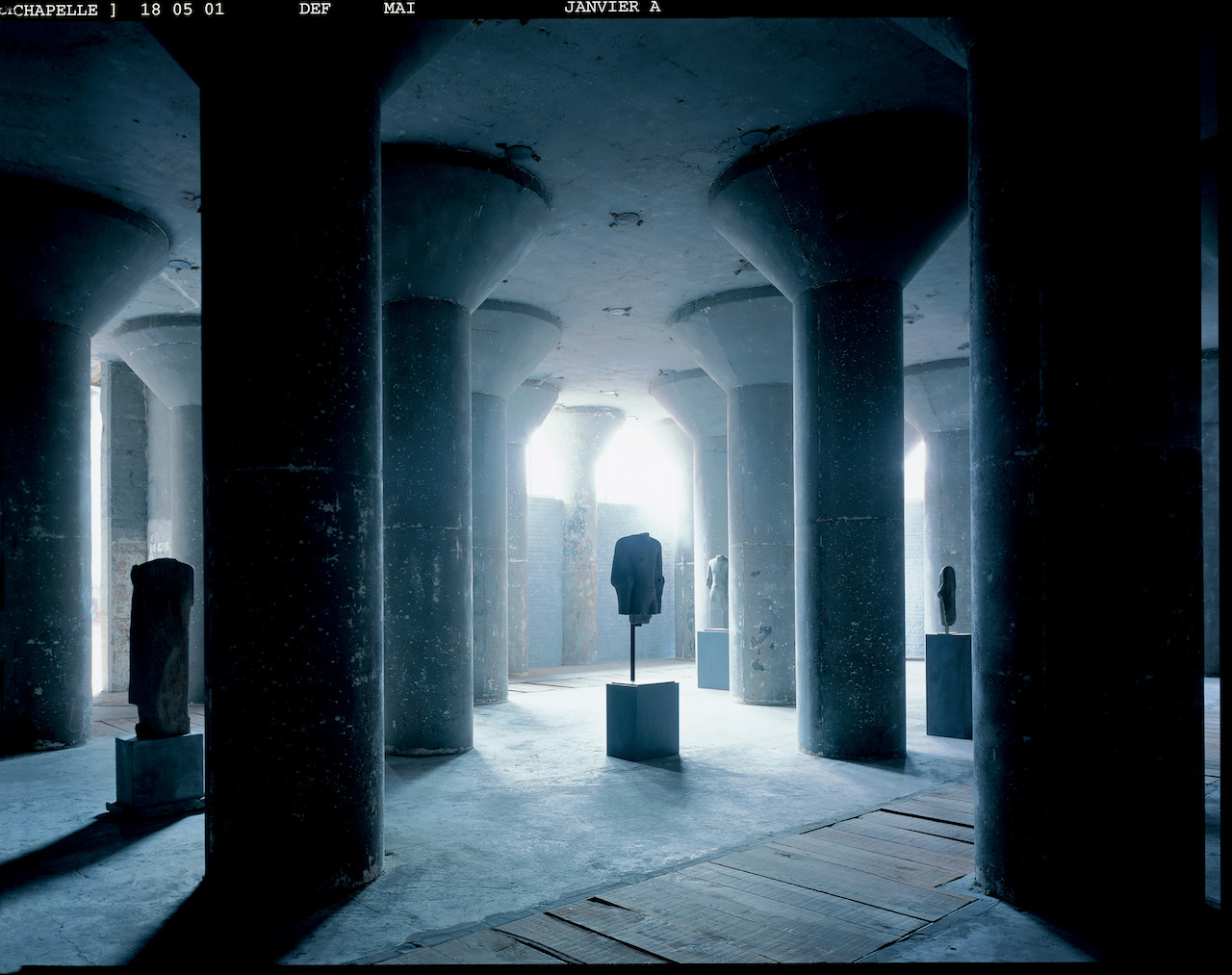 View of the Karnak space.©Laziz Hamani 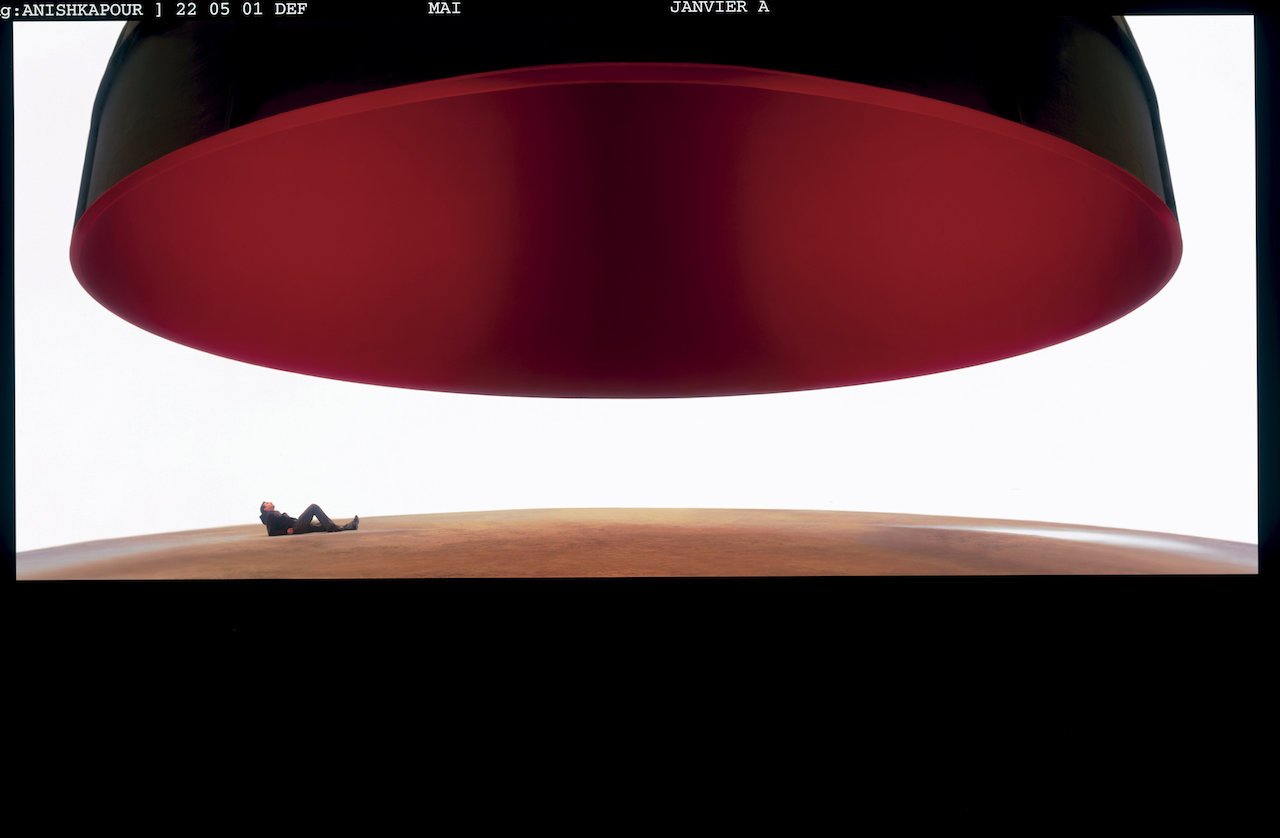 Anish Kapoor’s permanent installation At the Edge of the World, 1998.©Laziz Hamani

Since the start of the development, several artworks from the Axel & May Vervoordt Foundation have already been installed on the site. These include the iconic collection of 7th – 8th century Mon-Dvaravati Buddha sculptures, Angkor Borei style, installed in the columns hall supporting a new silos’ building, called ‘Karnak’. Situated in the centre of the entire site of Kanaal is Anish Kapoor’s huge 1998 dome installation At the Edge of the World. It has been installed there since 2000 and can be considered as the beating red heart of the Kanaal site. The ground floor of the eight concrete silos at Kanaal, originally belonging to the malting complex, will house a series of historical pieces curated by Axel Vervoordt which relate to artists represented by the Gallery and the company’s way of looking at art. On the property, an original 19th century chapel has been carefully restored as the new home for the permanent installation of James Turrell’s light work Red Shift (1995). Since 2007, this work has been on display at Palazzo Fortuny in Venice, where Axel Vervoordt has curated six exhibitions in collaboration with the Fondazione Musei Civici di Venezia. Now, ten years later, the work has been re-installed in a new setting in collaboration with James Turrell’s studio. 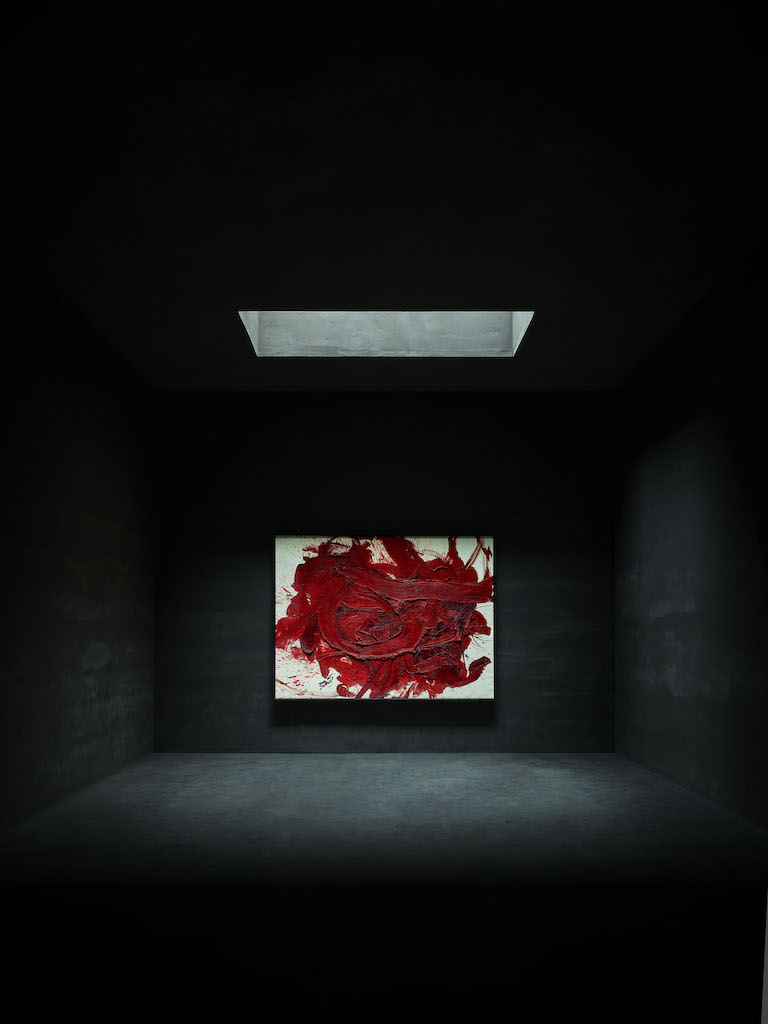 A work by Kazuo Shiraga.©Axel & May Vervoordt Foundation

In January 2011, the Axel Vervoordt Gallery opened in the Vlaeykensgang in the heart of Antwerp. The work of ZERO, Dansaekhwa and Gutai artists form the core of the gallery activities, with a further addition of established and young artists whose spirit converges with the gallery’s interest in the concepts of the void, space and time. The gallery, lead by Boris Vervoordt, moved to a new space at Kanaal in March 2017. It also expanded internationally in May 2014, opening a new exhibition space in the heart of Hong Kong, in the Entertainment Building, offering a complementary programme of specially commissioned works. Meanwhile, Axel Vervoordt Gallery has become an important platform for internationally renowned artists to participate in the radically-changing art scene in Asia. By having a physical presence in Hong Kong, it continues to bridge artistic expressions between East and West.

Views of the show by El Anatsui in the Kanaal’s Patio Gallery.©Axel Vervoordt Gallery

The three opening exhibitions of the gallery new spaces at Kanaal present, among others, new exhibition of the Belgian sculptor Lucia Bru. This so-called Escher Gallery, due to its resemblances with the complex and mysterious designs of the graphic artist MC Escher, dates back to the 19th century period of the distillery and was later used in the malting complex containing large circular silos. Lucia Bru sculptural installations are a delicate dialogue between the vulnerability of the naked object and the surrounding space in which it tries to find its place. She creates her own unique form language, based on pure geometrical laws, yet distorted by the reality of her own body. She consciously adds human insecurity to geometrical structures, which lends a special narrative power to her abstract, visual vocabulary. Her objects are small incarnations of human vulnerability; they are a breath in abstract space. Lucia Bru works with different materials ; the commonality between all of them is a certain fragility and a certain vulnerability of being and that of its creator. Another inaugural exhibition, in the Kanaal’s Patio Gallery, presents Ghanean artist Brahim El Anatsui’s last works. Made of aluminium bottle caps and the labels of liquor bottles that are stitched together with copper wire to create sculptural installations often mounted to the wall like a three-dimensional draped tapestry, these internationally acclaimed creations, by the transformation and reuse of simple, everyday materials, draw attention to contemporary ideas about waste, consumption, and recycling. Finally, on the Terrace Gallery, a large solo exhibition of Saburo Murakami (1925-1996), Japanese painter and pioneer of performance art is on view. This exhibition brings together a large selection of important paintings from the 1950s through the end of the 1960s. Keen to explore new approaches to art, Murakami formed the Zero-kai (Zero Group) together with, among others, Kazuo Shiraga in 1952. He was also one of the best-known members of the Gutai Art Association.