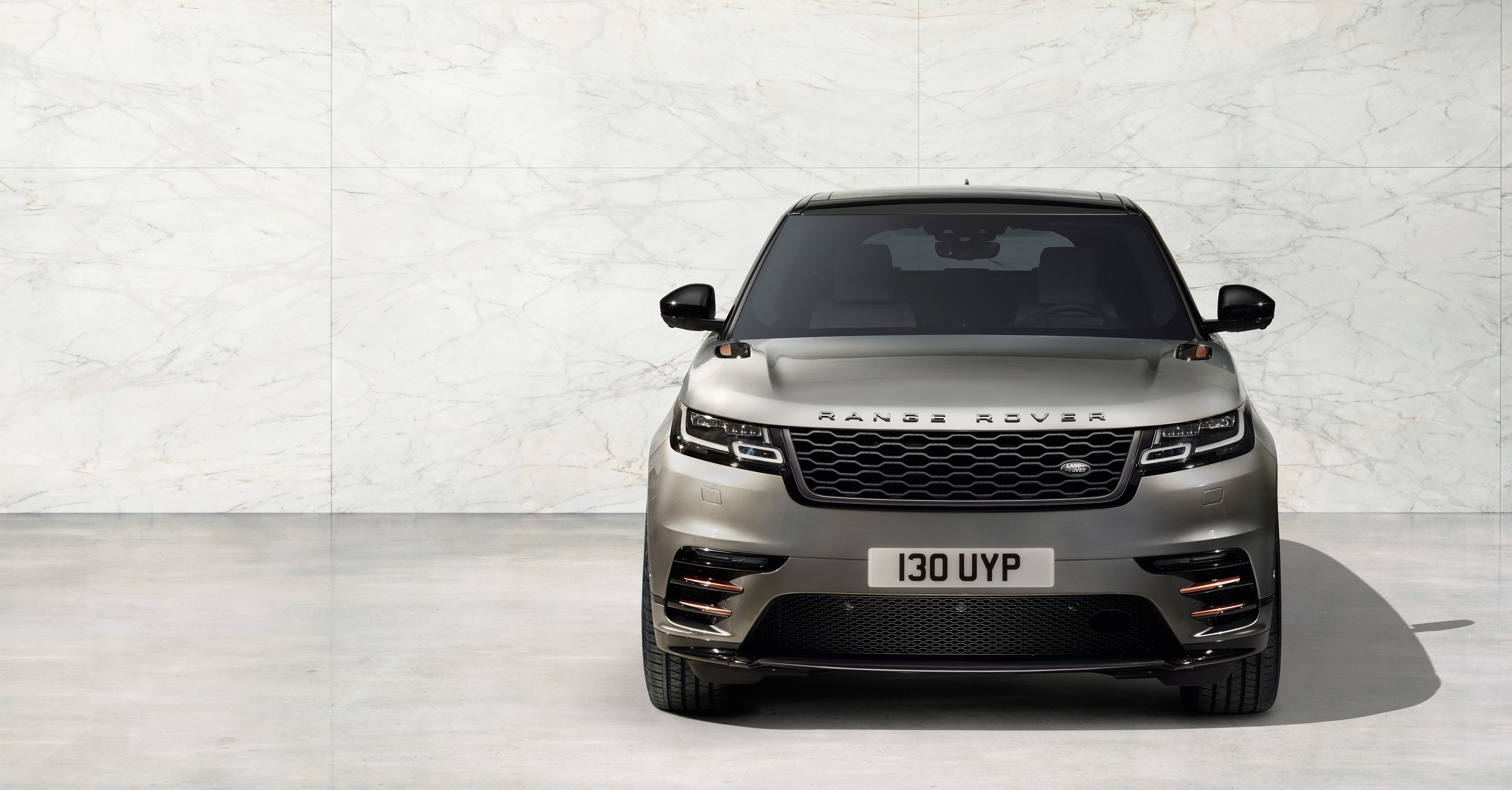 The all-new Range Rover Velar was supposed to fill the white space between the Range Rover Sport and the little Range Rover Evoque—a gap that has plagued Land Rover Range Rover since the first Range Rover rolled off the Solihull, England, assembly line just five months before the Beatles released Let It Be. Whether filling that white space is what the Velar’s goal should be, it has set a new standard for beauty in a class of cars desperately short on looks.
The Range Rover Velar is very much chasing the luxury compact crossover segment-within-a-segment, playing catch up with BMW X3, Mercedes GLE, the Lexus RX; It’s bigger than the Evoque but smaller than the Sport. It also uses what is for Land Rover a new platform, sharing its underpinnings with the Jaguar F-Pace, which maybe also gives you an idea of its size. 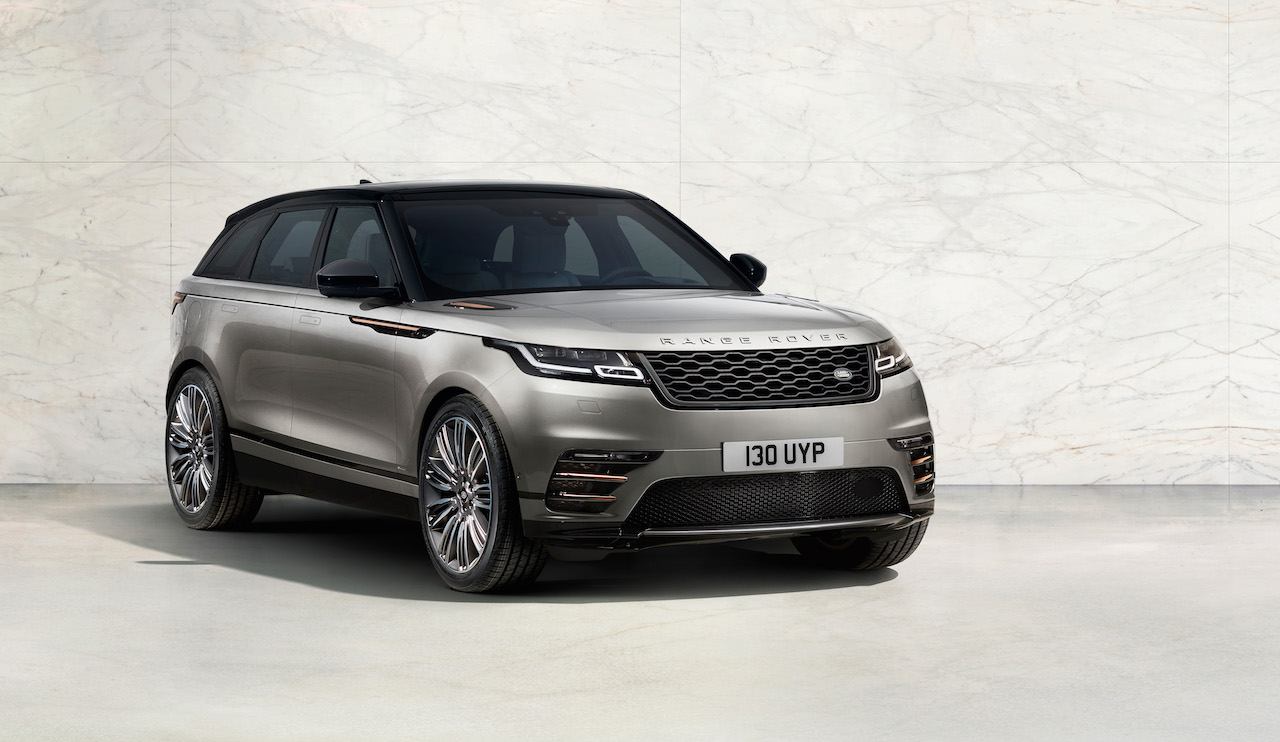 The Velar is a study in minimalist design. In that sense, it’s spiritually not all that different than the first Range Rover, which was given the internal designation “Velar” as a sort of nod to the Latin or Italian verb, to disguise. The floating roof—a marque signature—finds its most successful home in the Velar. 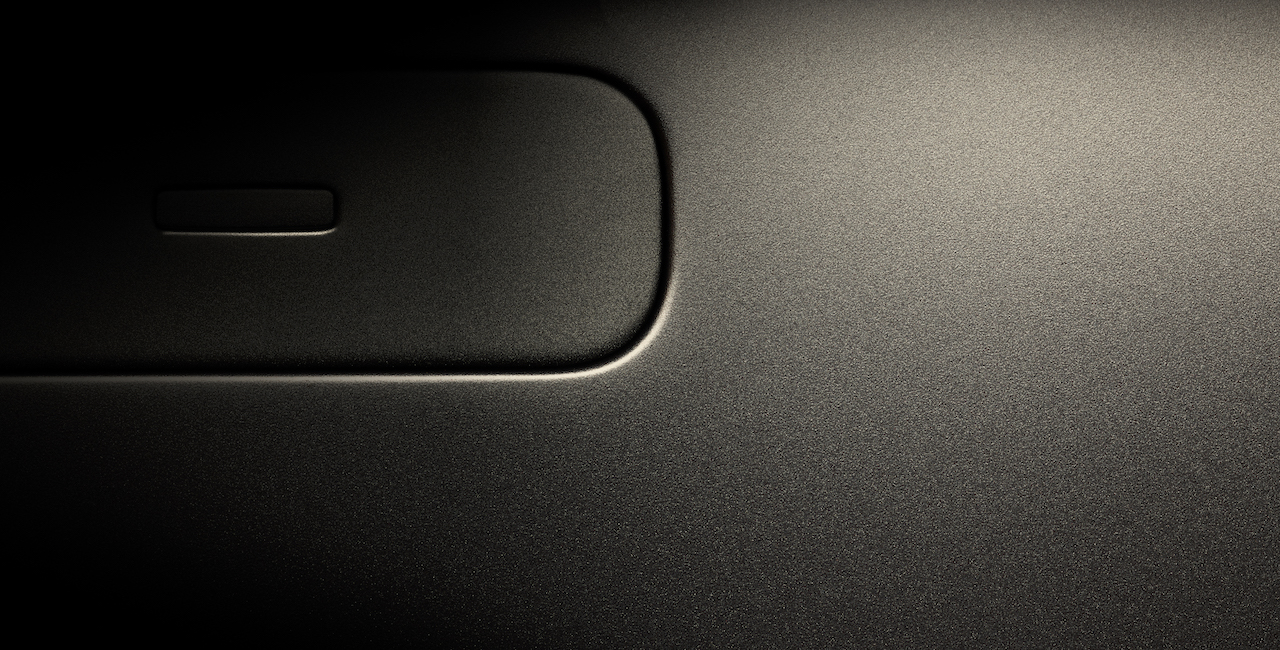 The Velar’s silhouette is quite fast, marked by a rising belt, falling roof, pinched tail and a lot of screen rake. The surfaces are pure as snow. Especially around the nose, it’s naked of step-lines, the grille, lamps and bumper meticulously flush. Which makes the numberplate plinth stand out like a flesh wound. Also the fake vents on the bonnet and below the door mirrors. 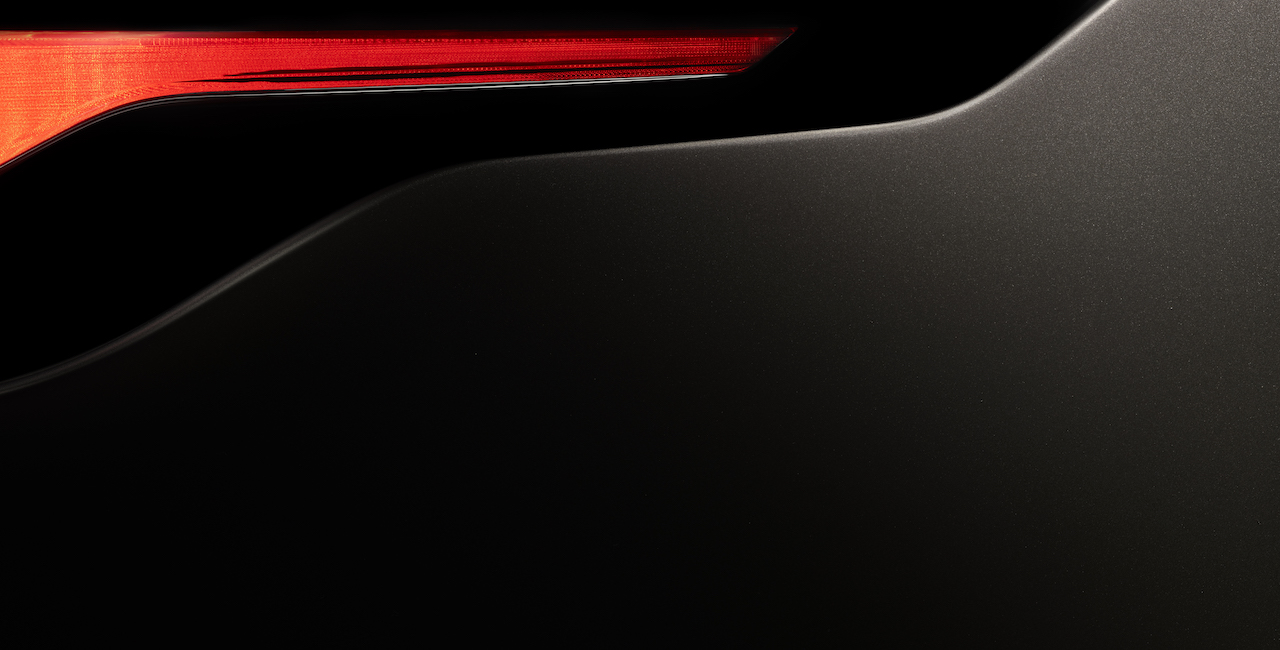 But in all it’s a very well-worked shape, and if you see it alongside a range Rover Sport you instantly see how the skin has been pulled tight, the roof dropped and the details finely slimmed. 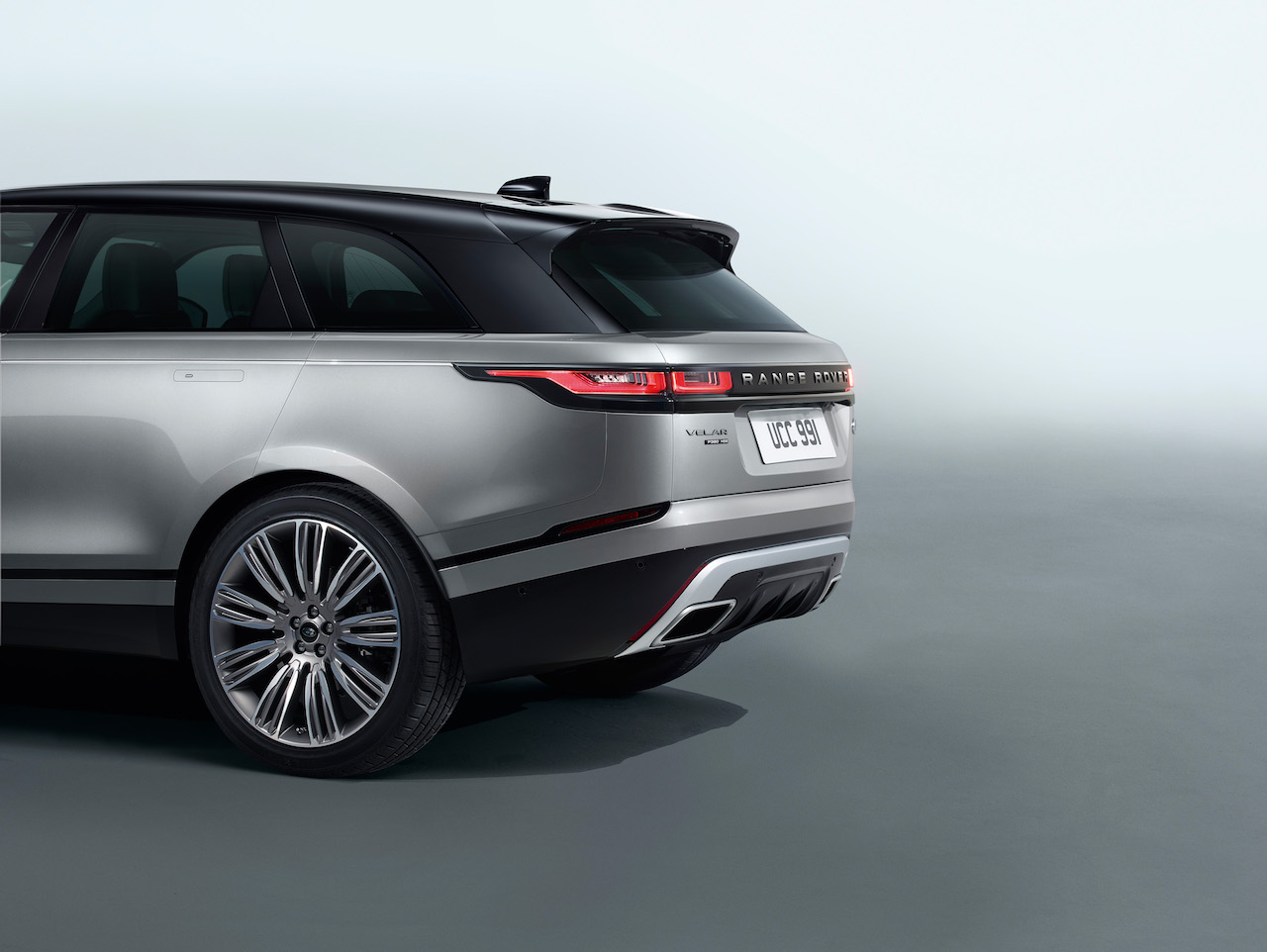 On the inside, the Velar is an escape capsule, refined and quiet.
One of the most striking features of the Range Rover Velar is its interior. Not only is it minimalist and elegantly designed but there’s a focus on technology that we haven’t seen before from Land Rover.
The cabin is even more of a revelation, for the way style and function meet in an all-new glass-cockpit system for displays and controls. 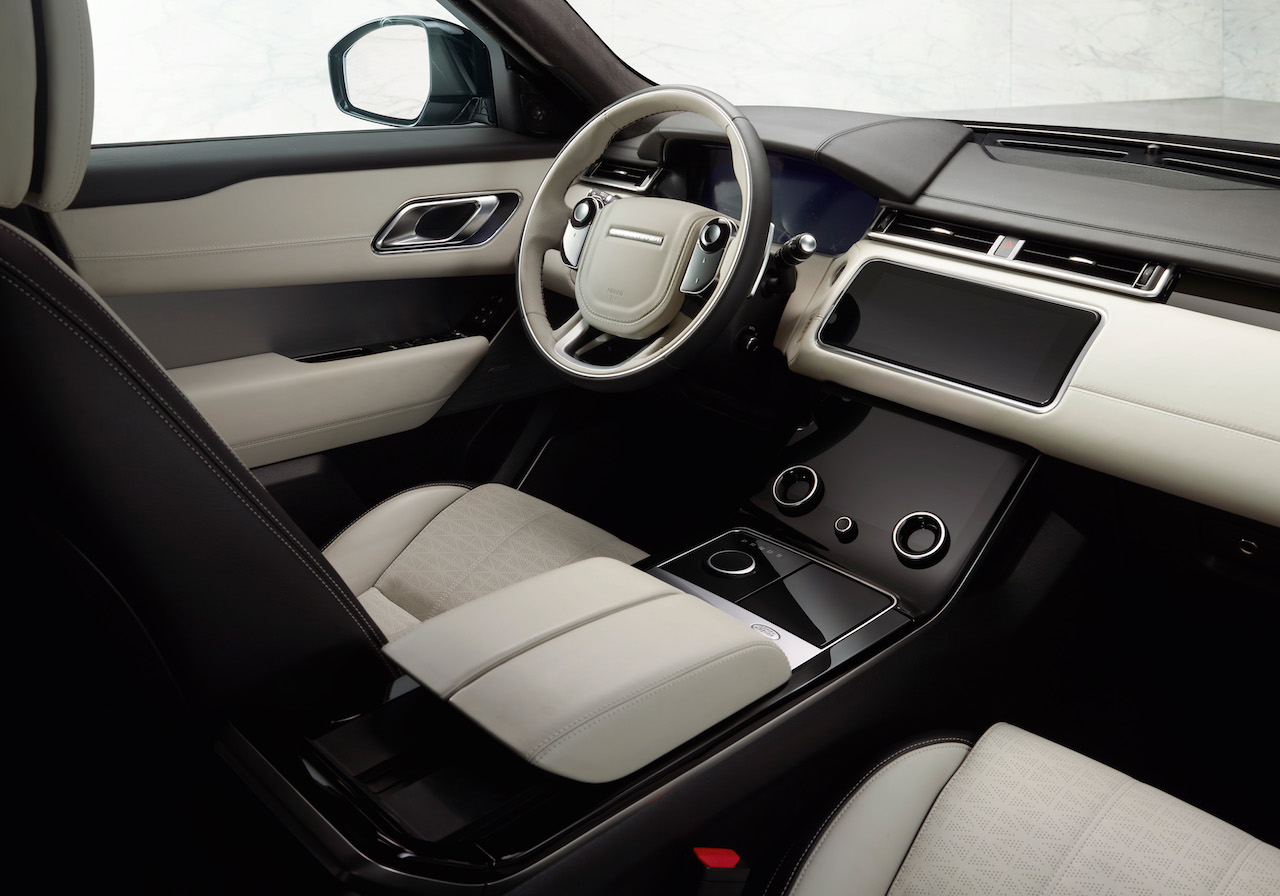 Ahead is Range Rover’s usual minimalist rectangle of leathered dashboard, with a T-piece coming down as the center console. The shapes are clean, sparsely ornamented but wrapped in subtle, plush texture. The doors carry big planks of wood, but a reserved, monochrome grain. The perforations of the seat leather and speaker grilles quietly align themselves into Union flag motifs. The screens’ frameless integration serves the minimalism.

What’s better than a touchscreen infotainment system? According to Land Rover, the answer is two of them.
All Velars get a pair of 10.0in touchscreens: one where you’d expect it to be, towards the top of the dashboard, and the other below it, just in front of the gear selector. This second screen is the one that you use to access the air conditioning and off-road modes, but you can also operate the multimedia system through it while the main screen continues to display the navigation. 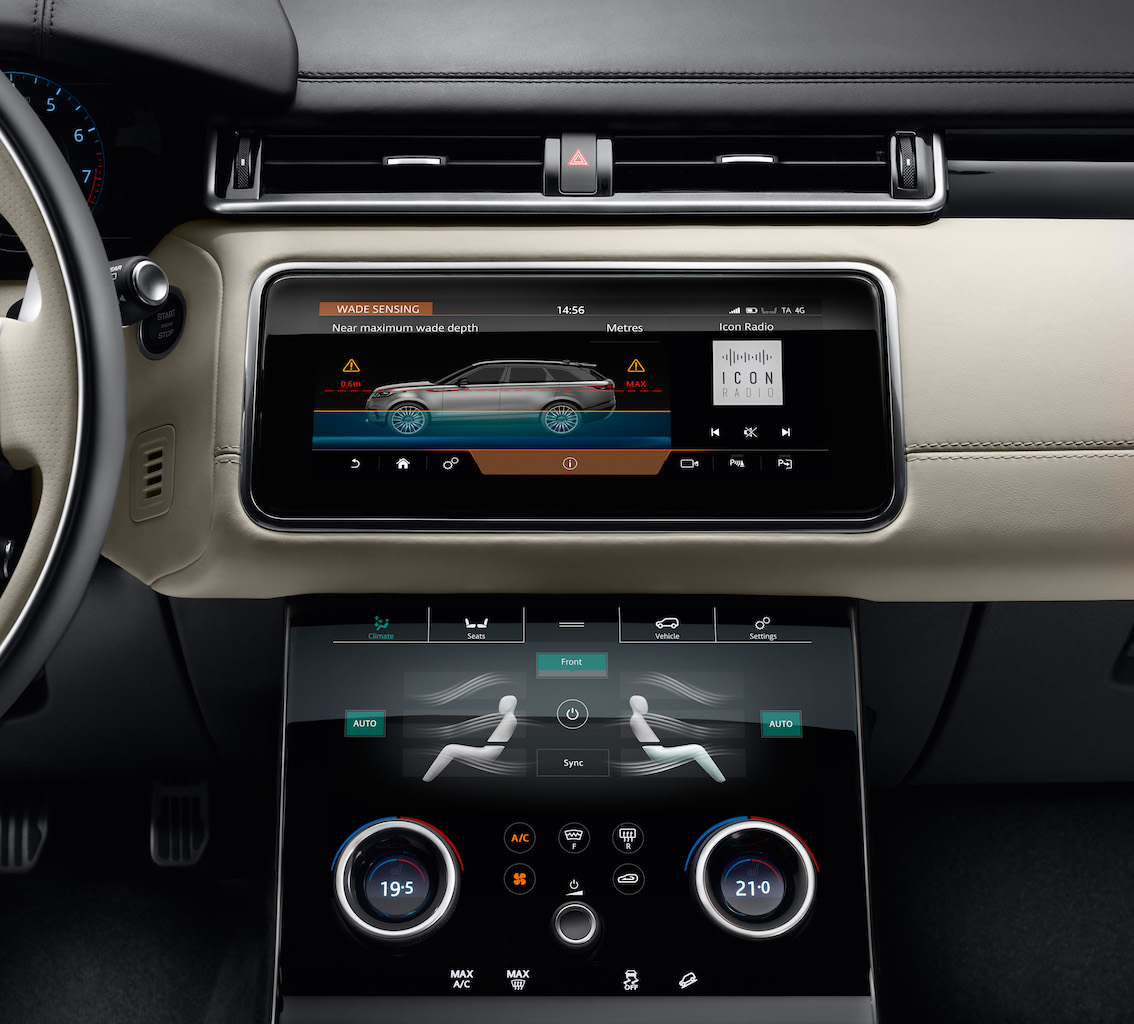 You soon realize this is a whole lot easier than using a touch-screen alone. And those wheels have other context-dependent functions, each time changing their markings to suit. If you hit a tab that replaces the climate screen by the dynamics mode screen, you can change off-road mode with the knob.

You’ve also got a reconfigurable set of TFT driver instruments. Plus a head-up display. With all this screen area, some of which can be sub-divided at will, it’s easily possible to have everything you want on show all the time. You don’t have to keep jabbing at buttons for ‘nav’ ‘media’ or ‘car’ because they can have a screen each. This makes it far easier to use than many screen-based systems.

For instance on a long drive through unknown country you can swipe the music display and controls down onto the lower screen, then use the upper one for a full north-up map, and have your 3d local map in the instrument cluster. If you’re swapping often between dynamic modes, leave that on the bottom screen, and divide the top screen to show entertainment and nav, and have your trip computer in the instruments.
It’s not just about smooth graphics and shallow menu structures. There is enough processor heft too: the response times are quick and the touchscreens sensitive but not jumpy.
Even the steering wheel’s buttons are context-dependent, touch-sensitive and stroke-responsive, and their backlit typography and pictograms come and go with the situation and disappear to black when irrelevant.

The system has fast data, serves as wi-fi, does fancy mapping and has a bunch of apps for remote control and travel and commerce.
It’s very easy to get comfortable up front. There’s plenty of adjustment in the seat – especially if you have electric seats – as well as in the steering column, so getting a good driving position is easy.

While there is plenty of room up front, helped by the minimalist design and the panoramic sunroof (if fitted), space for rear seat passengers is a little tighter than it should be but it’s OK for most adults though, and they get ports and vents and lights. 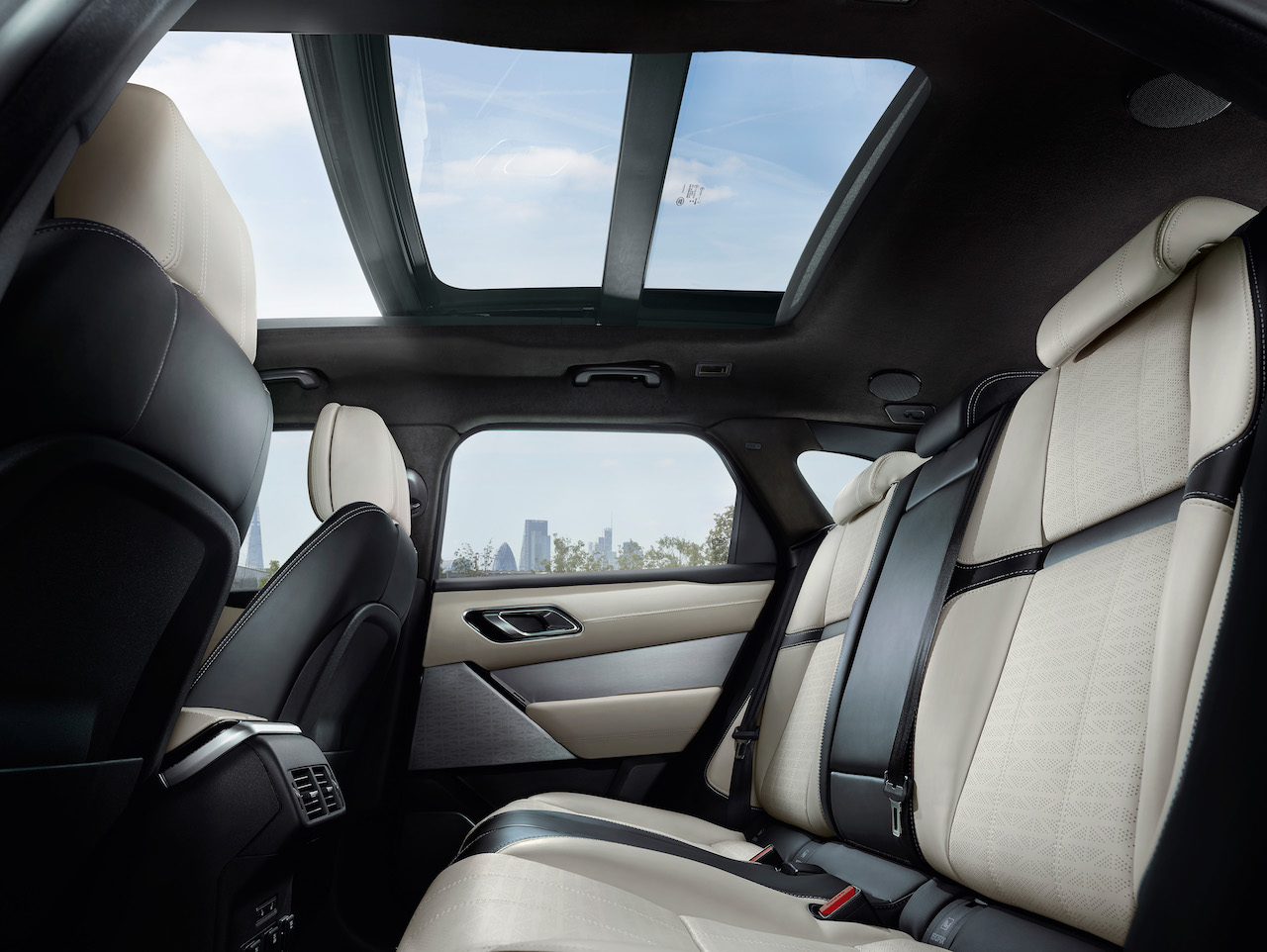 Cabin storage is tight. There’s no deep storage bin in the center console but the boot room is good though.
Special mention to the optional Meridian sound system, which sounds like music rather than like a music system. That’s unusual in a car.

Another option is the textured cloth upholstery, for vegetarians who don’t want leather. The Velar is relatively easy to get into compared to other larger Range Rovers thanks to its lower driving position,

The engine range is broad, with a 2.0-litre diesel in 180bhp and 240bhp outputs, and a 2.0-litre petrol in 250 and 300. The performance steps between them are roughly what you’d expect: between six and nine seconds for 0-100km/h. Even so, it’s still quick for such a big, hefty SUV, as long as you don’t mind revving it hard. 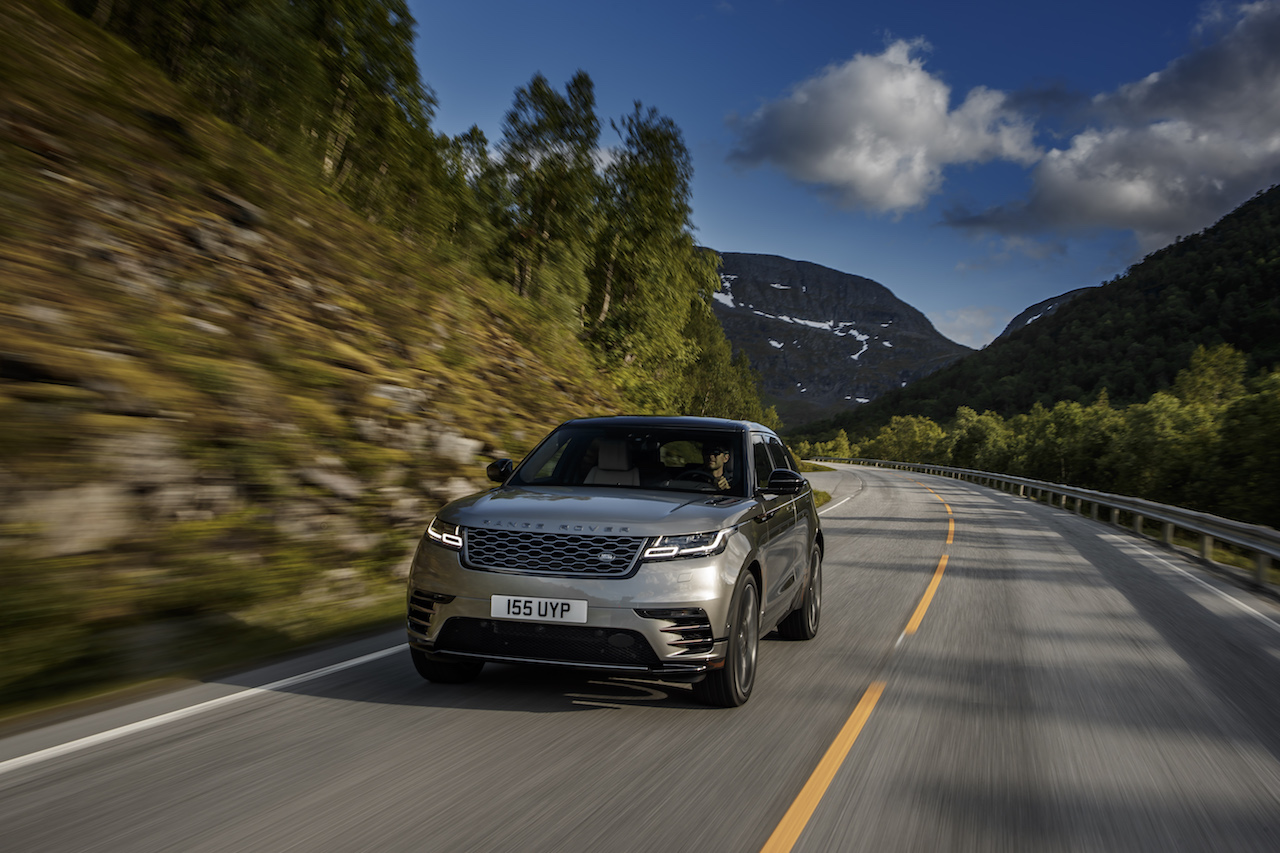 On the road, the Range Rover Velar is well balanced in corners and smooth as glass on highways, with all that perfectly balanced steering feel that Range Rover puts into its product. For the passenger, it is a magic carpet ride. Road noise is pretty well contained.
It is possible to drive it quickly thanks to plenty of grip, but that slightly ponderous nature means you don’t feel particularly inclined to do so. In this respect, it feels like a true Range Rover.
At least all Velars come with rear parking sensors, while S trim adds a rear-view camera as well. And if you are really worried about parking then there’s always the HSE trim, which gets a park assist system that will locate a space and steer you into it. This is also an option on lower trim levels. 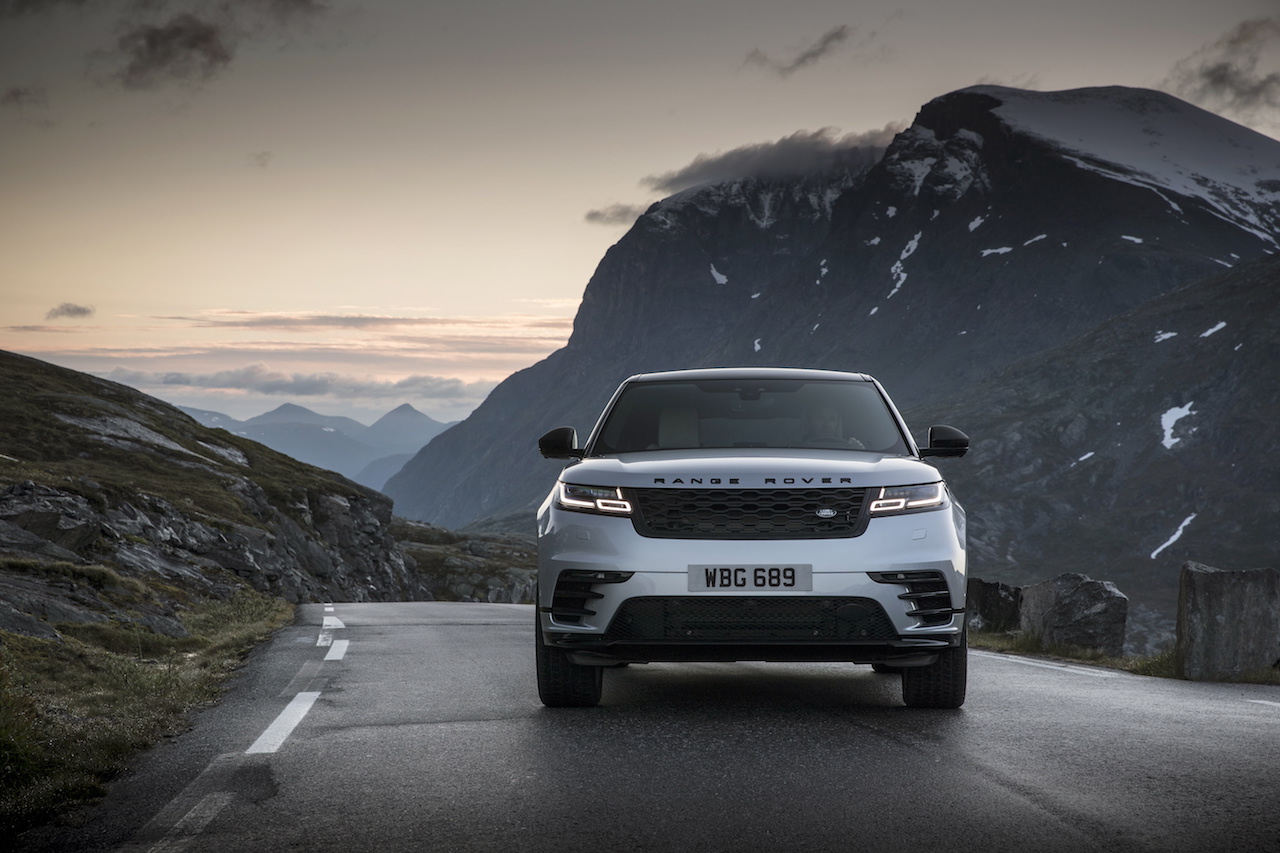 The Range Rover Velar is the SUV of the moment. Its slippery shape and stunning interior make it ultra desirable. It’s roomy enough for a couple of friends and not so big it’s awkward in cities, and capable of unusual off-road feats.
The Velar’s cabin and new display/control system are good to use, and beautiful. It’s not just the interior that shows the future either. It’s a nice place to be in the long-term, but the initial impact is stunning. Give anyone a lift and they’ll be wowed.
When the Velar was first announced, more than a few wags wondered if the white space between the Range Rover Sport and the Evoque actually existed. After spending a few days driving it, and watching it at rest from the window of a restaurant, it becomes obvious that Range Rover has done more than fill a product gap: it has made its most beautiful car yet.