When Volkswagen launched the Passat CC back in 2008, pseudo coupes were on the bleeding edge of automotive fashion, and VW seemed to have its finger on the pulse of public desire..
It isn’t a replacement for the four-door Passat coupé. And no again, it is not a replacement for the Phaeton. So the Arteon, then, is a car that replaces nothing!
The Arteon is essentially a Passat, but it’s slightly longer, lower and wider, with a distinctive coupé-like roofline that tapers smoothly into the boot, giving it a swankier, more upmarket appearance.
And that’s exactly the way Volkswagen pitches it: an upmarket car to rival the likes of the Audi A5 Sportback and BMW 4 Series Gran Coupé. Like those two, the Arteon retains the practical four-door layout of the saloon upon which it’s based, so along with style comes almost as much practicality. 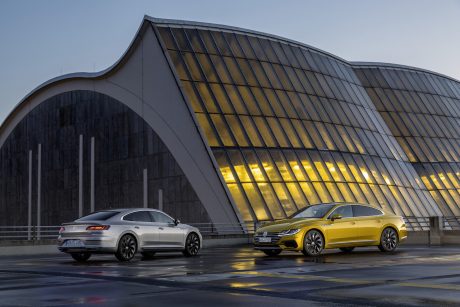 And, ooh, its look amazing! Usually, when I come to pick up a press-car, I’m in a rush and I’m distracted by whatever, so I don’t spend a lot of time walking round whatever car’s turned up, stroking my chin. I just drive off. 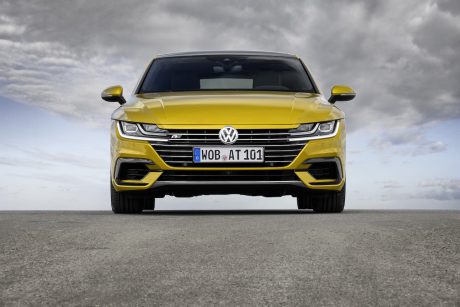 But with the Arteon, my shoes made a comedic squeaking noise as I came to an abrupt halt. It quite literally stops you in your tracks, not because of the wide grille that makes the car look lower and more ground-hugging than is the case, or the four pillarless doors, or the in-your-face mustard paint job German love!
No. It’s the way all these things line up behind the VW badge. And there’s more. It’s huge.
Volkswagen has fused stretched dimensions and fastback design into the sexy, spacious five-passenger car.
The Arteon’s best face is quite literally that: a coupelike mug that looks as if it could grace a new Scirocco rather than a largish sedan to sit above the Passat in VW’s lineup. 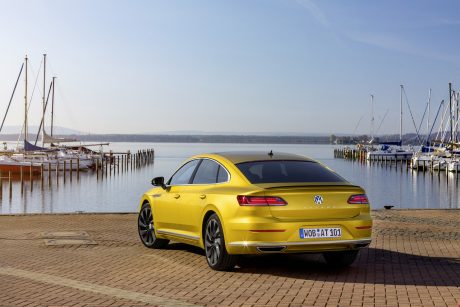 The rest of the Arteon’s four-door “coupe” styling eschews the sleek look of the old CC for a tough, fastback design with fat haunches and a quasi Kamm-tail hatchback.

So the Arteon takes a dramatic step beyond both the CC and the Passat, not only in styling but in size. This allows for a rear seat that’s exceptionally roomy, so long as you have no plans to use the middle spot. Leg- and elbowroom are plentiful, and tall passengers should be able to ride in the back without bumping against the headliner. 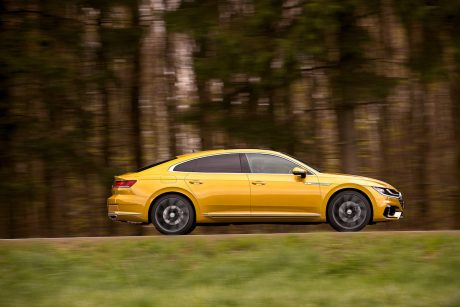 Entry-level Elegance trim gets you electric adjustment for the driver’s seat backrest recline and four-way lumbar adjustment, and manual adjustment for everything else, including height. Multi-way electrically adjustable seats are an option. The seats themselves are quite flat and wide, but give good support and should keep you twinge-free on a long trip. 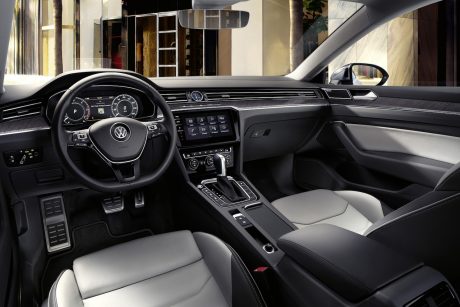 Visibility isn’t bad for a coupé-like car and no worse than its rivals: fine forward, but hampered slightly backwards by the narrow rear window and thick, steeply angled rear pillars. Front and rear parking sensors are standard, though, and a rear-view camera is an option
The company’s new 8.0-inch infotainment screen comes standard, and its supplementary Digital Cockpit, a concept borrowed from Audi that replaces the main gauges with a huge TFT screen, is an option. It’s pretty smart and it also includes Apple CarPlay and Android Auto smartphone mirroring as standard. You can upgrade to the Discover Pro system with a larger 9.2in touchscreen and gesture control, but there’s really no need, because the standard unit is so good. 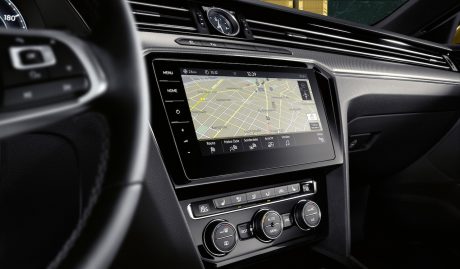 Volkswagen’s Active Info Display is standard. This 12.3in TFT screen replaces analogue instrument dials with digital representations. These can be configured to clearly show lots of additional information, including sat-nav maps and phone contacts. 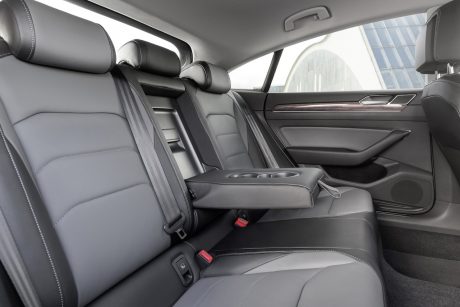 The Arteon has loads of space up front and offers more rear leg room than those rivals, but, as with all of these four-door coupés, the sloping roofline takes its toll on rear head room – taller rear passengers will certainly find their heads not far from the roof lining.

The boot is huge. And if that’s not good enough, you can also fold flat the 60/40-split rear seats to create 1557 liters of space and more than two meters in length between the front seats and boot lip.
There are two trim levels to choose from, and both are extremely well equipped. A few options you might want to add are adaptive dampers (DCC), keyless entry with electric tailgate operation, metallic paint and the rear-view camera. 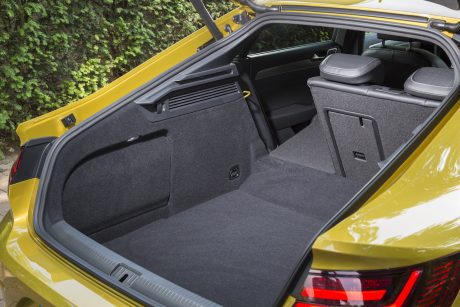 The Arteon is a big car with an engine that falls short of delivering the thrills promised by its styling. Our drive was in a car with a 187bhp turbocharged 2.0-litre mated to a seven-speed dual-clutch automatic transmission. It delivers good mid-range welly to easily build speed on motorways without the need to change down all the time. For most people, that should do the job quite nicely.
I have tested it again with a twin-turbo petrol and it proved quicker in pretty much every respect.
So for those who love a bit more oomph, it’s properly fast, as its 0-100km/h time of just 5.6sec attests. 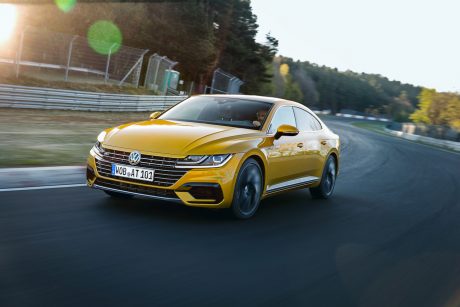 Depending on which engine you choose, it’ll come with a six-speed manual gearbox or seven-speed DSG automatic. The manual is smooth and light to use, while the auto shifts slickly on the move.

The Arteon is sold as a sportier model and, as such, it gets tweaked suspension to make it much better planted through corners than the Passat, with lots of grip.

The Arteon rides pretty well. It rides well both at motorway speeds and around town.
The standard suspension is similarly compliant at speed but more unsettled in town, especially when paired with larger wheels.

As standard, the Arteon’s these include automatic emergency braking with pedestrian sensing, traffic sign recognition and lane departure warning. You can add blindspot monitoring and a feature called Emergency Assist, which will bring the car to a controlled stop, including steering it, if the driver becomes unresponsive.

It’s a little pricey but the Volkswagen Arteon is stylish, very spacious and amazingly practical. It’s a perfectly nice car and it does everything very competently and rides nicely as well.