With its huge palm grove and the red-ocher colour of its buildings, nestled at the foot of the imposing foothills of the Atlas Mountains, for decades Marrakech has been a popular tourist and gay destination but, until recently, sitting a little too much on its laurels. At the COP22, the 22nd Conference of the Parties to the United Nations Framework Convention on Climate Change, held in Marrakech in November 2016, we owe the new face of the city.

A traveller, who has not been there for a long time, would have indeed some difficulty in recognizing Marrakech. With a brand new airport, completely brand new streets, cleaned and cleared of stray dogs, the city lives like a new youth and feels the sap of modernity rise in it. Corollaries of this Renaissance : many cultural initiatives, often private, including the opening of the Yves Saint Laurent Museum, which enrich its offer and attract a new transhumance, that of the planet arty, in search of the young shoots of local contemporary creation, Moroccan and Maghrebian, but also of the African scene as a whole. Remaining faithful to its roots, the Red City is therefore fully in the 21st Century.

The renewal of a city

It was under the French protectorate, affirmed in 1934, that Marrakech gained an international reputation, thanks to the comings and goings of traders and representatives of Western companies, attracting not only politicians and businessmen, but also artists, among others writers, musicians, photographers, … Thus, while the country regained its independence in 1956, just a decade later, in 1966, makes the fashion designer Yves Saint Laurent a first stay in the city which will have a great influence on his work and his colours. 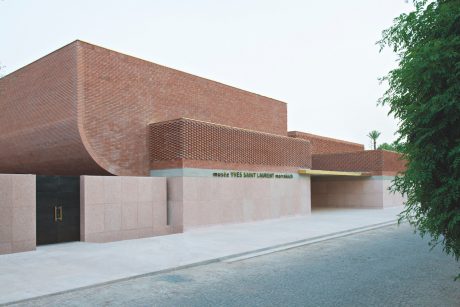 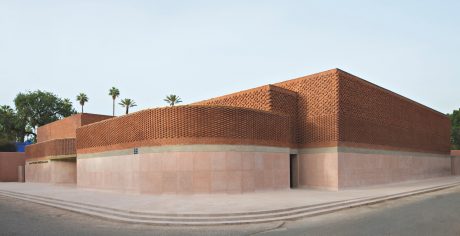 With his companion, Pierre Bergé, they will also acquire the famous Majorelle Garden, fully restored by their care, and the nearby Villa Oasis which, twice a year, on December 1st and June 1st, will host a fortnight during the designer’s quest for inspiration. 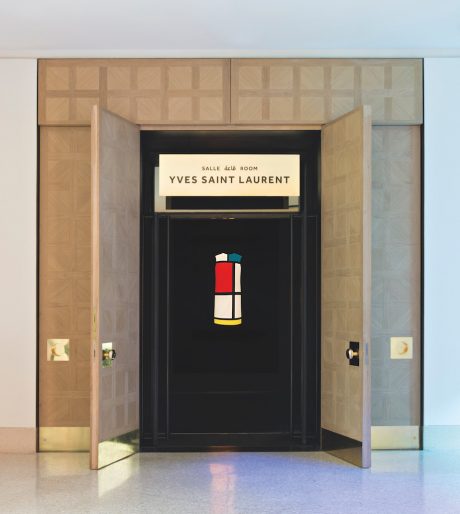 Well preserved, today the house can be visited by appointment, for a fee … On the other hand, the flamboyant Jardin Majorelle, with its superb museum dedicated to Berber culture, as well as the museum dedicated to the couturier, opened since October 2017, are accessible to all and really are worth the trip. It is also, to a large extent, to this institution, with its resolutely contemporary architecture, but inscribed in a local tradition, that we owe this new media appetite for Marrakech, while the city has been traversed for years by a cultural and intellectual renewal carried by a youth, trained to international standards, but deeply rooted in the local culture, and who wishes to contribute to the emergence of Morocco on the international scene. 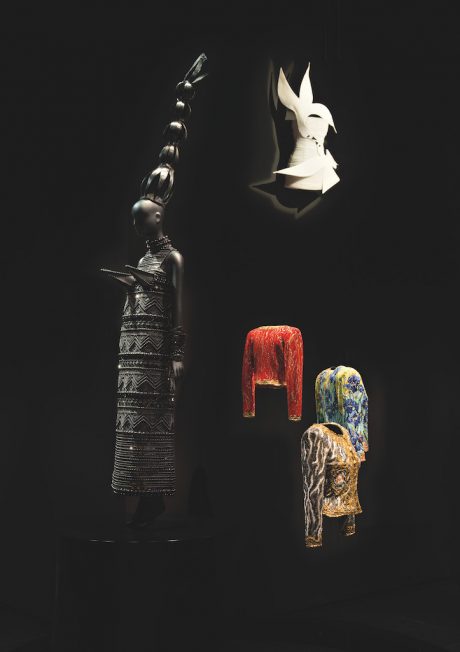 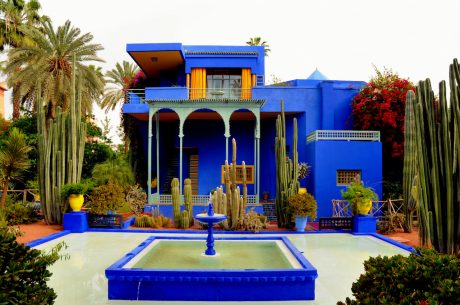 ©Majorelle Garden Foundation
View of the Villa Majorelle, in the garden of the same name, with its particularly deep blue. 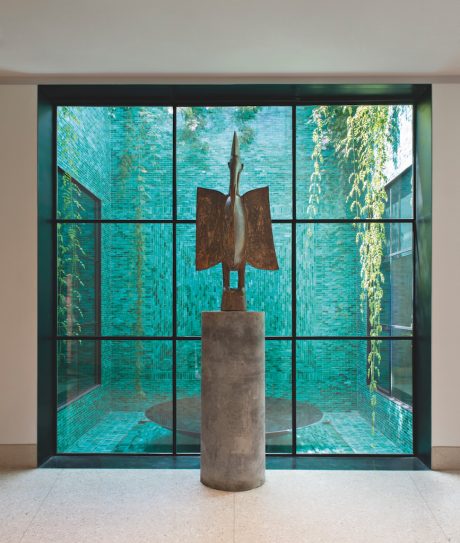 It is also a bit at the fair 1-54, whose first African edition was organized in Marrakech last February, that we owe this spotlight on Marrakech. Certainly, this initiative of Touria El Glaoui, a native Moroccan and a great connoisseur of contemporary African art, is not the only one. The MACAAL, Museum of African Contemporary Art, also officially opened last February, on the exhibition Africa Is No Island (until 24-08) devoted to emerging African photography. Unofficially inaugurated at COP22, the institution is an initiative of the Alliances Foundation, led by the Lazraq family, active in real estate. It is also responsible for the adjacent complex, Al Maaden, which in addition to a residential complex and a superb golf course is home to a vast sculpture park offering breath-taking views on the Atlas. 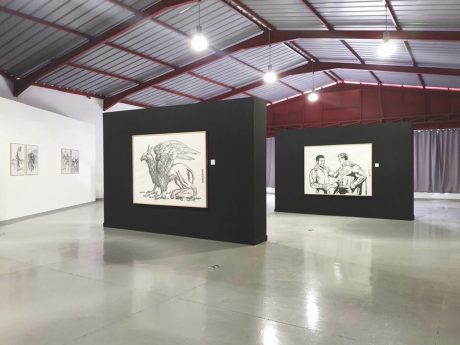 It was also on the occasion of the COP22 that the gallery Le Comptoir des Mines, dedicated to contemporary Moroccan creation, was inaugurated in an Art Deco building in the district of Guéliz. A real artistic hub, this district has many other galleries (David Bloch, 127, Black on White, …) as well as the new MACMA museum, which focuses on the art and culture of Marrakech, including modern painting. Initiated by Nabil El Mallouki, a former banker converted into an art dealer, the institution also has a counterpart in the medina, the Orientalist Museum, installed since last February in a superb and fully restored 17th Century riad. This new museum is located in the immediate vicinity of the Ben Youssef Madrasa (16th Century) and the already famous House of Photography of Marrakech, inaugurated in April 2009 in an old fondouk by Patrick Manac’h and Hamid Mergani. A fifteen minute drive from the medina, on the road to Fez, it is also possible to visit, upon request, the extraordinary property of Jean-François Fourtou, Dar El Sadaka, where the French artist has installed his workshop with among others, the famous House fallen from the sky and the no less impressive House of the giant. A little further, in the same direction, one can visit every Saturday the beautiful spaces of the Montresso* Art Foundation, created by Jean-Louis Haguenauer, a contemporary art enthusiast who welcomes, in his Jardin Rouge, African artists in residence. The venue proposes (until 31-05) a collective exhibition on the question of monumentality.

So, let yourself be tempted by these many places, to (re) discover ! You will dive into the sources of Orientalism, because it is in Morocco that Eugene Delacroix made his famous initiatory voyage in 1832. But also, you will see there beat the heart of a moving Africa ; Marrakech dreaming, indeed, to become the capital of contemporary African creation. Unless a stroll on the famous Jemaa el-Fna place, or through the souks and winding alleys of the medina, in search of the jewels of a thousand-year-old culture, is no longer to your liking ? The many gardens of the city, including the newest of them, Le Jardin Secret, with their lush flora and chirping of many birds, are equally enchanting…

A passport, valid for at least 6 months after the date of return, is imperative to travel to Morocco. The best times to visit Marrakech are spring, early summer and autumn. For more information on the cultural offer and tourist accommodations : www.visitmarrakech.ma 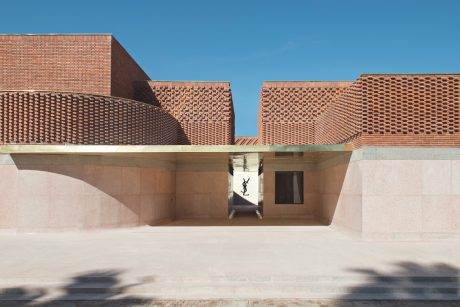 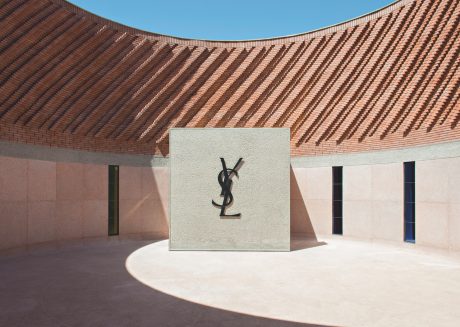 Designed by the architects of Studio KO (Paris), the Yves Saint Laurent Museum of Marrakech (MYSLM) has been open since October 2017. Externally, the building, earth-coloured, is presented as an assembly of cubes and curves, dressed in a brick lace evoking the weave of a fabric. These bricks, in terracotta, are made of land of Morocco and locally manufactured. The granito, in front and on the ground, consists of an aggregate of local stone and marble. 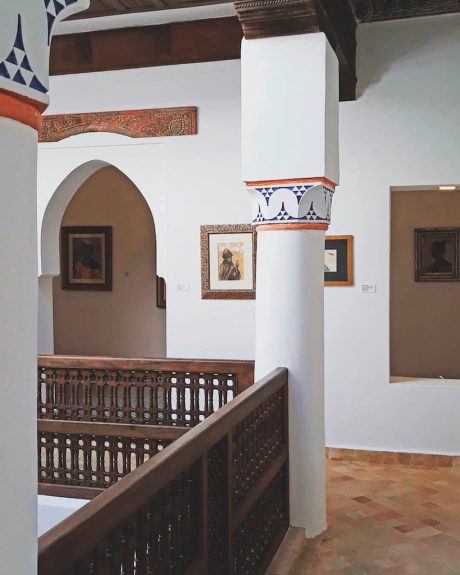 © Stapico
The riad which hosts the Orientalist Museum, opened in February 2018 in the medina of Marrakech, is in one of the oldest districts of the city. Its architecture, restored identically by the good care of its current owner, Nabil El Mallouki, dates back from the Saadian era (17th Century). 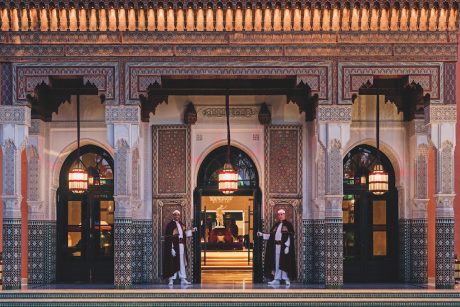 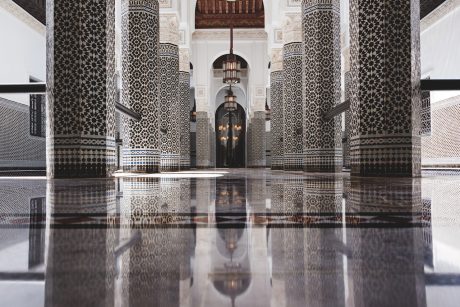 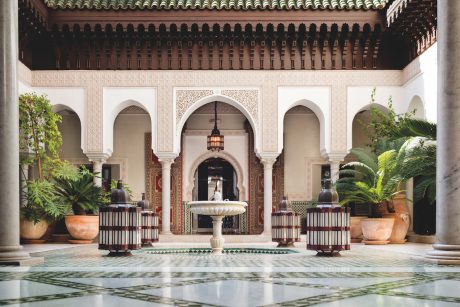 The mythical hotel La Mamounia is, without doubt, one of the most beautiful palaces in the world. In the 18th Century, it was a garden, backed by the ramparts of the old city, which belonged to the Sultan Sidi Mohammed Ben Abdellah. He draws the gardens for his son, prince Mamoun, and offers them as a wedding present. The name of Arsal al Mamoun was then given to them by the prince, name later changed into Arsat Mamounia. 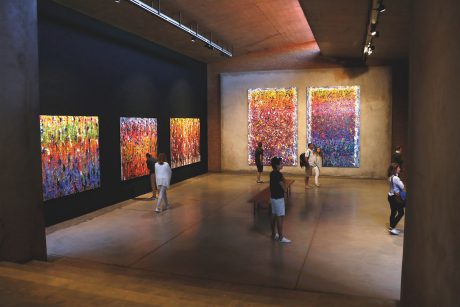 The art space of the Montresso* Art Foundation, together with the Red Garden, host exhibitions and artist’s residencies, mainly of African artists. 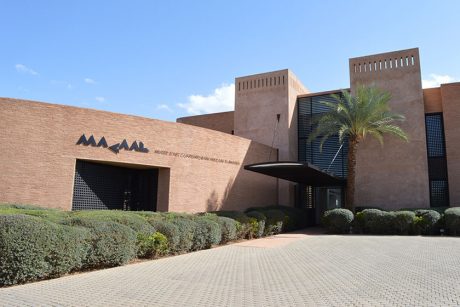 © Courtesy of MACAAL Museum
The facade of the new museum MACAAL / Museum of African Contemporary Art Al Maaden, officially inaugurated, by the Alliances Foundation, in February 2018. This old storage space has been converted into a museum by the architect Didier Lefort (DL2A). It is now part of the Al Maaden real estate complex. 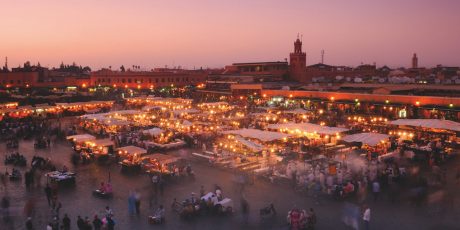 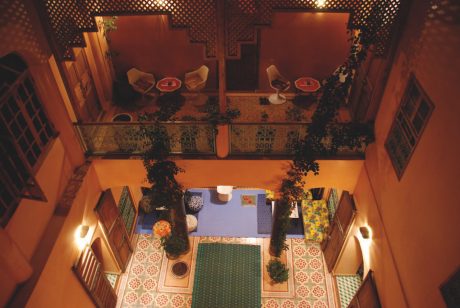 Hidden on the medina just in the spices place Rahba lakdima, Riad Yima is a spectacular labour of love that took three years to complete, with every detail very carefully made by the artist Hassan Hajjaj’s hand. 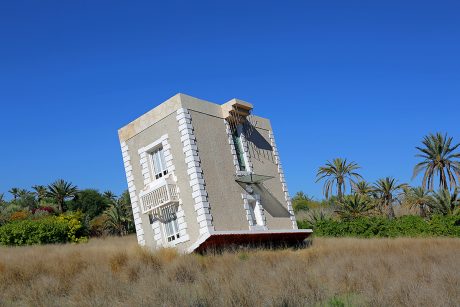 © Dar El Sadaka / photo: Maxime Dufour
It is on his eleven-hectare property, Dar El Sadaka, located in the heart of the palm grove of Marrakech, that the French artist Jean-François Fourtou realized his childhood dream by building a house upside down. This House fallen from the sky (2011) is a perfect reproduction of his grand-father’s house.