Inaugurated early on this June, in the presence of the International Gotha of Art attending a party lead by french singer Camille, the Villa Carmignac on the island of Porquerolles, off the Mediterranean coast, is a dream come true. The idyllic setting of a protected natural park now serves as a showcase for the collection of works of art brought together by financier Edouard Carmignac and his son Charles. 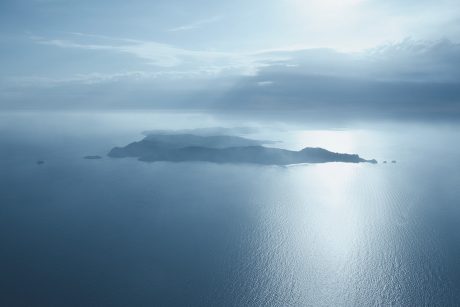 It is in Porquerolles, a forest in open sea, that the foundation created in 2000 at the initiative of Edouard Carmignac, awaits the public. In an exceptional setting, you will discover the contemporary art works of the Carmignac collection, temporary exhibitions, a sculpture garden and a cultural program. 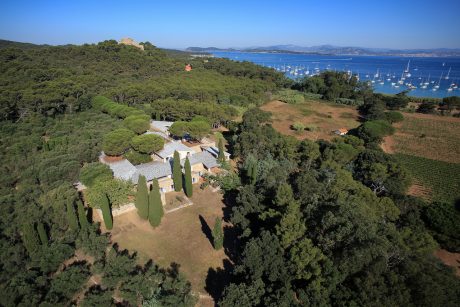 The island of Porquerolles – together with its sisters Port-Cros and the gay-friendly île du Levant, famous for its naturist beaches – owes its state of conservation to the fact that it is owned by the French State and enjoys the status of national park. Once disembarked, a few minutes by boat from Hyères, you will first discover a discreet little harbour, a former garrison consisting of a place of arms, a church and a few streets, dominated by the massive silhouette of Fort St. Agatha. To fight against the English presence in the Mediterranean, Napoleon the First had, indeed, fortified these islands. Porquerolles has had a rather turbulent history before becoming, in 1912, the property of a Belgian, François-Joseph Fournier. Son of a poor boatman, originated from Clabecq, he had made a fortune in gold mining in Mexico, after years of a rather extraordinary adventurous life between Canada, Panama and California. Married in 1911 to Sylvia Frances Antonia Johnston Lavis, Porquerolles was be her wedding present! As soon as it was installed, the couple began to develop the island, whose vegetation had been totally burned by fire. They develop wine and fruit growing in a philanthropic farm spread over more than a thousand hectares. This action has profoundly marked the face of the island discovered by Edouard Carmignac in 1989, on the occasion of the wedding of the french architect Françoise Vidal with the french actor Jean Rochefort: “By attending the wedding of Françoise Vidal, the daughter of my friend Henri Vidal, with the actor Jean Rochefort, I discovered this paradisiac site. So, when at the death of their father, Aline and Françoise Vidal offered me to buy this 16 hectares property, I saw a chance.” This Provencal farmhouse, melted into the landscape, we reached by foot, through the paths of the scrubland coming from the port. The villa can be seen neither from the sea nor from the surroundings, which is here the ‘tour de force’ that succeeded its successive architects. 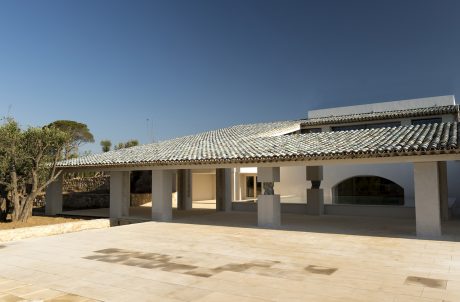 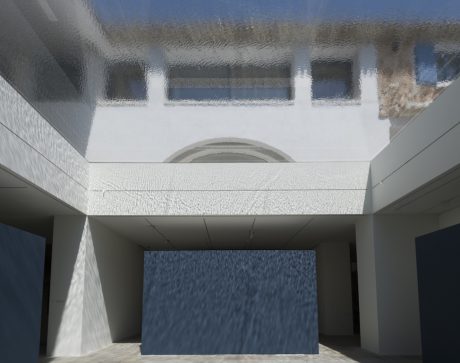 First owner, in 1963, the architect and engineer Henri Vidal (1924-2007) raised the farmhouse, by applying his ‘land army’ concrete, but respecting the landscaped line of the island whose summit rises to 142 meters. As it became the property of Edouard Carmignac, the place was not easy to transform into an exhibition space: “Impossible to add a square centimeter of built-up area, explains Charles Carmignac. Everything had to be underground. These are 2000 square meters of an invisible museum from the outside. Now, how to bring natural light into this basement? This was the major challenge: on an initial project by the architect Marc Barani of Nice, the cross plan of the rooms is under a skylight – a huge glass slab of 80 square meters and 20 centimeters thick that come to underline 20 centimeters of crystal clear water. “The ground has been dugged by 7 meters, explains the architect Mouktar Ferroudj from the Paris agency GMAA which took over the torch. The transport from Rome of the synthetic glass plate, which weighs 19 tons, was a real saga”. The illuminating effect of this aquatic ceiling is certainly striking, both outside and inside, after a rather ridiculous ritual of loosening (the foundation is to be visited barefoot) and absorption of a drink of herbal decoctions, both meant to put the visitor in optimal conditions for a right apprehension of the works… 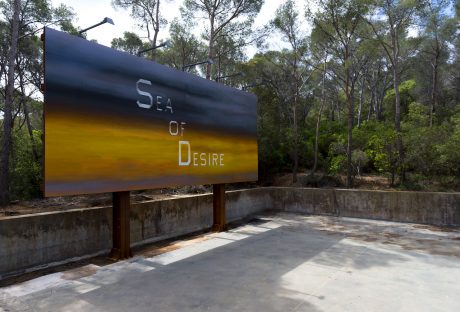 An impressive set, though somewhat mainstream, which features under the curation of the Austrian Dieter Buchhart, the signatures of Miguel Barceló, Jean-Michel Basquiat, Marc Bradford, Jacob Hashimoto, Roy Liechtenstein, Bruce Nauman, Shirin Neshat, Afshin Pirashemi, Miguel Rothschild (a true discovery!), Ed Ruscha, Newsha Tavakolian or Andy Warhol. Outside, a garden of 15 hectares, imagined by the landscape star artist Louis Benech, is also inhabited by a series of, discreet and inspired by the place, works, including Jeppe Hein, Nils-Udo, Jaume Plensa or Ugo Rondinone. 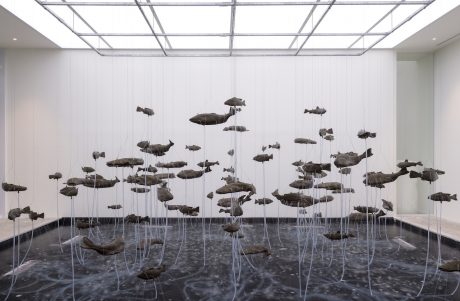 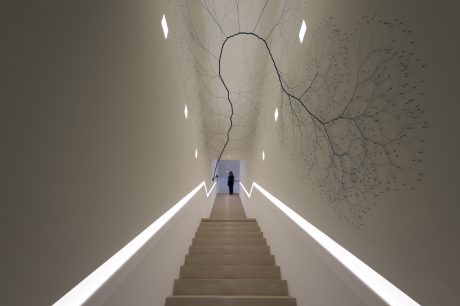 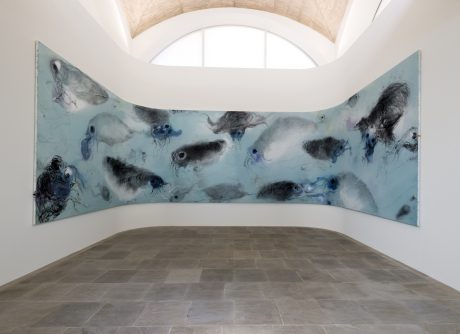 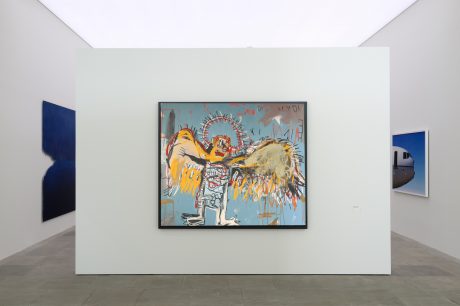 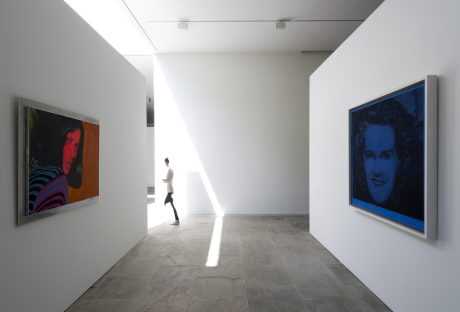 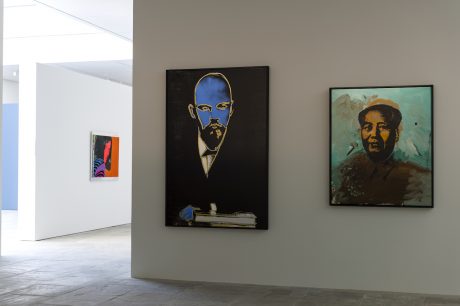 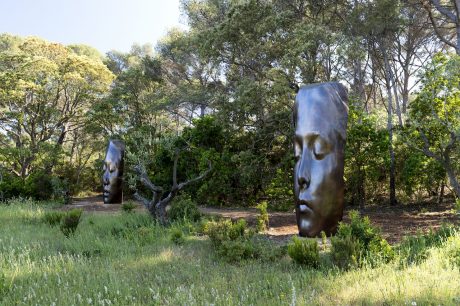 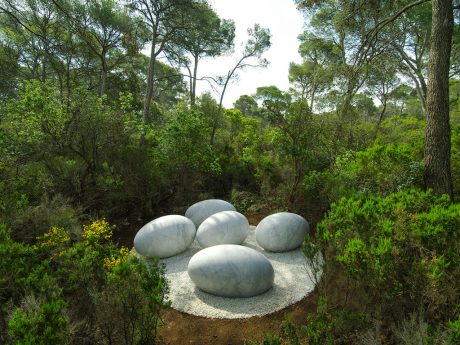 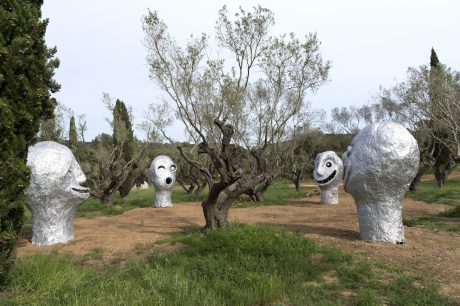 Sky is the limit…

The Carmignac Foundation, is a corporate foundation that revolves around two axes, the Collection and the Photojournalism Prize, annually awarded. Edouard Carmignac is president and founder of the company Carmignac, specializing in asset management and investment funds, the largest of which would be endowed, it is said, with no less than 25 billion euros! Therefore, no budget limit seems to prevail in the management of his field in Porquerolles… More introverted, more poetic, his son Charles, a musician by training, a member for two decades of the rock band Moriarty, has temporarily tended to paternal aesthetic aspirations, even if he favors more reflective and critical cutting-edged works of our time. Both of them have just ordered his biggest work to American artist Ed Ruscha (more than 12 meters long), already on view at the edge of the forest, and have agreed on a big golden curtain by Ghanean artist Brahim El Anatsui… With such artistic ambitions, there is no doubt that their joint project is successfully perpetuated, its island positioning constituting an undeniable asset in the nowadays contemporary art world.