A big, important barge of a thing relatively few will buy, and a technical achievement few have the resources or engineering might to match or surpass. It’s the new Audi A8 – the cleverest Audi of all.
As stunning and understated as this A8 looks, there’s no question that the fourth-generation of this big Audi saloon has always been something of an alternative choice for those elite levels of the executive saloon market. 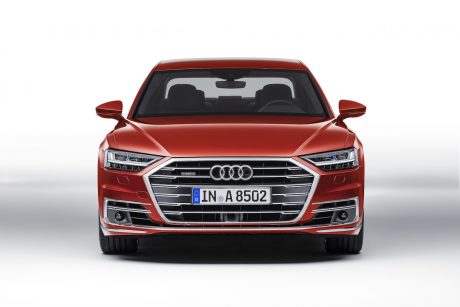 Beyond its design aesthetics, though, Audi is claiming that this new A8 is a “game-changer” being more refined and, crucially, more technically- advanced than ever before.

Audi claims the A8 ushers in a new era of design for the entire brand, although you could quite easily contest that. The aesthetic follows on from the latest A4 and A5 models, with an understated silhouette that uses sharp creases and innovative lighting (the A8 gets optional laser headlights and OLED rear lights that offer remarkable fluidity) to inject some vitality. 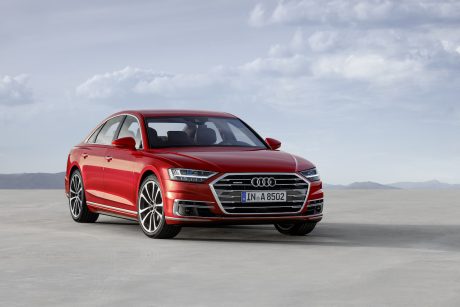 Most notably, the A8 has been developed to boast higher levels of automated driving.
All of which is very impressive but as with all “arms” races, especially automotive ones, much of this is splitting hairs and all of the cars in the sector end up boasting much of the same technology anyway.

Step inside and your first impression is of a car built to outlast civilisation itself!
Inside there is a Valcona leather upholstery, wood and aluminium dash inlays, ambient LED lighting, dual-zone climate control, electrically adjustable and heated front seats and Audi’s MMI infotainment system complete with a 10.1in top display, a 8.6in lower display, Audi’s 12.3in Virtual Cockpit, wireless charging, a DVD player, sat nav, DAB radio, and USB and Bluetooth connectivity. 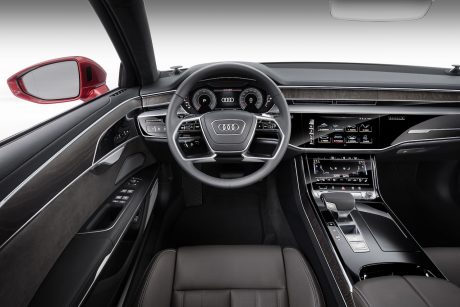 The many backlit buttons and dials of the third-generation A8 have almost entirely disappeared, making way for glass-fronted replacements whose haptic and acoustic feedback has been judged surprisingly well, and the wraparound dash really does lend the cabin the lounge ambience Audi’s designers speak of. It’s an environment that leaves you strangely cool – but that’s as it should be, isn’t it?

Rear-seat passengers get a phone-sized screen in the armrest – standard on LWB and optional on SWB – that does rear-seat climate, opens/closes the blinds and controls the screens mounted on the backs of the front seats. And comfortable as the front (driving position is on point) is, it’s from the back seats that the A8 makes most sense. It’s a limo, after all, so you may as well go the whole nine yards and spec’ the ‘Relaxation Seat’. Among other things it gives a foot rest that massages and heats the soles of your feet. Yes, really. 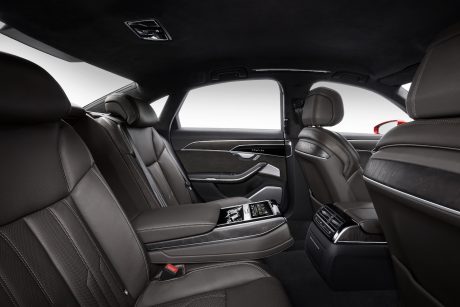 Material quality is predictably superb, but we suspect the way the A8’s interior has been designed and laid out means it will appeal to a very different set of people than an S-Class.

The standard stereo consists of a six-channel amplifier with 180W and 10 speakers, including a subwoofer.
Visibility is generally good in cars such as these, but the A8 is the best of the bunch. The broad windows and expansive rear screen provide a good view all round, while front and rear parking sensors, along with a rear-view camera, are standard on all models. 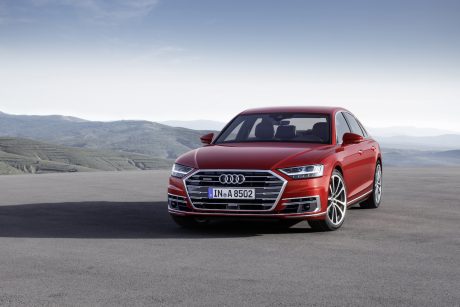 Currently, the A8 offers a choice of two turbocharged V6 engines: a 3.0-litre petrol developing 335bhp (badged 55 TFSI) and a 3.0-litre diesel with 282bhp (badged 50 TDI)
Both petrol and diesel V6s are the same engines offered in the last A8, albeit heavily revised.
Of course, power is nothing without control, and the A8 is a long and relatively heavy car. However, Audi’s quattro four-wheel drive system comes as standard on all models and provides supreme all-weather traction 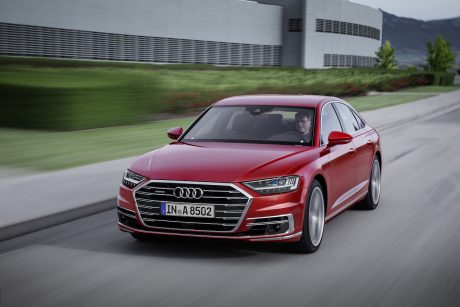 As soon as you get back on the accelerator the engine refires and you’re away again.
All A8s get adaptively damped air suspension as standard with selectable ‘Comfort’ and ‘Dynamic’ modes, but you can specify something cleverer – a system that, with the help of a camera, can ‘see’ potholes, speedbumps and so-on. Because the car knows the obstacle’s there, it can prepare itself accordingly. Rather than anti-roll bars A8s thusly equipped get an electric actuator at each corner. These actuators ‘pick-up’ individual wheels (or even lift the whole car) – stressing or relieving corners as necessary to dampen body movements. Audi let us test the system on a super-smooth closed course with mock speedbumps and manhole covers, and the effect is quite uncanny. Aiming for a speedbump then passing over it as though it were never there is as odd as it is excellent. 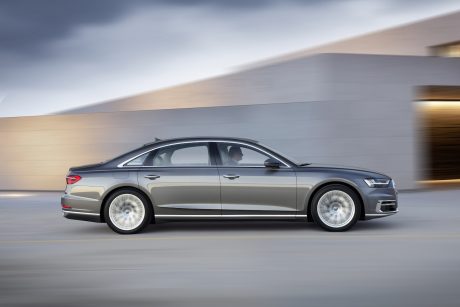 This is unlikely to concern most buyers, who will care more about the car’s ability to isolate its occupants from the outside world and glide across the ground as if by magic.
However, getting to the bottom of this car’s technological capabilities – on which so much of its appeal ultimately rests – will require the time and familiarisation that only a test on home soil can offer.

Overall, this new Audi A8 is a very capable luxury car and anyone lucky enough to drive one would be very happy indeed. The A8 is smooth, really well-damped.