The E-Pace was already well into its development when the F-Pace was launched, but the massive success of that car has vindicated the decision to introduce a smaller offering. 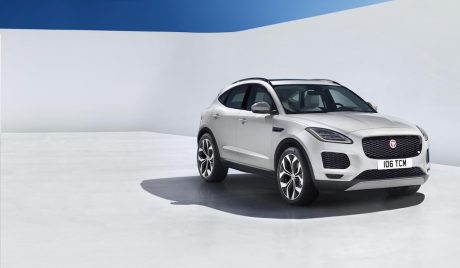 Jaguar may have been a day late to the SUV market, but it’s certainly not a dollar short. Like a Hollywood star showing up fashionably late to an afterparty, it swooped in with the sharp, svelte F-Pace in 2016 and duly stole the limelight. In fact, the F-Pace became the fastest-selling model in the British brand’s history. Just incredible!

Don’t be confused by the name: ‘E’-Pace does not mean electric. Jaguar does not offer a plug-in hybrid or battery version of this car! Here, it’s internal combustion only.

Like any successful newcomer, Jaguar is keen to capitalise. Soon it will launch the fully electric I-Pace SUV and later there will be the bigger J-Pace. But it’s the E-Pace, the company’s smallest SUV, that’s expected to be the biggest seller. 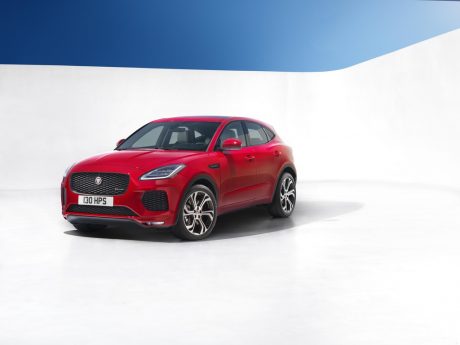 Described as the ‘cub’ of the range, it competes with the likes of the Audi Q3, BMW X1 and Volvo XC40. However, the E-Pace is designed to look more purposeful than those models, with design cues borrowed from the F-Type sports car. 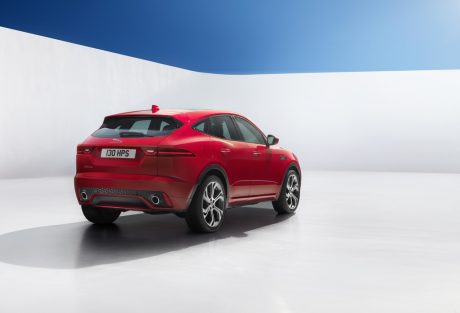 Like its stablemates the E-Pace sits on an aluminium and steel structure clothed in aluminium body panels, although it goes a little heavier on the sporty details, include headlights that could be pinched straight from the F-Type. 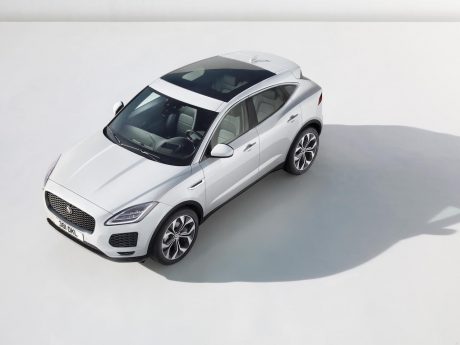 Although its significantly shorter than its big brother, the E-Pace sits on a wheelbase almost identical in length. Pushing the wheels out to the corners helps cabin space – five humans plus their luggage is possible.

There’s more F-type touches inside too, with a grab handle sprouting from the transmission tunnel and cabin trim designed to echo the F. You can also specify treats for gadget freaks like a gesture-controlled tailgate and the activity key.
There are also great fillets of polished, ice-cool metal encircling the outermost vents, the scalloped door inserts, and the pistol-grip gear selector that’s been chosen instead of the rotating knob.

Jaguar has often lagged behind when it comes to technology, and the E-Pace’s new Smart Settings tech will help that issue. Simply put, Smart Settings is designed to make your life easier. It learns driver preferences such as seat settings and climate for different drivers, and it’ll also do things such as heat the steering wheel automatically on particularly cold days. 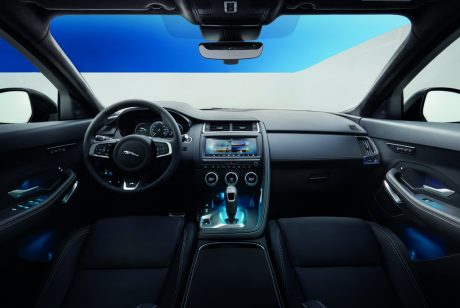 There’s also a new warning that’ll remind you if you’ve left your smartphone in the car. It’s not much, but it is very useful. 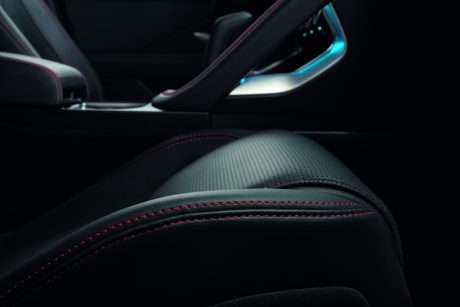 All versions of the E-Pace come with a 10.0in touchscreen infotainment system that Jaguar calls Touch Pro. It’s relatively snappy to respond when you prod it, the graphics are sharp and the interface reasonably easy to get your head around.

You get a DAB radio, Bluetooth and a couple of USB sockets as standard, along with a relatively weedy 125W sound system. Upgrade to S trim and you’ll also get sat-nav, while SE models get a punchier 380W Meridian sound system.

Choosing a trim level for your E-Pace is a two-stage affair. First, you have to choose whether you like the look of the standard car or prefer the sportier styling of the R-Dynamic version. The latter gets you a more aggressive bodykit, satin chrome side vents, a gloss-black grille and twin tailpipes.

After you’ve made that decision, then you have to decide how much equipment you want. All versions come with dual-zone climate control, cruise control, front and rear parking sensors and LED headlights, but we’d recommend spending a bit extra on the S trim, which adds leather seats (electrically adjustable in the front) and a more sophisticated infotainment system. 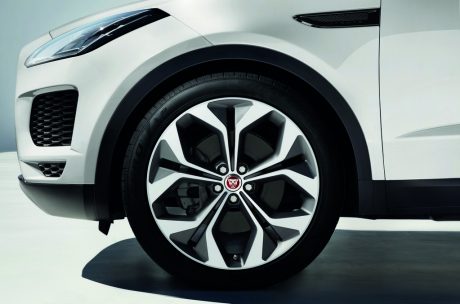 SE and HSE trim packs add bigger wheels, more electric seats adjustment and increasingly more safety kit. Unfortunately, going for one of these means paying a price that could get you into an altogether bigger and better
Next up, you get comfortable. And you will get comfy, because the steering wheel and seat adjust for days, whether you want lord-it-up command seating, or purist lo-riding.

The boot’s not giant, thanks to the stylist’s swoop of a pen that brings the rear window down at a fast angle. It’s 425 litres with the seats in place. 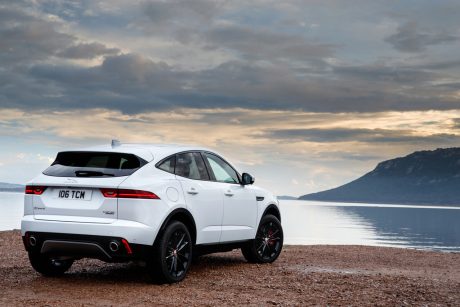 There a new engine too: Jaguar announced a new 196bhp Ingenium engine, and it’s good for 0-100km/h in 7.7 seconds. As you can tell from its Ingenium moniker, and 0-100km/h time, it’s clear the new engine is built for economy; Jag claims it’ll do a respectable 34.4 mpg.
The two petrol options are 2.0-litre turbo petrols with the range-topper offering 296bhp and 0-100km/h 6.1 seconds.`

Around town, the pace is perfectly adequate, and given some encouragement it doesn’t prove frustratingly slow at motorway speeds.

That lofty driving position gives you a good view of the road ahead and seeing out of the side windows at junctions and roundabouts isn’t too hard, either.
The view out of the back of the E-Pace is rather less impressive. However, all versions come with a reversing camera to get around this, along with front and rear sensors. 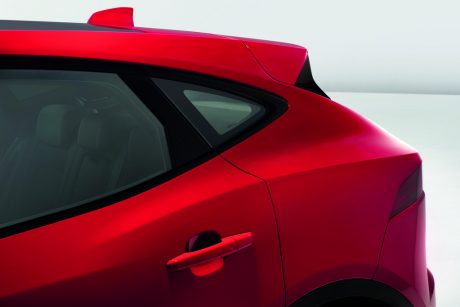 Most versions come with all-wheel drive that predictably offers plenty of grip, although you can opt for the entry-level diesel engine with front-wheel drive.
The E-Pace is, quite simply, one of the safest cars in the class. All models come with automatic emergency braking, lane keep assist and a system that monitors how tired the driver is. Upgrade to S trim and you’ll also get traffic sign recognition, while SE versions and above add high-speed emergency braking and blindspot monitoring to that list.

Unsurprisingly, Euro NCAP dished out the full five-star safety rating for the E-Pace, although it’s hard to compare the breakdown of individual scores with those of rivals such as the X1 and Volkswagen Tiguan. That’s because the E-Pace was tested under a newer, more stringent set of criteria.

It’s without doubt one of the most handsome, best-handling car in its class!