The scent of Flower Power is in the air at the ING Art Center, which is hosting an exhibition that covers the ideals, aspirations, dreams and thirst for freedom as well as the activism and anti-establishment protests of the late 1960s. These cultural, social, artistic and technological revolutions, which all took place between 1966 and 1970, have shaped our current lifestyles and still have an impact on how we look to the future today. A real “must see”, and a funny experience!
Originally conceived by the Victoria & Albert Museum, this exhibition kicked off in London before going on display at the Museum of Fine Arts, Montreal and Fabbrica del Vapore, Milan. For its Belgian incarnation, ING Art Center has adapted the content by delving into topics relating specifically to Belgian history. Consequently, Louvain’s student protests, Jazz Bilzen and the Amougies Festival (1969) in Hainaut, regarded as the first European Woodstock, is also featured in the exhibition (incidentally, the Frank Zappa’s picture that appears on the exhibition poster was taken there). 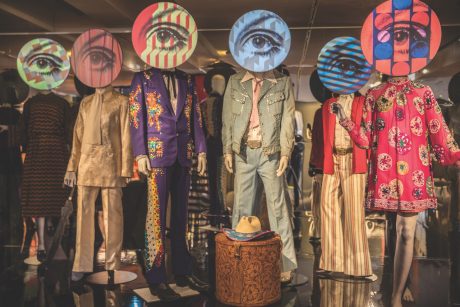 The tour explores several themes: the Swinging Sixties, the counterculture, consumer habits, protests and rebellion, festivals as well as the emergence of communities, information technology and environmental movements. Visitors are, therefore, invited to travel through the Swinging Sixties, which fashion and music influence one another, and boutiques on Carnaby Street become the epicentre of the new “youthquake” culture. The counterculture, characterised by staunch opposition to conservatism and authoritarianism, proposed alternative lifestyles and gave rise to anti-establishment protests. Meanwhile, the psychedelic movement, which means “mind manifesting”, invaded society, when the new accessibility of credit revolutionised consumer habits. At the same time, the advertising industry grew in leaps and bounds. Mass design and technological progress were revealed to the world. The broadcasting on television of landmark events, such as the first man on the Moon, brought international news into the home. 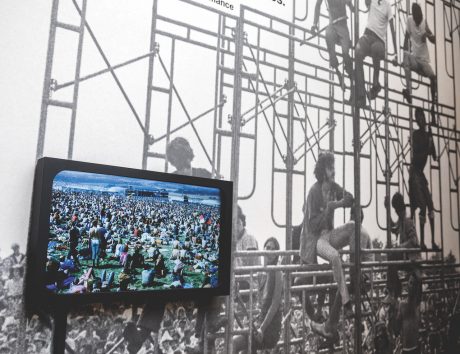 Across borders, protests and rebellion spread, political activists fought for civil rights and young people stood together in solidarity. In many countries, critics of US imperialism protested against the Vietnam War. Che Guevara became iconic among a youth eager for non-aligned countries to assert themselves. Political activists and anti-establishment protesters were out in the streets. In the United States, the Black Panthers, “gay liberation” and the women’s movement were part of the same struggle for minorities to achieve equal civil rights. The show presents, for instance, a cover of the pioneer gay paper The Advocate, first article to have been published after the dramatic Stonewall Riots in New York, on June 28, 1969. These revolts, as we know today, partly changed the lives of LGBT people in the West… Though, there is still a lot to be done. Alongside these protests, student uprisings soared in number. In Belgium, the Leuven Vlaams movement caused the break-up of KULeuven and the creation of the Catholic University of Louvain-la-Neuve. In Paris, student occupations and protests against capitalism and the consumer society culminated in the general strike of May 1968. 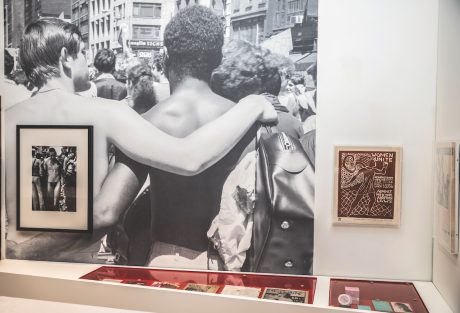 In the late 1960s, music festivals became the blueprint for a revolutionary way of coming together that enabled their participants to exemplify their vision of a communitarian and permissive society. The Newport Folk Festival, the Isle of Wight Festival, and Woodstock of course, here brought up as a fully immersive audio-visual experience, were all examples of this. The West Coast of America became the birthplace of alternative communities that cared about the environment and had a utopian vision of progress that would go on to form the basis for the development of information technology. 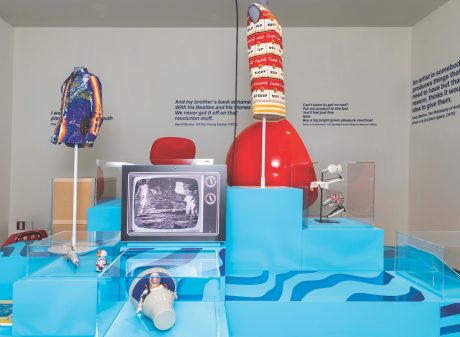 This unique social and cultural context is presented in Brussels with the aid of some 350 symbolic objects from the spheres of fashion, music, design, graphic design and photography. What’s more, during the tour, Sennheiser headphones (the specialist in AMBEO technology providing a 3D sound experience) surround visitors with standards from artists including The Beach Boys, The Beatles, The Rolling Stones, The Who or Janis Joplin. Through these snatches of music and videos, which put the exhibits in their proper context, visitors enjoy a truly immersive experience.