The Karoq is a completely new car, which parks in the spot vacated by the weird and wonderful Yeti. So it’s the smaller sibling of the Skoda Kodiaq . 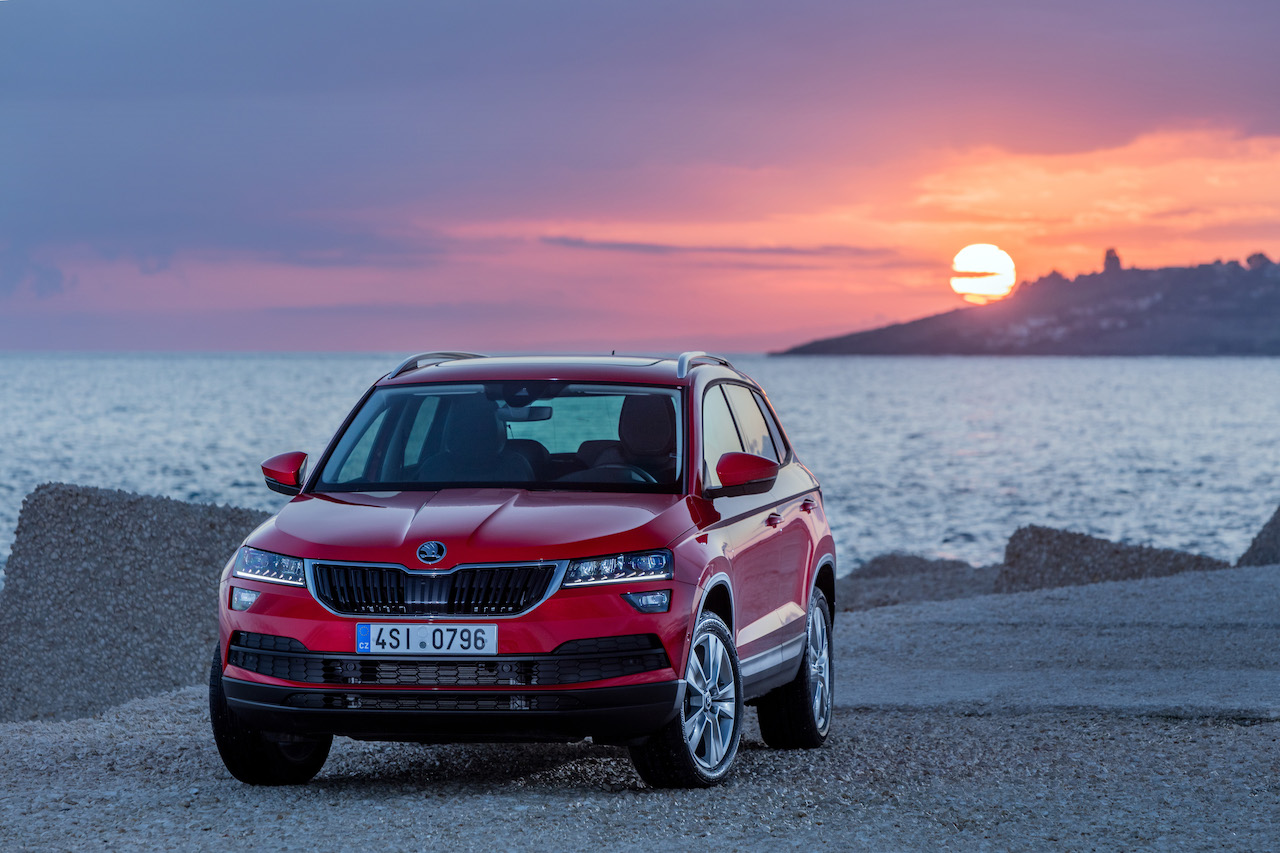 Its smaller size also makes the Karoq a bit cheaper and sportier than the Kodiaq, even if it’s not quite as full of character as the Skoda Yeti it effectively replaces.
The Karoq resembles a scaled-down Kodiaq in many ways and shares much of the sharp-edged styling of its bigger brother. It comes as no surprise, either, that it shares its outline and proportions with the SEAT Ateca – the two cars are closely related under the surface and the Spanish car is actually one of the Karoq’s closest rivals. 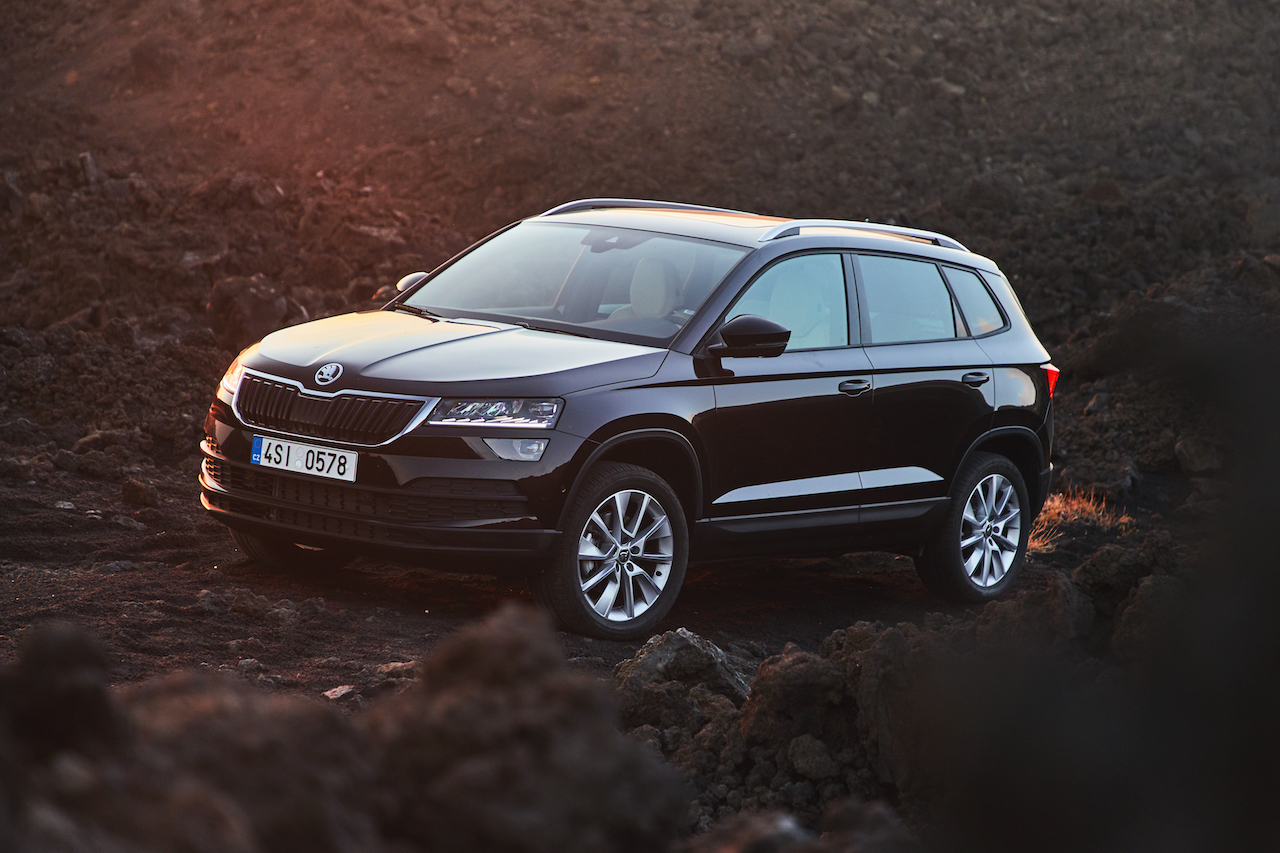 The Skoda Yeti was a hard act to follow. Its individual character, incredible practicality and affordability attracted customers in droves. Its replacement, the Skoda Karoq, feels more grown-up, and whatever it lacks in character, it makes up for with a breadth of ability that sends it straight to the top end of the crossover class.

Skoda scored an instant hit with the Yeti, so when it came to replace the crossover, it was a surprise to many that the name was dropped and replaced with Karoq. The reason for the change was to bring the mid-sized crossover into line with the larger Kodiaq, while the Karoq name has the same Inuit Eskimo roots as the Kodiaq’s. 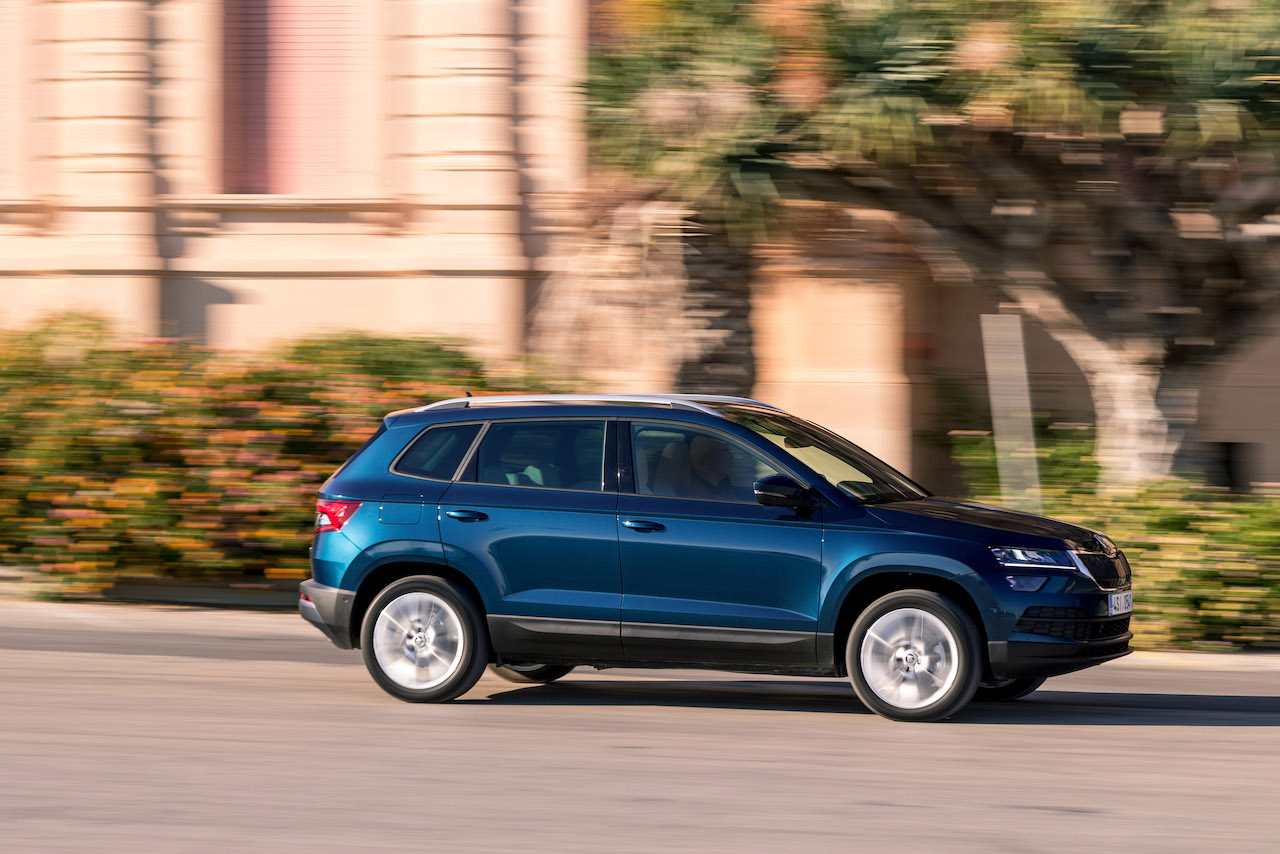 The Karoq’s design is also heavily influenced by the Kodiaq. The shape of the lights front and rear are similar to the larger car, and Skoda’s familiar grille shape is present and correct. However, remove these details, and the Karoq looks largely similar to the SEAT Ateca,
although that should come as no surprise, as both cars are identical underneath. 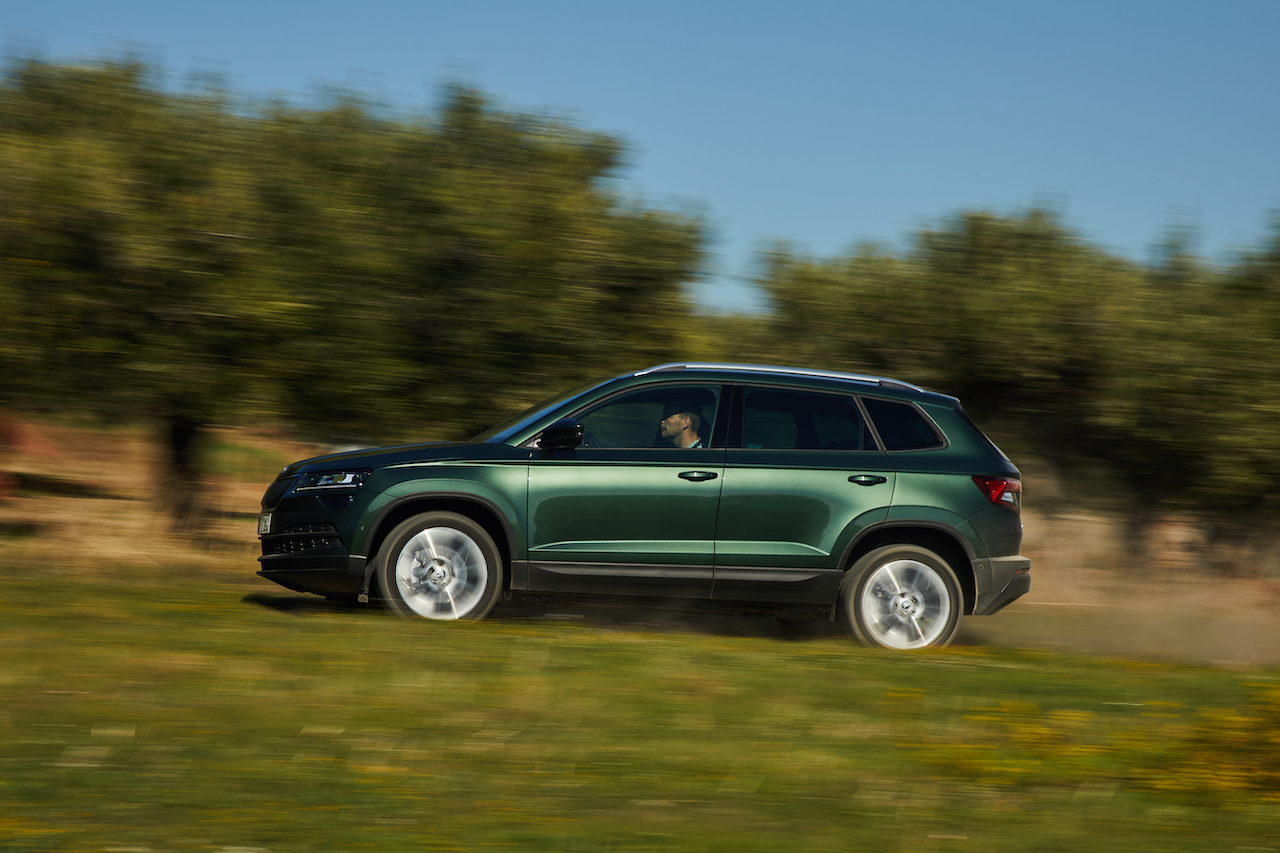 There’s plenty to like inside. The Karoq cabin design is identical to that of the bigger Kodiaq, which means it’s conservative with no flashy or fashionable design highlights. But it’s also incredibly functional, with great ergonomics, plenty of space and a sense of quality. It feels well built, while it’s also stacked with tech features.

The level of connection is improved with the 9.2-inch optional Columbus system. While this adds gesture control, the standard Amundsen system gets the same WiFi hotspot, voice control and a one-year subscription to Skoda’s online services.
A bright screen, sharp graphics and simple menu layout mean it’s easy to use. The glossy screen picks up fingerprints, but with CarPlay and Android Auto, plus other services with a valid data connection, it’s advanced and more responsive than lot of cars. 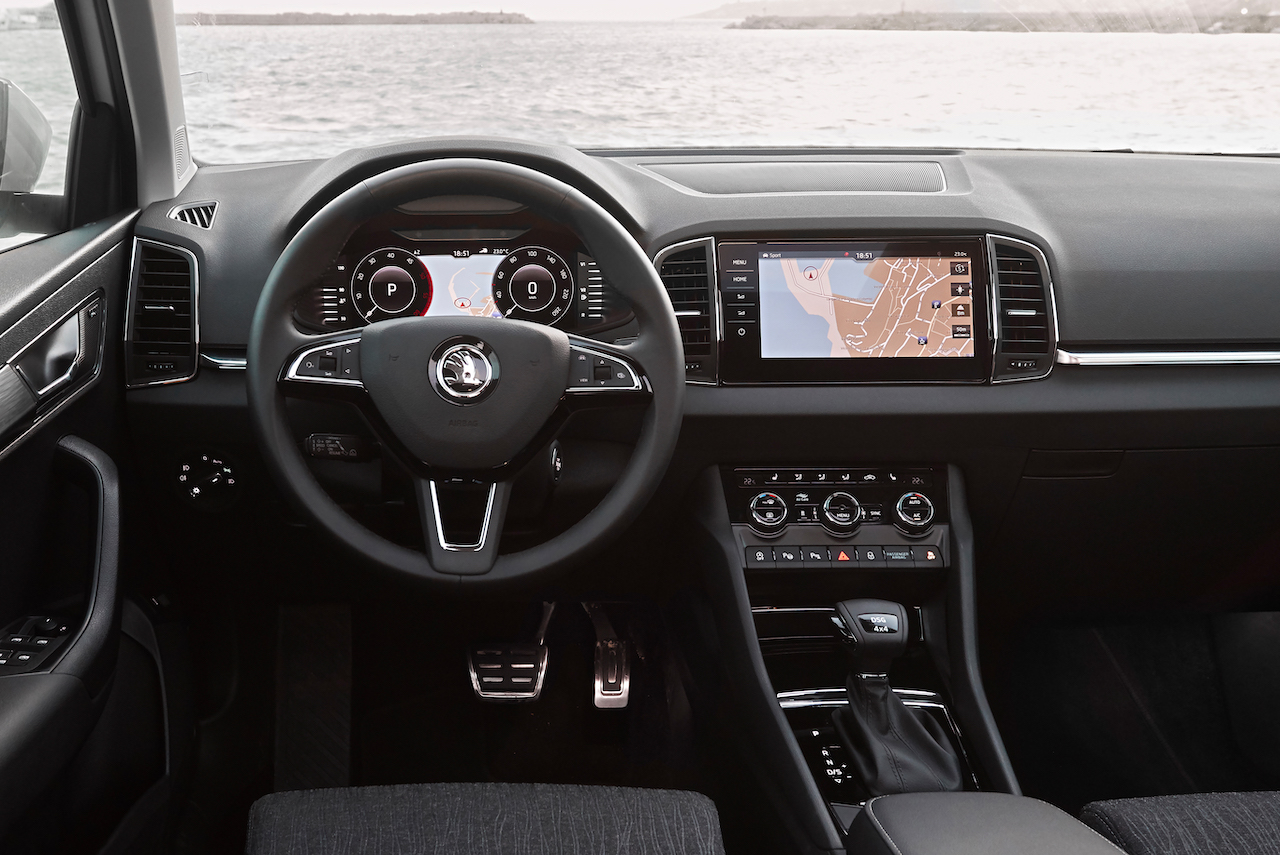 It’s a very grown-up cabin, and even the entry-level version feels more expensive than it really is. You probably couldn’t expect much more from a car for this money.

It’s not as boxy as the Yeti, but it’s still usefully square and the boot is actually more spacious. The door bins each hold a 1.5-litre bottle of water, and the options list includes some mini rubbish bins with flip-tops and little liners in which to dispose of your more organic waste… things like chewing gum or banana skins

The central armrest contains a ‘jumbo’ storage box (Skoda’s words, but we’d have to agree) and under the passenger seat there’s an umbrella in a holster. Someone’s really thought about this stuff, and they deserve a light round of applause. 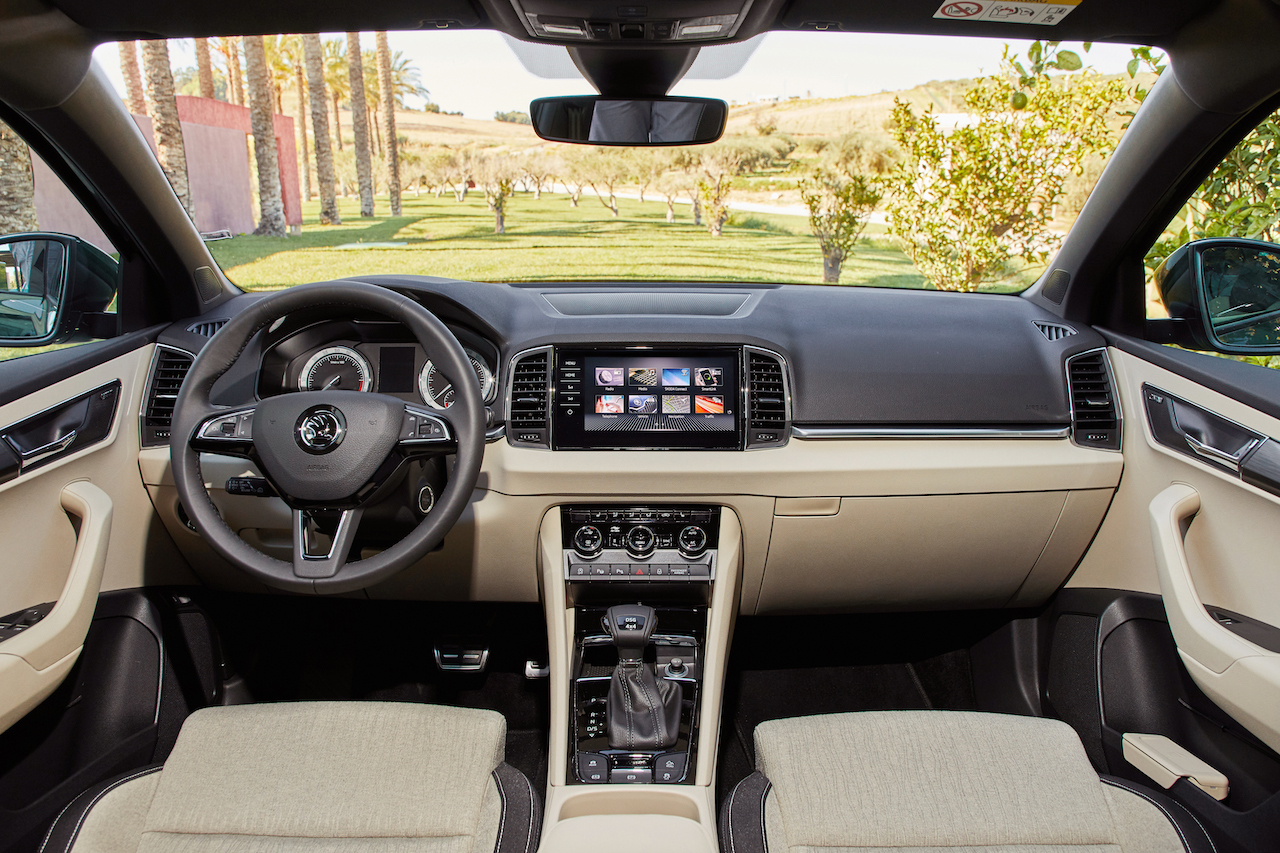 The large interior with its voluminous boot is well suited. Things like a space-saver spare, rough road package with engine and chassis guards, a reversing camera and adaptive cruise control are all either standard or available optionally to improve how easy the Karoq is to live with.
There’s good leg and headroom in any of the seats in the Skoda Karoq – in fact the rear-seat passengers do slightly better for headroom than those in back of the larger Kodiaq. Taller rear seat passengers may find their knees brushing on the seat backs though.

Depending on spec the Karoq’s tailgate raises electrically, and there’s a ‘virtual pedal’ that allows you to open it with the waggle of a foot under the rear bumper if your hands are full. Once it’s open you’re greeted by an impressive load area, that’s practically shaped and roomy. In standard form it will swallow 521 litres with the rear seats in place, or a huge 1,810 litres when they’re folded. Opt for the VarioFlex rear seats and you can adjust the ‘seats up’ figure from between 479 to 588 litres – although more luggage space means less legroom. 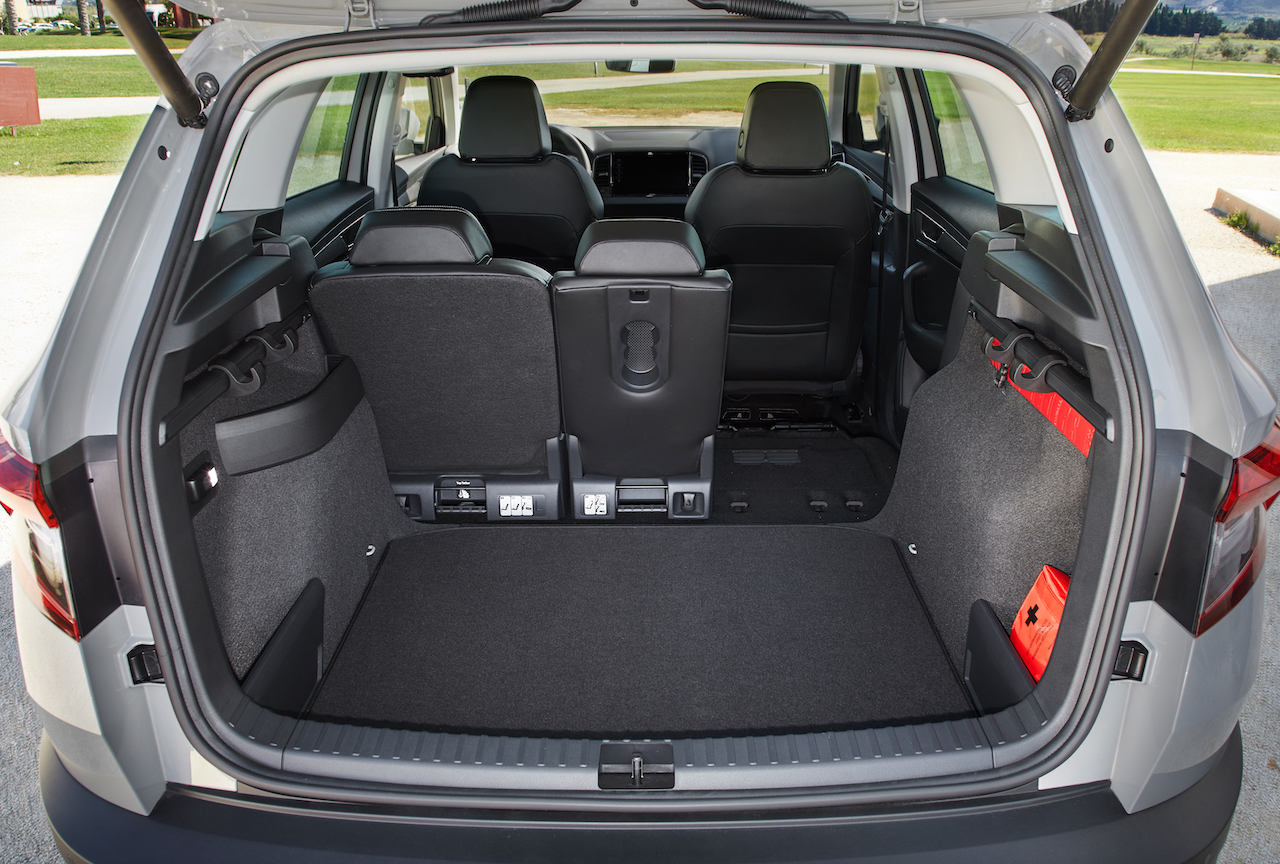 While that roster should be enough to satisfy most, you can push the boat out and choose the Edition range-topper with 19-inch alloy wheels, a panoramic sunroof, leather upholstery, a 9.2-inch Columbus infotainment system and extra active safety features. This pushes the Karoq into Kodiaq territory, though, so the SE Technology and SE L trims represent better value. In late 2018 Skoda added the Karoq Scout and Karoq Sportline to the range, each with individual styling, wheels and interior themes designed to give customers a more rugged (Scout) or sportier (Sportline) car than the standard Karoq. 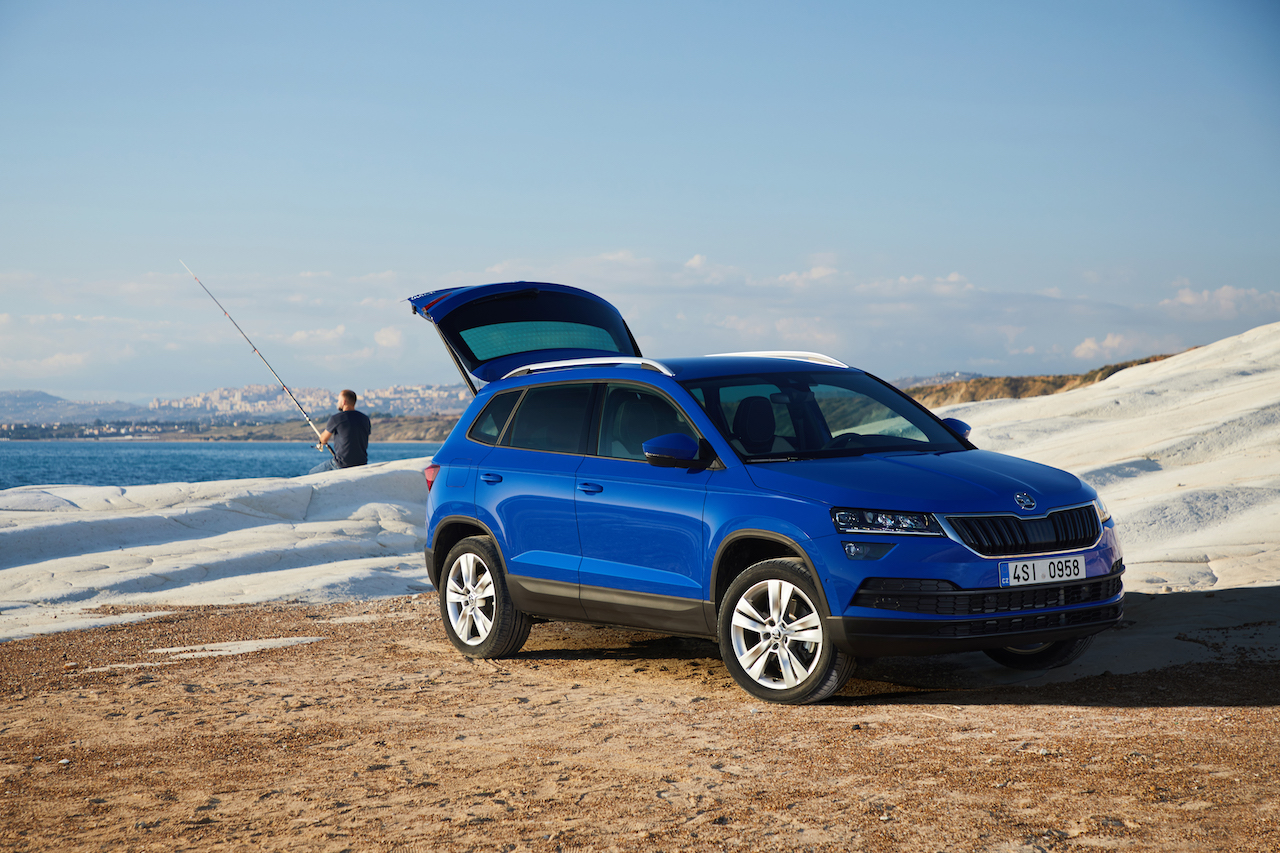 Six Engine choice in the Karoq range consists of 1.0 and 1.5 TSI turbocharged petrols and 1.6 and 2.0 TDI diesels. The 1.0 TSI 115PS is a three-cylinder unit that is surprisingly capable of pulling this crossover around, courtesy of the Karoq’s relatively lightweight build. The 1.5 TSI 150PS is the VW Group’s latest four-cylinder petrol motor, so combines good power with decent efficiency helped in part by cylinder deactivation on light throttle loads. 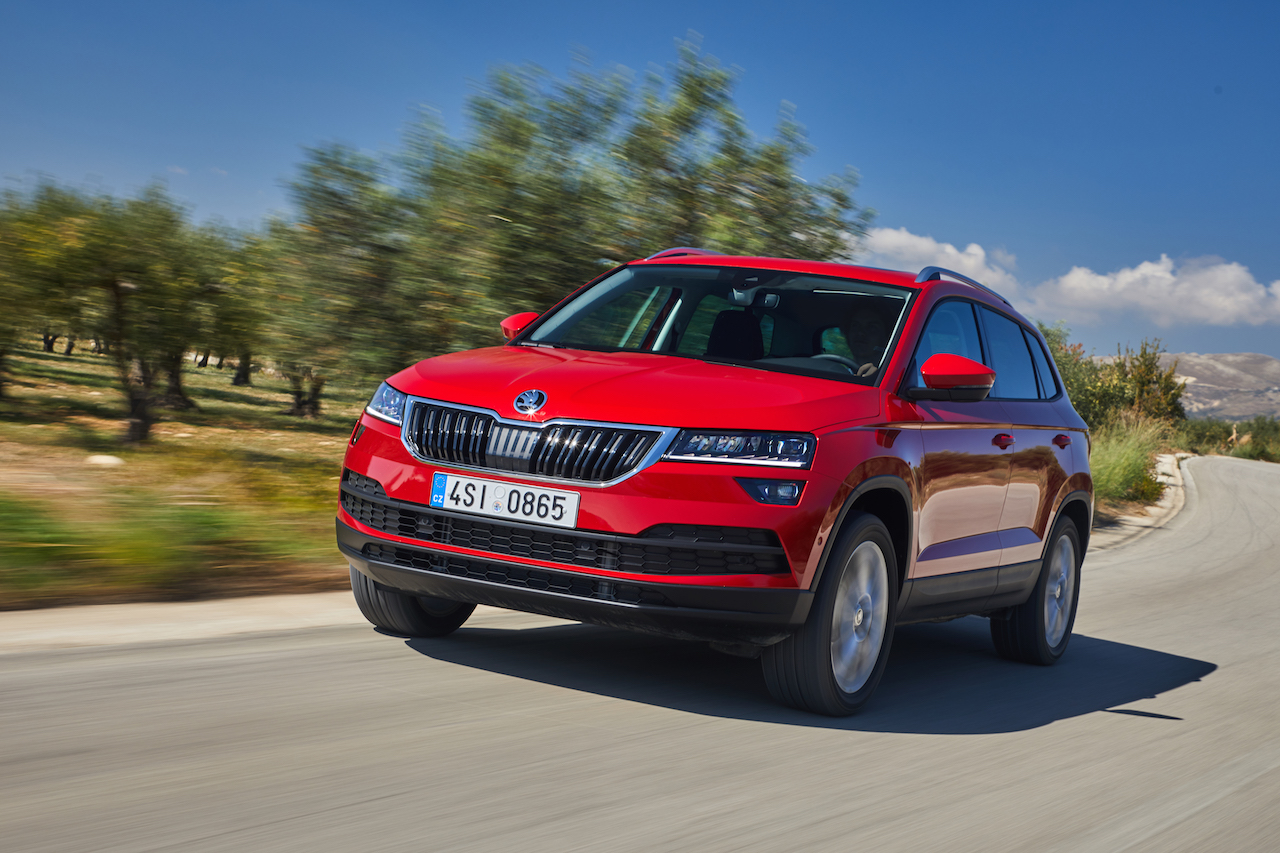 The diesels are a 1.6 TDI 115PS and 2.0 TDI 150PS. All cars come with a six-speed manual gearbox as standard, while a seven-speed twin-clutch DSG auto is offered as an option with every engine.
Engine choice shouldn’t be an issue, whether you want a petrol or diesel.
Of the two petrol engines, the larger 1.5 TSI comes out as our clear favourite. The larger 1.5 TSI has a broader power band, and with 148bhp it’s a stronger performer and more refined – 0 to 100km/h arrives in 8.1 seconds, and you don’t have to work the engine quite so hard. 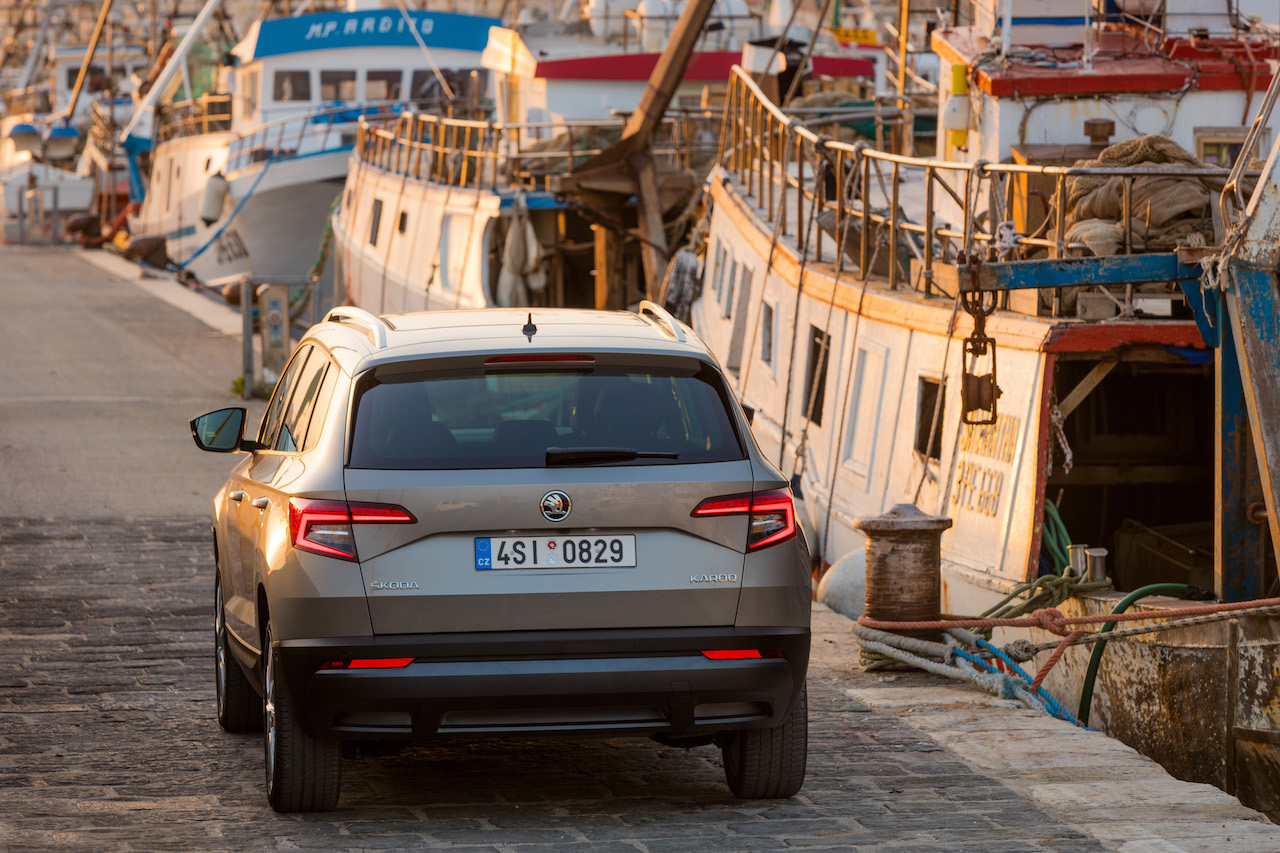 A raised driving position combined with thin windscreen pillars and big side windows means visibility out the front or side is at least as good as its best rivals.
As a back-up, all models have rear parking sensors and SE L models gain front sensors plus a rear-view camera as well.
I’ll also enjoy good seat support and a relatively high driving position. 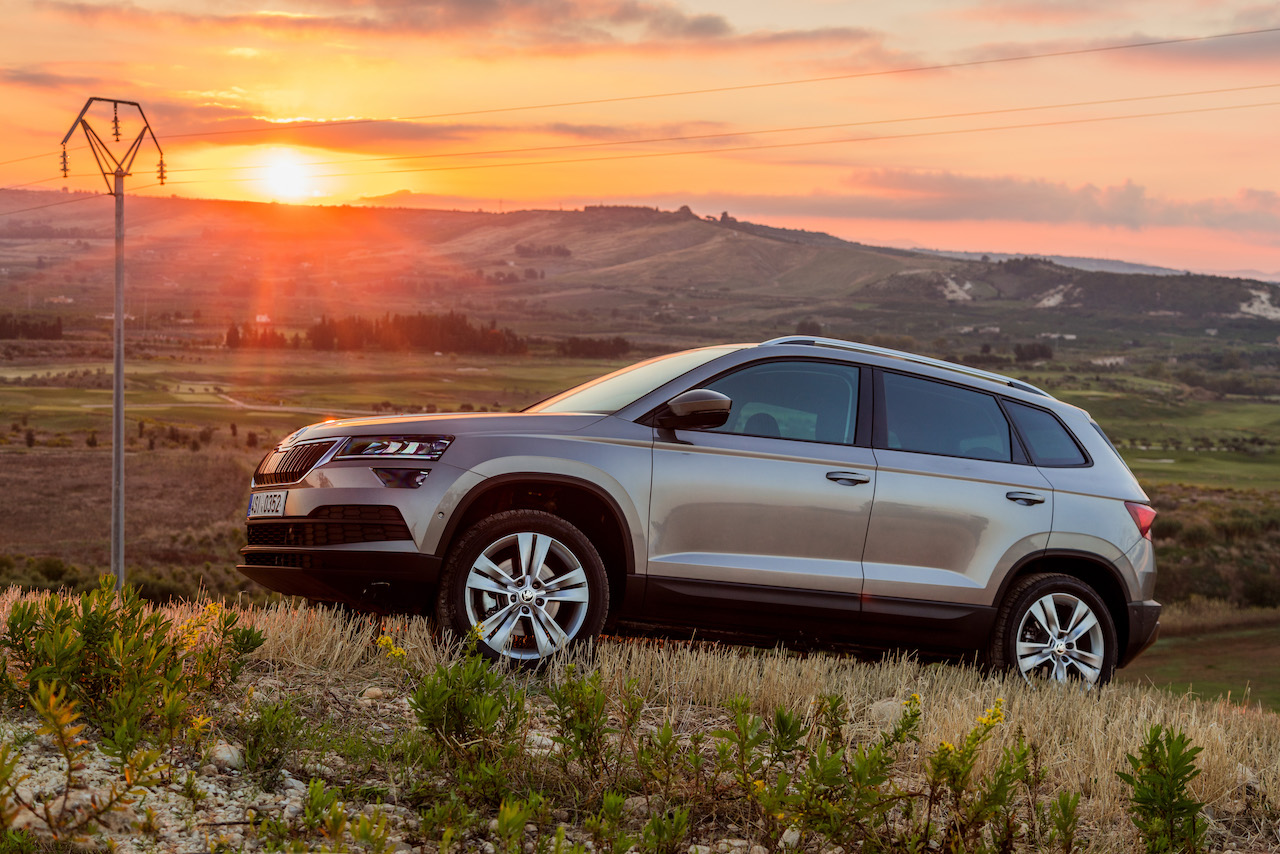 Skoda Karoq strikes a pleasing balance between comfort and driving fun and more responsive – and it’s more agile, with less roll when changing direction. This stems from the Karoq’s firmer suspension. The faster you go, the more the Karoq’s body control comes to the fore, though, giving plenty of security and confidence

The Karoq might have lost its predecessor’s personality, but on every other front it’s a better
Not only that – it does enough to stand out among some strong rivals in one of the fightiest corners of the car market. In the right spec and with the right engine, this is an eight-out-of-ten car. Big boot, roomy cabin and clever touches make the Karoq a great family choice. So long as you forgive it for being the Yeti’s killer!