Since 2003, the Volkswagen Touareg has offered buyers of luxury SUVs a less blingy alternative to premium-badged rivals. Still, look past the in-your-face chrome grille and there’s a very sensible vehicle underneath. It’s bigger yet lighter than its predecessor, it’s packed to the panoramic sunroof with tech and it can tow up to 3500kg. 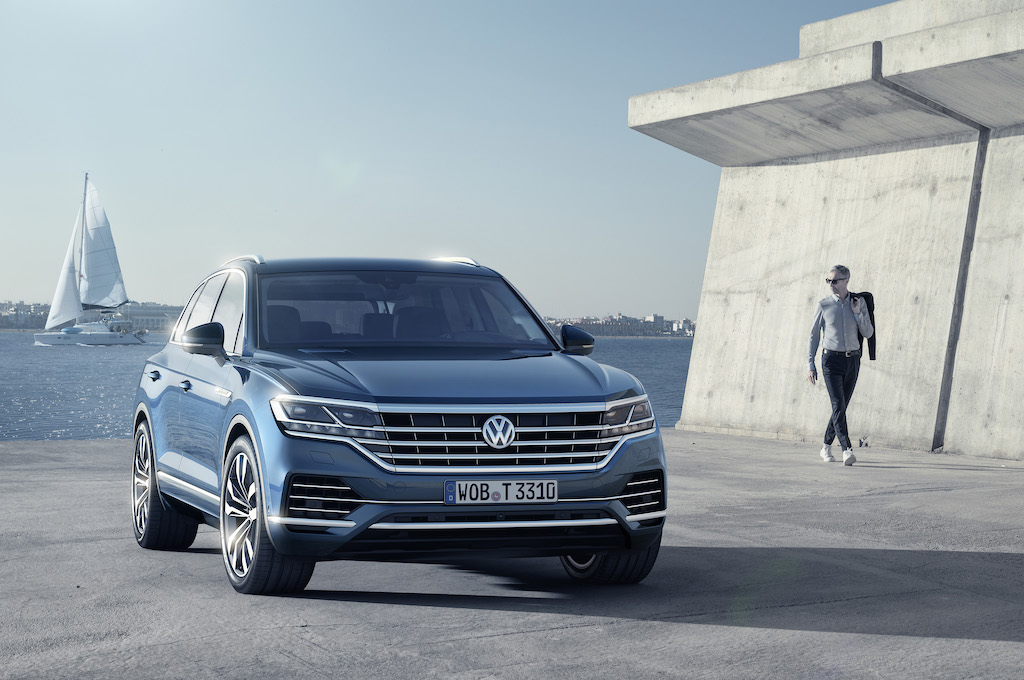 The new Touareg, the VW’s new flagship is without doubt the most intelligent and technologically advanced production car to come out of Wolfsburg, no less. Now in its third-generation, Volkswagen’s big SUV has sacrificed its off-roadyness to become more of a premium, hi-tech SUV for the road. 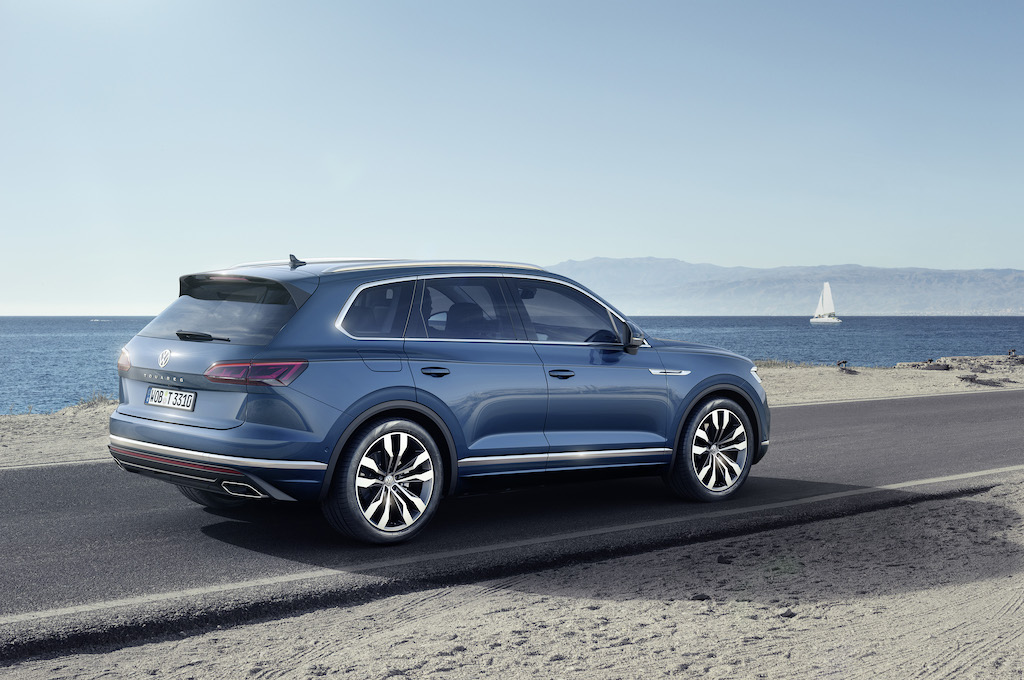 The Touareg’s somewhat dumpy looks have been sharpened up with more powerful and svelte lines that add an air of sophistication and modernity. Thanks to the new platform-sharing, the car has actually increased in size but dropped 106kg. Compared to the last car, it’s 44mm wider and 77mm longer but lower than its second-generation brother; helping its proportions and making it a bit easier on the eye. Another win is that there’s even more boot space, up 113 litres to 810 in total with the rear seats in place. So you can lob pretty much all you can think this side of a medium-sized elephant back there and it’ll probably fit.

The Volkswagen Touareg has evolved into an upmarket SUV that has the ability to battle premium rivals for quality and comfort. The cabin is beautifully built and laden with kit, and while there’s no seven-seat version, it’s more than practical enough. 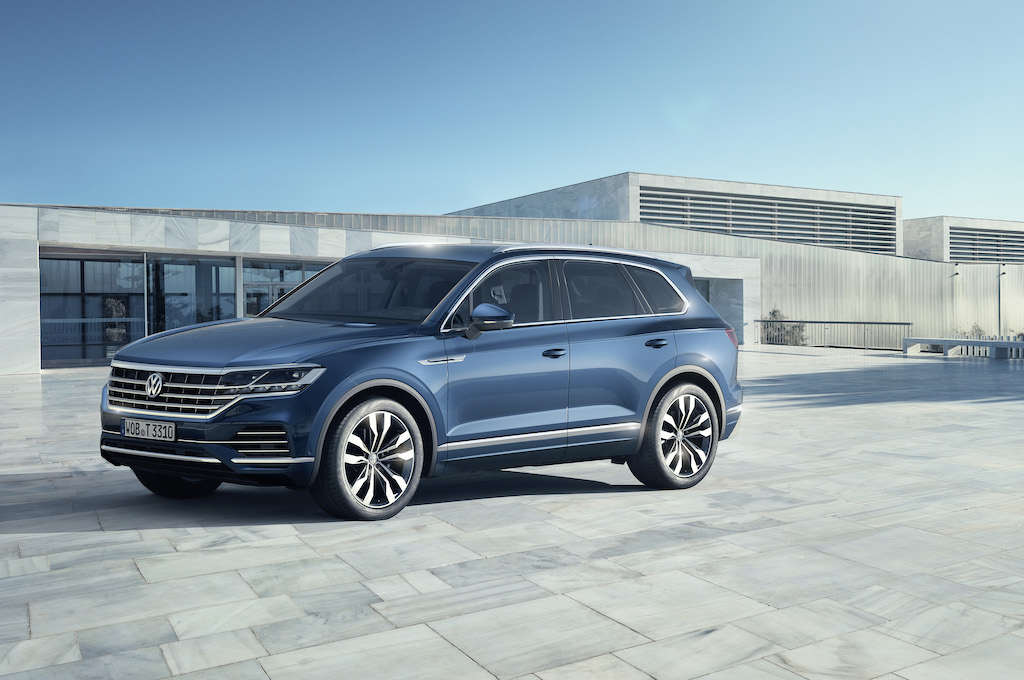 Finding a comfortable driving position in the Touareg is very easy. Both the steering wheel and driver’s seat get plenty of adjustment to ensure that, regardless of your height, you’ll be well catered for and there’s adjustable lumbar support up front. The seat goes high enough to ensure that even short folk to see the end of the bonnet. Heated front seats are standard on all models and ventilated and massaging seats are on the options list.

Where the old car felt like a jacked-up Golf from the inside, the new car is properly premium and a massive improvement. Inside, the Touareg sets a high benchmark for its intuitive layout and quality materials. It not only looks great, but it’s packed with functional features and practical touches. There’s leather everywhere you look, with lashings of metal and high-quality plastic throughout 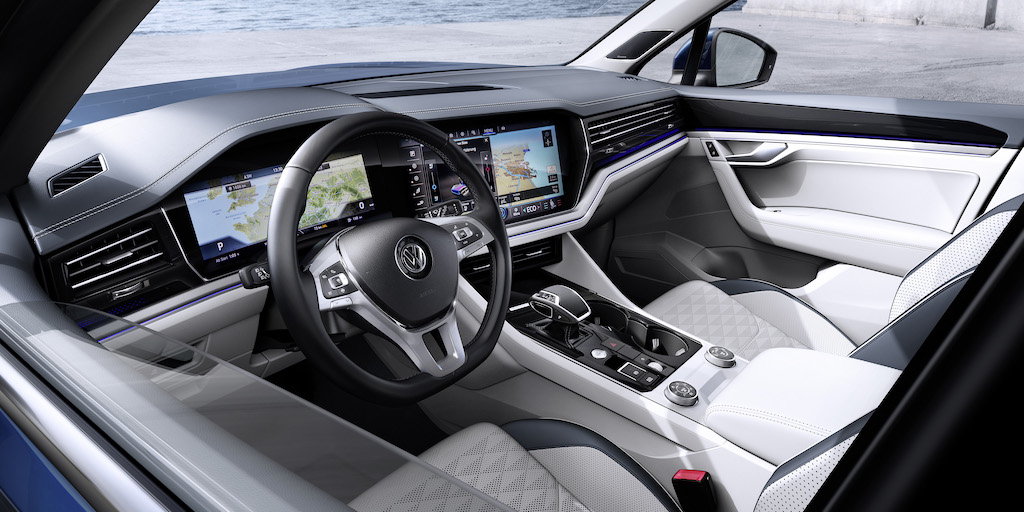 Thank to the ‘fully digitised Innovision Cockpit’, the new Touareg  got all the latest tech, including virtual instruments and a massive, glossy central screen, and this makes it feel bang up to date. For the most part the screen is easy to navigate and flits between functions with crisp efficiency.

You may notice that, as a result of its faith in touchscreen controls, VW has eliminated most of the physical buttons from the dashboard, but it has sensibly left a column of virtual icons down the side of the screen. Some of these operate mundane but necessary things such as the heated rear window, and some can be programmed to your preferred function, though sadly not to override that distracting lane assist function.

The good thing about that stack of virtual buttons is that it’s there whatever else the screen may be showing, which means setting maximum demisting or cancelling the stop-start system doesn’t demand a tiresome journey through several submenus. So that’s nice. It’s all nice!

The car system is compatible with both Android Auto and Apple CarPlay and features a WiFi hotspot that allows up to eight devices to be connected at one time. The cabin ambience is massively improved, especially if you opt for the double-glazing which puts the outside world on mute. However, if you go diving below the cabin’s waistline, you can see that some of the materials are slightly plasticky, probably to pay for all the electronics and those two giant slabs of glass. 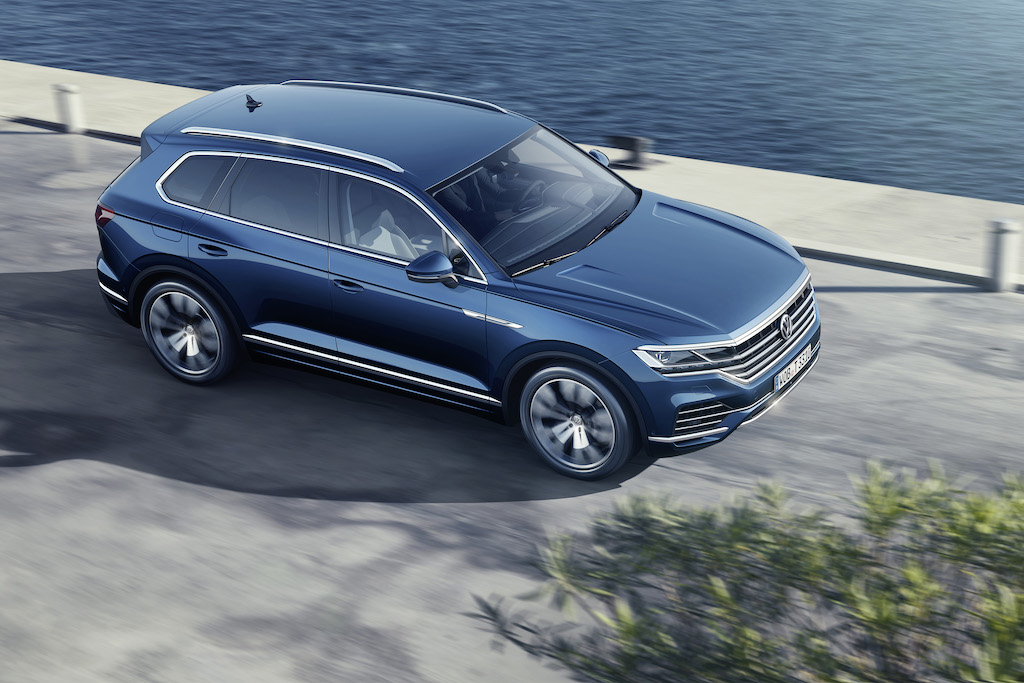 There’s a whole host of potential tech onboard too including: ‘Night Vision’ to detect (and hopefully avoid) humans and animals in darkness via a thermal imaging camera, LED matrix headlights, Roadwork Lane Assist (to steer, brake and accelerate for you up to 60km/h), a hyperactive pedestrian presence, head-up display, trailer assist, park assist and 360 cameras.

In terms of oddment storage, there’s a big cubby in front of the gear selector that can include wireless phone charging, a pair of big cupholders and storage under the armrest.

About the boot, the load area is a square shape, with virtually no loading lip, and there’s a kneeling function that lowers the back of the car if you’ve opted for air suspension 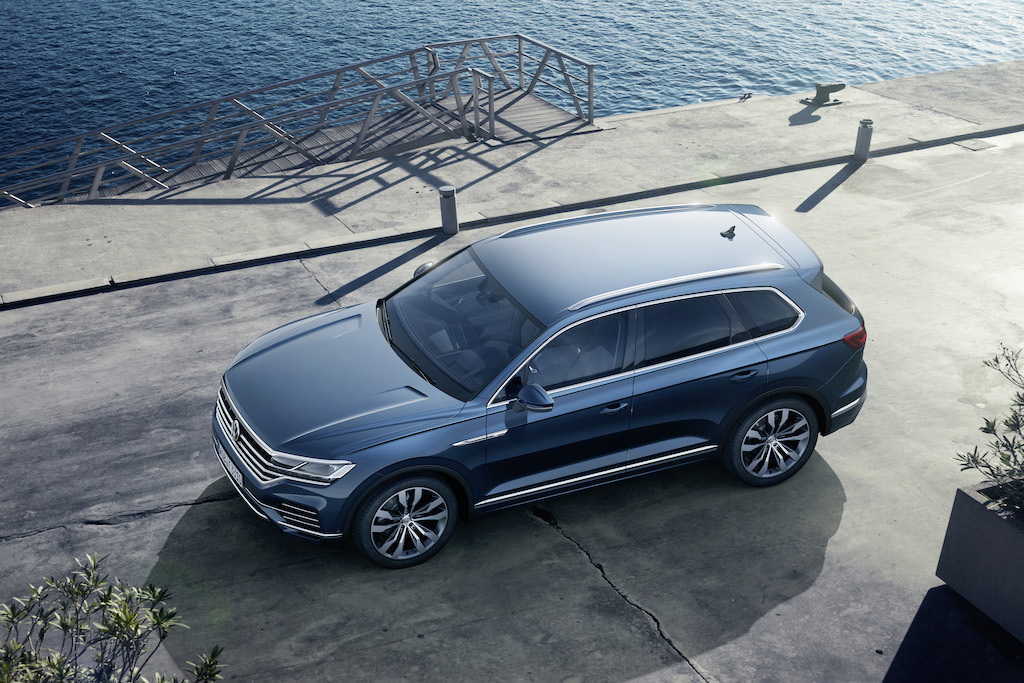 Both V6 diesels are smooth even under hard acceleration and both are virtually inaudible at a motorway cruise. The 282bhp version is quick, too; Volkswagen claims a 0-100km/h sprint time of 6.1sec, which is perfect for embarrassing hot hatches with your 2.1-tonne SUV. But GUSmen is tempted to stick with the entry-level 228bhp unit: it’s still more than powerful enough and usefully cheaper to boot. 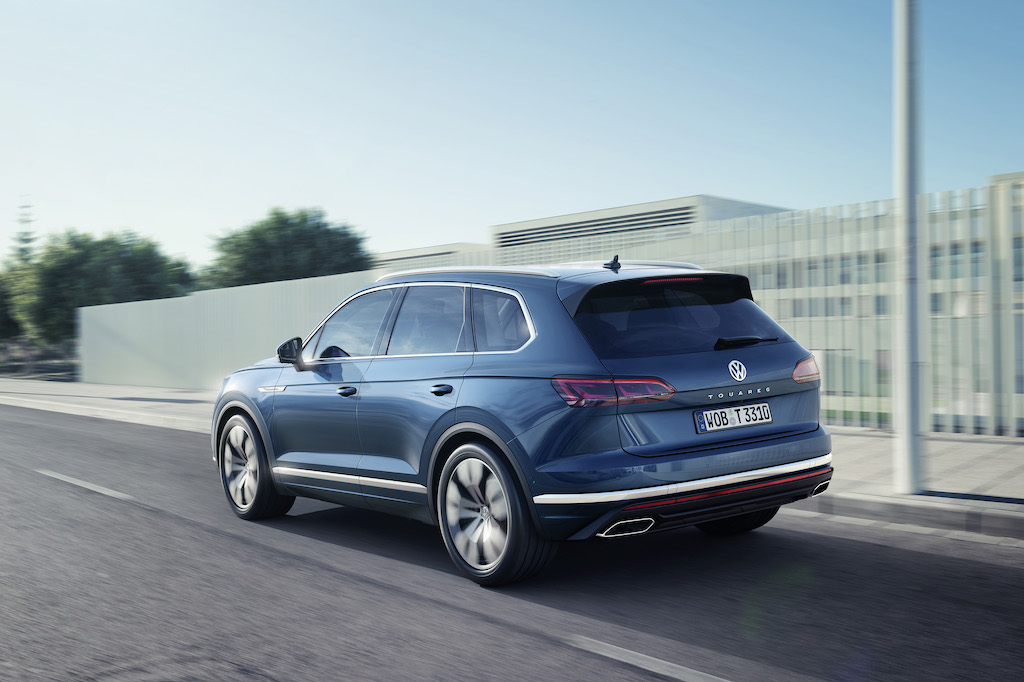 More importantly, both make plenty of power low down in the rev range, so you don’t have to thrash the wheel nuts off them to make quick progress or pull your horsebox down the road.

Every Touareg comes with four-wheel drive for sure-footed progress on the road, even when conditions get tricky. The standard eight-speed automatic gearbox, meanwhile, slurs smoothly between gears when driven gently, but can prove rather hesitant at times.

Even in Sport mode, there’s a pause before it’ll shuffle down a couple of cogs and give you full acceleration.Also there are four off-road modes (Snow, Sand, Gravel and Expert) as part of the Off-Road pack. 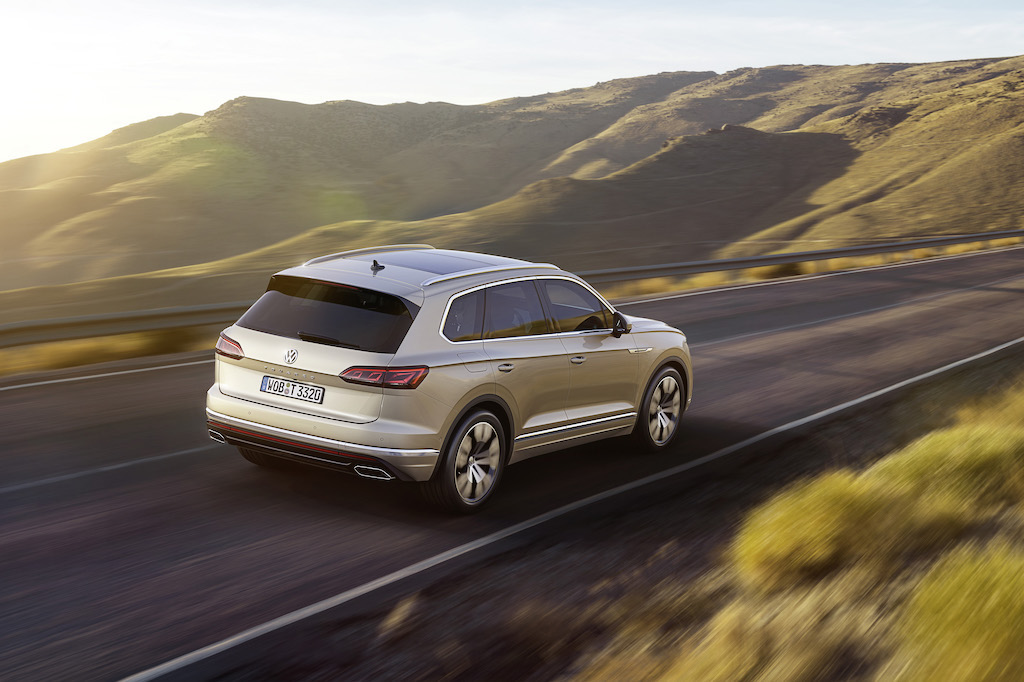 About confort  on all roads, we like it to ride bumps a little more softly. There’s a Comfort mode for the (optional) air suspension, which sits below the setting labelled.

Not only does air suspension allow you to raise and lower the Touareg to suit high-speed running, off-roading or easy loading, but to stiffen or slacken the suspension depending on whether you’re cruising or charging. It certainly gives the Touareg a relaxed motorway ride that allows you to cover long distances comfortably, but broken urban roads do still make the car jiggle a little, 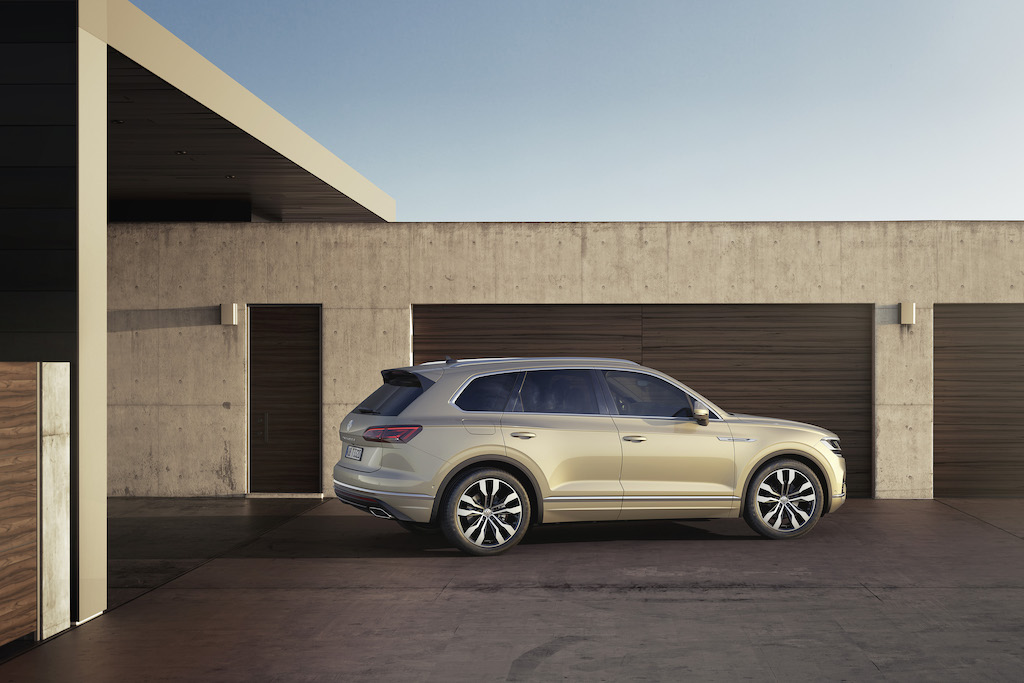 The Touareg is a large, practical, user-friendly car that would fit neatly into your life without annoying you or attracting too much attention.

Both inside and out it’s been thoroughly modernised and really has something to shout about. Fully-loaded, it’s a proper tech powerhouse and the flagship that VW will be showing off for a while.  It feels well made. It’s a big old bus yet it can clip along nicely, soaring along roads and joining motorways at a confident stride.  Sophisticated, high-tech interior and engines for all situations make this car one of our favorite car this year!