When it comes to car names, especially those from German brands, it’s usually safe to assume that the bigger the number, the bigger the car. Cram as many superlatives into an official description as you can, and you’ll have an idea as to how Audi regards its Q-brand range-topper. It’s not a simple vehicle intellectually or practically, but Audi hasn’t skimped, which means there’s a lot going on here that needs unpacking. 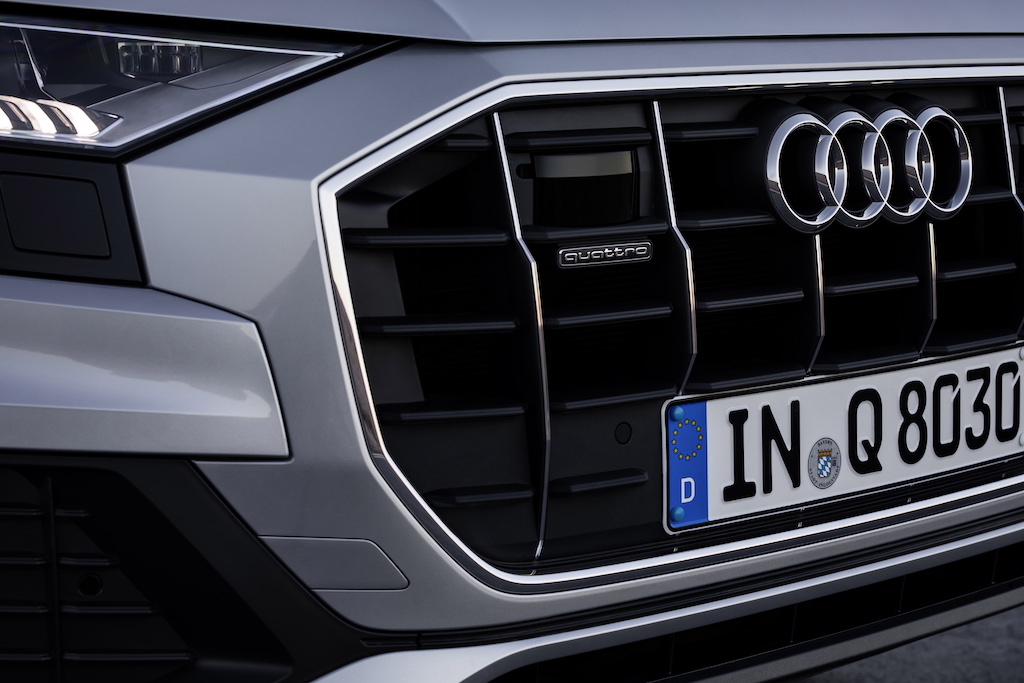 Most obviously, it apes the A8 saloon’s slick, chunky and mega-mouthed design language, while being stuffed full of various strains of tech and looking expensive. It’s also a four-door, five-seater ‘with coupe styling’ – which just means the rear slopes more than a Q7 – though the frameless doors are actually really very neat, and unique in the segment

For more than a decade, the A8 limousine sat pretty and unchallenged at the very top of the Audi showroom model hierarchy, before the R8 super-sports car came along in 2006, admittedly as something of a speciality interest. Now, though, the Audi ‘8’ club swells to include a third member. So who’s the daddy: limousine, sports car or pumped-up SUV? 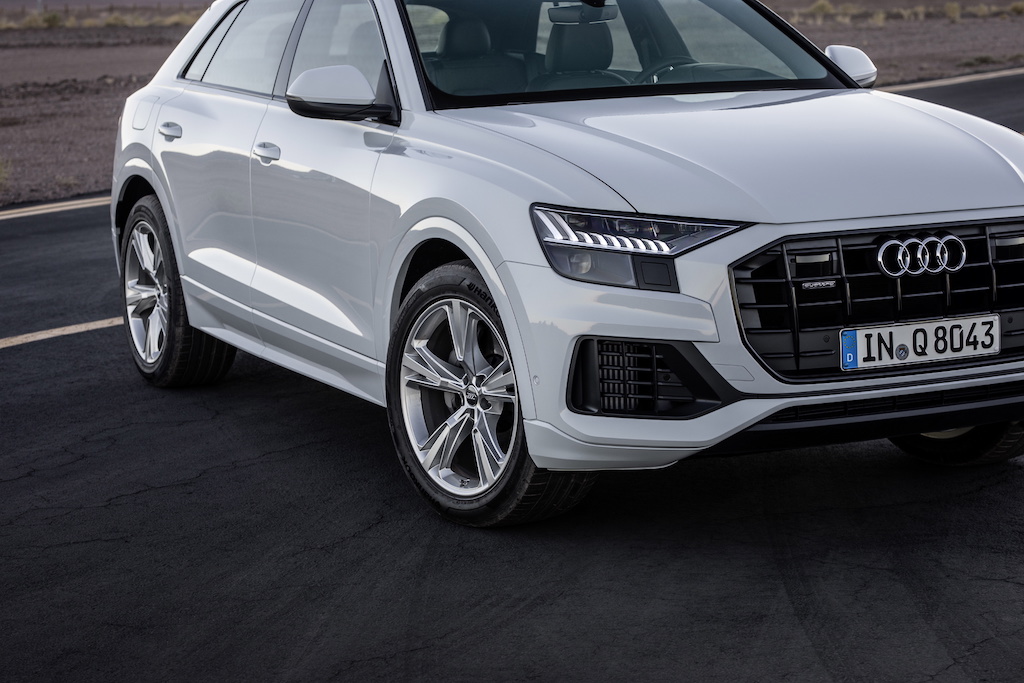 The Q8’s mission, according to its creator, is to combine the elegance of a luxury coupé with the comfort, convenience and versatility of a large SUV

Making big, versatile and spacious cars look more elegant has often only proved to render them less spacious and versatile while adding little in the way of driver appeal.

The Q8 also brings a sloping roofline, a wider stance and the most aggressive front end yet seen on an Audi. 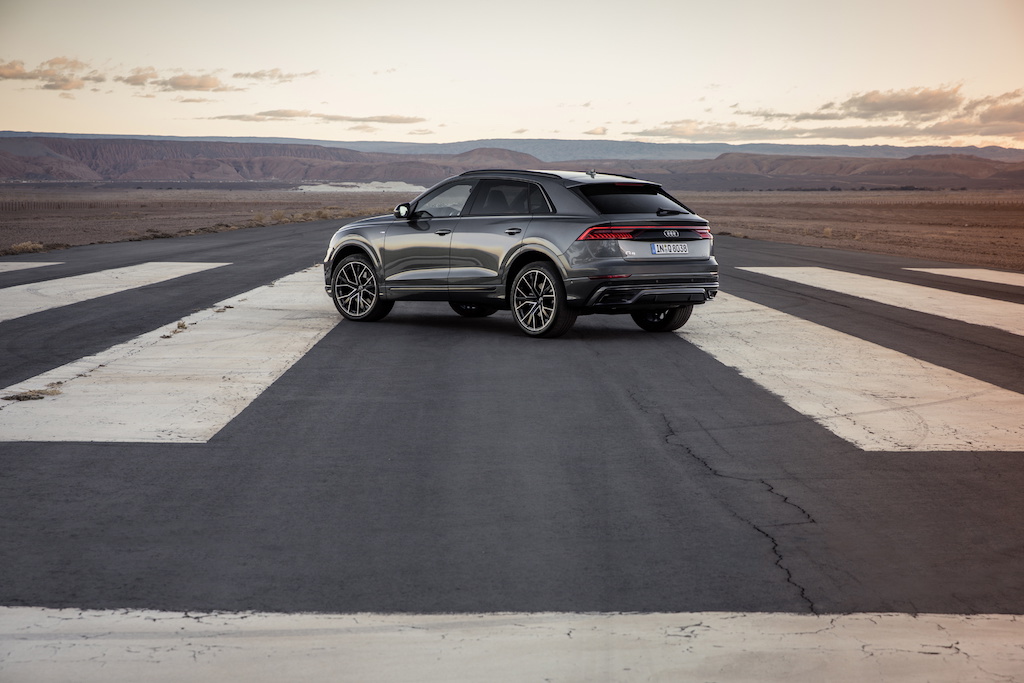 Although its model nomenclature might suggest otherwise, the Q8 is 66mm shorter overall and 35mm lower than its Q7 sister car. It has a body that’s 27mm wider (without mirrors) than that of the Q7, but it uses the same axle track widths and the same wheelbase.

Instead, Audi has given the Q8 a cabin that looks and feels pretty much exactly the same as that of the A7 Sportback. 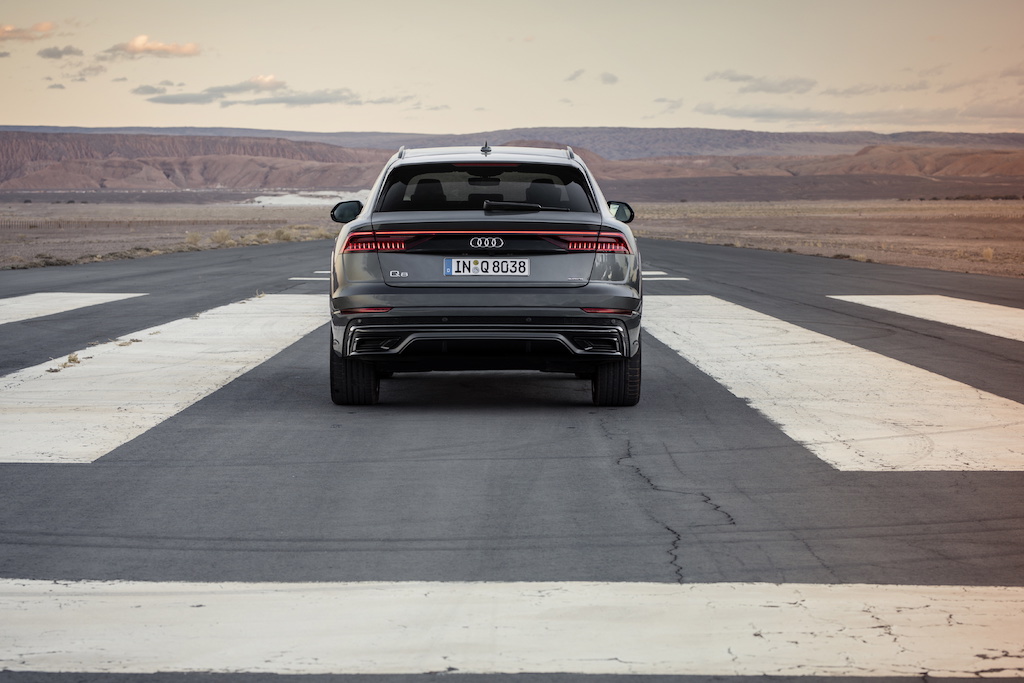 Taking up a sizeable amount of dashboard fascia real estate is Audi’s dual-screen MMI infotainment system, which comprises a primary 10.2in screen above a smaller 8.6in unit. 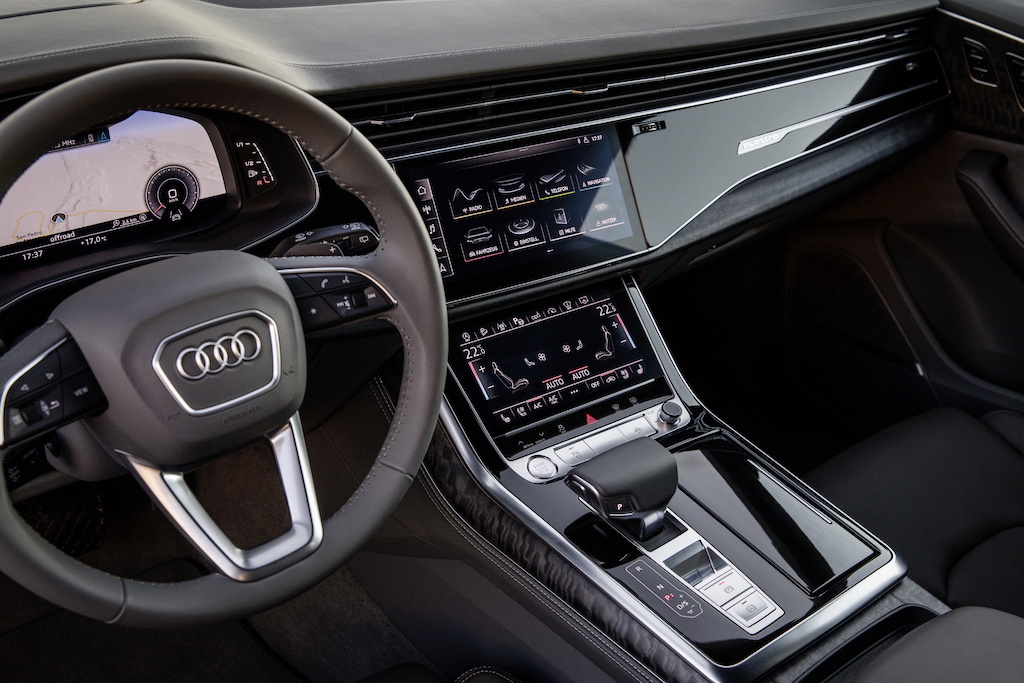 The upper screen controls all of the Q8’s features and functions, such as the satellite navigation, vehicle settings and telephone connectivity, while the lower screen is intended to display those features you interact with most often, such as the air conditioning, radio and seat heating. 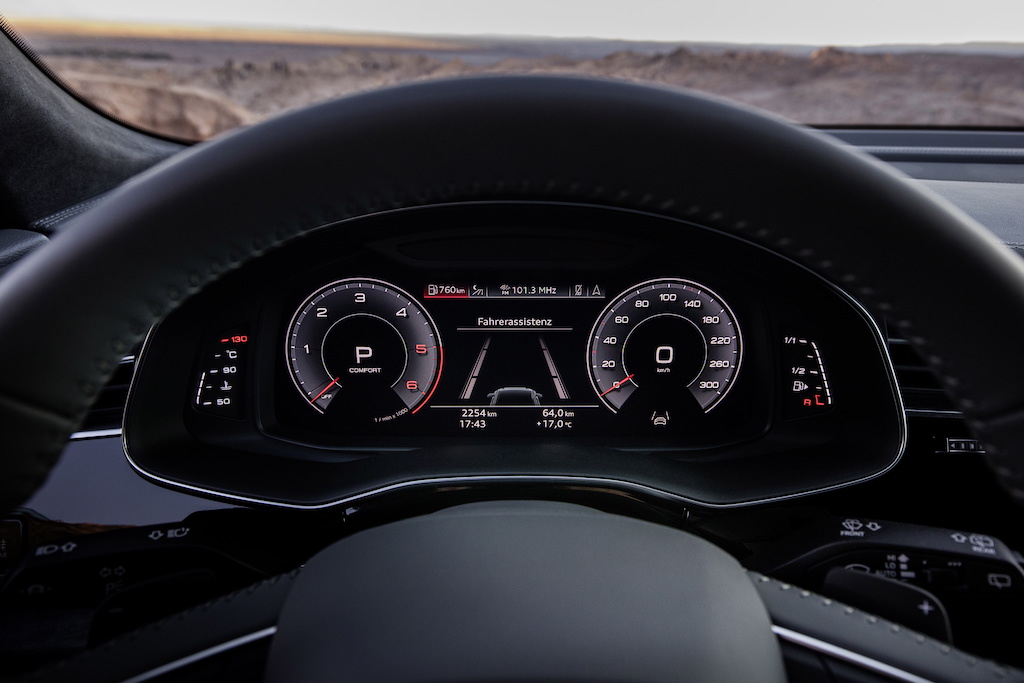 While these are technically touchscreens, mere contact with the screen won’t necessarily warrant a reaction; instead, you need to press down rather firmly, almost as if you were using the touchpad on a laptop computer.The responsiveness of the software is excellent, although having to press down on the screen so hard can take some getting used to. The quality of the graphics, meanwhile, is top-notch and entirely befitting of a flagship SUV.

The sports seats are excellent front and rear. Electrically adjustable front sports seats with adjustable lumbar support and an extendable base provide good long-distance comfort, while the steering wheel also offers a huge range of movement to help you find the ideal driving position. The rear seats split, too, so there’s every possibility that you can actually make use of the space to do practical things. Yes, a blocky Q7 is bigger (and has seven seats), but you don’t buy a Q8 for that!

Visibility all around is excellent – even out of the back, despite the sloping roofline – and is helped further by a reversing camera and clever Matrix LED headlights, both of which are standard, along with a heated windscreen. 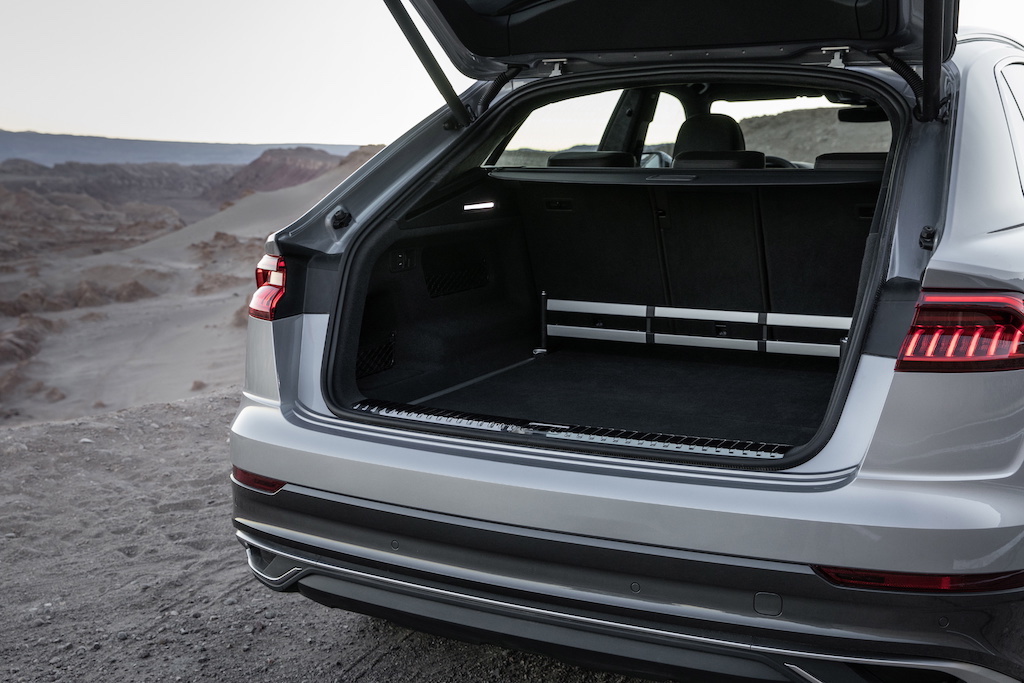 Boot volume, meanwhile, comes in at a capacious 605 litres.

As you might expect, all Q8s will feature quattro AWD (with a standard locking centre diff) plus air suspension as standard, all get a slick eight-speed automatic gearbox, and in the UK we get two trims: S-Line and Vorsprung, both with considerable kit to play with. There is three engines available, the 50 TDI (286bhp, 3.0 diesel) with a 231bhp version of that same engine badged ’45 TDI’ and a 340bhp 55 TSI V6 petrol.

Fortunately, the 50 TDI is a good engine, pulling strongly from low revs and always feeling like it has plenty of power in reserve.

The engine is effective (0-100Km/h in 6.3secs is very respectable), although it sounds ‘light’ in operation and isn’t characterful in any way. 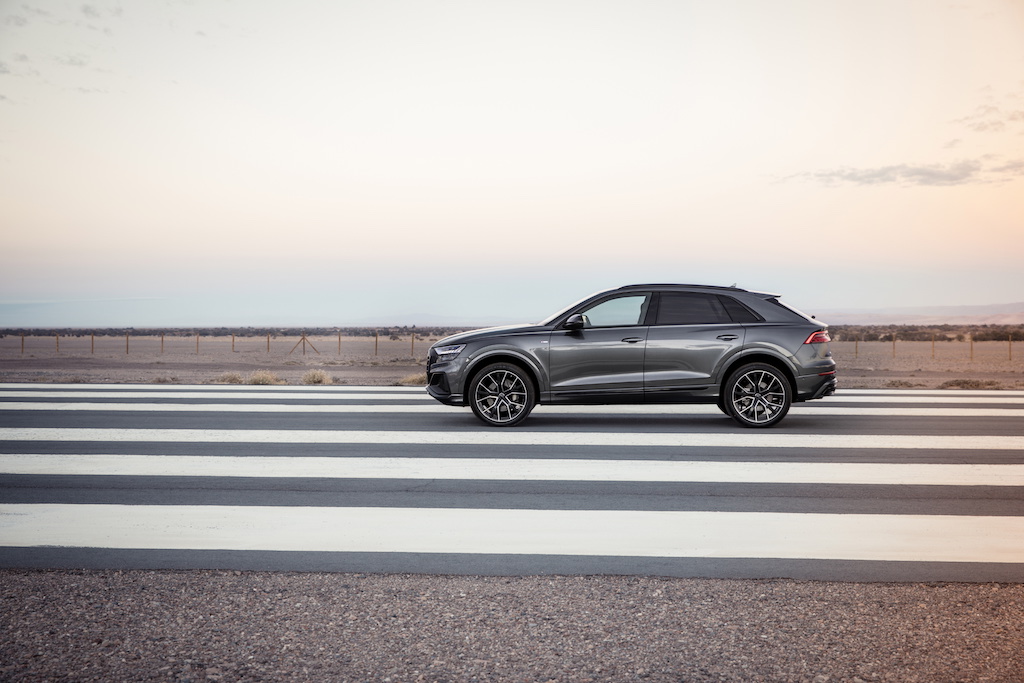 GUSmen tried the 50TDI thus far (there’ll be an RS at some point in the future, as well as the other models), and it’s a rapid, comfy cruiser with a surprising ability to go around corners.. It’s mostly an exciting car to drive, but it disguises its size brilliantly, and has a decent stretch of dynamic change from the seven different – selectable – modes.

‘Comfort’ really is leggier and softer, ‘Dynamic’ noticeably firmer and more responsive with a 40mm drop. This sounds obvious, but it isn’t always the case. There’s also an off-road mode, which raises the suspension 50mm from the Comfort/Standard position in case you need to potter down a track.

With adhesion and stability a given, the optional four-wheel steering and a predictably uncommunicative electro-hydraulic rack help lend the car unusual agility. You can drive deep into corners without unreasonable fear of either understeer or misplacing such a giant footprint. 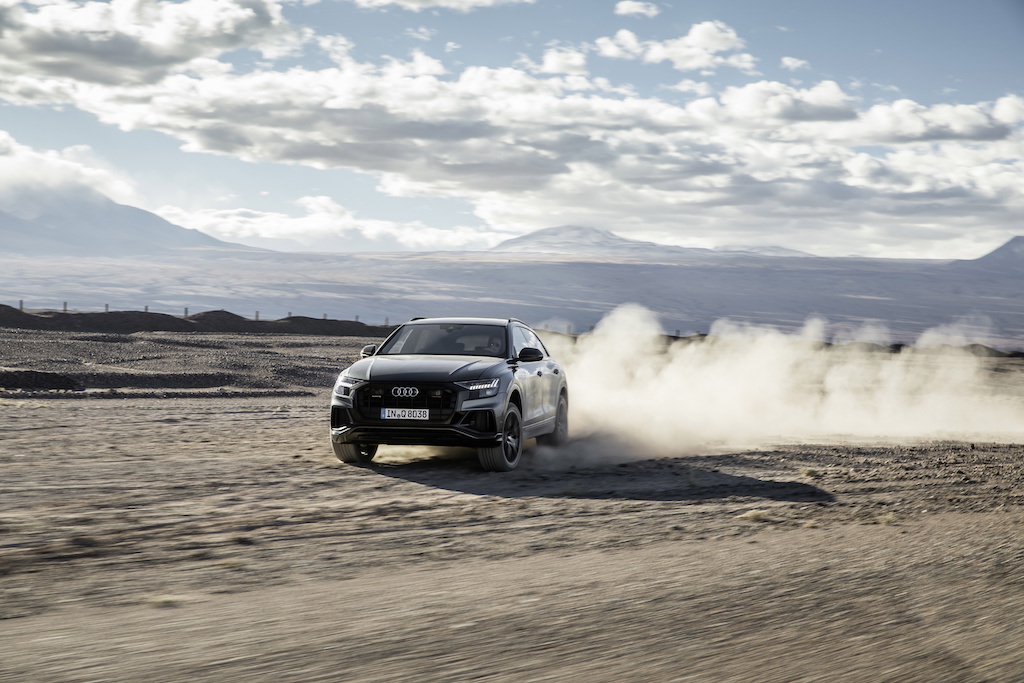 The Q8 is actually a mild hybrid, meaning its engine can turn off for a limited amount of time at a cruise to boost efficiency – a system that works so well that you don’t even notice it happening. As a bonus, it makes the engine stop-start system noticeably smoother than those in rival cars.

Audi’s big, aggressive Q8 is interesting and clever, with a side order of *whoa*

What feels initially like yet another thinly- sliced niche actually resolves into a very capable SUV that’s a good deal more practical than the looks would suggest. 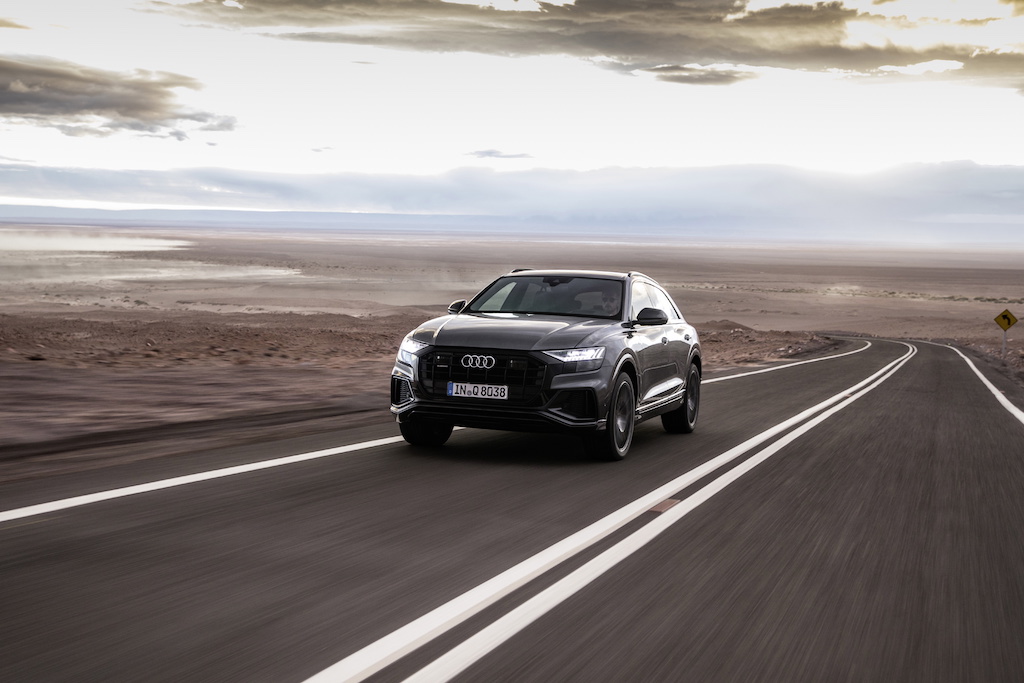 It’s polarising in terms of styling, but it certainly isn’t dull, and you can change the entire aesthetic with a choice of exterior colour. The interior is fantastic, the technology enough to make you feel like an early adopter, and it’s all executed in a way that makes you feel like this is definitely a class-leader in terms of gadgets. It’s not a driver’s car, but neither is it embarrassed by anything. An interesting, clever car from Audi.