If you fancy a Volkswagen that won’t only please your rational side but will also tug merrily away at your heartstrings, GUSMEN reckon the Volkswagen T-Roc should fit the bill perfectly. Certainly from a looks point of view, it proves VW is very able of producing cars with flair as well as functionality. 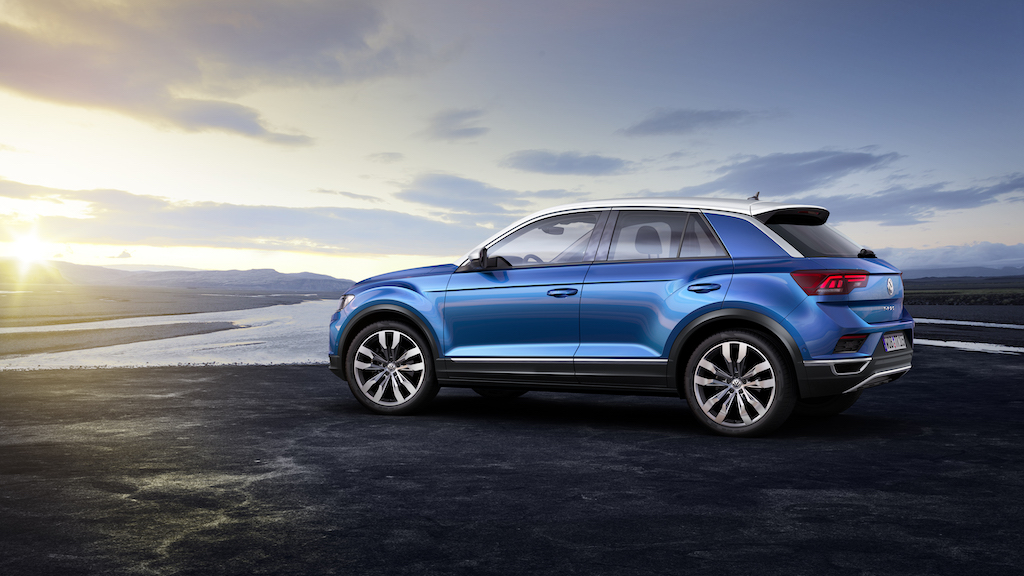 T-Roc is just what the market ordered: A stylish crossover for people who don’t need family space.

Combining the high-riding driving position of an SUV with the exterior dimensions of a more regular-sized hatchback, it marked the birth of what’s widely regarded as the first commercially successful crossover hatchback.

Compactness is part of VW’s positioning of the T-Roc as a sportier, better-looking and more desirable kind of crossover. It’d be difficult to mistake the T-Roc for anything other than a Volkswagen. 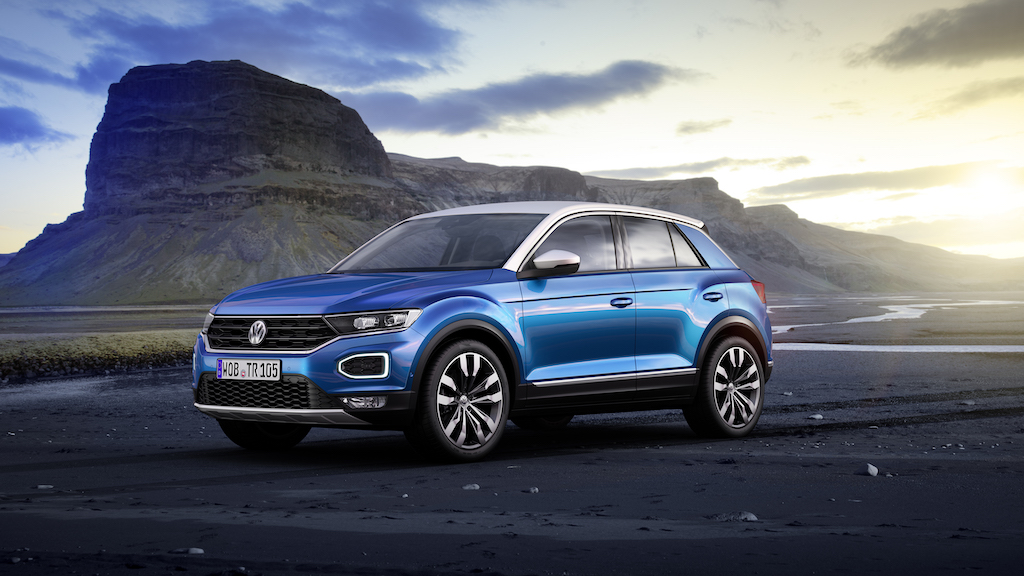 Getting comfortable in the T-Roc is easy thanks to its wide range of adjustment for the seat and steering wheel. It’s a pity that there’s no standard adjustable lumbar support on any trim, but at least you can add it (on all but the entry-level version) for a nominal sum.

If you like to sit high up, the T-Roc puts you a bit further from the road than lower-riding small SUVs.

The optional Active Info Display (standard on range-topping SEL trim and optional on SE and Design) replaces conventional analogue instrument dials with a screen that presents a vast amount of information very clearly. It can even show you a full-width sat-nav map, assuming you have sat-nav fitted. 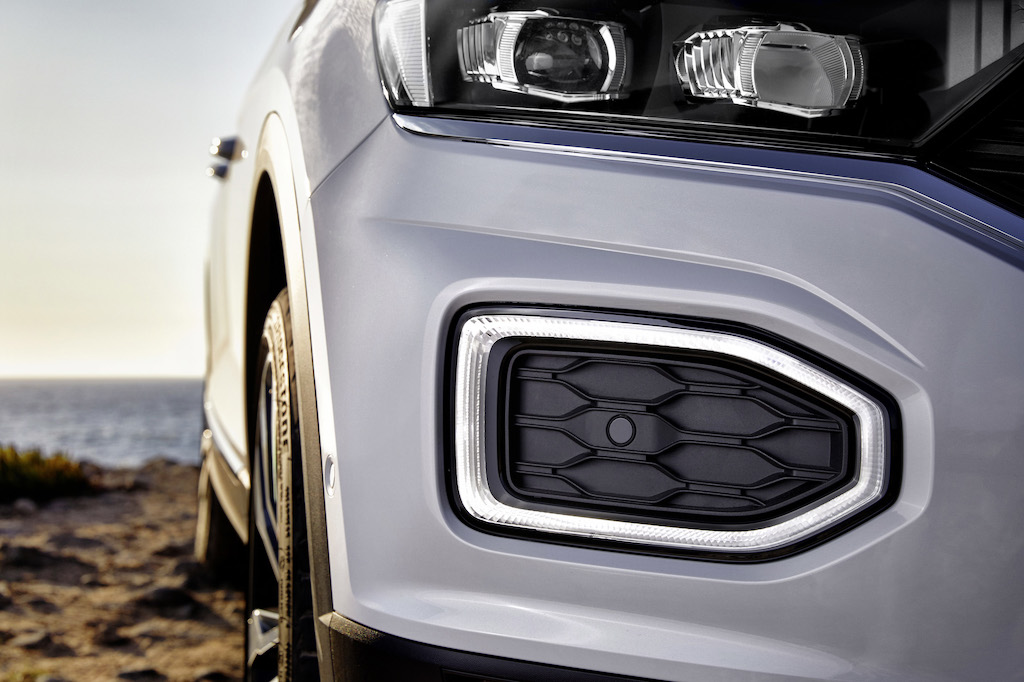 Bright LED headlights that offer great illumination at night are standard on range-topping SEL, but are a pricey option on all other trims.

The T-Roc’s standard touchscreen infotainment system is the same 8.0in unit that you’ll find in the VW Golf, but because it’s positioned higher in the T-Roc, it’s easier to keep half an eye on the road while operating it. 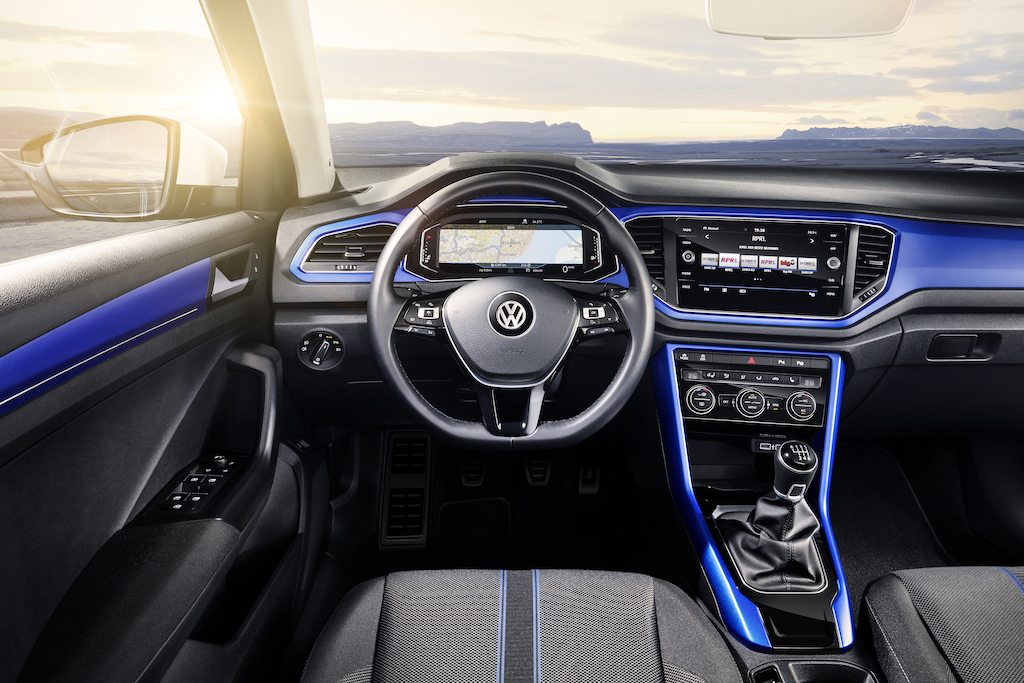 This is just as well because VW has done away with physical shortcut buttons of the kind you can feel your way around after a little familiarisation. Instead, the buttons either side of the screen — for directing you to the various menus — are touch-sensitive, which look smart but require that you study them to make sure you can find the one you need.

Otherwise the system is great to use, responding quickly to screen-prods and providing well structured menus that prove a doddle to navigate. What’s more, Apple CarPlay and Android Auto smartphone mirroring comes as standard on all but entry-level S trim, where it’s a reasonably priced option.

It’s worth nothing that sat-nav is a very expensive option on all but range-topping SEL trim. You also have to pay extra for wireless phone charging on all trims, which comes as standard on some of the T-Roc’s rivals.

It’s unlikely that anyone will take a front seat in the T-Roc and find they don’t have enough room. Not only do the seats slide back a long way, they drop low enough to give those long in the body plenty of head room. As for width, you certainly won’t be clashing elbows with the person next to you.

The optional glass roof finishes just ahead of the scalps of those sitting in the back, leaving space for useful recesses that will keep the heads of even taller passengers from brushing the headlining. 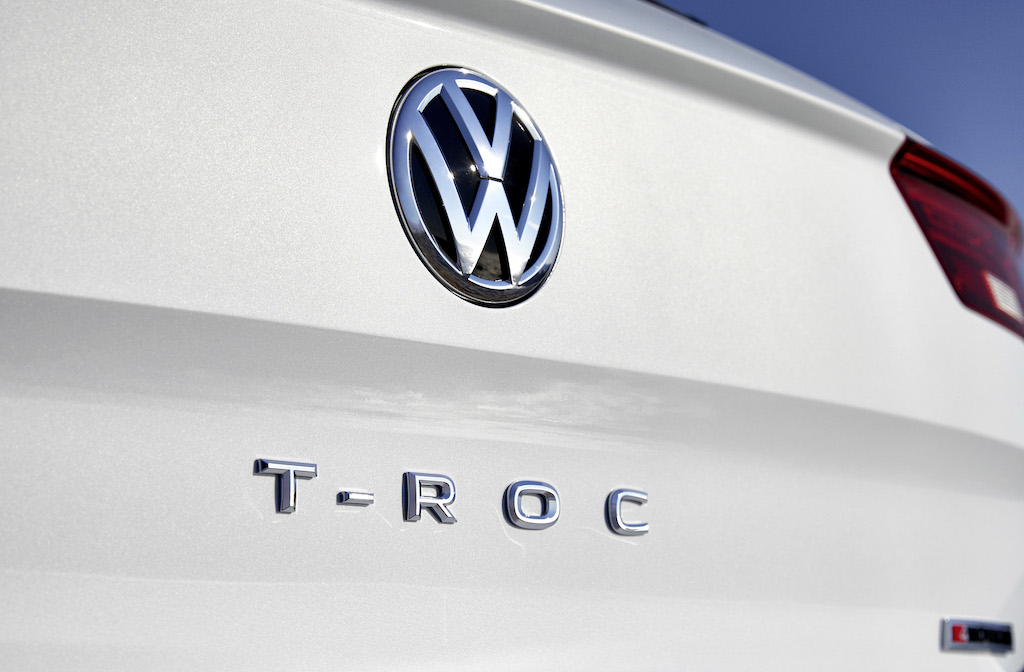 The T-Roc also offers a large centre cubby that can be upgraded to feature wireless phone-charging. You also get wide door pockets and additional storage under the front armrest.

Although rear head room in the T-Roc is decent, leg room is less impressive.

As for storage space, there are pockets on the backs of the front seats and space for a can of drink in each rear door. 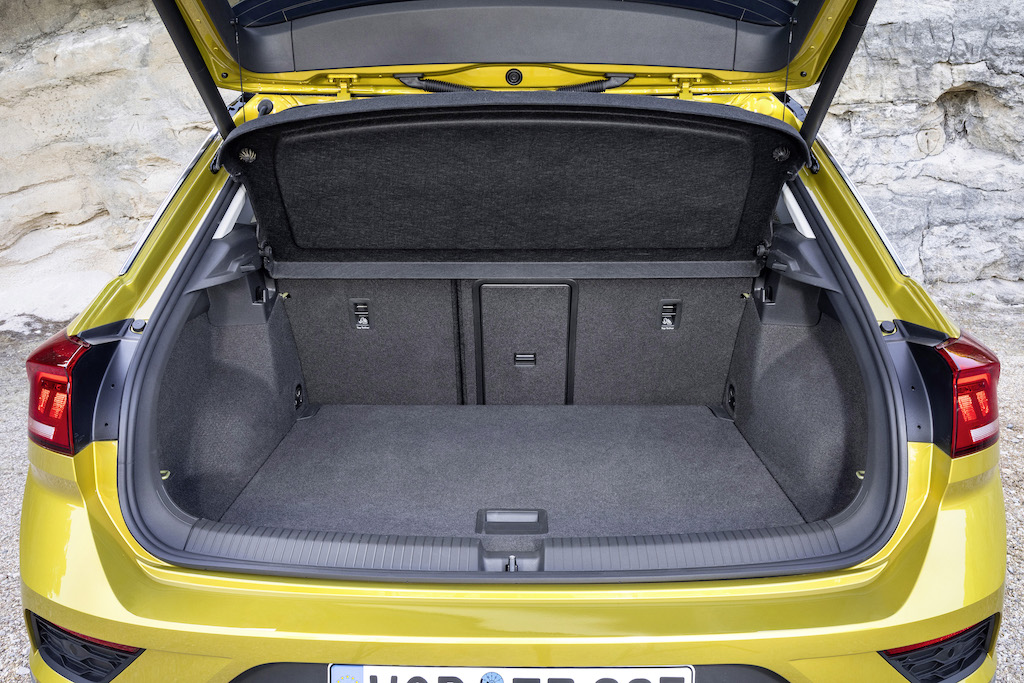 The T-Roc’s boot is a practical, square shape, and at 445-litres. 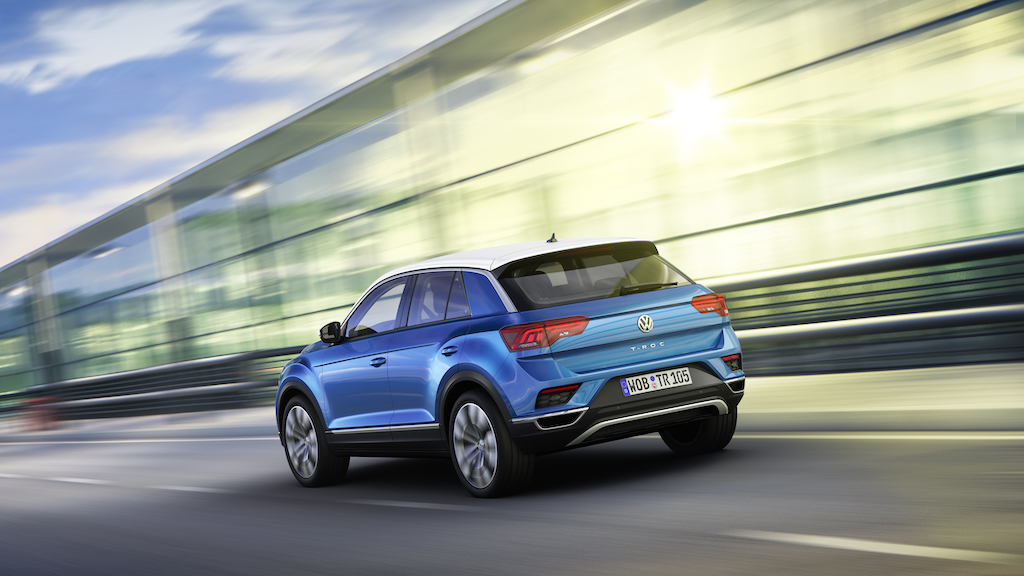 Power is generally sent to the front wheels, although the 2.0-litre petrol and diesel engines are paired with VW’s 4Motion part-time four-wheel-drive system as standard. The multi-plate-clutch-based system sends the bulk of the engine’s power to the front axle the majority of the time, with the rear axle being involved either as traction deteriorates up front or more consistently depending on the selected driving mode.

A six-speed manual gearbox is standard fare for all but the 2.0-litre petrol, which has a seven-speed dual-clutch transmission. 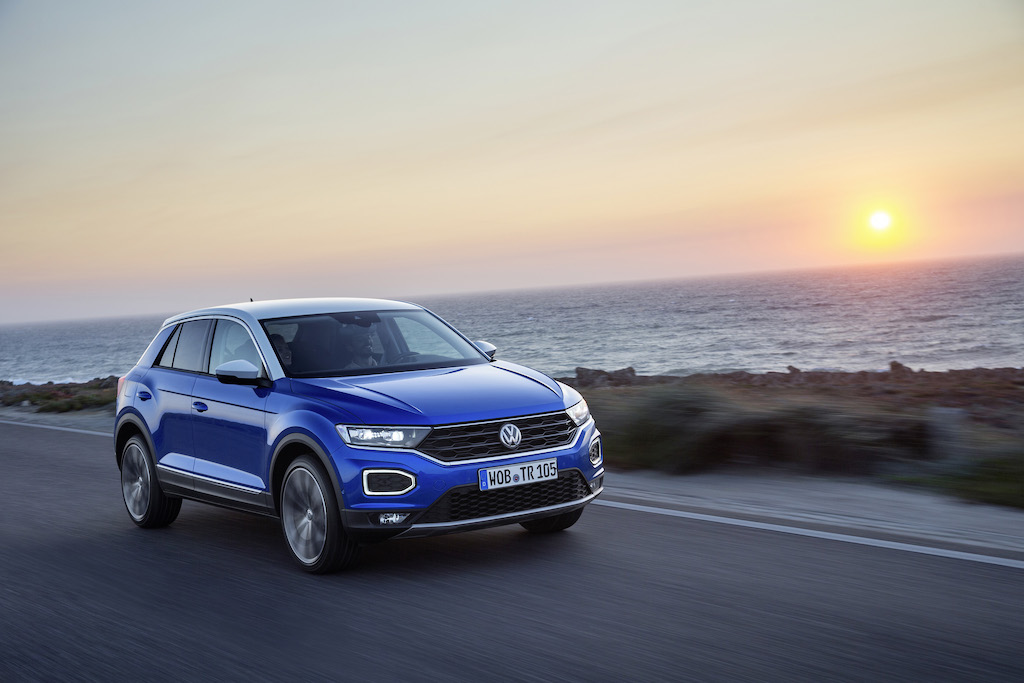 The 2.0-litre TSI makes the acceleration sprint in 7.2sec, and does feel lively, though the engine is harsher-sounding than in many VWs.

The T-Roc’s range of driver assist tech is pretty good if not class-topping. Every version gets as standard lane assist, a system that works more smoothly than most in nudging the car towards the middle of its lane. Front assist and emergency warning/braking includes pedestrian detection, and is also standard. Options include radar cruise control that, with auto transmission, works down to traffic-jam speed. Self-parking is on the menu too. 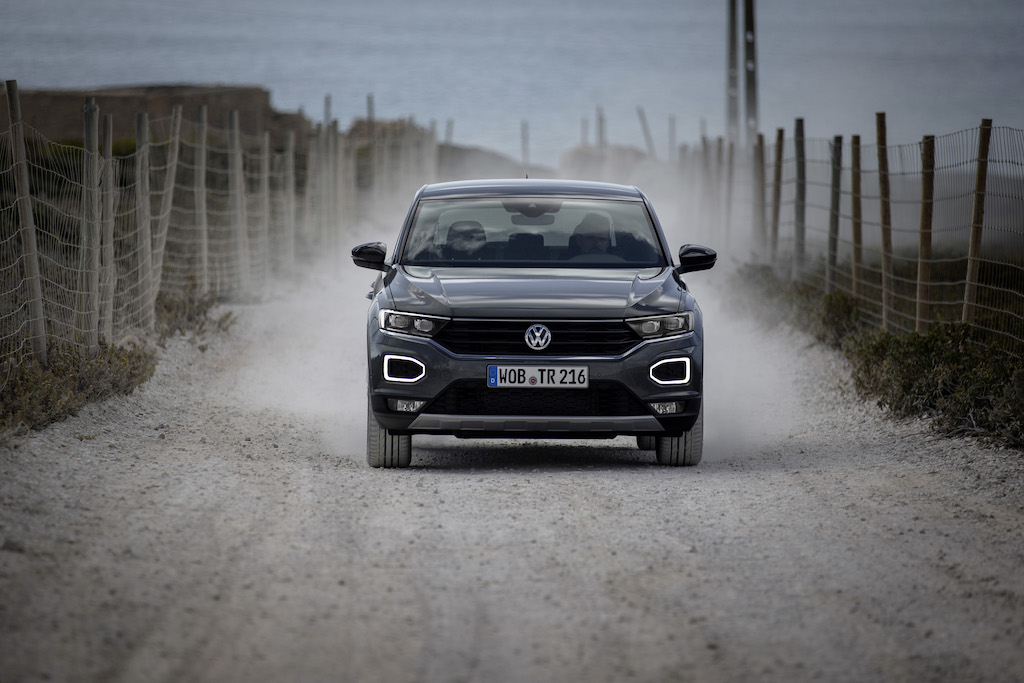 The T-Roc is one of the most comfortable small SUVs on the market. That said, as is the case with most SUVs, you feel urban imperfections and expansion joints more than you would in lower-riding cars, such as the VW Golf.

This car has smoothness and polish, too, being particularly quiet and well mannered when cruising at low and high speeds, and is also well matched to a smart, quick-shifting dual-clutch automatic gearbox that impresses in both automatic and paddle-shift manual modes. 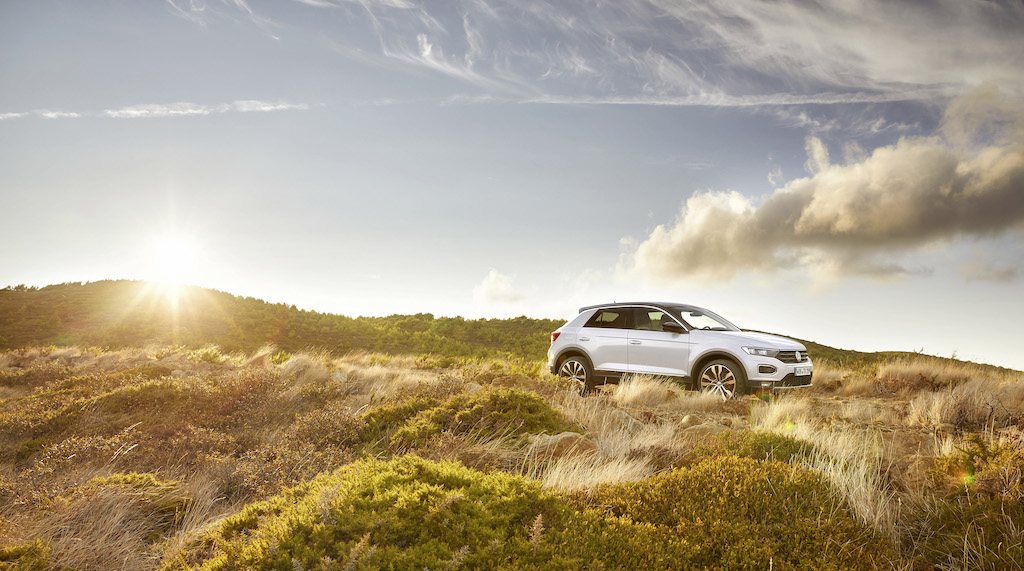 It’s plainly a striking thing to behold, too, being more athletic, elegant, purposeful and interesting in its slightly decorated appearance than the crossover norm, although you’d never call it shouty or over the top.

As well as style, there’s substance, too.. The T-Roc is also packed with the latest technology, for both convenience and safety.

The T-Roc is one of countless compact crossovers introduced over the past six months, but it stands well clear of most within that melee as both something to look at and interact with. It offers a rare degree of perky performance and polished ride and handling in this niche. So class champion or not, the T-Roc is our kind.