If you think big luxury cars are irrelevant to you, remember that, like its predecessors, the latest Mercedes S-Class is rammed full of clever technology that will eventually filter down to more mainstream models. 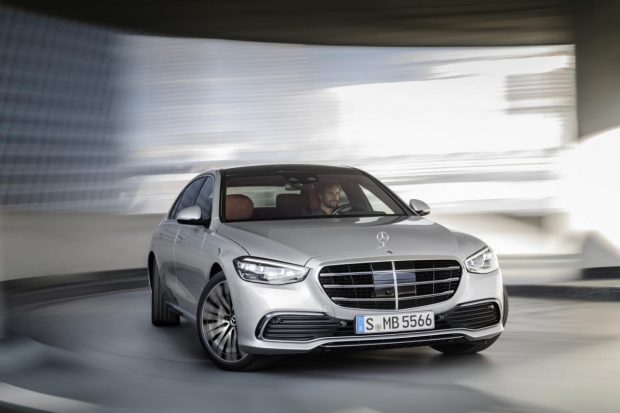 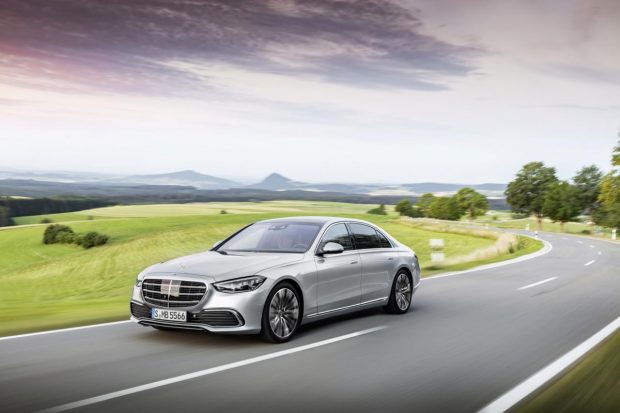 For a start, there’s its interior. The giant (12.8in) portrait-orientated infotainment touchscreen and 12.3 in driver’s display leave barely a button to be found. And, if you opt for one of the higher trim levels, the S-Class will even give you a hot stone massage. 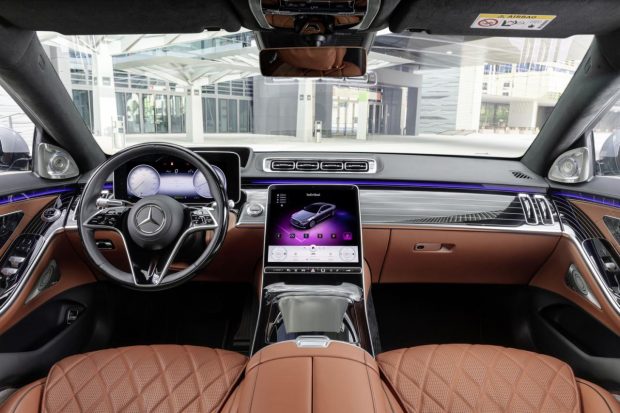 Inside, the S-class prioritizes screens. Lots of them. The sedan is available with up to five, including a giant center touchscreen and a 12.3. inch digital gauge cluster. The latter works in concert with other technology to create a three-dimensional effect, but—thankfully—it can be turned off if you’d prefer the screens have a conventional appearance. There’s also an enhanced head-up display that will show navigation directions in augmented reality. Basically, arrows move and turn in real-time to supposedly better assist the driver. The build quality and cabin materials live up to Mercedes’ upscale standards, and the sedan provides limousine-like accommodations for all passengers, specifically those riding in the back. The new model’s rear-seat area offers slightly increased headroom and legroom, and it can also be equipped with power-adjustable reclining seats that have massage functions and extensive heating elements. Along with being physically coddled, those in the back should be mentally entertained by the optional rear-seat entertainment system that adds two 11.6-inch screens on the front seatbacks as well as the interactive LED interior lighting. 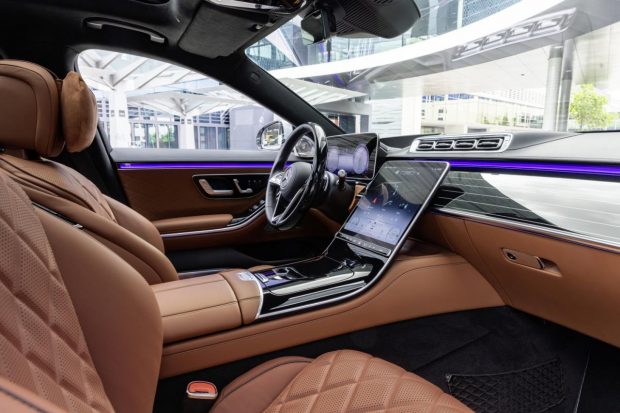 A cutting-edge infotainment system has become a hallmark of modern luxury cars, and Mercedes makes good on that with its latest and greatest interface. The sedan’s center stack is dominated by a huge 12.8-inch OLED touchscreen that sits portrait-style, but it doesn’t come with any sort of touchpad or rotary controller. What it does come with is an enhanced version of Mercedes’ MBUX software that features improved voice-command functions and smartphone-esque capability, including facial recognition and fingerprint scanning. Of course, popular staples such as wireless Apple CarPlay and Android Auto, and wireless charging are standard. The S-class sedan also has a standard Burmester 3D sound system, but a more powerful Burmester 4D stereo is available, too. 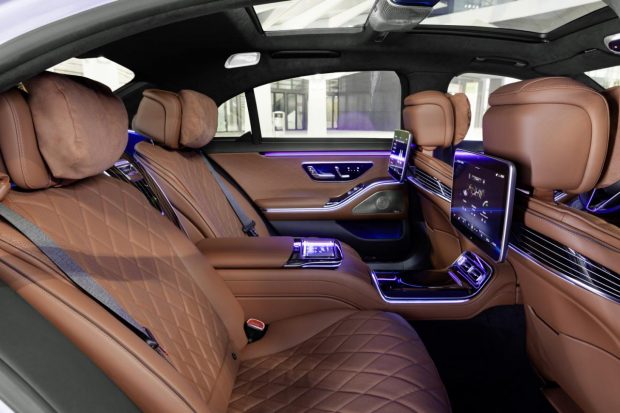 The quality of the S-Class interior is impressive (and improved over the previous model), with rich materials, including supple Nappa leather, real wood veneers, metal inserts and squishy plastics. What few buttons and switches there are work precisely, and the steering column stalks feel sturdy.

The Mercedes S-Class is a big, wide car, so space up front is, unsurprisingly, plentiful. There’s lots of leg, shoulder and head room for two large adults, even with a panoramic glass roof fitted. 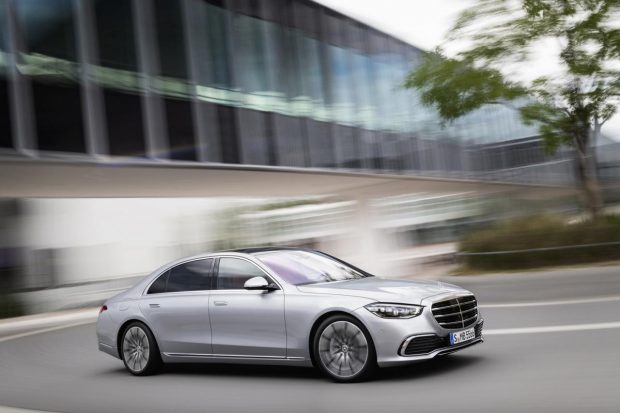 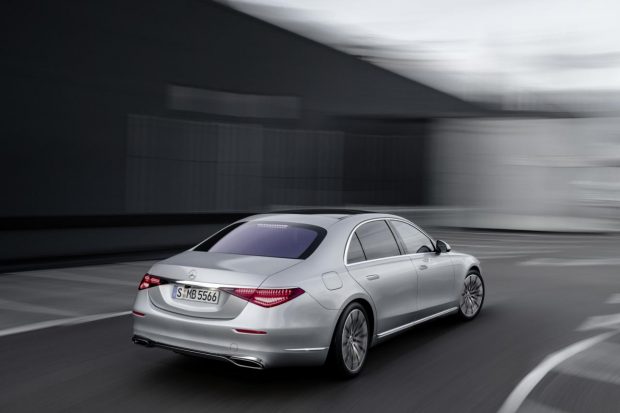 The wide, deeply padded front centre armrest has plenty of storage underneath. The armrests, including those on the doors, are heated in the top two trims. You’ll also find a couple of generously proportioned cupholders for the largest takeaway coffees, plus big door bins.

The doors open very wide, allowing the most generously proportioned driver and passenger to get in and out with their dignity intact. To aid the process further still, the steering wheel rises out of the way automatically on all versions.

Passengers in the back of the S-Class should have no complaints about the space on offer, especially with the long-wheelbase body style that’s optional with AMG Line Premium trim and standard on every model above.

All models come with a three-person rear bench and a sizeable fold-out armrest, while long-wheelbase models include electric adjustment for the outer seats.

If you opt for the most expensive AMG Line Premium Plus Executive, you’ll get an electrically extendable footrest that pops out from beneath the front passenger seat, plus sunblinds on all the rear windows.

Boot space is good for a luxury saloon: around 550 liters.

The Mercedes S-Class engine range kicks off with the 2.9-litre S350d diesel. Its 282bhp is enough for 0-100km/h in 6.4sec and, when you put your foot down, it feels more than strong enough, even in a car of this size. Importantly, considering this is luxury transportation, there’s no need to thrash it to make swift progress, although if you want more oomph, there’s also the 326bhp S400d, which reduces the 0-100km/h dash by a second. 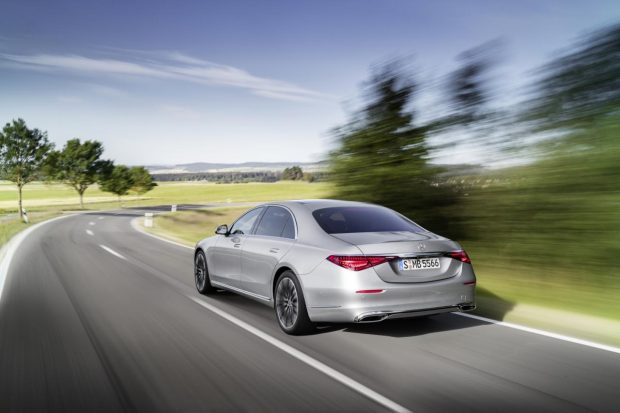 On motorways, in particular, the S-Class is exemplary. Its air suspension irons out dips and crests exceptionally well, and it’s one of the few cars in the world in which passengers can lie back with their head against the headrest and not have it kicked forwards over bumps. Therefore, it’s absolutely spot on for any cut-and-thrust tycoons that like to nap.

Even without investigating the various drive modes and the S-Class’s sportier settings, you’ll find it’s a very capable-handling car. The steering has plenty of reassuring heft and precision, so you can place the long nose easily.