A Skin So Soft is a documentary by filmmaker Denis Côté – a gentle, observational meditation on the world of bodybuilding.

I caught up with Denis Côté for a behind-the-scenes look at the film.

What drew you to the subject of bodybuilding?

I always wanted to make a documentary about Benoit – one of the six guys featured in the film. I’ve known him for 20 years. He was, and is still, very eccentric. A music lover and a free thinker, he became a bodybuilder in the early 2000s, then a coach, and now he’s into spiritual kinesiology.

He declined my offer, but I became interested in the people on his Facebook page. I knew bodybuilding was quite an old subject to approach, so I backed off for a while. But I kept thinking about the whole thing – about my own health problems and my relation to my body, about their passion and their discipline. I went to watch a competition one night and decided to interview a bunch of guys to see what kind of angle I’d find. 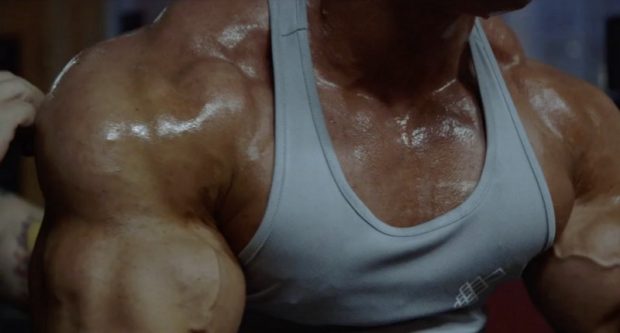 Do you have any personal connection to the world of bodybuilding?

I’m not interested in bodybuilding, and I don’t believe I should know everything about a subject to make a film about it. I did the same when I filmed JP Colmor in Carcasses, and when I visited two dozen shops to make Joy of Man’s Desiring. When I made Bestiaire, I had no agenda and wasn’t trying to prove a point.

I visit environments I don’t know much about and from there, I look for energies, paradoxes, poetry, and try to make something cinematic and maybe a little oblique.

Everybody saw and enjoyed Pumping Iron in the 70s, and there was no way I’d copy it or make a conventional documentary about the bodybuilding lifestyle.

How did you identify the men featured in the film?

Everything was a matter of trust. I approached them and had to gain their trust. It’s not an easy milieu to infiltrate. They didn’t know me or care to watch my older films or read about my thoughts or approach. They wanted the attention of my camera.

They gave me their image and vulnerability. I knew I had to be serious, and was walking a thin line of voyeurism and exploitation. I made long interviews with them, to know about their reality and about their private lives. It took me just a few minutes with each of them to fall in love with their discipline, passion, and dedication. It was no laughing matter. 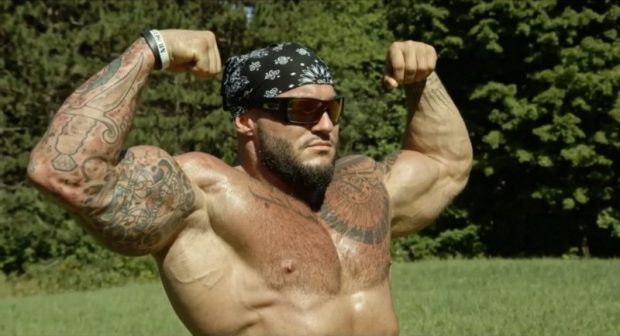 It’s an observational documentary, what led you to take this approach with the subject?

I wasn’t really interested in the usual – Why did you start? What do you eat? How many hours at the gym?

I became obsessed with the idea of showing these modern monsters or super-heroes through another light. There was no point filming the ‘core’ of bodybuilding – the routines and the boring gym stuff. Also, most of these guys aren’t great communicators, and I felt we wouldn’t get far with the intellectualisation of that lifestyle.

So, it became a challenge – no questions asked, observation, respect, protection. I felt I needed to show how fragile this whole ecosystem is.

We decided to do docu-fiction – what you see on screen is sometimes happening in the moment, but most of what you see is played for the camera, based on the interviews and the reality of each performer. Some scenes are completely staged, but it’s never far from what they really experience in real life. The film is lying, but the reality is not.

What was the commonality between the men you featured – was there any common motivations as to why they had embraced body transformation in this way?

I did a casting. I met maybe 15 guys and many were just not interesting. They had one obsession – the gym – and that was it. It wasn’t opening any doors to make a ‘different’ film. In the end, we have 19-year-old ‘natural’ kid who takes no steroids, Ronald is Chinese, Maxim is more of a strong man and wrestler than a bodybuilder – he actually hates bodybuilding. I’m happy with these six, because what matters in the end is the passion, the obsessiveness, the goal to achieve.

In that sense, they’re all the same, believe me. They’re all driven by the same torment, the same compulsion. Is it good? Is it bad? How essential and ridiculous is the goal? I made sure not to have an opinion on that. I filmed six guys with a passion. That was intense, romantic, and poetic enough for my camera.

Was the homo-eroticism of bodybuilding something that you were consciously exploring?

Most of these guys are very shy, but like to play very tough and very masculine. It’s a beautiful paradox. Very quickly you realise the homoerotic aspect of it all. I didn’t have to look or chase for it – it’s there. One or two of my guys can throw a homophobic joke here and there, but they also know that what they do is a celebration of the body, and they know what sort of image they carry around.

We never talked about homo-erotica, but we all knew it was there, floating, and I know it gives something interesting to the result. Most of us like to sexualise our bodies, and we look at others with a sexualised gaze. These guys see the body as a work of art, as a merchandise, a torment, as something that is never perfect. They waste no time talking about the sexualisation of it.

I was amazed by the absence of sex appeal during the competitions. You have hundreds of half-naked males and females everywhere, but everything is about sport and performance, nothing else. 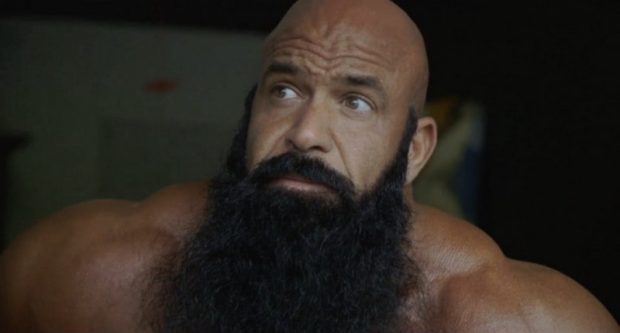 What does the film show us about men and masculinity?

I’m a bit puzzled by this idea of wanting to look like a super-hero. Their notion of masculinity is a little anachronistic. There’s something romantic to that. These guys are honestly completely disconnected from most of the world around them. It could be the third world war out there and they would still post pics of their calves and chests on Instagram all day long.

We can laugh at it, we can judge it, we can ask questions, but we can also think that there’s something awkwardly romantic about it. We’re all struggling with our weaknesses and past traumas. We find ways to deal with that. These guys suffered a lot in the past, and at a certain point they had enough and decided to take their revenge on society.

Bodybuilding is an escape for most of them. I don’t have to be interested in the solution, but I can find it damn romantic, and touching. 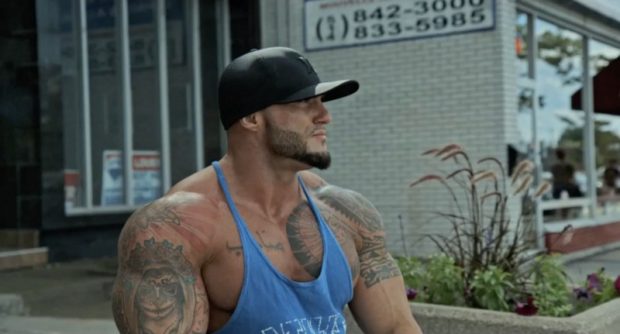 What do you hope that people feel when watching the documentary?

This is my tenth feature. At some point, even though you remain obsessed with the idea of an audience watching your work, you can’t predict or know if they’re as interested or fascinated as I was while I was while doing it. I know that I’m not giving information about the world of bodybuilding. I know the film is not about entertainment, and it’s not a conventional sport documentary. Not knowing what it is was very exciting. I just hope I didn’t make anything cynical, and have stayed away from the freak show that I could have done.

I’m convinced that the passion of these guys is touching. Watching somebody live his or her passion is touching – it’s worth filming it, and making a film about it. Whether that’s bodybuilding, stamp collecting, or dish-washing.

A Skin So Soft is distributed by Breaking Glass Pictures 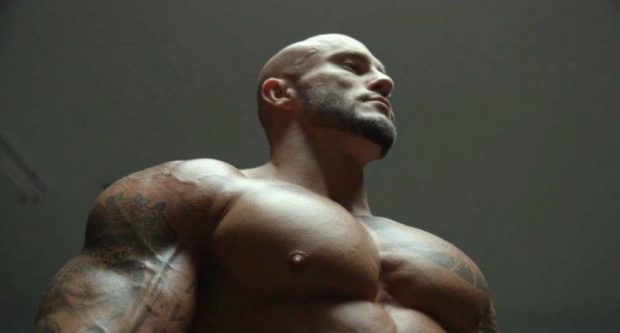 Written by: Gareth Johnson on November 6, 2021.
Tags from the story
A skin so soft, Denis Côté
Facebook Twitter Pinterest
Google + LinkedIn Email
Written By
Gareth Johnson
More from Gareth Johnson
Madrid Pride is one of the biggest LGBTQ Pride celebrations of the...
Read More