DS remains mildly eccentric, somewhat posh and self-consciously French. Its cars subtly transgress the conventions of size and template. The DS 4 drives a wedge into the wafer-thin gap between a tallish hatchback and a lowish crossover. 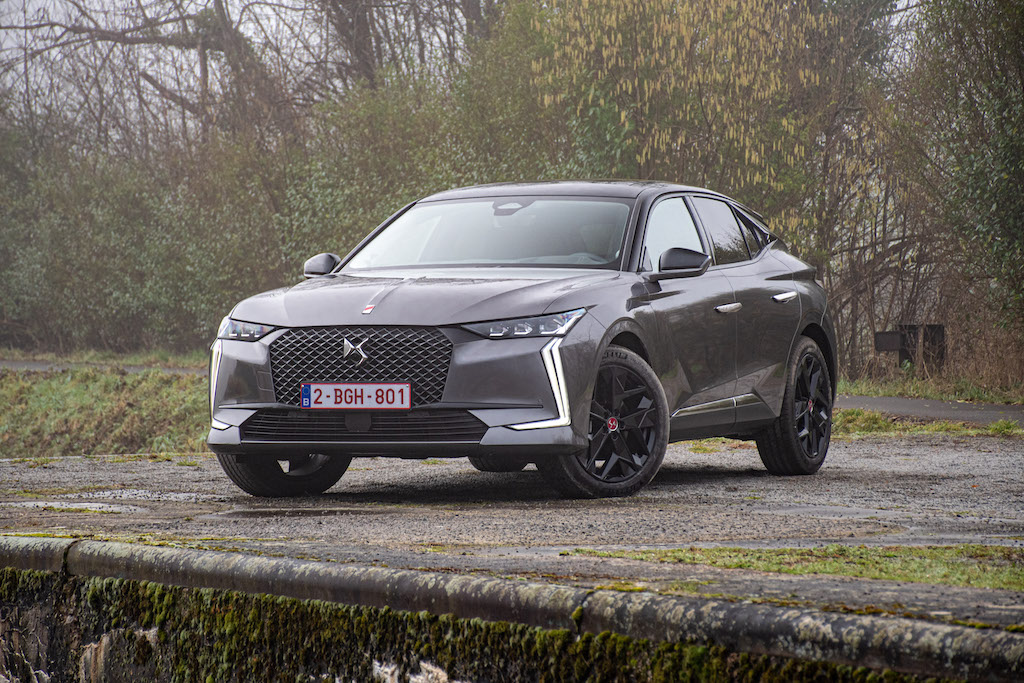 Its mission is to go against the usual premium-hatch suspects: Audi A3, Mercedes A-Class and BMW 1 Series. But the extra height means it tangles against the BMW X2 and Cupra Formentor and Lexus UX as well. 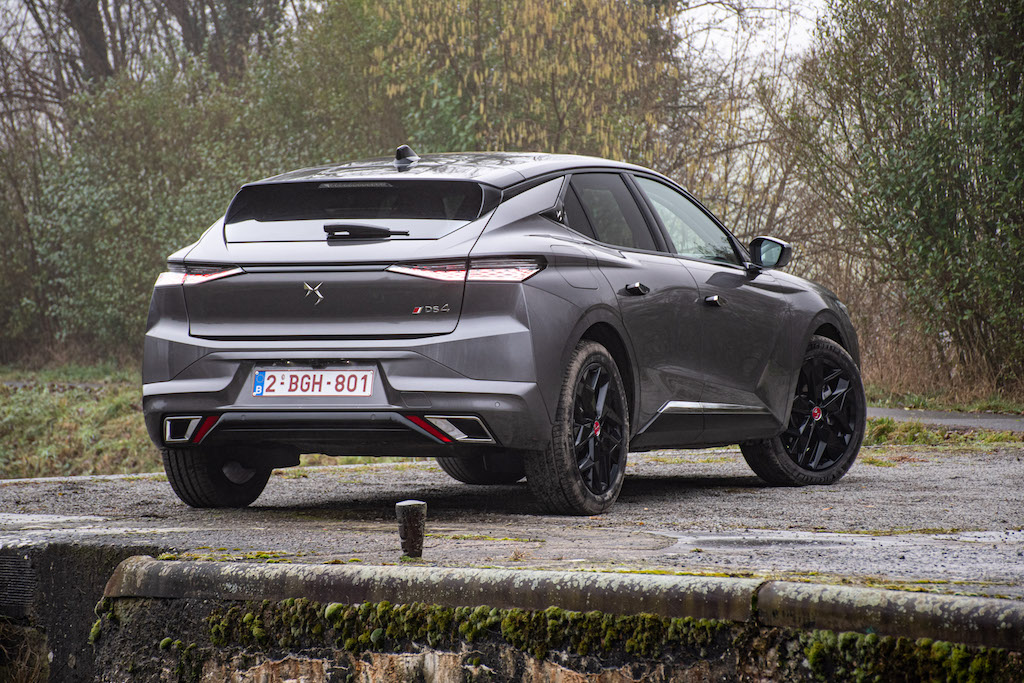 The new DS 4 is a premium hatchback, and choosing one is a bit like when you buy boutique clothing from a cool, offbeat brand instead of going to one of the big chain stores. 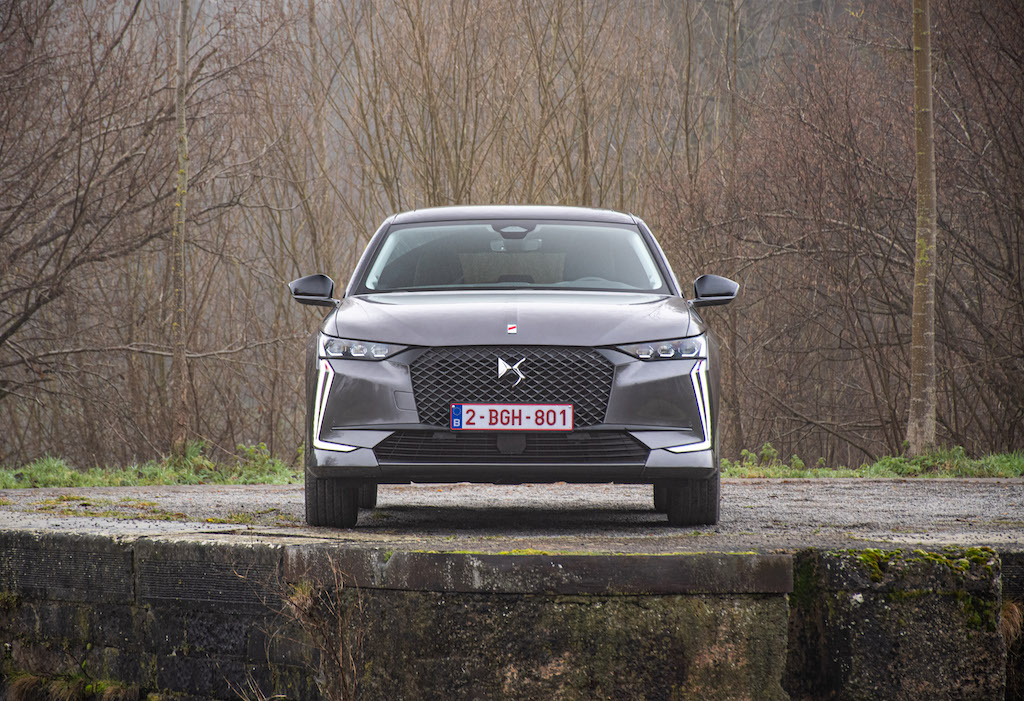 The DS 4 can be had in three distinct flavours: there’s the standard car, which offers a classy look with lashings of chrome and cool light designs, the Premium Line, which ditches chrome for black detailing and sporty Alcantara interior trim, and the Cross, which offers an SUV-like design. 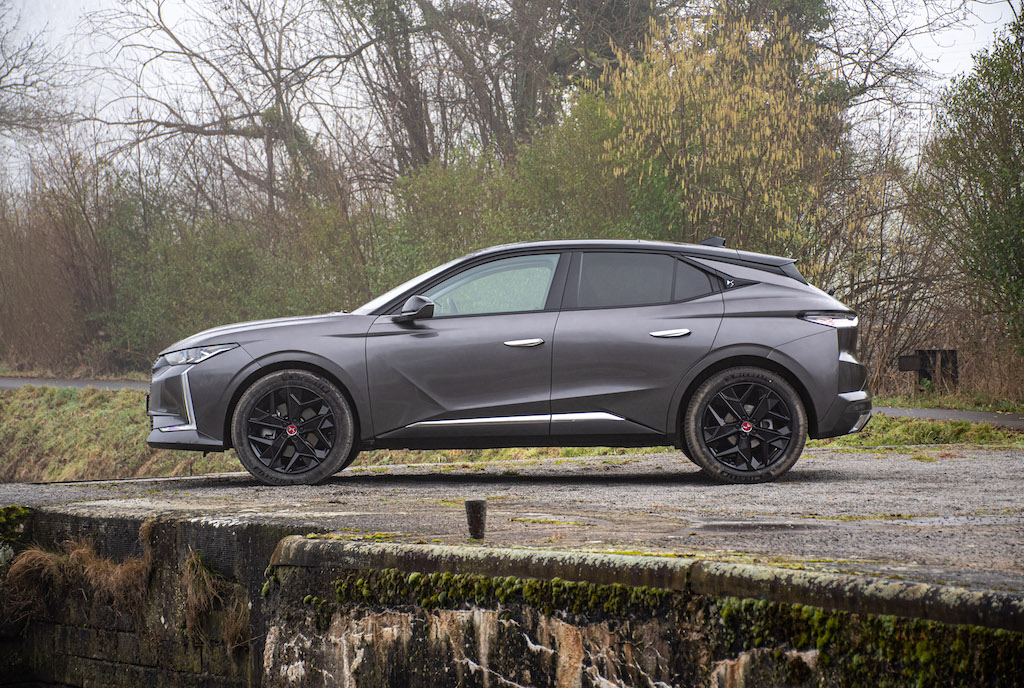 This latest model, though, has an identity all of its own, with distinctive –almost concept car-like – lines and it’s a good-looking thing, mostly because of the proportions. A comparatively short front overhang and low bulkhead bring a strong flat bonnet. Big wheel wells allow up to 20-inch alloys, pushed out flush with the body sides.

The sheetmetal is slashed with multiple diagonal creases. Too busy for some tastes perhaps, but it’s all distinctive and confident. This car sweeps rakishly down, under a two-tone roof. Pop-out door handles and flashy textured LED lighting add to the upmarket look.

It’s also more aerodynamic than your usual crossover, thanks in part to the low roof, a flat floor and narrowish tyres that derive their grip from a large diameter. 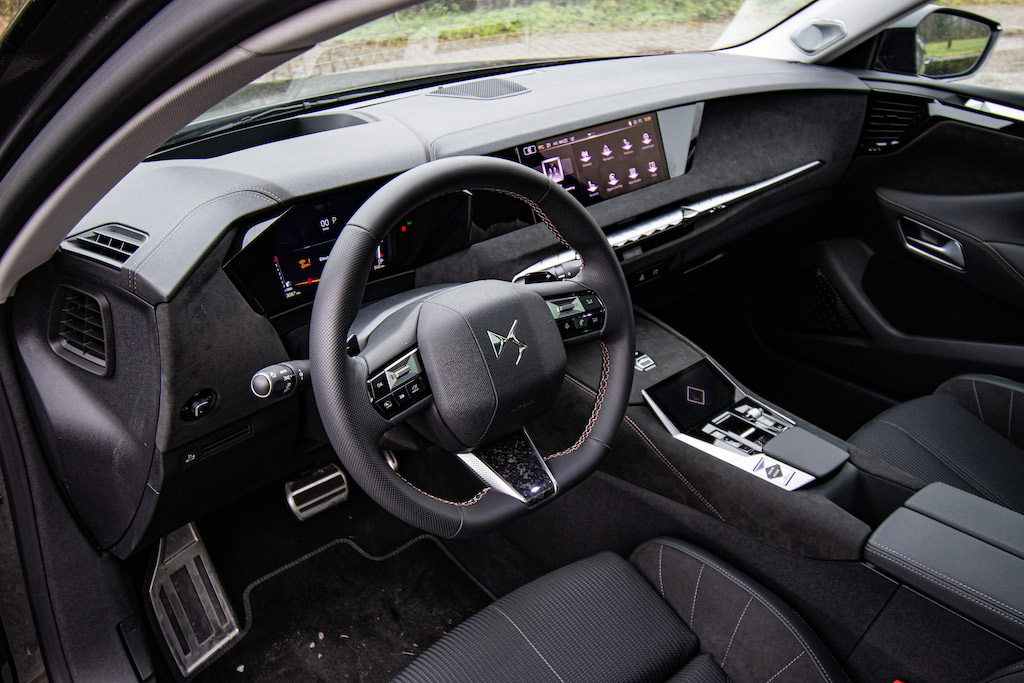 It’s with the interior that the DS 4 really puts on a show. The design is simple yet has more of a sense of occasion than you’ll feel in the equivalent Audi A3 or BMW 1 Series. It’s also very uncluttered, with the few buttons that do exist, such as the window switches on the driver’s door or the physical controls for the air conditioning, blending seamlessly into the design.

It feels solidly put together, especially the soft-touch materials on top of the dashboard and the leather that adorns most of the other surfaces you often touch, including the steering wheel.

You’ll find it easy to get comfortable, thanks to lots of steering wheel and driver’s seat adjustment.

You get a large 10in touchscreen infotainment display that responds quickly to all of your prods and swipes. It’s an impressive system that’s been designed to act like the screen of a smartphone. For example, you can easily personalise menus by simply pressing and holding on the screen then dragging menu icons to where you want them. 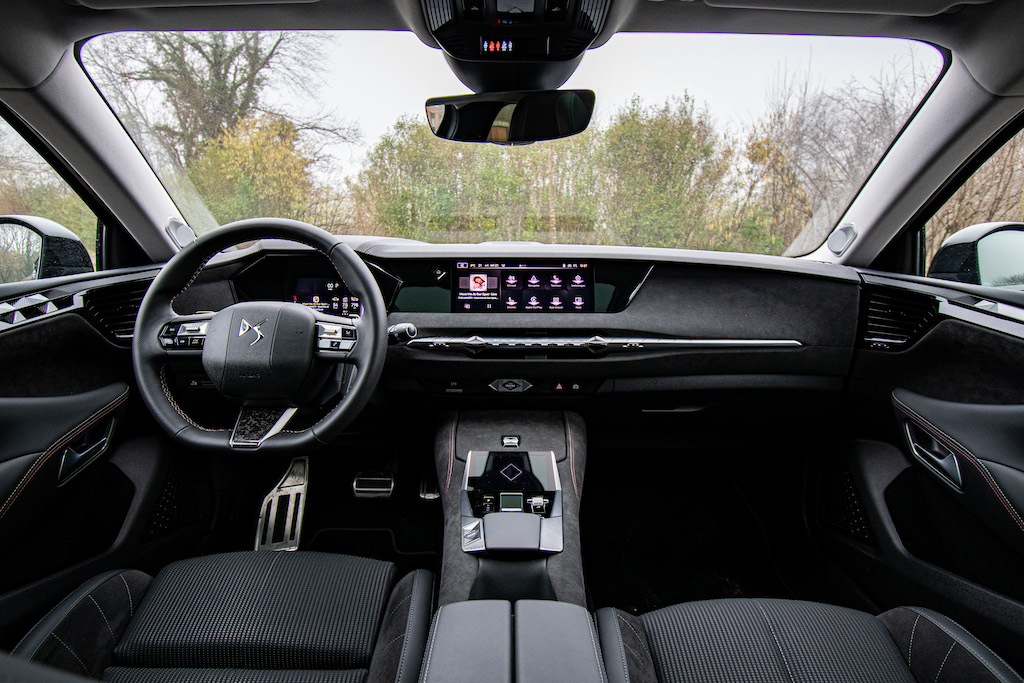 As with many other systems, the DS 4’s infotainment system goes without traditional buttons and dials. However, in an effort to ensure that it’s not too distracting to use on the move, there’s a separate smaller, touchscreen just in front of the armrest.

DAB radio, wireless Apple CarPlay and Android Auto smartphone mirroring and Bluetooth connectivity is standard across the range, but Bastille + and  Performance Line models do without sat-nav .

You’ll have no issues with front visibility, with thin window pillars making it easy to see out at junctions, plus bright LED headlights are standard throughout the range. Rear visibility isn’t quite as good, though, due to large pillars that restrict the view when you look over your shoulder. Fortunately, all versions get rear-parking sensors and a rear-view camera to help with parking manoeuvres.

Despite the minimalist dashboard design, you’ll find plenty of storage spaces including a covered space that holds a pair of cupholders, a USB port and a place for your phone, along with a small recess in front of the armrest for your keys and a deep cubby inside the armrest. The door bins aren’t the largest, but you’ll fit a drink and some other items in there.

Those in the rear will be similarly comfortable; six-footers in either of the outside seats will have sufficient knee room, as well as good space under the front seats for their feet. However, passengers in those seats will find that the optional sunroof brings the same compromised head room in the back as it does in the front. A six-footer sitting in the middle rear seat, meanwhile, will be fine for head room whether there’s a sunroof or not. 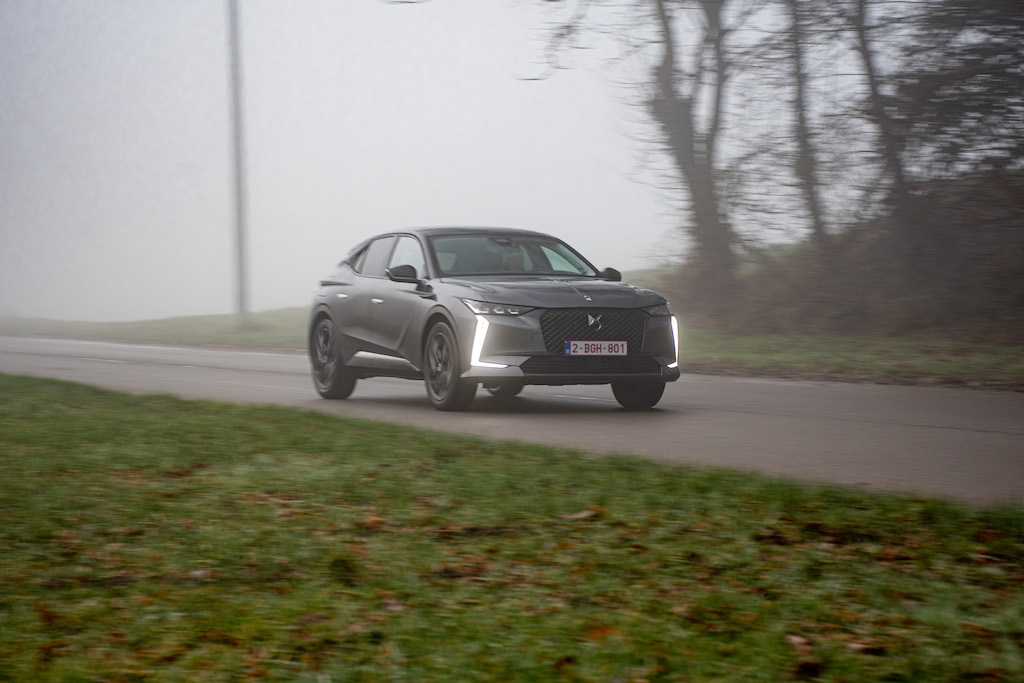 If you’re planning on loading longer items into the boot, all trim levels bar the entry-level Bastille + trim level get a handy ski hatch that allows it to pass through to the middle rear seat. All versions come with 60/40 split rear seat backs, though, so you can extend the boot at the cost of one or two rear seats.

The DS 4 brings all the tech innovation of the DS 7 to this more compact class, and point of fact improves on much of it. Especially the interface and driver-assist systems.

There’s also a 221bhp plug-in hybrid E-Tense 225 that can do shorter journeys on electric power alone, cutting your overall CO2 emissions. Every version comes fitted with an eight-speed automatic gearbox. 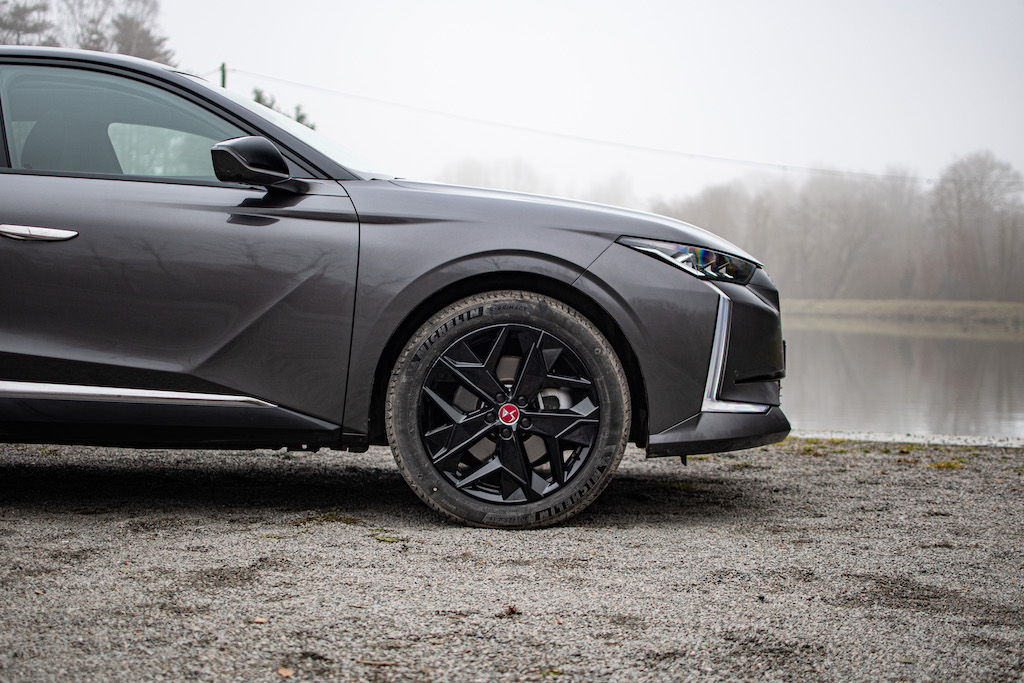 The DS 4 is refined at speed, too, although the trade off is the handling is safe and predictable rather than fun in any way.

Whether or not you actually want a car with such self-conscious styling is a question that comes up with any DS model. But with the 4, we think it’s easier to want than the others. And that styling wraps a properly competitive car.

The DS 4 offers suspension with a road-scanning stereo camera that spots bumps, softening each damper in turn as that wheel hits the perturbation. If you want this technology but don’t want a DS, you have to shell out for a Mercedes S-Class or Rolls-Royce Ghost! 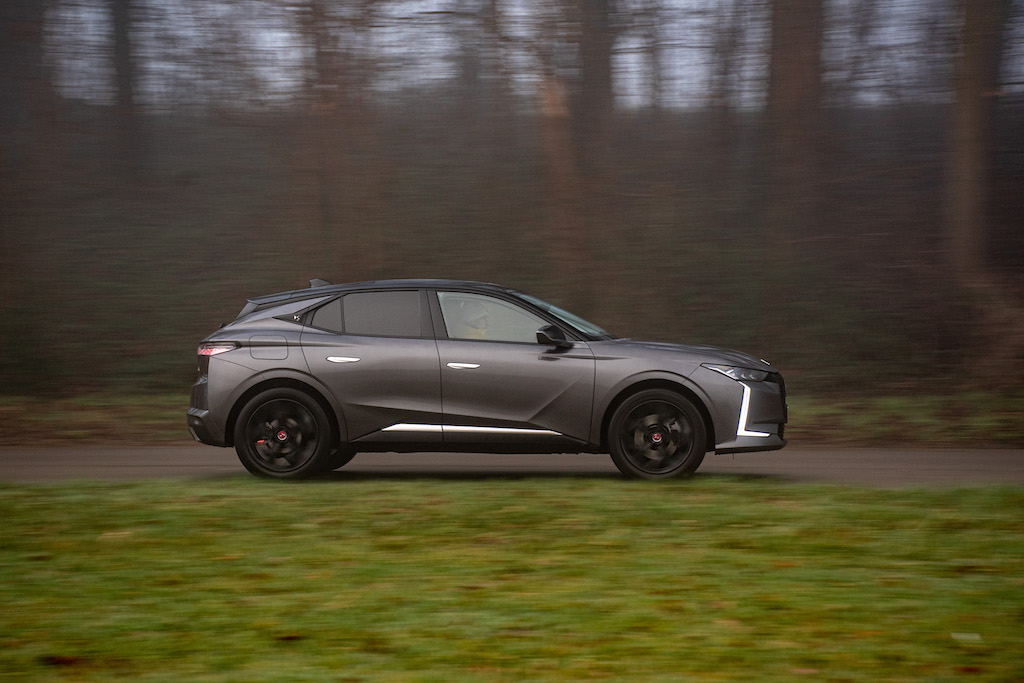 Now the system, called Active Scan, works only in limited circs – you have to be below about 60mph, and obviously it can get confused by puddles and odd lighting conditions. And you have to be in ‘comfort’ drive mode or it just reverts to a conventional adaptive damping setup with normal and sports modes.

Whatever, the DS 4 rides rather beautifully in ‘comfort’. It’s more consistent and fluent than in the DS 7 and 9. Also, the 4’s stiff bodyshell avoids transmitting much in the way of unnerving clonks or tyre noise. 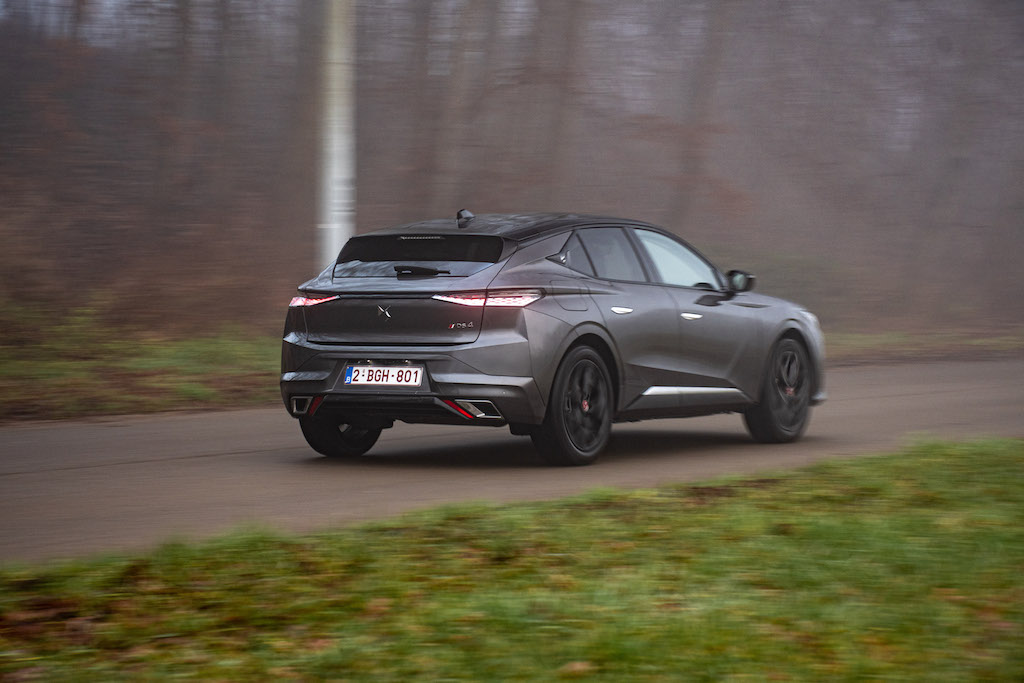 The body of this DS4 is deep and the glass shallow, so it feels cocooning rather than airy. Space, front and back, is what you’d expect in a hatch. This latest model, though, has an identity all of its own, with distinctive –almost concept car-like – lines and an interior that makes a statement that should give it a shot of confidence to take on the established premium alternatives.

Overall, the DS 4 is a very desirable and likeable premium hatchback that doesn’t try to copy the German establishment, instead treading its own path.