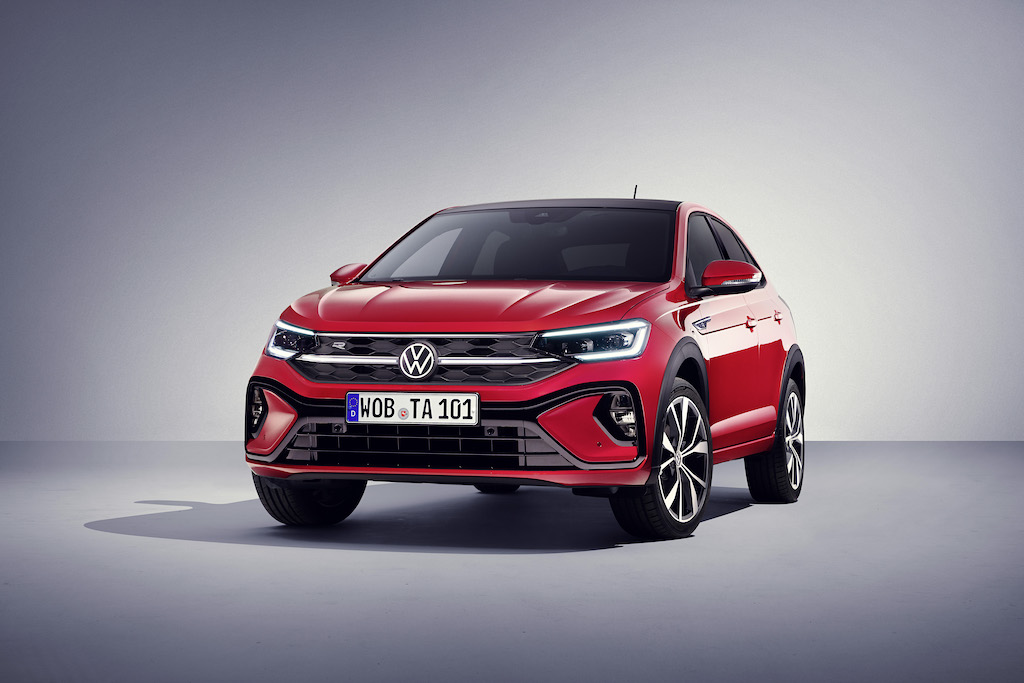 The Volkswagen Taigo is the firm’s latest SUV-style model and is a coupe version of the popular T-Roc. It’s like deciding to go for a shorter haircut but going for the same basic design.

You get the same face as the Polo hatchback alongside some additional trim pieces to make it more aggressive and like a crossover, while there’s now a lightbar connecting the headlights like most newer VW models.  It’s got a sleek side profile, ending with a small spoiler on the roofline. You also get some SUV-style cladding around the wheel arches and additional detailing around the back. 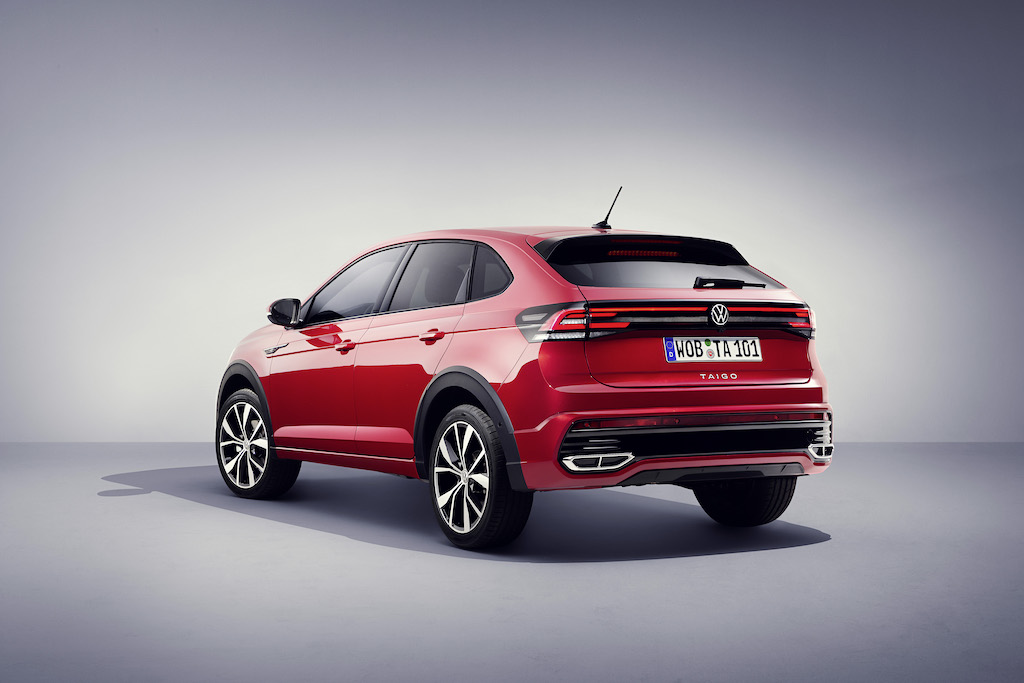 Until recently, coupé SUVs were reserved for people with expensive tastes, but the new Volkswagen Taigo is here to change that. Instead, the Taigo (pronounced ‘tie-go’) aims to have all the style of cars such as the Mercedes GLC Coupé but with more compact measurements.

Its selling point, however, is really its coupe-style image, and you’ll likely have already made your own mind up on the looks. It’s hardly the most eye-catching thing in the sector and the brash full width rear lightbar splits opinion. Still, it’s less polarising than something like a Ford Puma, if easily forgettable. Upper trim levels get chunky black plastic cladding all along the sills and silver roof rails for a bit more of a ‘lifestyle’ look, if that’s what you’re into. 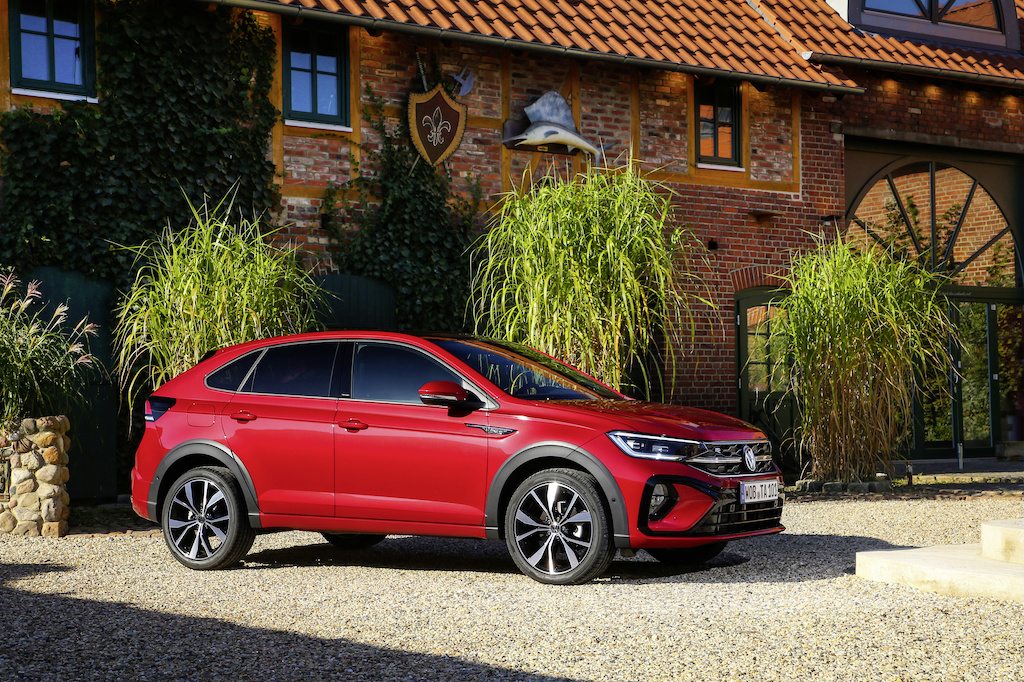 When you climb inside the Volkswagen Taigo, you’ll find it easy to get comfy. The quality of the Taigo’s interior is better than it might seem at first glance, with pleasantly soft materials on top of the dashboard and a satisfying leather steering wheel on all trims. 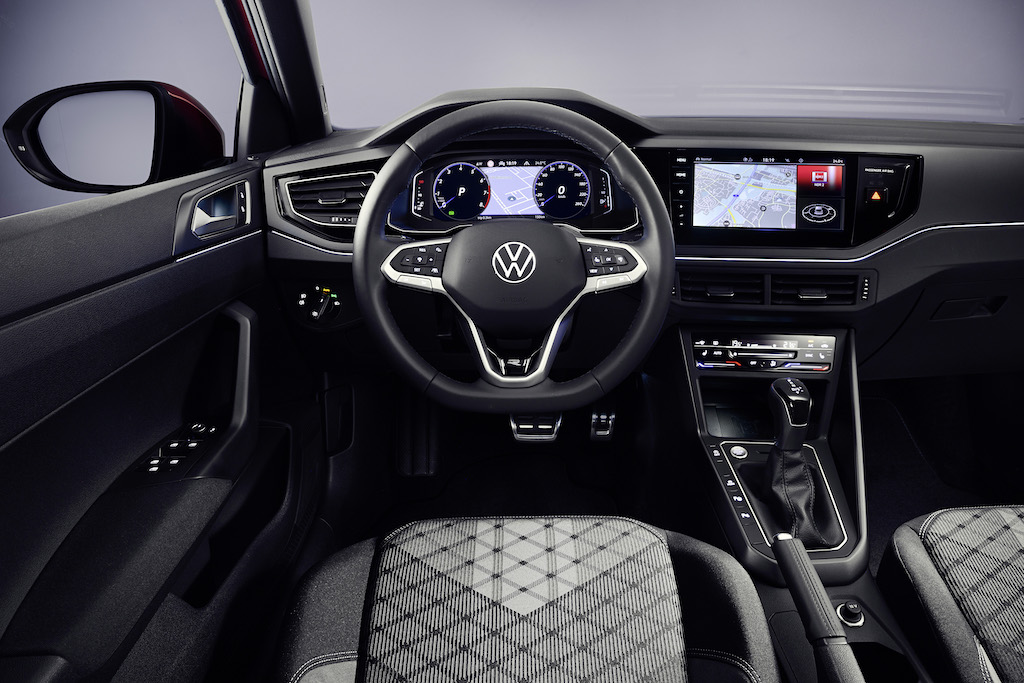 Better news is that the interior is laid out in a sensible way, with all the relevant buttons and knobs stationed exactly where you’d expect, so you’ll quickly feel at home. What’s more, if you stick with entry-level Life trim, you get physical air conditioning controls, which are easier to use on the move than the touch-sensitive ones in higher trim variants.

All versions come with a digital display instead of more traditional analogue dials. The size depends on trim level, with Life getting an 8.0in screen and the two higher trims a 10.3in one. Regardless of which you go for, the display is clear and can show a wide range of information alongside your speedo, including power output, fuel efficiency and even full width map on the larger screen. 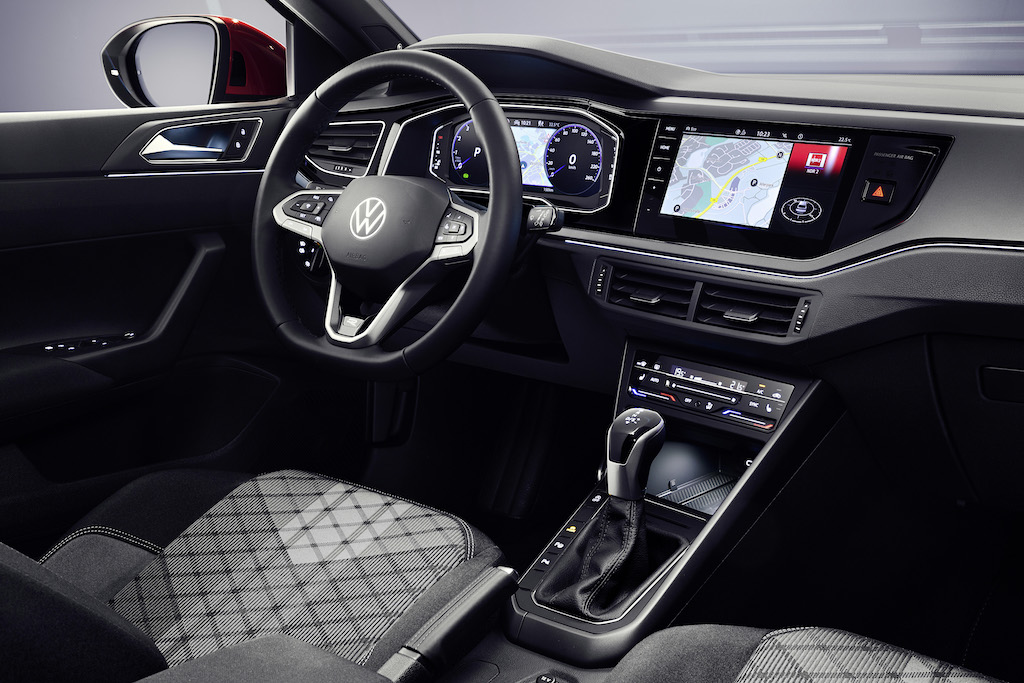 Volkswagen gives you plenty of toys as standard, including DAB radio, and Apple CarPlay and Android Auto smartphone mirroring (so you can use your phone apps on the screen). If you opt for either Style or R-Line trim, you also get built-in sat-nav.

Thanks to the Taigo’s raised seating position and slim front windscreen pillars, visibility out of the front is good and you’ll never struggle to see out at junctions.

The Volkswagen Taigo offers plenty of headroom and seats that slide a good way back for lots of legroom, so even people measuring north of six feet won’t find themselves struggling for space in the front. The width is impressive, and you won’t find you and your front-seat passenger rubbing shoulders.

There’s ample storage space up front, too. The Taigo has a decent-sized glove box, door bins that can swallow a large bottle of water, a deep cubby in the central armrest and a space for your phone in front of the gearstick, which doubles as a wireless charger on all trims.

Typically, cars with coupé SUV styling suffer when it comes to rear headroom. I’m happy to report that the Taigo isn’t one of those cars. In fact, even your tallest friends will be pleasantly surprised by the amount of headroom on offer, which is only marginally less than in the front. Bright LED headlights are standard across the range, so you’ll be able to see well after dark. Style trim upgrades them to clever matrix headlights that allow you to keep full beam on without blinding other drivers. 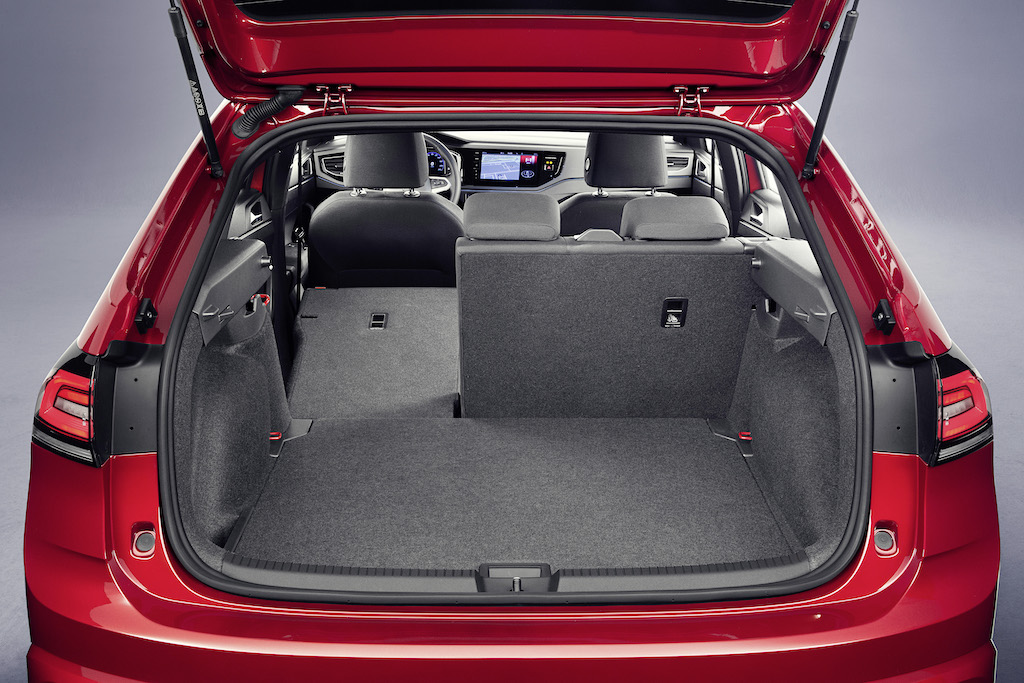 R-Line trim comes with a Driving Profile Selection switch (it’s optional with Style trim), which allows you to swap between four driving modes: Eco, Comfort, Sport and Individual. The modes alter throttle response, the gearbox’s aggressiveness, the weight of the steering, and other settings, but don’t have much of an effect. I’d stick to Comfort mode.

Taigo’s boot gives you 440 litres of space to play with.

The Taigo is petrol-only, with your options being a 1.0-litre turbo three-cylinder with 94bhp or 108bhp, plus a 1.5-litre turbo four-cylinder with 148bhp. You can have manual or auto gearboxes, but front-wheel drive is standard and VW has already ruled out a GTI or R performance variant. 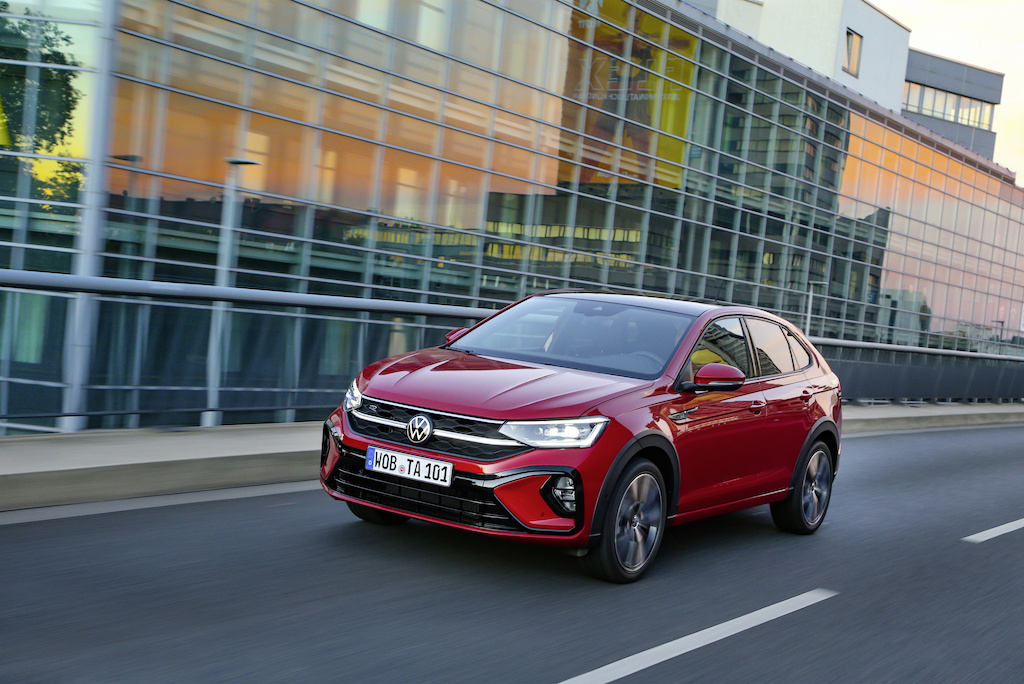 Despite its modest power output, the Volkswagen Taigo’s entry-level 1.0 TSI 95 petrol engine performs adequately enough. It doesn’t need working hard just to get up to speed and it does an admirable job of keeping momentum on uphill stretches of road. You don’t have to frantically change down a gear to keep the engine revving higher, for example.

If your budget allows, the 110 is our choice of engine in the whole line-up. With 108bhp, it responds quickly to your inputs and will get you up to motorway speeds with less effort. The official 0-100km/hm time is 10.4sec. If that doesn’t sound quite fast enough for you or you plan to carry lots of luggage and passengers, the 1.5 TSI 150 is worth considering. As you might expect with 148bhp and a 0-100km/h sprint of 8.3sec. 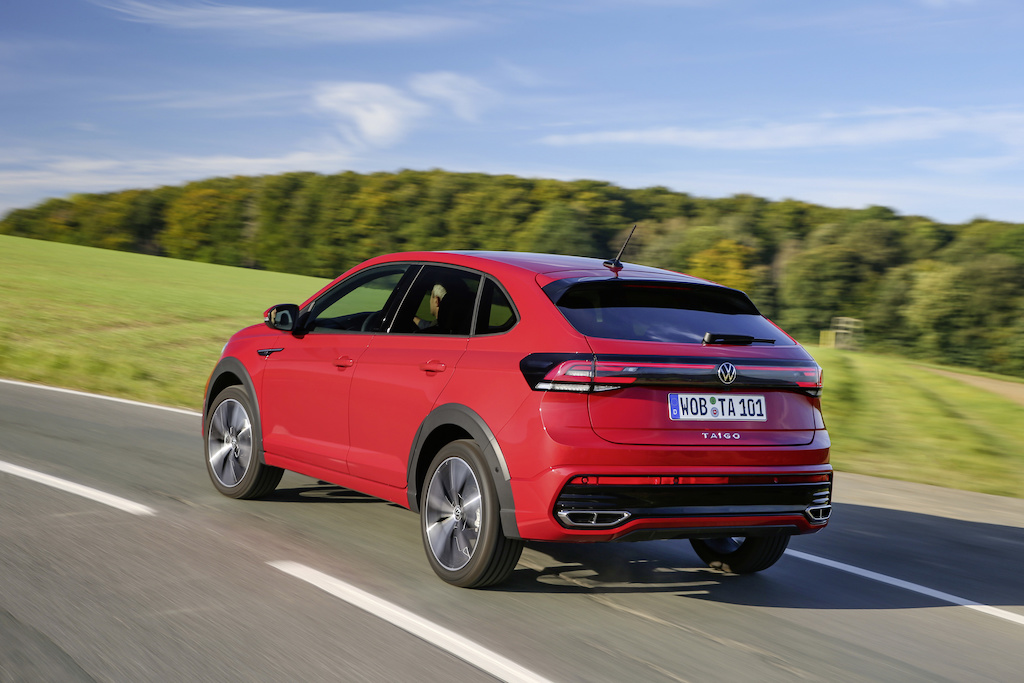 My favourite engine, the 1.0 TSI 110, is quiet enough in normal conditions and only becomes noisy when you work it hard to pick up the pace. Because you don’t have to work the 1.5 TSI 150 as hard, it’s generally quieter.

When you get out on the road, the Taigo feels stable and secure – but if you’re after an exciting and invigorating experience, you may want to look elsewhere. Still, the ride was smooth enough. Handled surprisingly well around corners, too, staying level and composed. The suspension is on the firm side, but it never feels crashy and actually copes with potholes remarkably well, especially on the entry-level 16-inch alloys. The brakes are good too, with decent feel to the pedal. 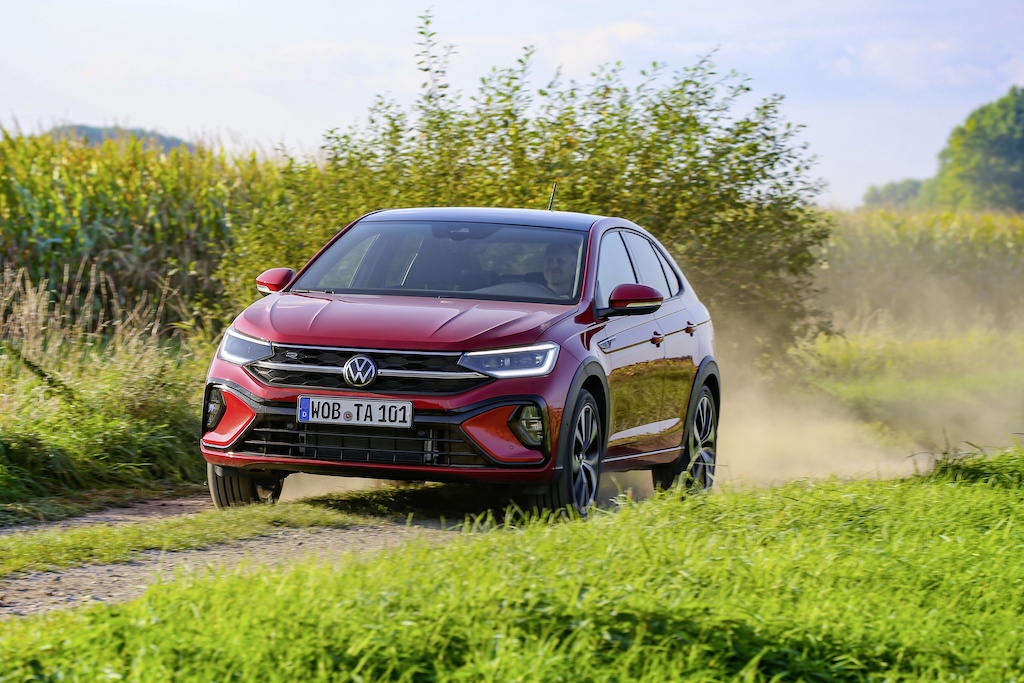 Even though it isn’t the most exciting, the Volkswagen Taigo is a capable compact crossover that is on the more affordable end of the market. Some of the finishes might not be the best, but the overall quality is more than good enough for most.

The Taigo broadens buyers’ choices when it comes to a small SUV, which is a good thing when combined with a solid dynamic experience, strong tech and enough space. Consumers have never had it so good.