Artists like Cristina Iglesias and leading water research organizations discuss the global role of water in the face of climate change and the challenges it poses. 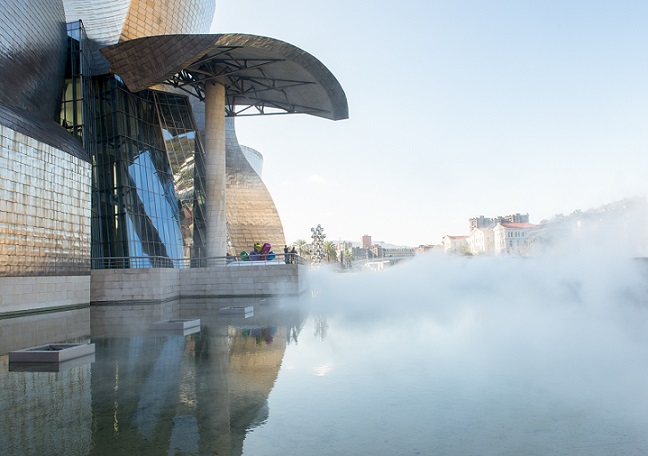 On October 6, the Guggenheim Museum Bilbao will host “Ecologies of Water,” an international symposium to discuss the importance of cooperation between the artistic, scientific, and technologic spheres for the preservation and regeneration of ecosystems.

Focusing particularly on aquatic environments—which are critical for the survival of human beings and other species—the symposium is aimed at promoting interdisciplinary dialogue and collaboration, as well as identifying transnational working areas, with the help of European experts including Amalia Zepou, social innovator and former Deputy Mayor of Athens; Mark IJzerman, researcher and artist at V2_Lab for the Unstable Media, Rotterdam; Paolo Naldini, Director of Cittadellarte-Fondazione Pistoletto (Biella, Italy); and Valery de Smedt, Head of Research at LUCA School of Arts in Brussels.

In addition, Basque artist Cristina Iglesias will introduce a documentary of her latest project, Hondalea (Marine Abyss)—one of the most ambitious and relevant interventions in the modern history of art in the Basque Country and a fine example of collaboration between artists, scientists, and technologists.

The symposium has been organized in association with the European Commission’s STARTS4Water initiative, to be represented in Bilbao by Ralph Dum, PhD in Physics, researcher and founding member of STARTS4Water, which promotes collaborations between artists, leading industry and technology actors, as well as scientific research centers.

“Ecologies of Water” underscores the Guggenheim Museum Bilbao’s interest in sustainability, one of the main commitments in its 2021–2023 Strategic Plan. The symposium is part of the Sustainability Plan released in April, a ground-breaking initiative for a museum, aimed at minimizing the environmental impact of its activities by implementing energy-wise solutions and non-polluting processes, and by promoting eco-efficiency.

The symposium will be the first of a series of activities to be held in October on the occasion of the 25th Anniversary of the Guggenheim Museum Bilbao. Like all the activities held before and the ones that are being organized for the upcoming months, this international event is consistent with the values underlying the Anniversary celebration, as captured in its slogan: “Art Inspires the Future.”

“Ecologies of Water” will welcome attendees interested in sustainability, climate change, and its challenges, as well as students and professionals working in the fields of research and promotion of sustainable futures. The event will be hosted by Juan Ignacio Vidarte, Director General of the Guggenheim Museum Bilbao, and Manuel Cirauqui, curator of the Guggenheim Museum Bilbao.

Admission: Free. Tickets avaible at the Admissions desk and website