Skoda has been quietly producing some high quality cars in many segments of the market over recent years but Skoda had never built an electric car from the ground up before. So, in theory, the Enyaq could have been an unmitigated disaster. Except the modern car industry doesn’t really work like that – and the Volkswagen Group definitely doesn’t. Bear that in mind as you read this review of Skoda’s five-seat electric SUV. 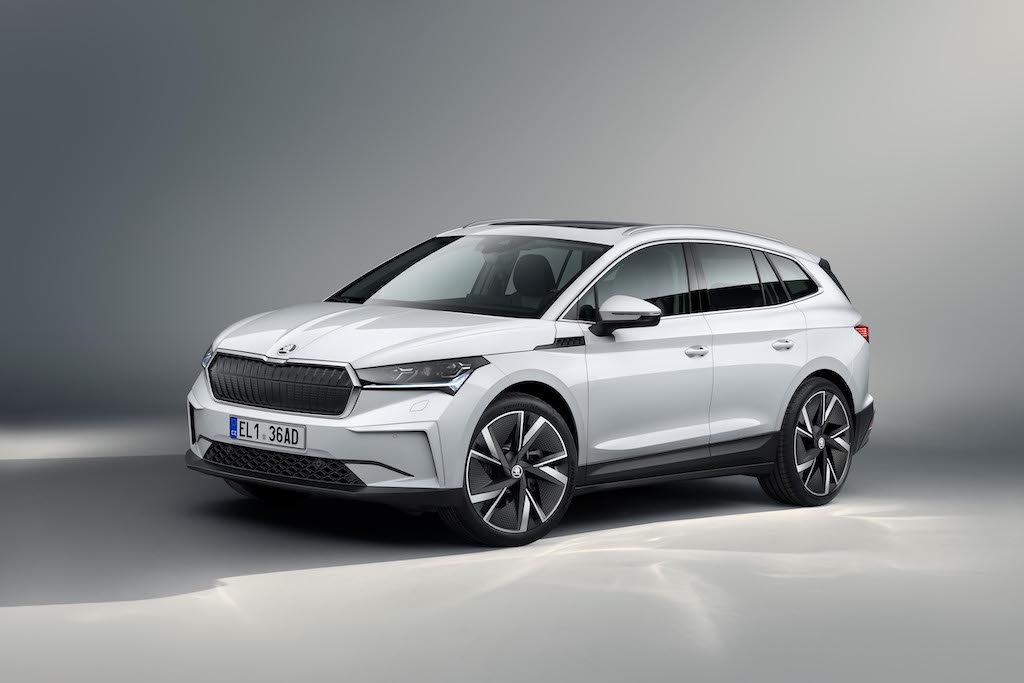 But It’s also a Skoda, so the crisp but quiet conservative design, roomy cabin and “Simply Clever” ice scrapers and umbrellas were expected.

The Enyaq iV is equivalent to the Volkswagen ID.4 – it’s based on the same platform and uses the same powertrain and technologies, just like the Audi Q4 e-tron. 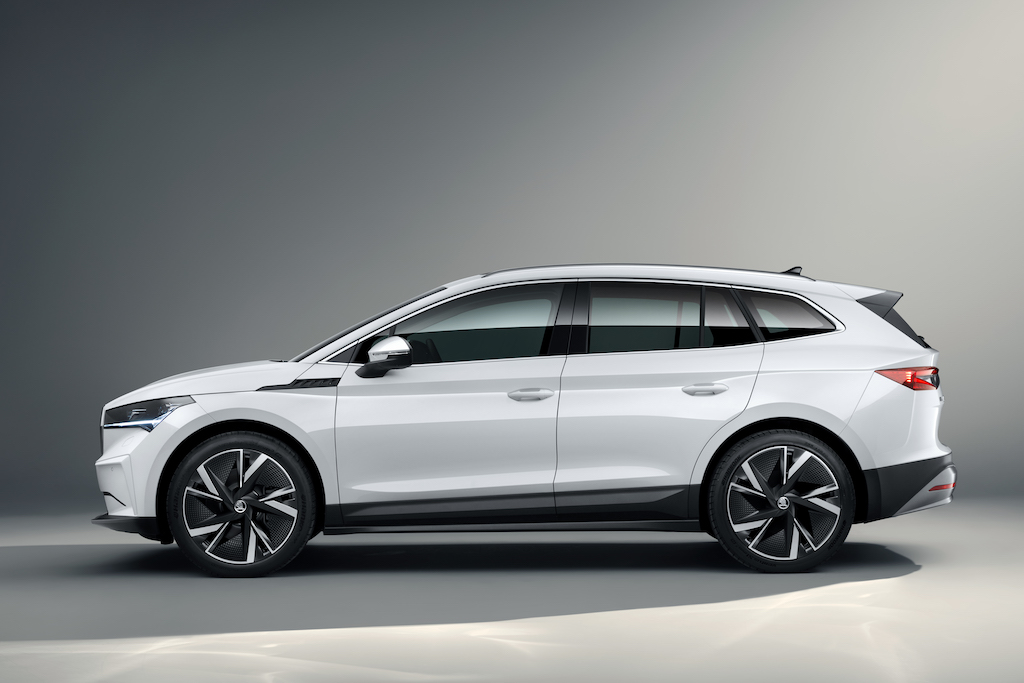 The Enyaq is actually longer than the ID.4 (but shorter than Skoda’s own Kodiaq,, so it’s got a bigger boot. Over 100 litres more with all the seats folded flat, which is not to be sniffed at. 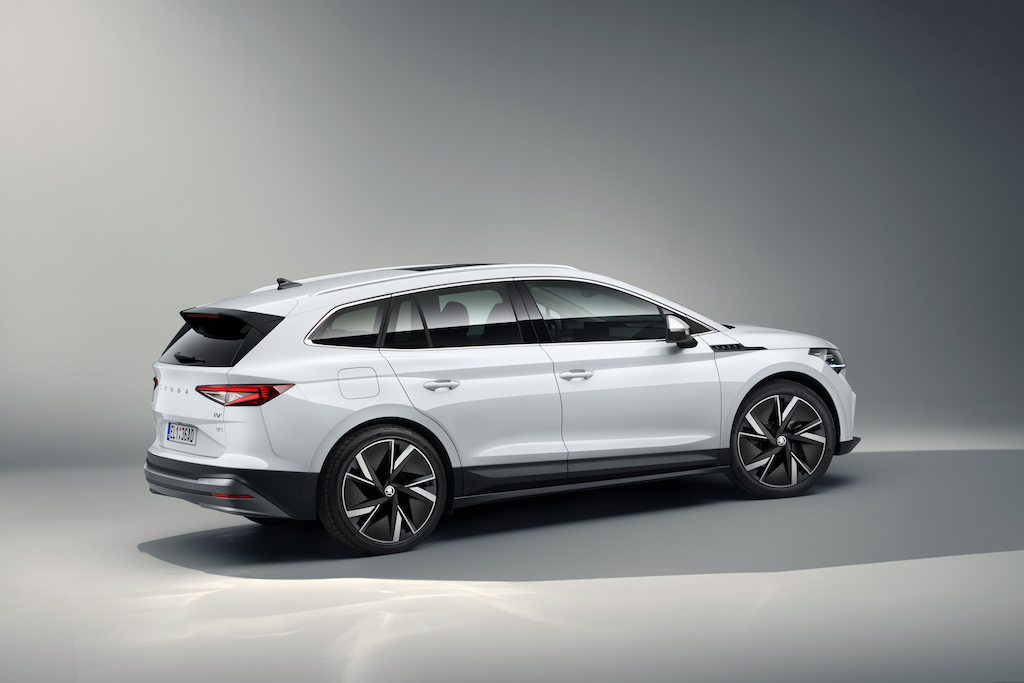 The cabin might well be the car’s best bit! Your first impressions are that this is a welcoming, luxurious and tastefully finished interior. The EcoSuite model is leather-lined, soft-touch and packed with equipment, whereas the Sportline is finished in an appealing combination of black leather and alcantara. 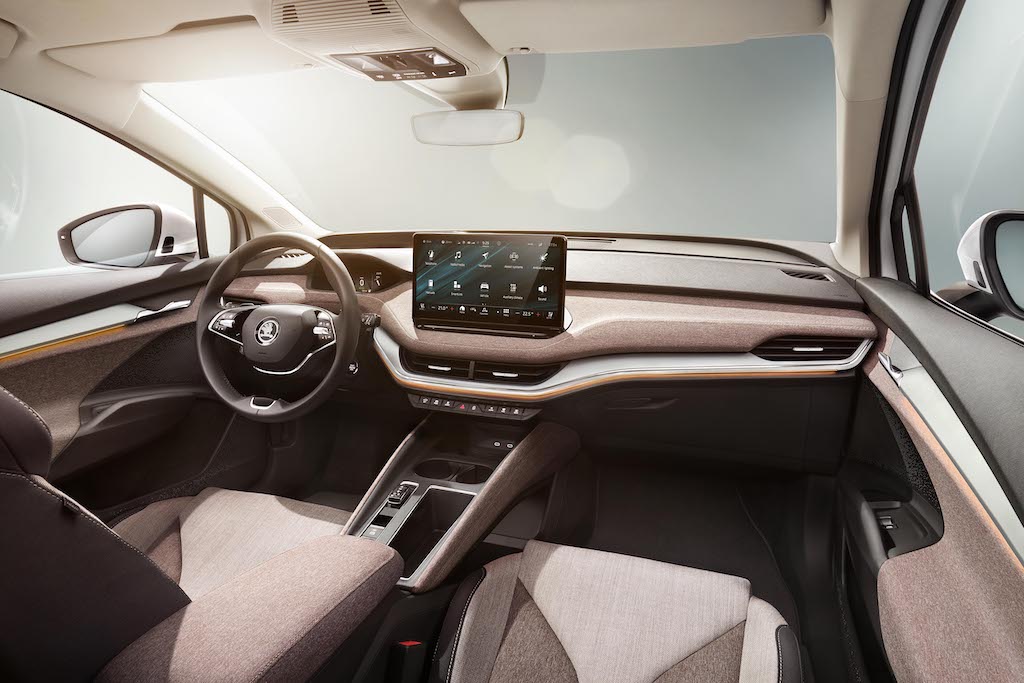 Skoda regulars will relate to the controls and user interface for the infotainment set-up. There are very few physical buttons, with most of the car’s functions operated through an enormous 13.0-inch touchscreen infotainment display.

There’s a large (13-inch) central touchscreen which provides a big rear-view camera. If you want to adjust the heating and ventilation, there’s no button on the touchscreen to do this, but one of the few buttons under the touchscreen is for climate. If you want to quickly change the heating and ventilation settings, such as to adjust the fan speed, this can be a challenge because although the climate button is a physical switch, all controls thereafter are on the touchscreen. The Enyaq also wants to take you to ‘smart AC’ controls; if you want ‘old fashioned’ controls, then ‘classic AC’ is another button that you’ll need to press.

The satnav tends to show you a diagram of previous locations, which isn’t generally that much use, and you have to press a ‘map’ button to view a map.

There’s also a small yet clear digital instrument display and Skoda’s virtual assistant, Laura, not to mention wireless Apple CarPlay and Android Auto. There’s also smartphone app connectivity that allows you to control a number of the car’s key items from the comfort of your own home, such as when to charge or the preconditioning the climate control. A very slick new head-up display package is available, projecting sat-nav instructions and adaptive cruise control onscreen in a natural way. 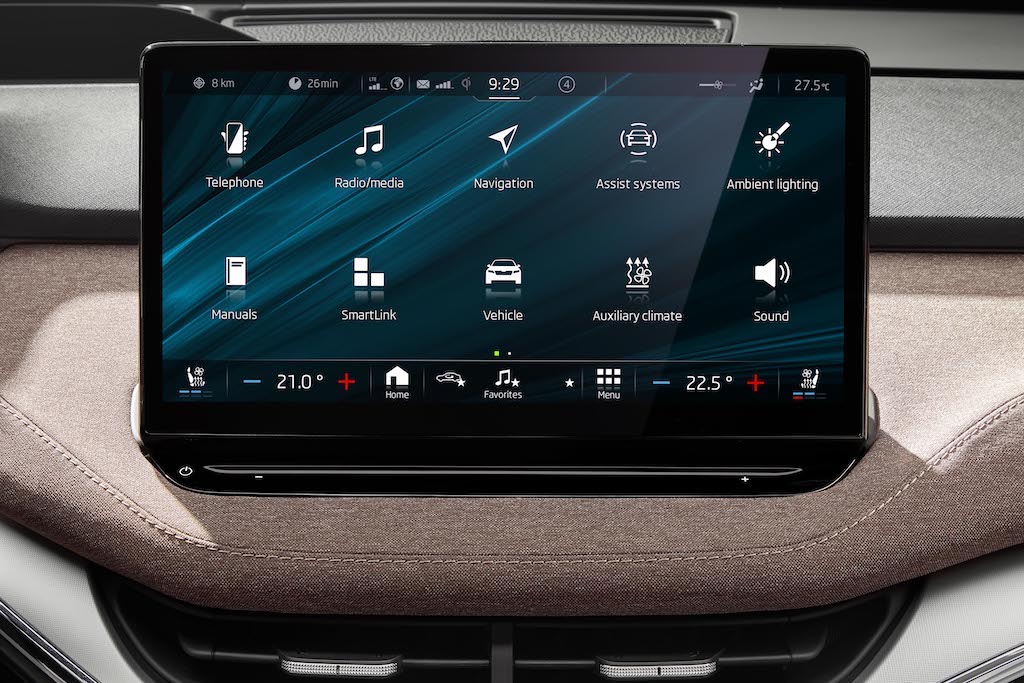 The Enyaq’s interior is much less annoying than the ID.4’s, chiefly because it has fewer of those infuriating touch-sensitive buttons and sliders. For example, the steering wheel has a smattering of normal buttons and a clickwheel for volume. They’re far easier to use than the VW’s touchpads, and there’s significantly less risk of accidentally muting the radio with your palm whenever you turn left.

Otherwise, it stays conventional inside and very practical. The driving position is spot on and the visibility is good. The back seats are very spacious, with as much leg- and headroom as a Kodiaq, while the boot has a capacity of 585 litres.

All the seats are comfortable and there’s plenty of room for people and things. The flat floor means it’s easy to sit three-abreast in the back. Passenger accommodation is also very good. There’s lots of room in the back seats and what I found to be an excellent driving position, helped by having plenty of reach adjustment on the steering wheel.

Clever Skoda-y touches include an umbrella secreted in the driver’s door and an ice scraper hidden in the tailgate. 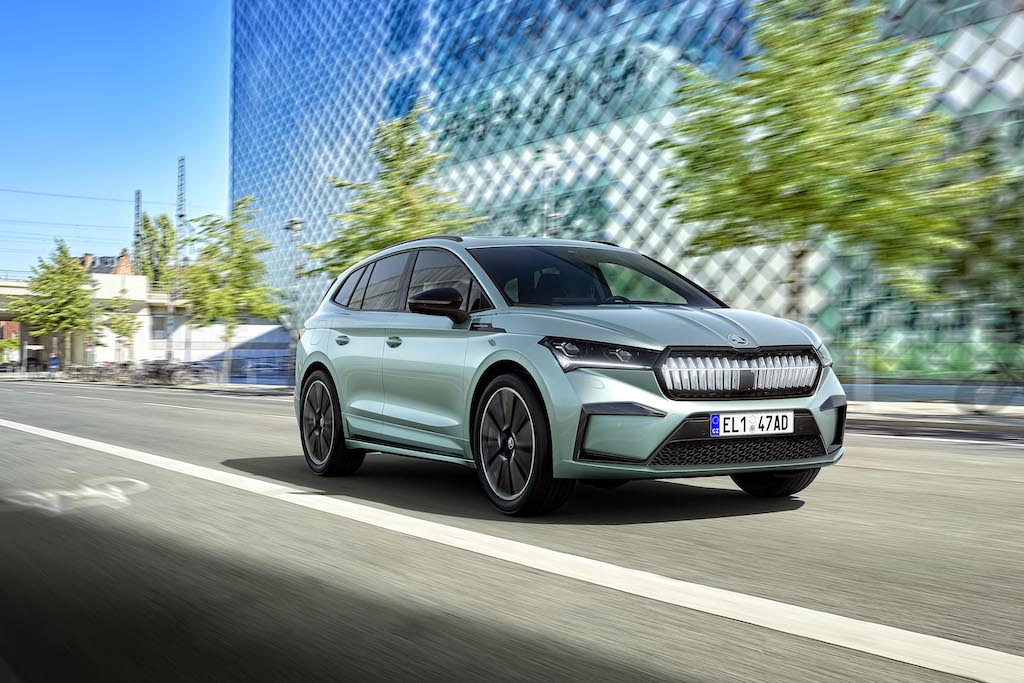 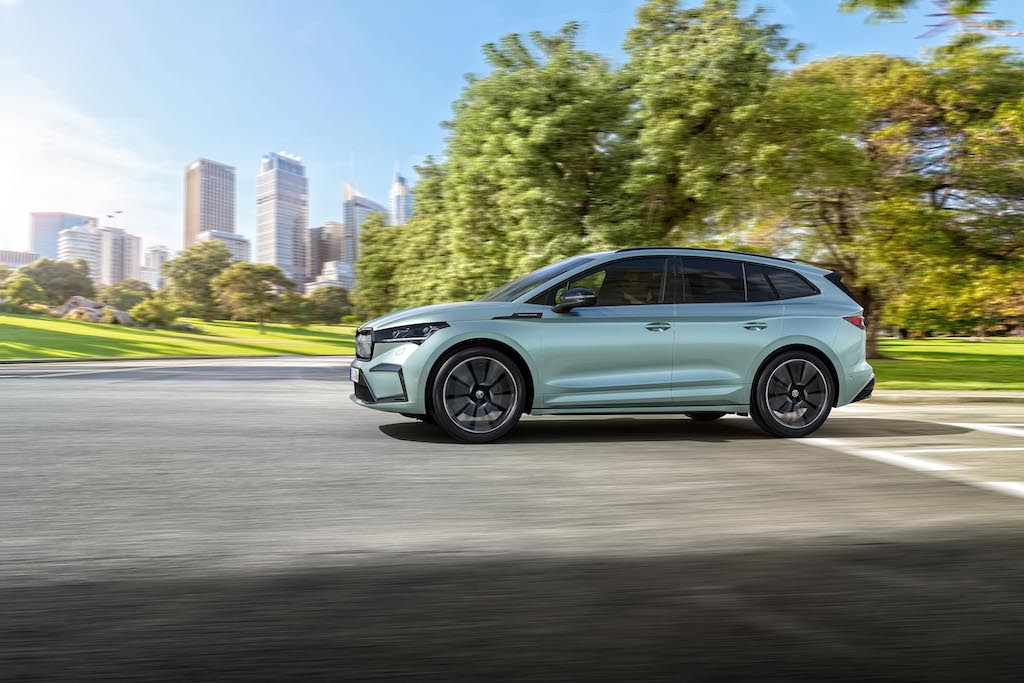 Even though you’ll be charging at home most of the time (Skoda claims a full charge takes 9hrs 30mins for the iV 60 or 13hrs for the iV 80 on a normal 7kW wallbox), it’s worth noting that the max charging rates top out at 120 and 125kW for the two cars. The iV 60 will take an 80 per cent charge in around 35 minutes, while the bigger battery in the iV 80 will accept the same in 38 minutes or so. 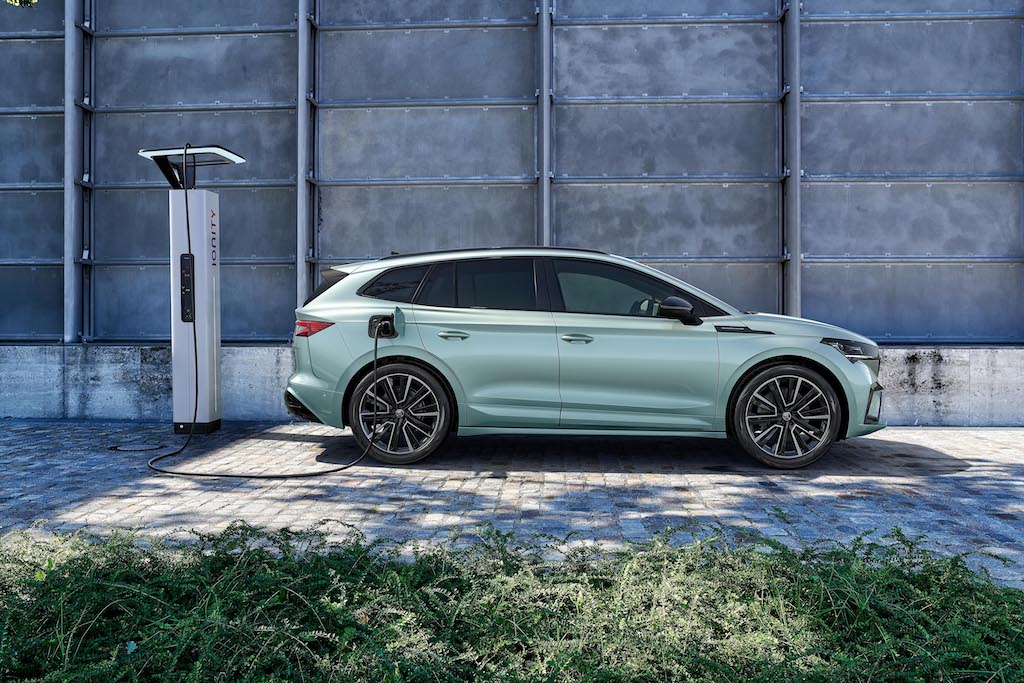 The Enyaq iV is an electric car so all the normal electric car qualities are present, ie. it has responsive acceleration and it’s quiet and refined. Because it’s an electric car, at 2,107kg, it weighs more than an equivalent petrol car. However, it’s still very good to drive, with rewarding rear-wheel drive handling and well-judged traction control. And despite the large wheels, the ride quality is comfortable. 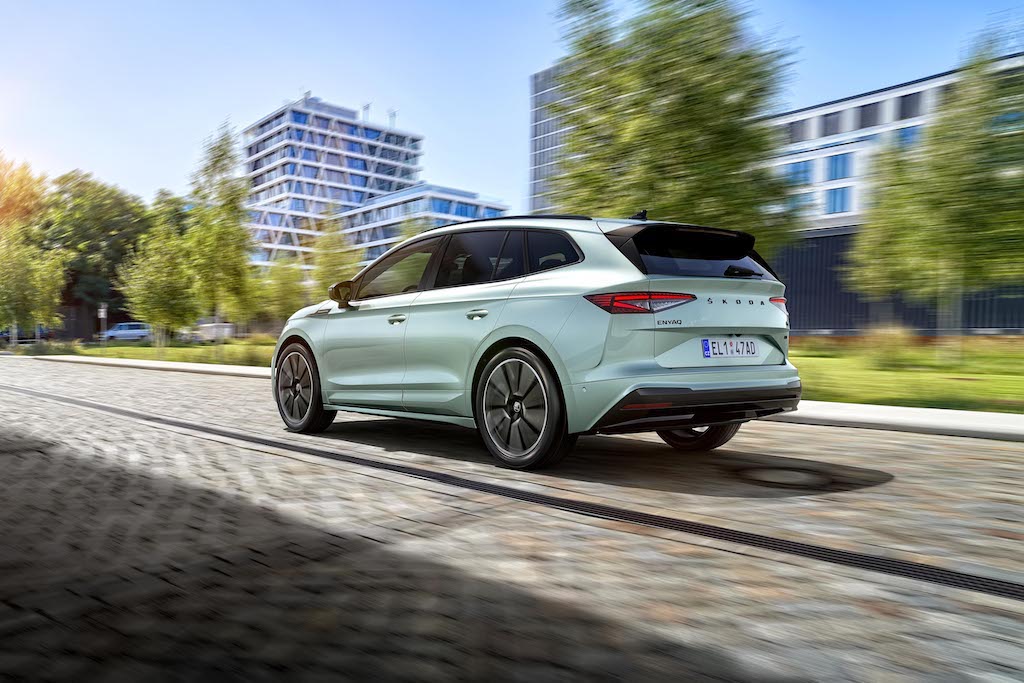 The gear selector is a small button, with the options of D, B or R, but, unusually, no Park – instead you have to use the handbrake.

There are drive modes of Eco, Normal, Sport and Individual. You have to select these via the touchscreen, and once you’ve done this, they stay on the screen, and you have to press the touchscreen again to get rid of the drive mode choices. If you select Sport, there’s nothing in the instrument display – which is very small and doesn’t have much information – to say that you’re in Sport, it just says D.

Don’t worry about the Start button. Just hop in, put your foot on the brake pedal, pop it into D (or B) and you’re away. And it takes precisely no getting used to – the accelerator and brake pedals are well calibrated for smooth driving  and the steering is feel-less but nicely judged as far as weight and precision goes.

It’s important to note here that on the whole the Enyaq is a very relaxing car to drive. 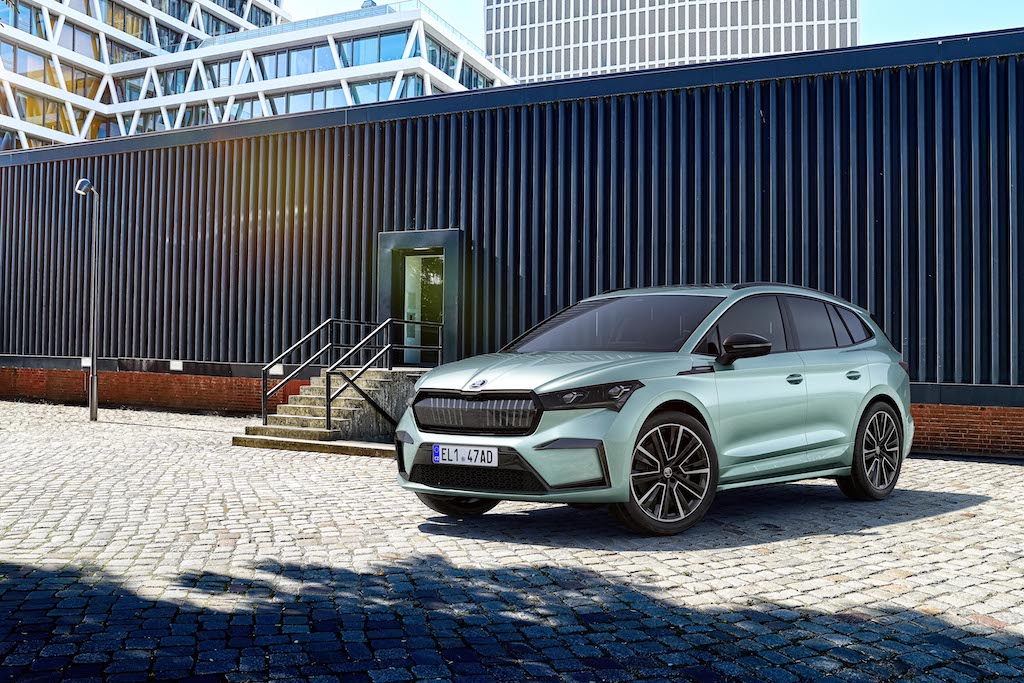 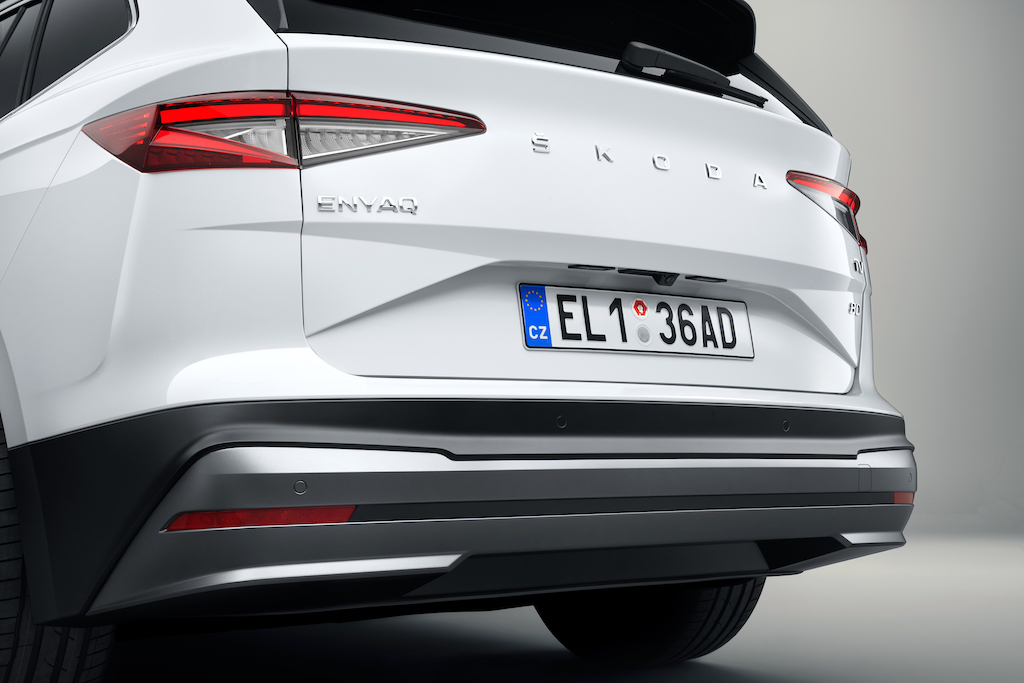 The Enyaq is a generously proportioned crossover that in time will span a variety of battery sizes and motor outputs. The Enyaq edges the ID.4 on several fronts for example. It drives just as well as its cousin, has a less annoying, more practical interior and is cheaper to buy. Best try one before you commit to buying the other, but first, click through the following tabs to read more on the Enyaq… It’s hard not to be impressed with its all-round competence, with all the comfort, space and long-distance cruising ability that this car offer. The Enyaq is also friendlier and more luxurious than lot of her competitors.

As an SUV, it’s hit the ground running – seemingly at the intersection of two dominant market trends: the rise of the electric car and the public’s insatiable appetite for SUVs, crossovers and jacked-up soft-roaders.