To understand the EQE lineup, we would need to look back at the release of the EQS last year. The EQA is a medium-sized electric sedan, and helps bring the big Mercedes-EQ electric plan into focus. At the top of the tree, the EQS is the S-Class of Mercedes electric cars: big, plush and sleek. The EQA and EQB are simply GLA and GLB crossovers stuffed with batteries. Spot the strategy? Mercedes’ less expensive EVs are simply internal-combustion cars with engines swapped for cells and motors, because that’s cheaper to do. But the EQS, EQE and upcoming SUV versions of both get their own platform, optimised to take advantage of battery packaging. Available along its bigger brother the EQS, the new model comes in five variants; the EQE 300, 350+ and the twin-motor EQE 500, are positioned alongside the EQE 43 and EQE 53, which are both AMG variants. 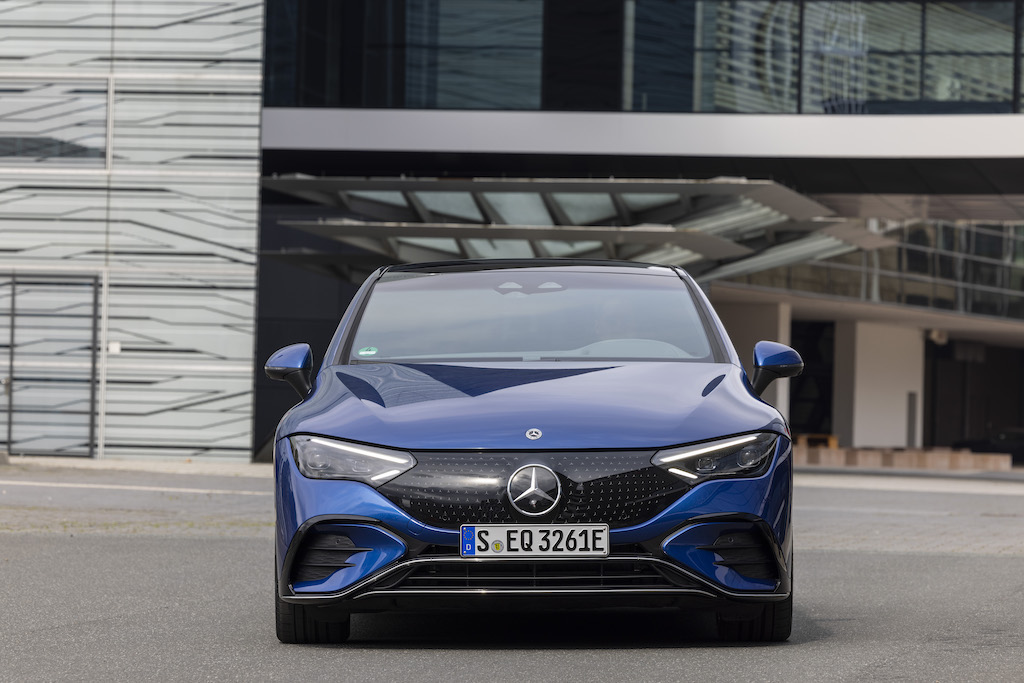 Looking at its design, the downsized EQS offers a design nature of trying to minimise its air resistance. It’s teardrop-shape is combined with door handles that sit flush inside the slippery bodywork, smooth body panels and special wheel designs, which help the drag coefficient of the vehicle. The overall dynamics of the design can be enhanced using the AMG-line appearance package, which adds some details making the car stand out more. 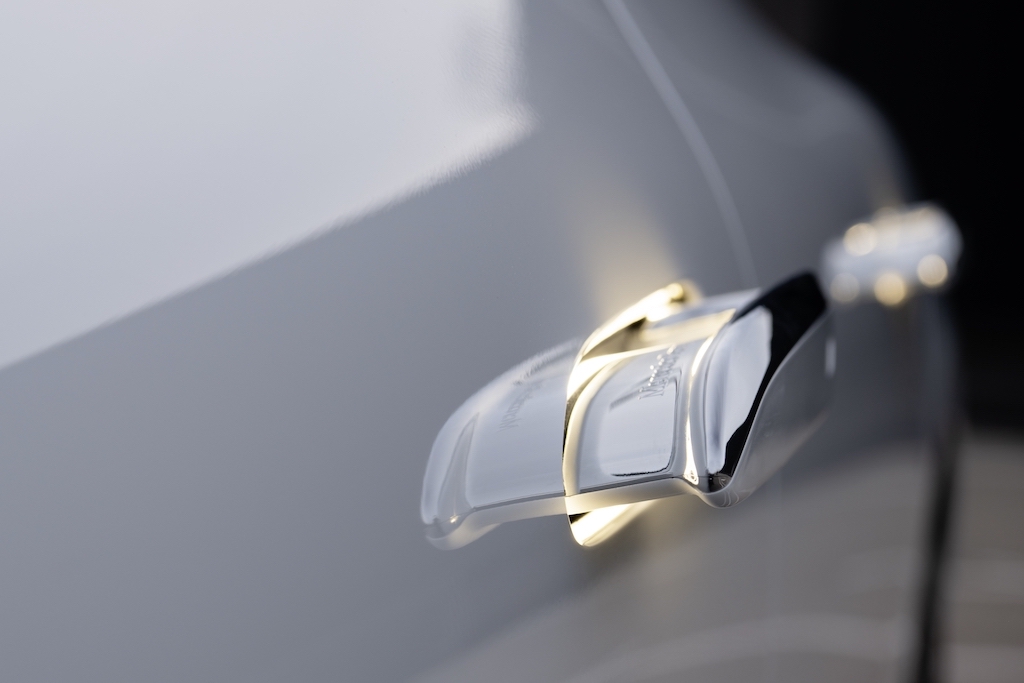 Please don’t get me wrong, the EQE isn’t a beauty that is able to leave you marvelled by its exterior brilliance. On the contrary, the shorter and smaller footprint (Wheelbase is 90 mm shorter than the EQS), makes the EQE less attractive from the outside than its EQS brother. Aerodynamics were clearly the aim here, not creating a visually pleasing package. 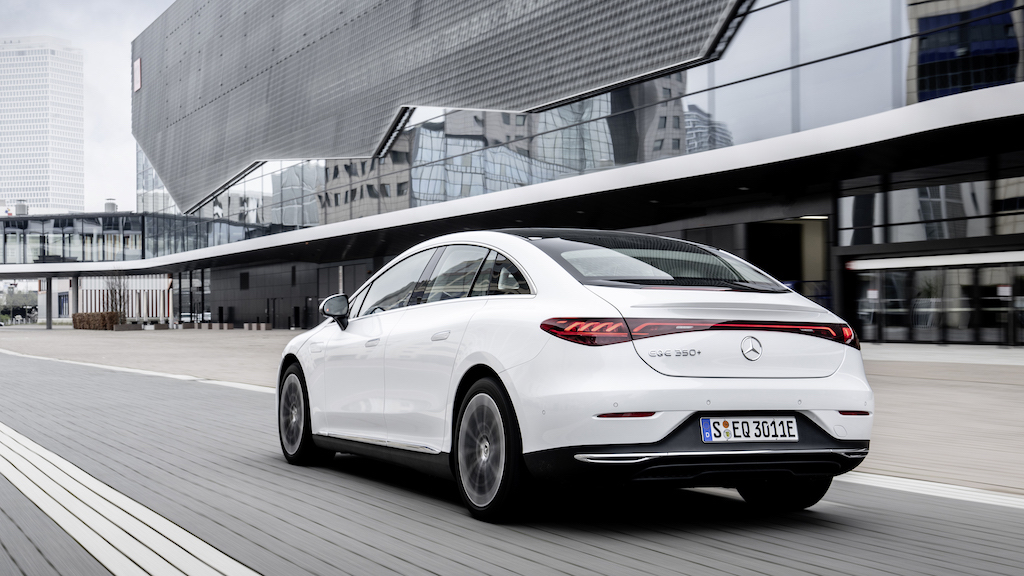 The interior is much more appealing, with a tasteful design, the build quality you expect of Mercedes, adequate space, and choice materials—mostly Even the simplest, least expensive EQE is pretty special. That’s partly down to the high levels of standard-fit tech, but is also a lot to do with the superb cabin design

It’s roomy, front and rear, without having the sort of surplus space you might associate with a lapdance limo. The seats are excellent, with plenty of adjustment. Personally I don’t need to upgrade to pews fitted with complicated massage functions. And it’s quiet – not just from the absence of a combustion engine, but because everything works smoothly, and any external brouhaha is dampened down to a distant rumour. The rear window is quite small, restricting your view out of the back.Air quality gets special attention with a HEPA filter in the HVAC system, an exterior air quality monitor can advise when to close the windows and sunroof, and a subtle background fragrance can waft through the vents from a cartridge in the glove box. 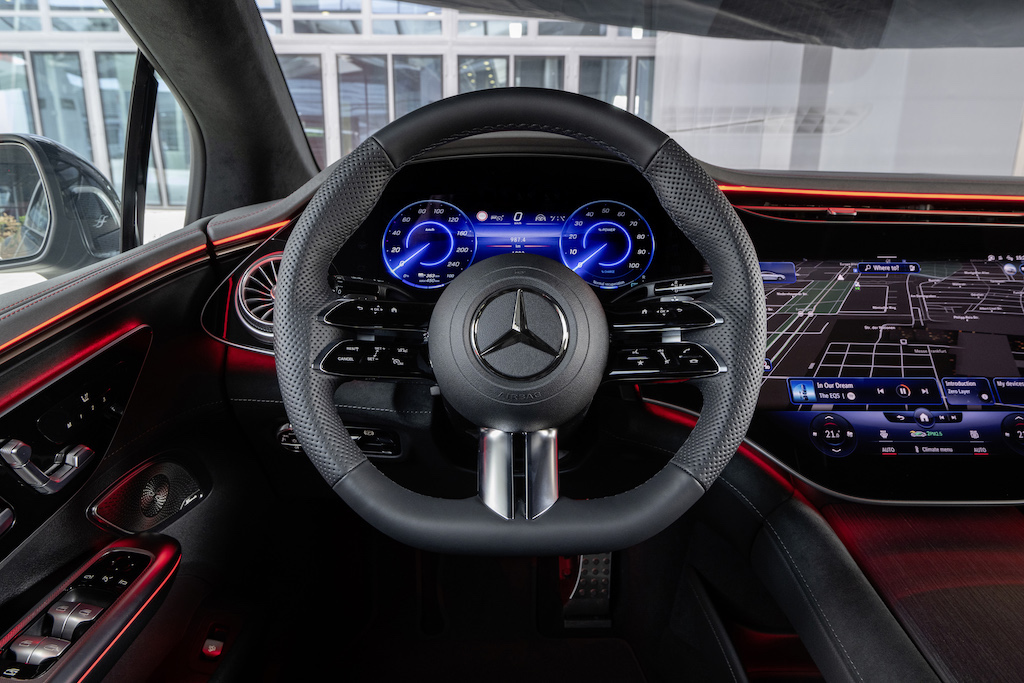 The EQE gets Mercedes’ new infotainment software MBUX, which is a huge step up from the OS in the AMG GT (RIP) and even the EQB crossover. It runs on an 8-core processor with 24 GB of RAM, making it even more powerful than a Sony Playstation 5. You’d never guess though, as the interface was at times slow to respond, and didn’t always load navigation directions on the first try. At least the system has wireless Apple CarPlay and Android Auto, 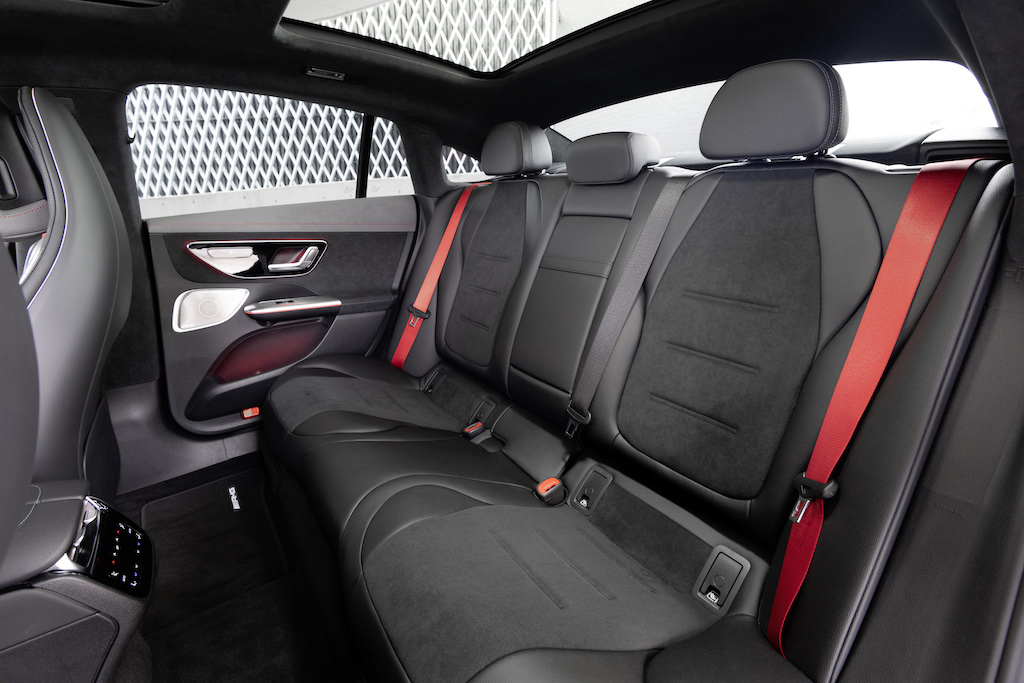 Oh, and while we’re talking about practicality – at least we were until we got sidetracked – it’s probably worth mentioning that boot space is 430 litres. That’s compared to the 540 litres you’ll find in a contemporary E-Class.

There’s a prodigious amount of horsepower on tap that would overwhelm a traditional rear-wheel-drive powertrain, so the AMG engineers equipped the AMG EQE with AMG Performance 4MATIC+ variable all-wheel-drive that continuously distributes drive torque between the front and rear axles based on the driving situation. (Mercedes-AMG notes that the all-electric system delivers a much faster response time – torque is monitored 160 times per second – compared to a combustion system.)

The EQE’s straight-line performance isn’t Tesla-fast.  Officially, the 0_100km/h sprint takes 6.4 seconds and the Mercedes is more than quick enough for pretty much any day-to-day situation. 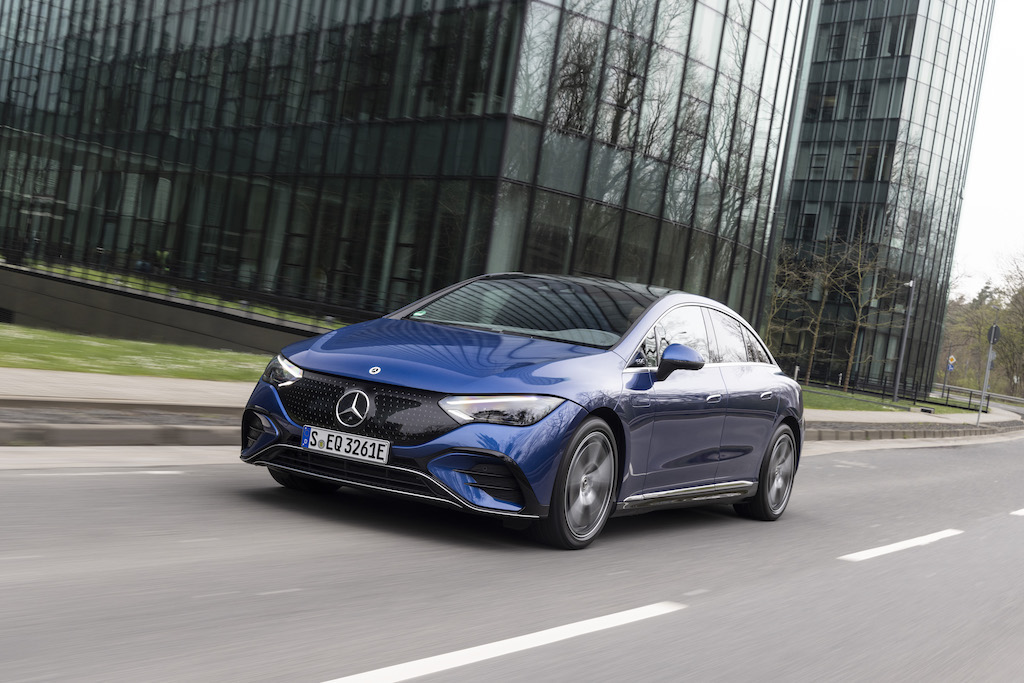 With traditional fuel-burning cars, I have come to understand there’s a hierarchy. A C-Class won’t be quite as isolated and refined as an E-Class, which is a fine business express but not as opulent or as cosseting as an S-Class.

EVs are blurring those lines. They’re all silent. They’re all swift and seamless. So the divisions between different classes become trickier to justify

The EQE is closer to what you know from a “conventional” car but the ride comfort is lovely, something very special indeed. It imperiously irons out bumps, creases and even puddles. There are no jarring thuds as the air suspension gets caught out by an expansion joint or a pothole, as it often has been in other Mercedes. It simply turns the imperfect outside world into a putting green. What’s more, it feels on first impression like the car’s body control is superior to the slightly boat-y EQS, and you’ve a sense the wheels weigh a whole heap less. 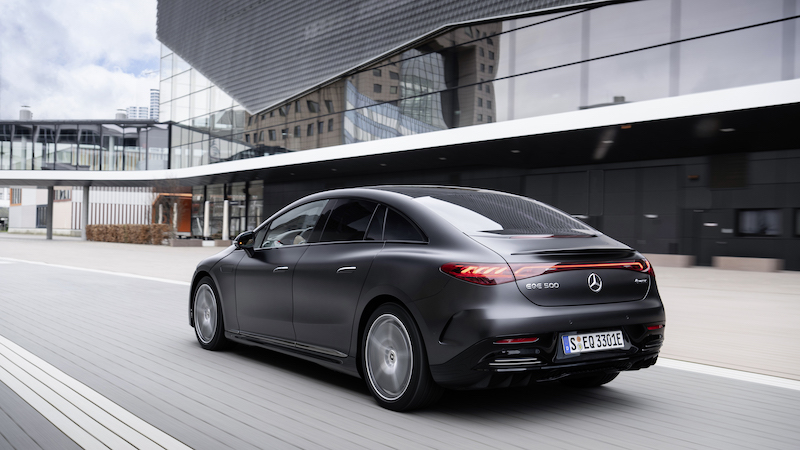 On bumpy roads I had probably prefer slightly smaller wheels and more tyre, but the Airmatic suspension certainly seems worth having. It’s deeply impressive. No EV rides this compliantly. It’s a dynamite USP.

Hushed, supple road manners are backed up with well-weighted steering and the usual on-demand performance.

EQE can accept charge at a maximum rate of 170kW. At a suitable rapid charger it’ll take on 240 km of range in 15 minutes. On your domestic supply, Mercedes quotes a full charge takes at least eight hours.From my experience, with a mix of town and motorway driving and all the tech and aircon on, I’ll likely see above 480 of real-world range too.

Switching between the different drives modes – Eco, Comfort, Sport, Individual – gives more or less lively response to the accelerator. But the bigger change to the driving experience comes from using the + and – paddles behind the steering wheel to adjust the level of energy recuperation when you lift off the accelerator. At one extreme, there’s no braking effect – you coast on. At the other extreme, it feels like you’re stabbing at the brakes. The middle setting works much better. 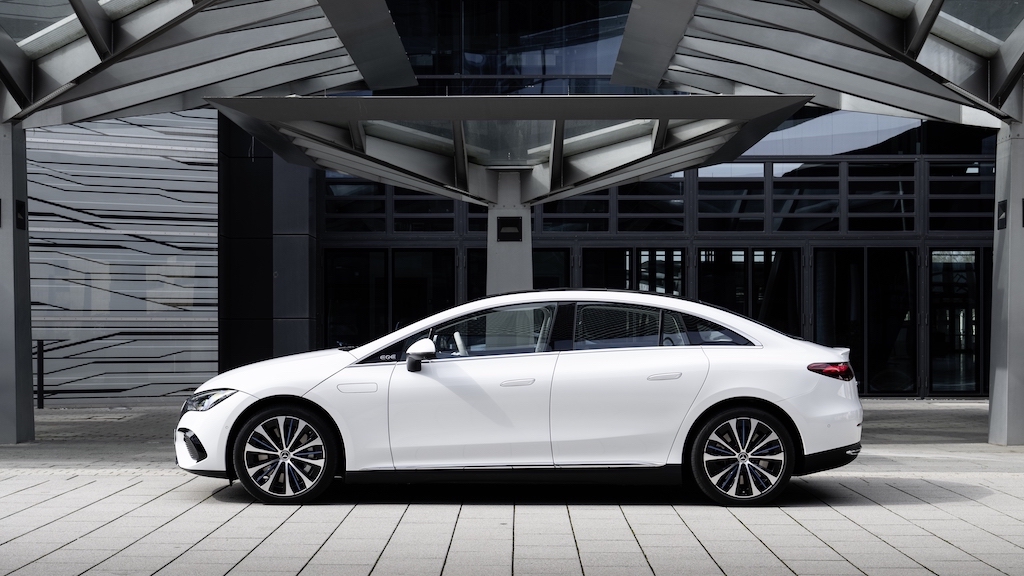 The EQE is swift and silent in the more sedate driving modes (e.g., COMFORT and INDIVIDUAL, if configured as such). Power is unlimited and instantaneous, which takes much of the stress out of driving. The five-passenger sedan devours highway and city miles in a calm matter, allowing its occupants to enjoy the comfortable cabin or the audio system.

There’s also a setting that adapts to the circumstances. If, for instance, you’ve approached a bend at an unwise speed, the car will apply a heavy dose of recuperative braking when you finally ease off the gas. Or on a series of downhill bends, it will subtly help out without being explicitly instructed to. 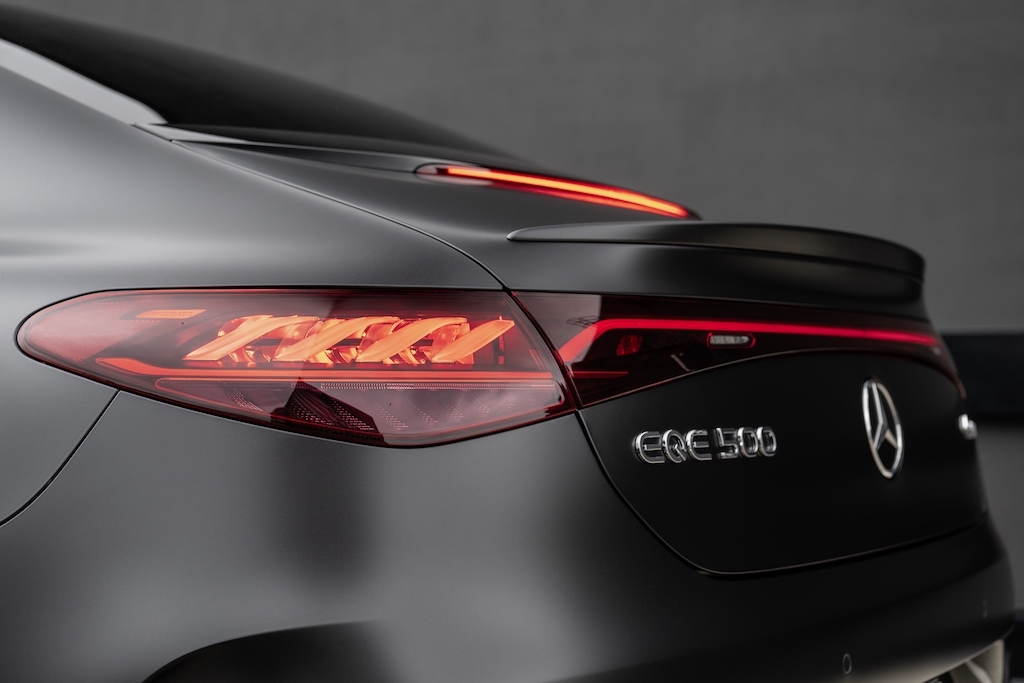 The EQE is pretty much all that I had hoped for. Smaller, lighter, more practical, more connected to its driver and a lot less plush than its bigger brother. Unfortunately, it’s not a looker. However Mercedes’ wheel choice and AMG line do make a difference in case you have budget available to dress it up more.

The EQE is a quiet, exceedingly comfortable and effortlessly swift car. On first impression it rides better than an EQS too. Well, on air suspension it does.

There’s no doubt it’s a much better-appointed object than a Tesla Model S, but Mercedes’ efforts to outdo every rival on tech may make this EV a bit too radical for some. And you’d never have thought that about an E-Class.