The Fiat 500 has been reborn as an electric car, but it keeps its all-important retro-chic looks, and you can still have it as a hard-top or cabriolet. It is bigger and heavier than before. 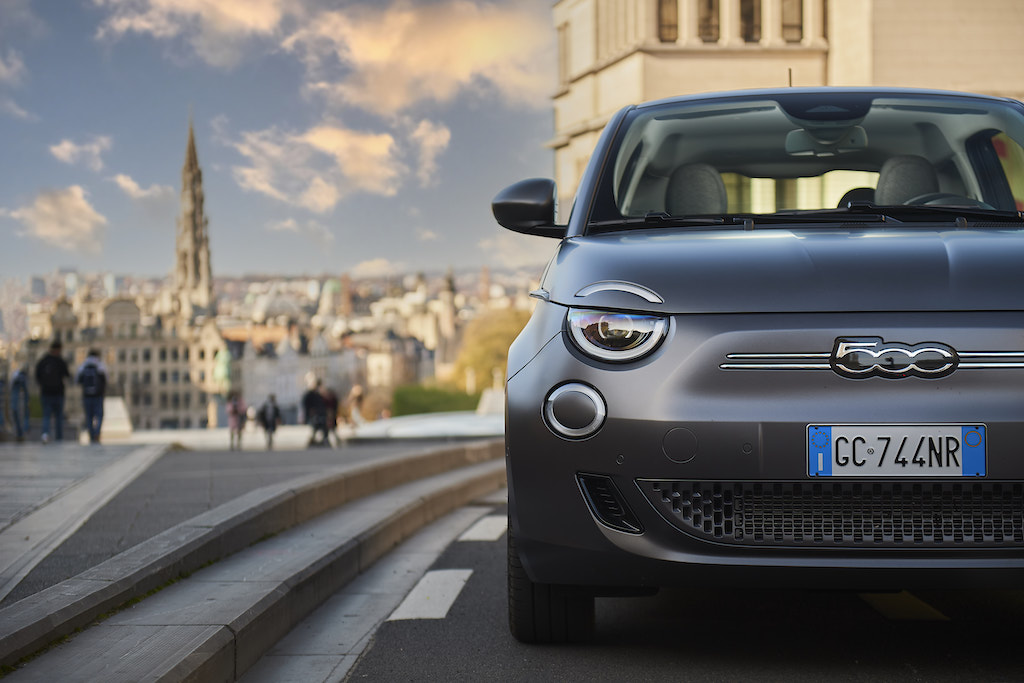 If it’s retro charm you’re after, not many new cars come close to the chic Fiat 500. With looks harking back to the Fifties classic of the same name, this reimagining of the 500 (Cinquecento in Italy) turns heads like few other cars in its price bracket. Confusingly, there are two versions of the Fiat 500 on sale to choose from: the pure-electric version that Fiat is calling the New 500, and the previous-generation, petrol-powered model that’s been rebranded the 500 Hybrid.  It’s the electric version we’re focusing on here. 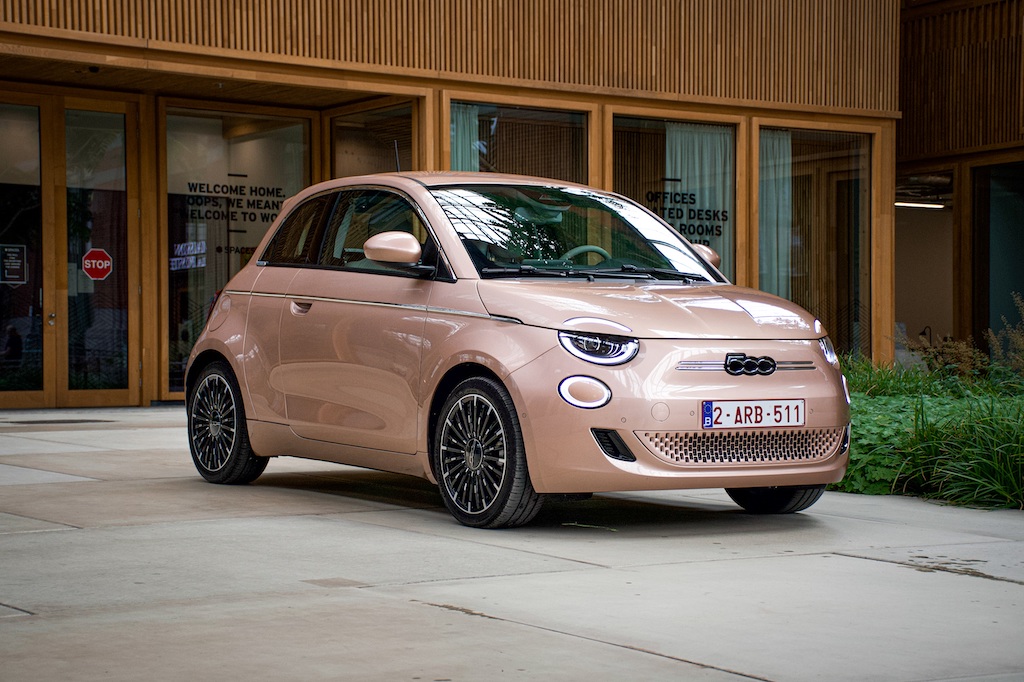 The new Fiat 500 is a superb all-electric city car, and one that should be at the top of your shortlist if you’re in the market for a stylish and immensely capable small EV. The 500 retains all of its familiar Italian flair, and is now even more appealing with updated on-board tech along with a practical real-world range that leaves close rivals lagging behind.

At first glance, you might think not much has changed with the new Fiat 500 compared to the previous model. Well, you’d only be half right, because although the famous Nuova 500 profile is still easily recognisable, the latest third-generation car has switched to all-electric power. 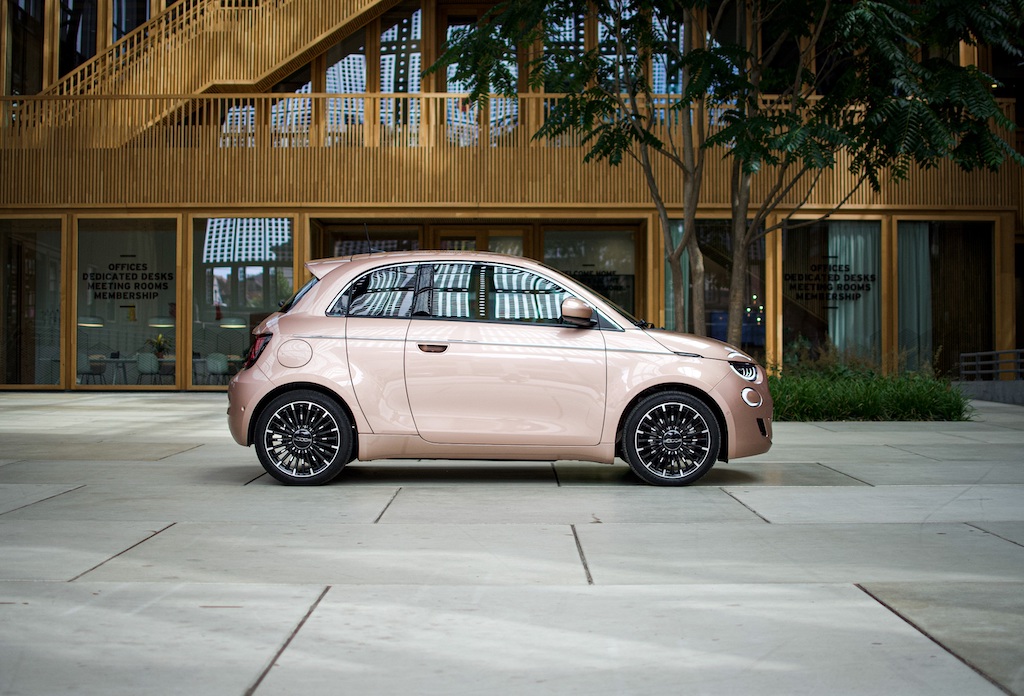 The new 500 is slightly longer, wider and taller than the previous model, which remains on sale in petrol/mild-hybrid form, and has been developed using an all-new platform. Only the range-topping La Prima gets standard LED headlights for better visibility at night, and adding them to cheaper trim levels – as part of the optional Magic Eye Pack – isn’t cheap.

Given its retro exterior styling, you might be surprised by the relatively modern and conventional look of the Fiat 500’s interior. The ergonomics are good, and while there are not as many upmarket, soft-touch materials. In short, it doesn’t feel at all cheap inside. 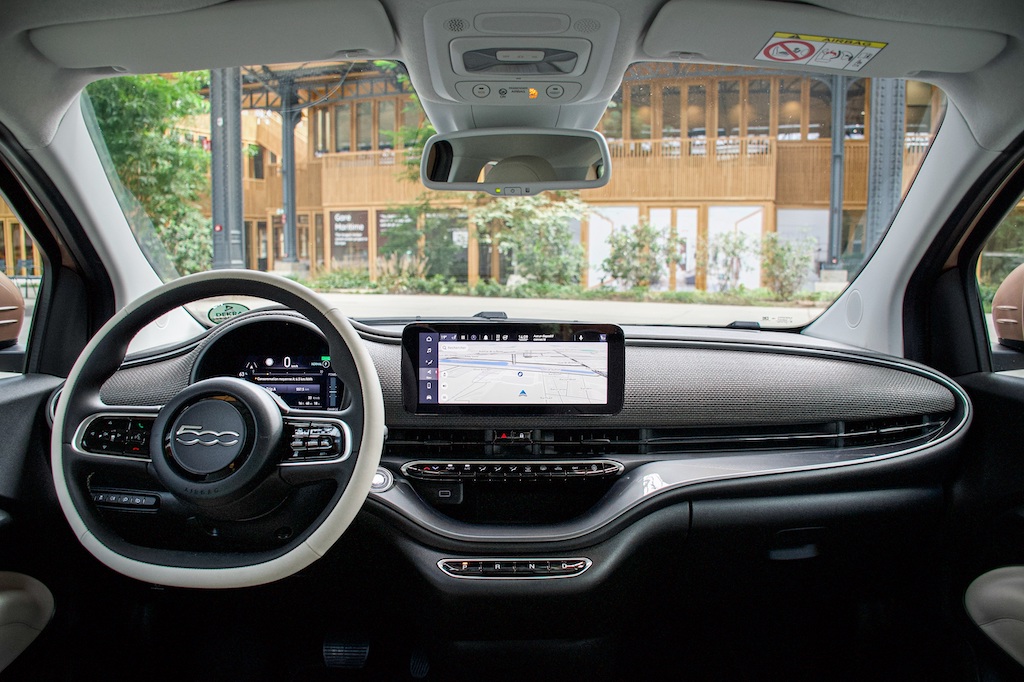 loaded route giving the first navigation instruction took just a couple of seconds.The 500 offers wireless connectivity to Apple CarPlay and Android Auto, should you not want to rely on the in-car systems.

Despite the overall dimension of the 500 being quite compact, there is plenty of headroom inside, while the seats offer plenty of movement up, down, forwards and backwards.The climate control buttons have been kept separate from the infotainment functions, meaning they are much easier to use – no clicking or swiping through menus to find the specific thing you want to change here! Sat just below the climate controls are the gear selector buttons. Again, very obvious and very easy to use. 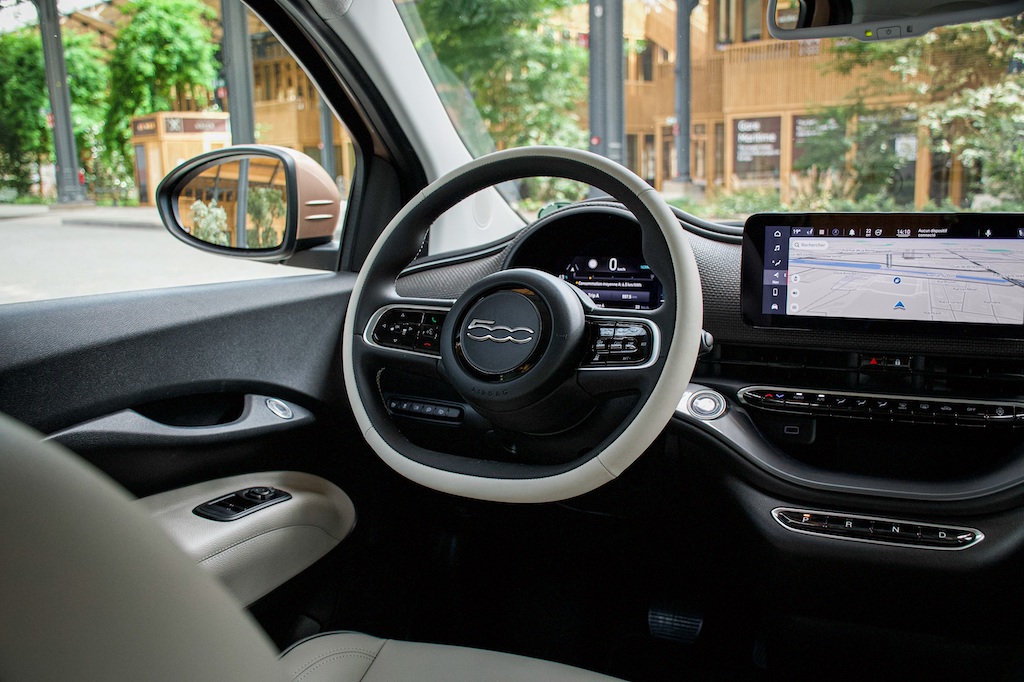 There is loads of storage options in the front, but nothing for rear seat passengers. If you’re sat in the rear, it’s a bit cramped.

The 500e is a small car, so people might not expect acres of space to be given over to storage solutions. However, the door bins are wide enough for a generous sized bottle – at a squeeze – and there’s another storage area in between the front seats. Here you will also find a USB port and 12V socket to charge or run electronic devices.

Lift the central armrest in the front (which can be moved forwards and backwards to suit your needs) and there’s another – really quite deep – storage area. And we’re not done yet! Closer to the floor, in between the front seats, there is a fold-out cupholder and the dash also integrates a surprisingly large glovebox for even more items to be stowed. 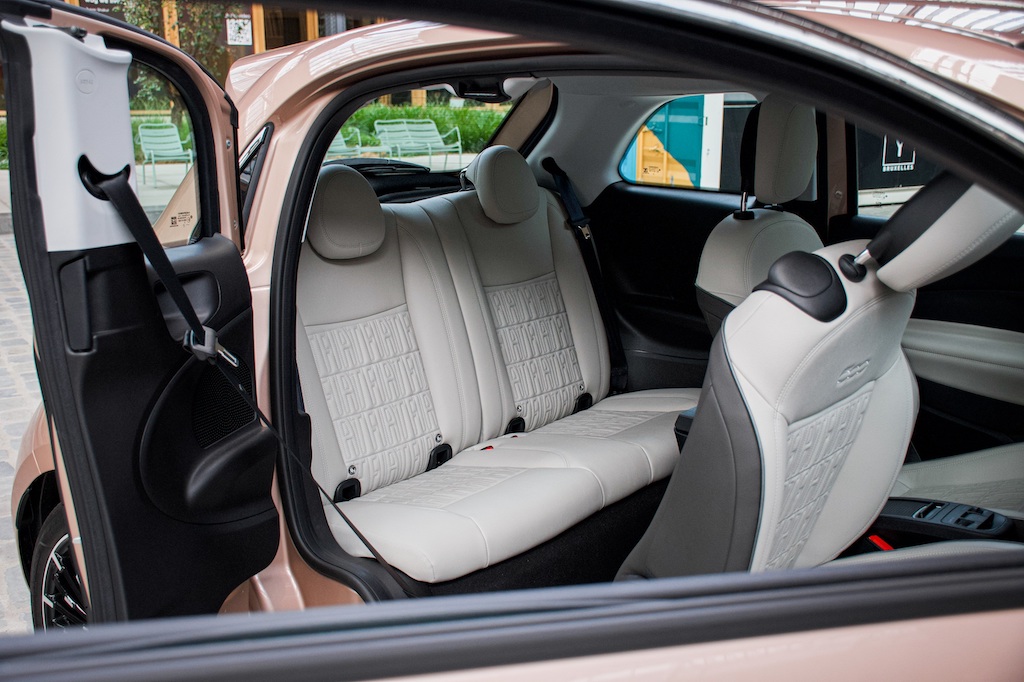 There are only two seats in the rear of the 500e and, being honest, they are best suited to children or small adults. Is the 500 3+1 a smashing success? Well, if you see that third door as a nice gimmick, or if you have small children that you have to strap into their seats. That is easier than with the three-door. But not if you expect that the Fiat 500 now offers a spacious entry to the rear. It keeps on wriggling for advanced riders if you’re tall…

As you might expect, the boot isn’t huge in the 500e, offering 185 litres. but it’s enough room to squeeze in three small suitcases and 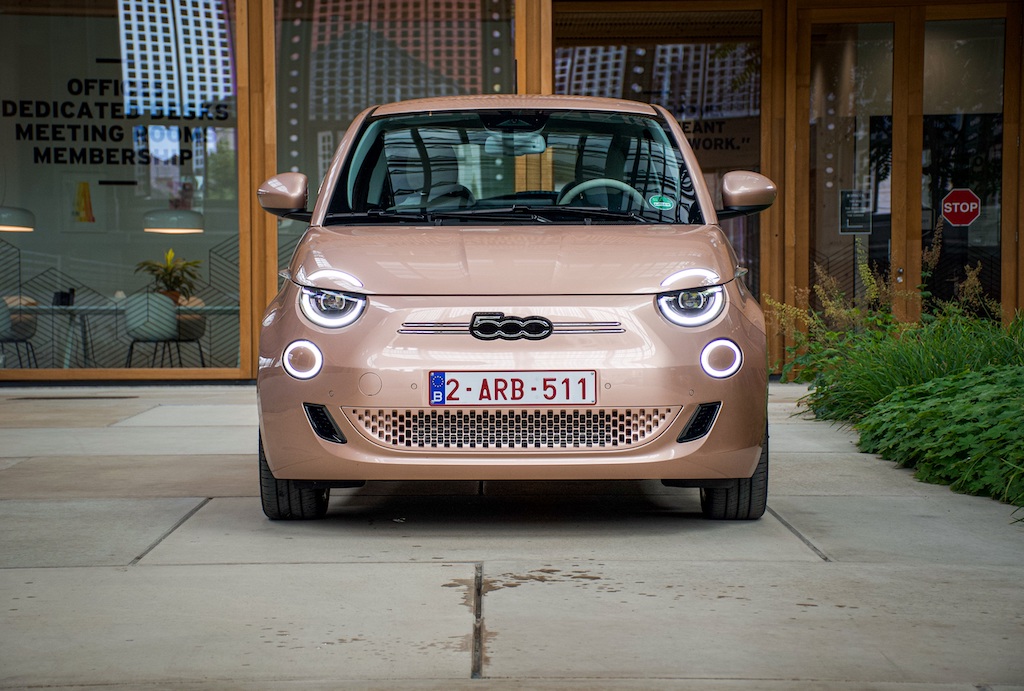 The Fiat 500e comes with either a 23.7kWh battery with a 115-mile range or a 42kWh battery that gives it a 320 km range.. You can recharge your 500 using a three-pin socket, but that’ll take all night – literally. You’ll be better off getting the optional 7.4kW wall box that’ll fully charge its batteries in a little over six hours.

You’ll also want to shell out extra for the 11kW charging cable, which will speed things up nicely – although it’s annoying Fiat charges extra for it at all. 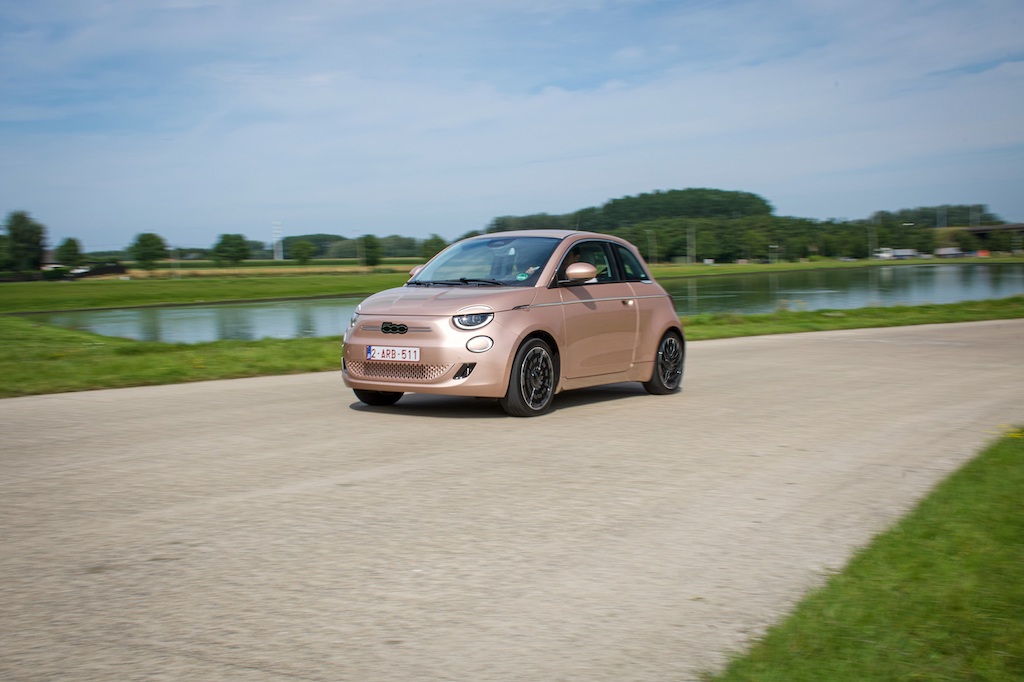 The quickest way to charge the larger battery in the new Fiat 500 is using an 85kW public fast charger. These can top it up from empty to 80% charged in 35 minutes, and add a useful 30 miles of charge in just five minutes.

The Fiat 500 comes with either a 95hp motor that can hustle it from 0-62mph in 9.5 seconds, or a 118hp electric motor with enough poke to accelerate it from 0-62mph in nine seconds. That doesn’t sound particularly fast but the new 500 will do 0-50 km/h in three seconds, which is nippy in town and faster than most small city cars. 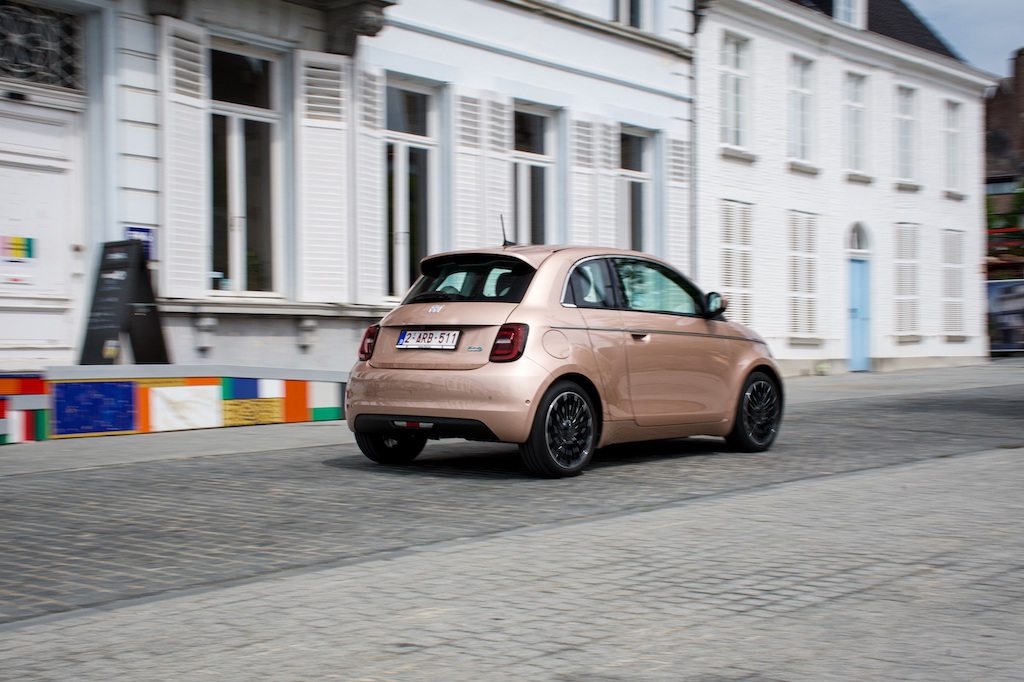 Also handy in town is the new 500’s automatic emergency braking that’ll spot pedestrians and cyclists in your path and automatically apply the brakes if it thinks you’re about to hit them. That’s in addition to adaptive cruise control that’ll accelerate and brake for you on motorways to keep you a safe distance from the car ahead.

There are three driving modes, Normal, Range and Sherpa. Range mode uses the motor to recharge the batteries when you brake to help boost the Fiat 500’s range, while Normal model tones down this ‘regenerative braking’ effect. 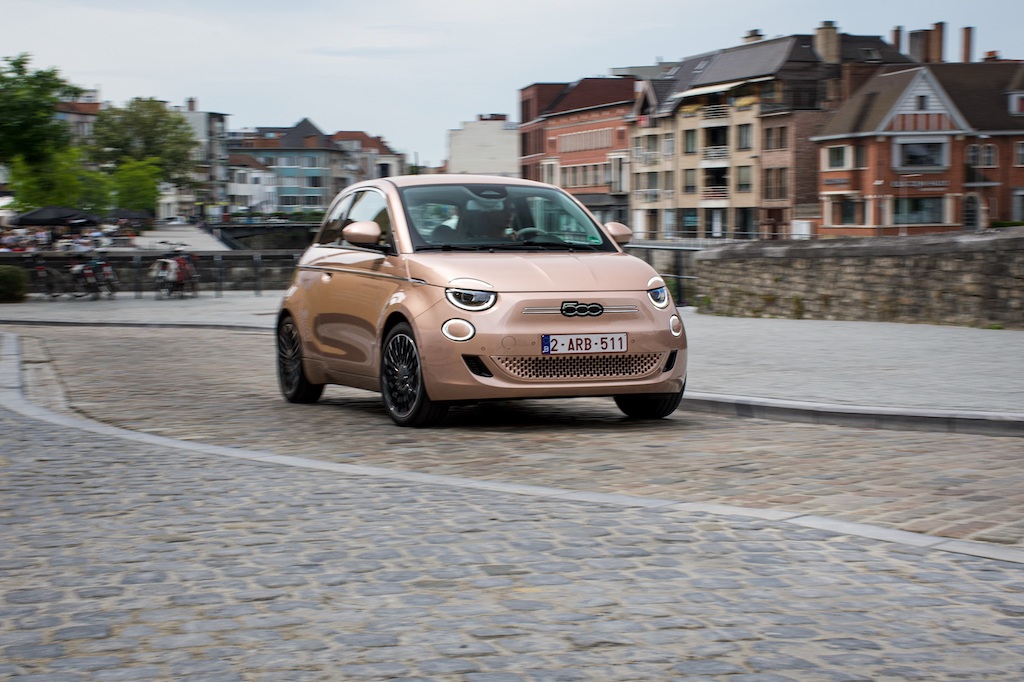 The Sherpa function limits the Fiat 500’s top speed to 80km/h (down from 150km/h) and turns off the air conditioning. These extreme measures will be useful in an emergency when you really need to eke out every last mile to reach a charging point.

The Fiat 500 was always a good city car, but it’s been made even better by the adoption of electric power. It has a tight turning circle and is great for whizzing along narrow streets or darting away from traffic lights. It doesn’t lean too much, even through tight turns, and has plenty of grip.

The steering is very light, meaning that tricky moves around corners, roundabouts or car parks are a doddle. Such is the weighting that it’s possible (although very much NOT recommended) to steer with one finger on the wheel. 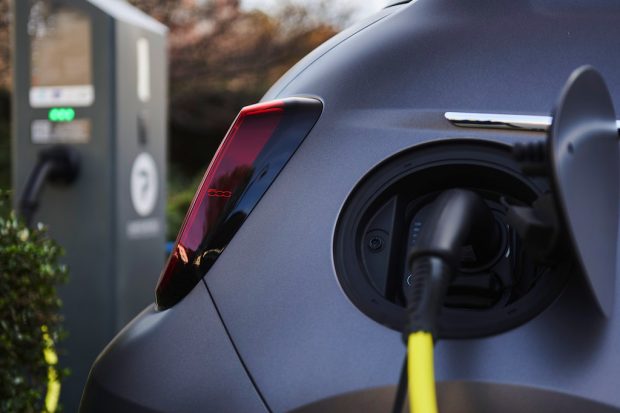 Key to this improvement is how well Fiat has engineered the 500 to make it such an effortless and uncomplicated car to drive – particularly at slower speeds. One-pedal driving is possible if you choose the right drive mode, helping to take some of the strain of navigating through busy urban streets, while the 500’s drivetrain is reassuringly smooth and quiet on the move.

Put the car in ‘Range’ mode and the regenerative braking kicks in – and then some! It takes some getting used to – it almost feels like someone is putting their foot down hard on the brakes. But the one-pedal driving saves energy – and miles – which is useful if you are someone who suffers from range anxiety. Parking is also a beneficiary of the light steering, so tucking into tight spaces is made easier, and moves can also be dispatched quickly because the visibility is decent. The huge door mirrors and high-definition rear camera come into their own, here, too.

Take the 500e out onto dual carriageways and motorways and you’ll notice that wind and tyre noise are quite prominent. It’s quite distracting, but might be expected given the size of the car and the emphasis on town driving, rather than performance at higher speeds. The 500e does offer automated cruise control as well as auto-steer to help keep safe and secure in what can be a challenging environment for city cars. With the lane-keeping technology, the steering inputs are noticeable, but that just proves that the technology is doing its job! Acceleration and overtaking times have been improved over the previous petrol 500, which will inspire confidence for those on main roads, or faced with lots of traffic to navigate. On country roads, the unsettled suspension is more noticeable than either in town or on the motorway.  The ride is fairly choppy but not uncomfortably so. 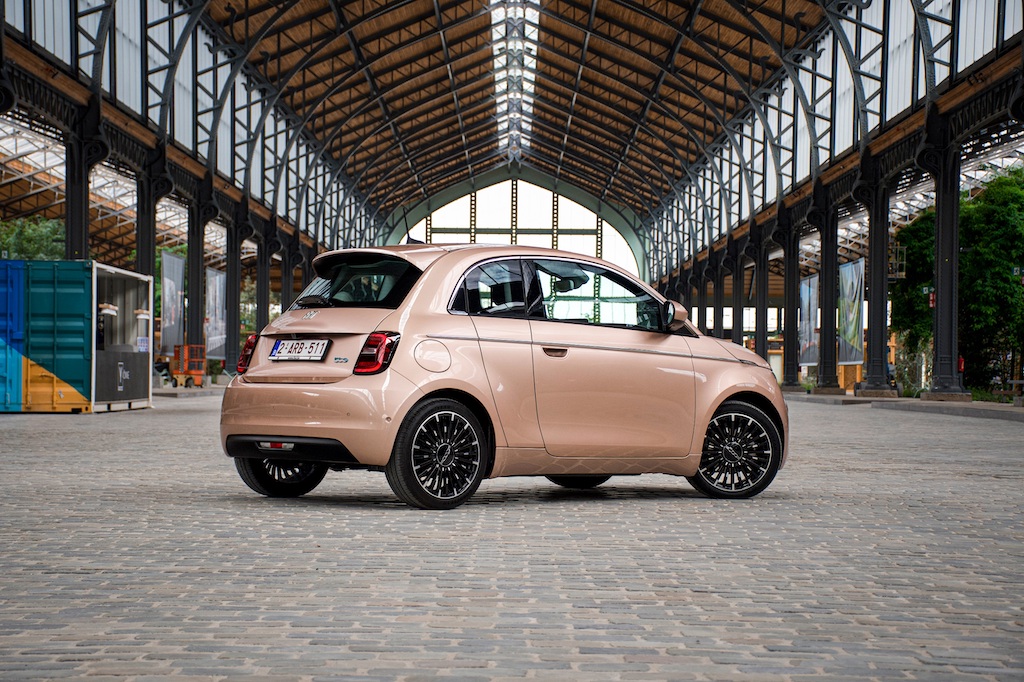 The all-electric Fiat 500 fulfills its city car brief brilliantly, and is one of the best EVs you can buy today offering good value for money. The 500 excels in and around town; easy to drive with decent levels of refinement. If you aren’t ready to go electric, fear not: Fiat will continue to sell the ‘old’ 500 powered by its mild-hybrid petrol engine alongside this new model for a little while yet find a comfortable position.