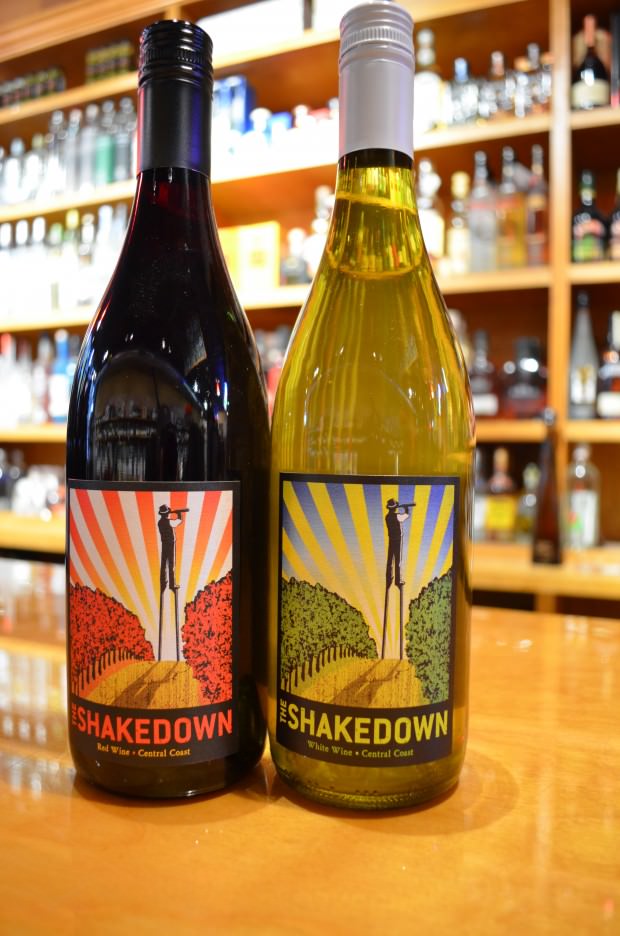 One of the great secrets about Chicago to people who don’t live here is that, despite its famous skyscrapers and beautiful downtown Loop area, the real soul of the city lies in its neighborhoods. If each area of the city was a type of person, the Loop might be tall, dark, and handsome (not to mention RICH!), but your true love would be found as one of Chicago’s neighborhoods. They have their own quirky personalities and once you find the one that is right for you, you will feel as though it is the only one that ever really got you. Each has a unique power to enchant its residents and mesmerize them for years. Calypso may have held Odysseus on her island for seven years, but Chicago has held me for eight (read: The Odyssey). The difference between me and Odysseus, however, is that I’m not alone.

We Chicagoans do venture out of our home neighborhood every once in a while. When we do, we often ask ourselves, “Why don’t I come here more often?” That is exactly what happened to me recently when I travelled to Lincoln Square. Located on the northwestern-ish side of the city, it is just a few Brown Line train stations away from Boystown off of the Western stop.

I went there to volunteer at a “wine stroll” that the local business association, the Lincoln Square Chamber of Commerce, hosted as a bi-annual fundraiser. Businesses that are members of the Chamber agree to hold wine tastings in their stores for two hours. All of the shops are along the main commercial district, and about 200 tickets are available for sale to the public at a cost of $40. Participation is not limited to local bars and restaurants, either. Some of the stores that held tastings include a frame shop, jewelry store, gift shop, and a high-end women’s consignment store. Sixteen businesses participated in the wine walk, and all but one were independent and locally owned (the one is a franchise that is locally owned). It is a great way to promote the neighborhood, and as a consumer to support local businesses while having a fun night out. 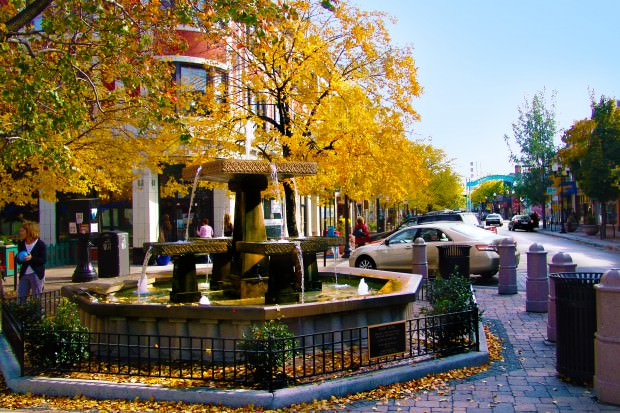 The “Square” itself is worth visiting on its own merits. It is a delightful pedestrian friendly retail and restaurant enclave featuring a small plaza, but its history was based in farming. The earliest settlers were German immigrants who grew celery and cucumbers. In fact, so much celery was grown in the area in the mid 1800s that it called itself the “Celery Capital of the Nation.” With this agricultural knowledge nugget in mind, I am officially suggesting that Lincoln Square pay homage to its history and begin a “Bloody Mary Stroll.” Your local grocer’s celery, pickles and celery salt beg you. Please. And thank you.

I helped with registration where each “wine stroller” checked in, received their wrist band and picked up a very chic stemless wine glass to use for the tastings. After my volunteering duties were over I was able to join the walk as a consumer. I am a particularly good Samaritan when free wine is involved (note: I will work for food… and wine). 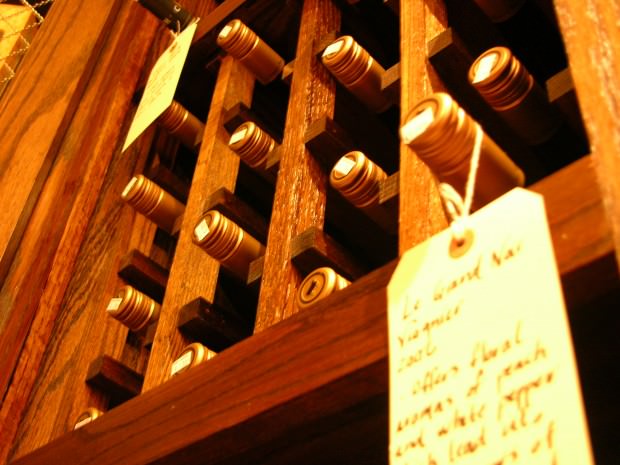 One of the first stops on my stroll was a Greek restaurant called “Barba Yianni.” Yianni is pronounced just like the singer, but without the bad hair, and translates to “Uncle John.” Its name isn’t the only reason why Barba Yianni is a family restaurant. It was first opened in 1981 by THE Uncle John, and is now owned by his nephew. Two Greek wines were served at this location with a light yet creamy hummus, and a spanakotiropita. Spanakotiropita, as it was explained to me, is different from spanakopita; the traditional Greek spinach stuffed pie with a flaky crust. This version has cheese in it (tiro). Fabulous, fabulous, fabulous cheese. The spanakotiropita, spanakopita or however you want to call it, was the best I’ve ever had. I will be sure to visit Barba Yianni again.

The next place I entered, Gene’s Sausage Shop, is a European inspired grocery store and –more obviously- sausage delicatessen. It is also a multi-level food palace. Upon entering, your eyes are immediately struck with the drama that open air design creates. A grand wooden staircase leads customers up to the second floor, which acts not only as additional shopping space, but a bird’s eye gallery for anyone who loves the sport of people watching. The second floor circles around the perimeter making it a balcony within the interior. Prominently hanging above the staircase is a neon marquee sign that says “Meyer Delicatessen,” which is the name of a German inspired meat shop that occupied the storefront previously, but went out of business in 2007.

My favorite feature, however, is one that I did not get to visit (this time). There is also a rooftop beer and wine garden where customers can order grilled bratwurst and other sausages. Now I am really missing summer. Of all the great places in Boystown, why there isn’t a sausage shop as beautiful as Gene’s is beyond me. I, for one, think it would be a hit. After all, who doesn’t love magnificent looking sausage?

My next destination was “Enjoy, An Urban General Store.” I love a name with a good proper title that doubles as an order. An urban general store is similar to a general general store, but is a much more hip version. There is a great selection of Chicago inspired products, as well. I was eyeing a wallet with an interpretation of the Chicago flag on it. It is made from 100% recycled plastics by CONSERVE, a non-profit that invests its proceeds into poor urban communities in India. This got me saying, “Enjoy, a humanitarian conscience while you shop!” If that, however, doesn’t entice you from getting full enjoyment, perhaps bacon will! The store also has a fun and quirky line of bacon inspired products, which includes bacon flavored toothpicks, gum, and bacon designed watches, and wallets. My own personal favorite, however, are the bacon bandages because in America, bacon really does go on everything. 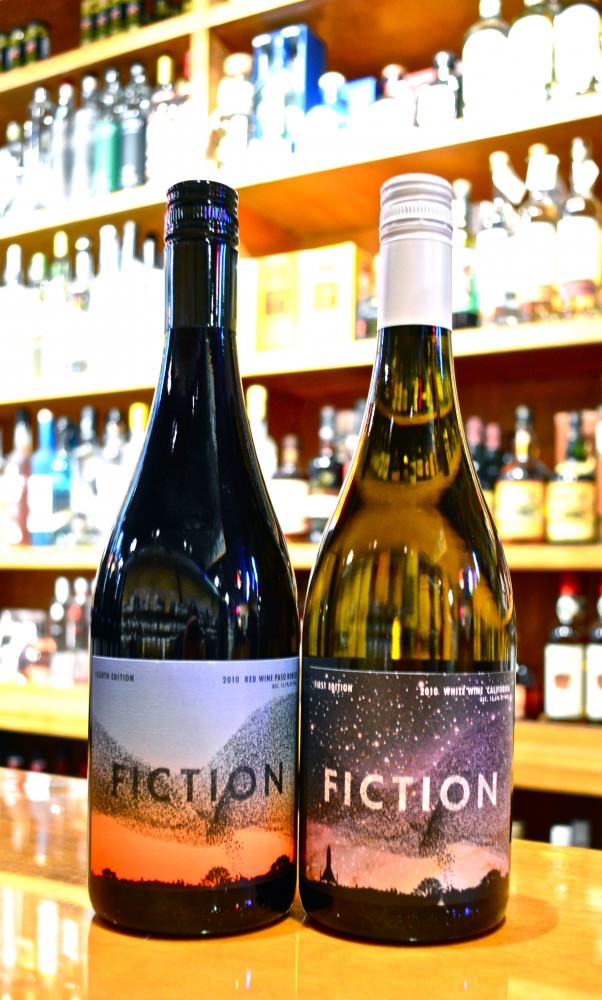 The wine that was offered there was also enjoyable! I am not writing a word of fiction in that statement. I am writing a mouthful. The tasting consisted of four wines by the California winery, Field Recordings, which makes the labels Fiction and Shakedown. I found both to be delicious, but asked for a second helping, just to be sure (It was for your benefit as a reader. I am so selfless). The Shakedown wine was developed specifically for consumers that wanted an easy drinking and environmentally sustainable wine. I found it to be versatile, unpretentious, and welcoming. That certainly does sound like Chicago in general and Lincoln Square in particular. If that is hard for you to believe, both are looking forward to showing you that truth can, in fact, be stranger than fiction when you visit.

For more information, about future wine strolls or any of the products and stores, please visit: