Fabio Kallas is a freelance artist born in San Juan, Puerto Rico 1 July, 1982. In 2000 after graduating from High School, he started studying Visual Arts concentrating on Photography at the University of Puerto Rico in Río Piedras. 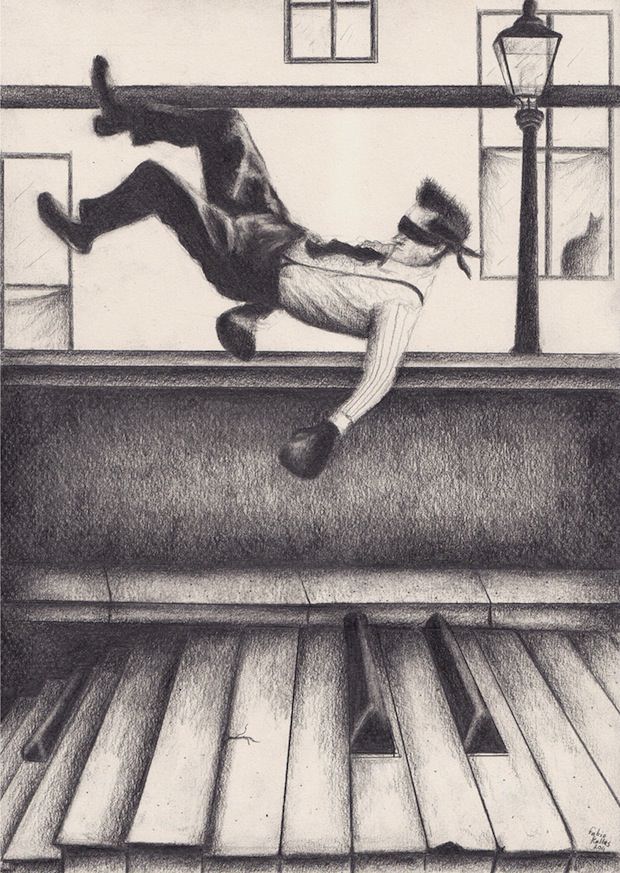 He currently lives and works in Berlin where he divides his time exploring drawing, painting, video art and photography. He uses drawing as an aesthetic medium to present situations in which ambiguities of the human existence are implicit. His drawings and paintings are combined with a sense of ambivalence pattern method, realism and unreality usually merge in his art, which is also based on a metaphorical confrontation between life and dreams. 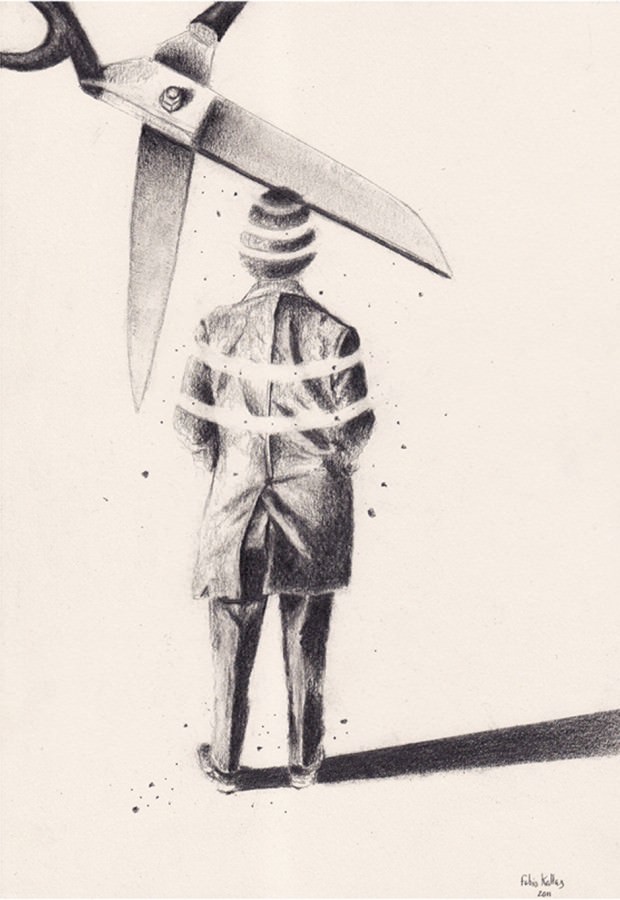 Fabio Kallas tries to challenge fanciful perceptions with a playful irony in his work. One of his projects include a series of ink and charcoal drawings where he deals with the poetical use of collective solitude and the rare individual displacement.

Besides, he also still works with black and white film in his city photographs. Conceptualizing images this way he explores the emptiness & connections between people and their surroundings where real creation takes place. Currently he is working on his next exhibition in Hamburg, Germany. 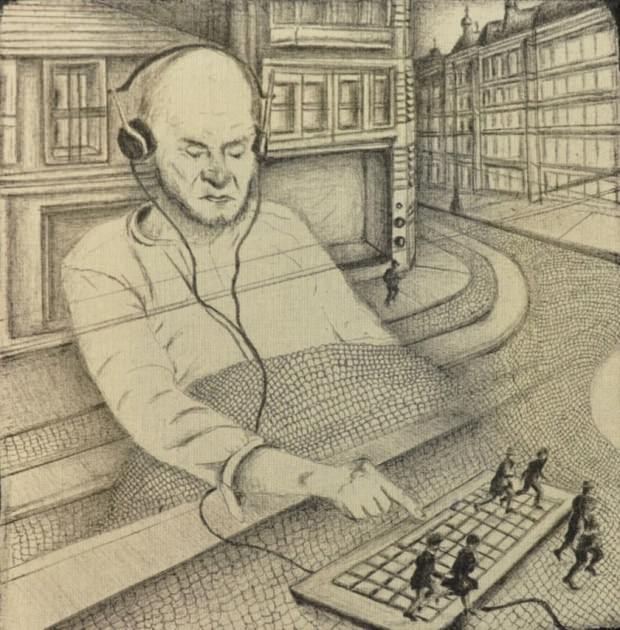 So lets start with the questions, the first one is from the artist Katerina Jakusova.

What would you do, if you woke up and found out you´re Donald duck?

I will go back to bed, sleep again and try to wake up next time as a unclassified insect in the middle of a Prague bedroom. 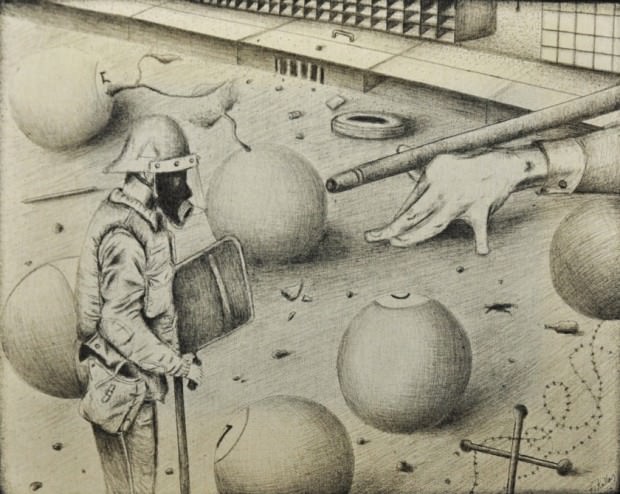 GUSMEN: What’s the first thing that you do when you get up in the morning?

I kiss my girlfriend on the cheek, wake up, take a piss, make breakfast & turn on the TV to watch the news of the day. 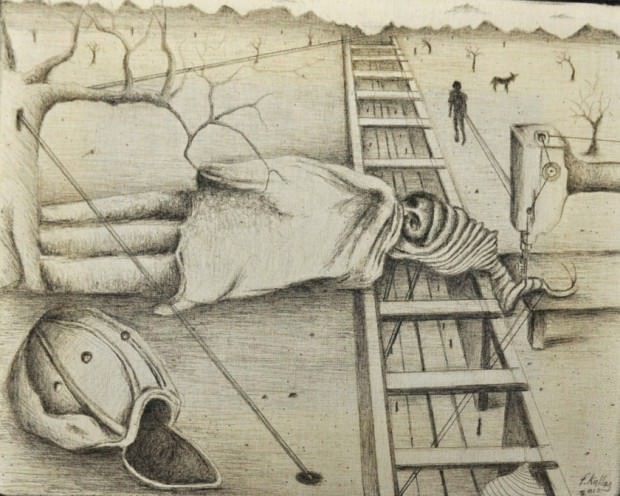 GUSMEN: Between drawing, painting, photography and video art, which media do you feel like you can express yourself better with?

It depends on my mood and the ideas that are floating through my head that makes me act on a specific medium to articulate and express my work, but at the end I think I feel more deeply influenced and connected with drawing, because it has a unique kind of authentic reaction towards me, like an unconscious loyal pact. 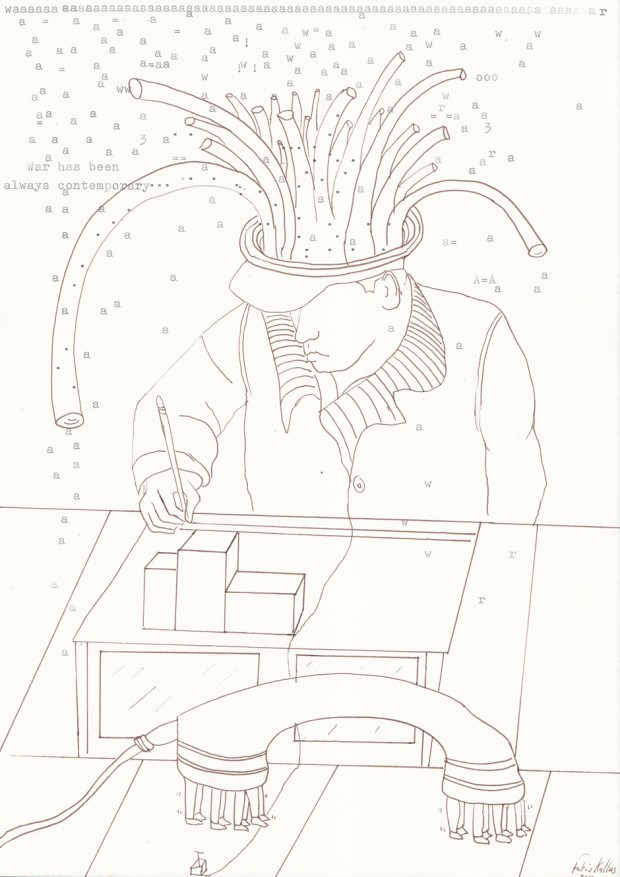 GUSMEN: Why did you choose to live in Berlin?

First I came to Germany because my lovely girlfriend lives here, second I chose Berlin for a lot of intuitive reasons, but I will name only the great outstanding features that are based on my personal opinion of Berlin.

The city has a historic strange duality of modern and old that, somehow, challenges the perception of how a city should function in the eyes of a foreign visitor. Another thing is that the cost of living is still cheap, you can find a lot of good connections & bicycles are nearly on every corner.

There’s a good atmospheric feeling that something is against something, it is a Pro-Art city, it’s not that clean which makes her beautifully peculiar, almost everyone is doing a “project” and there´s no time for boredom. 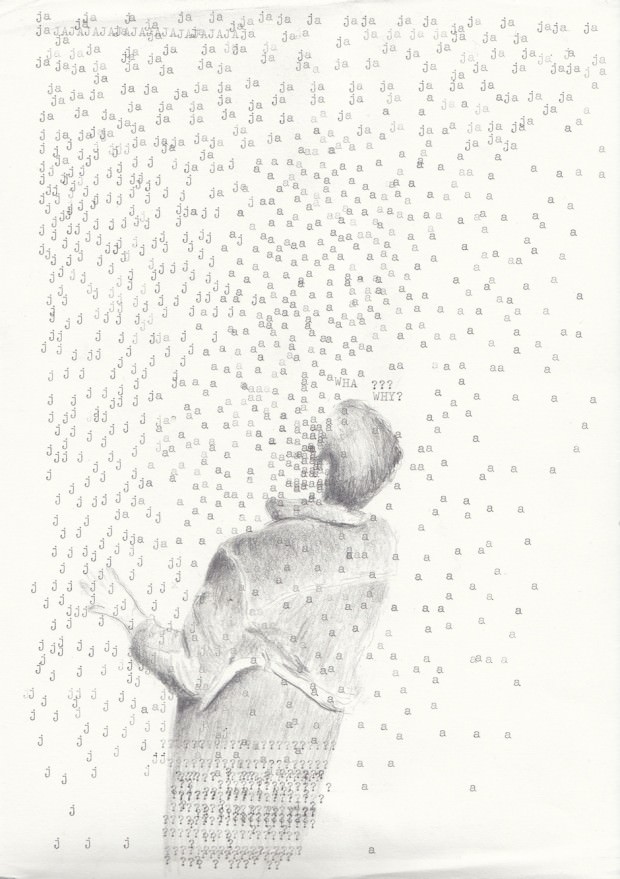 GUSMEN: What’s the last thing that really surprised you?

I think it’s the last book that I´m reading, a great classic of Latin American Literature, called: “Pedro Páramo” by Juan Rulfo. It has a lot of beautiful and unreal passages that remind me of my childhood in Puerto Rico. 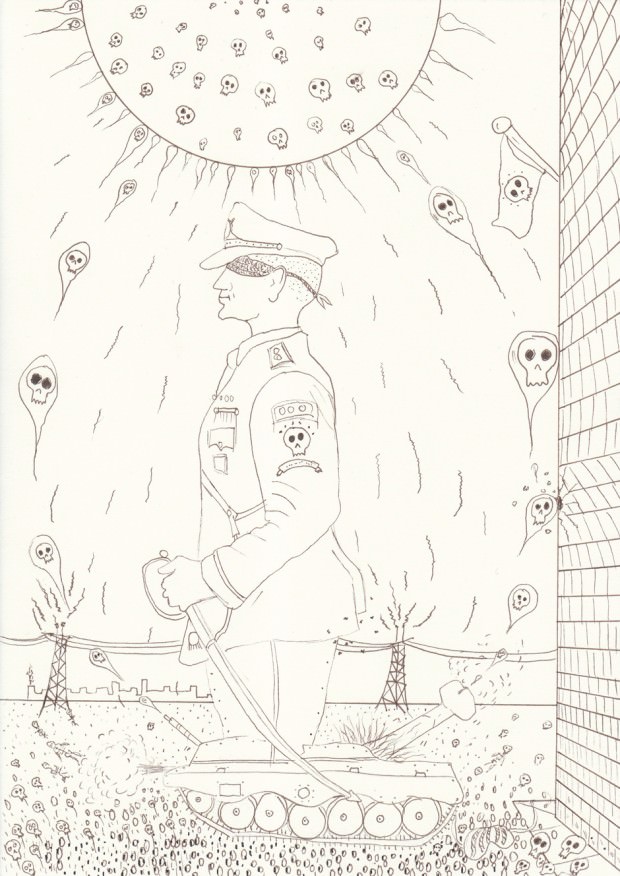 GUSMEN: What are you focusing on at the moment?

At the moment I´m working on a new series of paintings and I´m also making some experimental videos. I´m planning to do a second solo show exhibition in Hamburg soon. 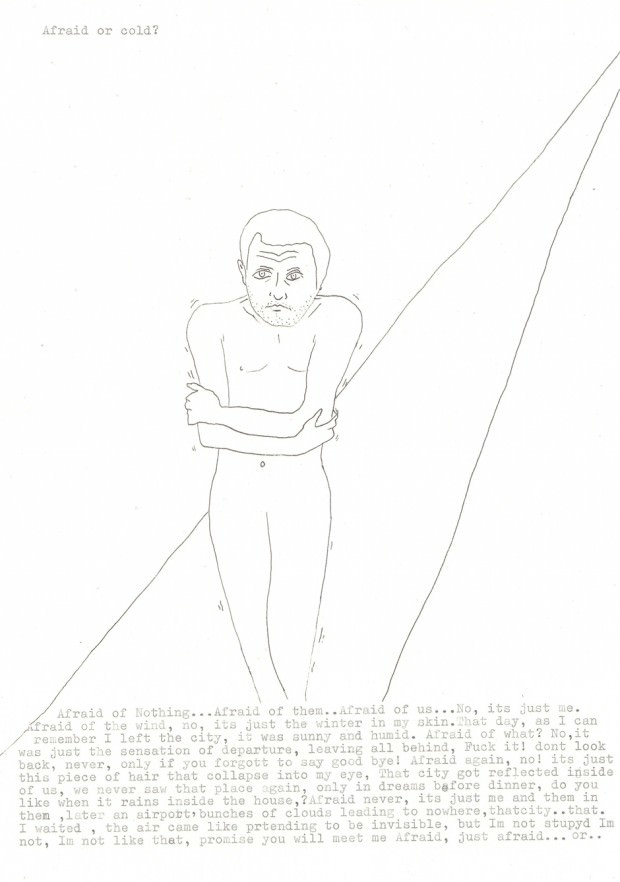 GUSMEN: What do you want to achieve in the future?

I want to keep making art, travel around the globe, at least someday, write a novel, try to read most of the great authors of the 19th and 20th century literature, learn more and more about other cultures and try to help other people. 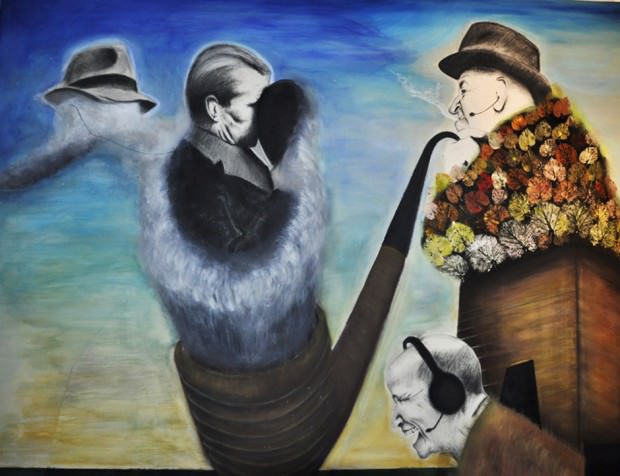 GUSMEN: What would you ask the next artist that we interview (without knowing who it will be)? 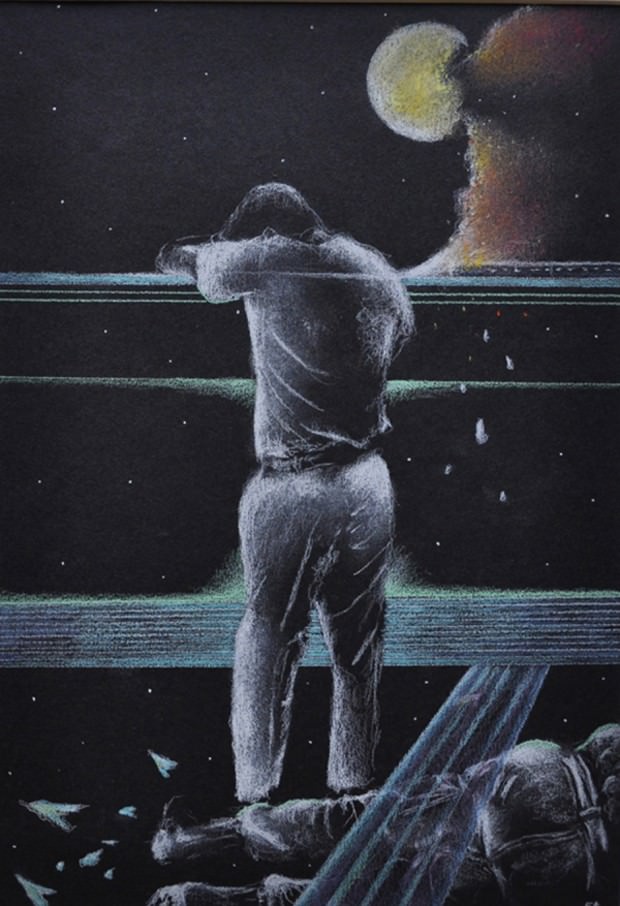 To see more of Fabio’s work, check out his website:
www.fabiokallas.com