« Insha’Allah we shall land at Islamabad international airport in twenty minutes… », the captain informs us. Looking out of the window we can see the minaret of the Faysal mosque, the largest mosque in the world. We have embarked on a journey to follow in the footsteps of Marco Polo on the silk road. Or to be more precise, one of the silk roads. Our destination is the Taklamakan desert (or the ‘point of no return’) in Xinjiang.

Mohammed forces his way through the traffic with several toots of the horn. On the car in front of us, a bumper sticker reads: »be a real man, join the army ». Our van negotiates a roundabout which is beautifully decorated with nuclear missiles. A reminder of the war in Kashmir.

After a stop at the Buddhist archeological site in Taxila, we join the Karakoram Highway, the second highest road in the world. Close to 900 workers died during the construction of its 1500km which traverse the Karakoram mountain range. Our journey begins in Kohistan, a region where Islam is interpreted strictly. To be clear, this means no alcohol in the lodges, most of the women we see in the street clothed from head to foot with only their eyes visible, the men almost exclusively bearded. Despite our obvious differences, we are still given a warm welcome.

The road between Chilas and Gilgit is flanked by two giants, each rising up more than 8000 metres : Nanga Parbat(8126m) and the more widely known, K2, the second highest mountain on the planet at a height of 8611m. Widely known, and sadly for me, a very dangerous mountain where my friend Hugues was swept to his death by an avalanche under the ‘bottle-neck’ on his way down from a successful summit attempt.

Suddenly we hit an enormous traffic jam. A huge rock mass, as big as a car, is holding up the traffic. A dozen or so men surround the rock, shouting and gesticulating. Eventually they start to move it using a jack from a lorry, but the progress is painfully slow…one centimetre at a time. Meanwhile, back in the queue of traffic, life returns to normal : hawkers start to move between the stationary vehicles, selling a variety of wares. Three hours later we set off again. To the side of us, the mountains still bear the traces of the old silk road.

At Karimabad, we are in the Hunza valley, the valley of the immortals and home of the elusive snow leopard. The people here are mostly Shia Ismaili, disciples of a more tolerant Islam. According to the legend, they descend from three soldiers from Alexander the Great’s army. This perhaps explains why the three village women, who come to offer us some apricots, have beautiful green eyes. 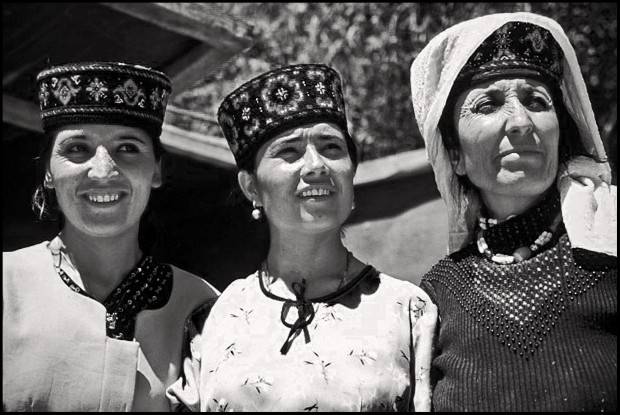 The valley ends at the Khunjerab pass (4693m) and the road becomes a track. Our replacement Chinese driver taking us across this no man’s land between the borders falls asleep at the wheel and the hardy Toyota veers towards the precipice. Awaking with a jump, he slams the steering wheel in the opposite direction, wheels screaming as they attempt to regrip the track, and we are safely back on terra firma. I tentatively look over the side of the truck to the sheer drop below and what would have been almost certain death had we taken the unexpected detour. In the hotel at Kashgar, our Uyghur guide switches on the radio before talking to us. He explains that the Chinese police have bugged the rooms with listening devices. Relations are clearly very tense between the Uyghurs and the Chinese.

After a night spent in a yurt, hosted by some Kyrgyz, a caravan of camels takes us to Mustagh Ata (7719m), the ‘father of ice mountains ‘ in Uyghur. It dominates the Kunlun mountain range. We set off to climb it… 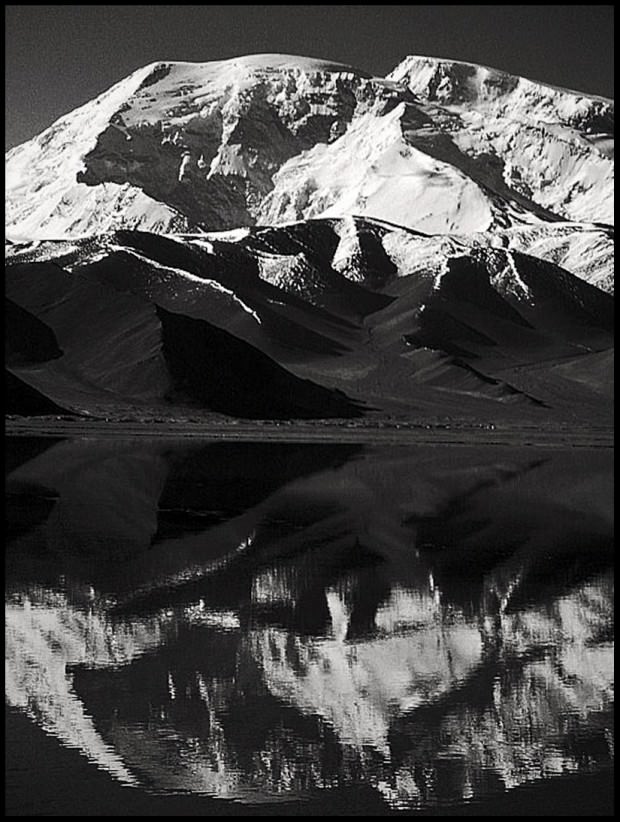