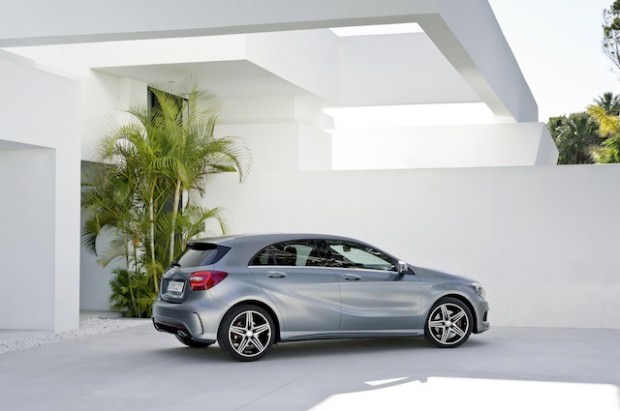 Having launched the first A-class in 1996 the new generation Mercedes A-Class is finally out after being anticipated for quite some time now.
With the new Class A, Mercedes changed totally the concept and created a premium hatchback aimed at the C-sector, one of Europe’s biggest.
If you plan to buy one, you will be able to choose between three grades: “Urban,” “Style,” and “AMG Sport.” 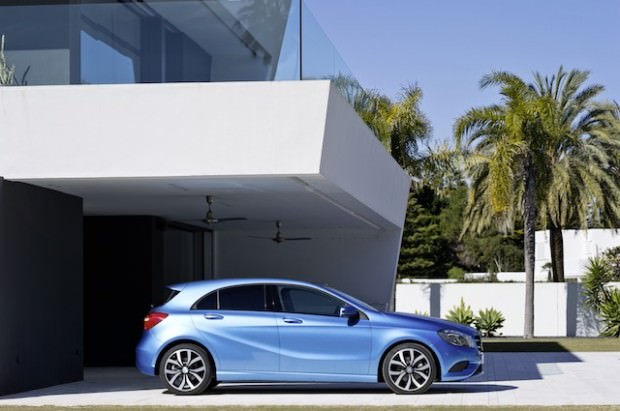 The big news is that this version of the Mercedes-Benz A-Class is no longer an MPV-like, high-roofed small hatchback. This model is sleeker and longer with a look that could turn the heads of traditional Audi and VW Golf buyers.
This new baby Mercedes is really attractive, especially at the front, where a wide grille feeds into the clamshell bonnet and into heavily scalloped sides. With a coefficient of drag of 0.27Cd, this is one of the slipperiest hatches in this class.
Its sharper design has yielded a low drag co-efficient that has helped cut CO2 emissions to 98g/km on one diesel model. That makes it the first production Mercedes-Benz to emit less than 100g/km ! The new car is 39cm longer but most of this is because the engine is no longer tucked under the cabin floor.
Even so, rear seat legroom is not a problem, and boot space of 341 liters is decent for this class of car. 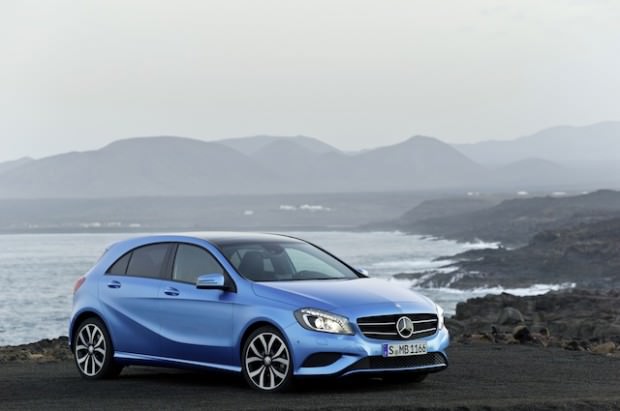 The new A-Class received a two-box design with a distinct character of its own, a sporty emotive exterior, and an exceptionally high-quality feel to the interior.
It was designed by combining concave and convex planes that create an effect of play of light, particularly along the sides of the car, which contributes to its unique appearance.

The car’s front end has a pronounced V-shape and includes separate headlamps, the radiator grille with central Mercedes star, double slats to either side of the star, and additional air intakes on the sides.
The headlamps feature LED technology and have been arranged in such a way as to create the characteristic “flare effect” for the daytime running lamps and indicators. 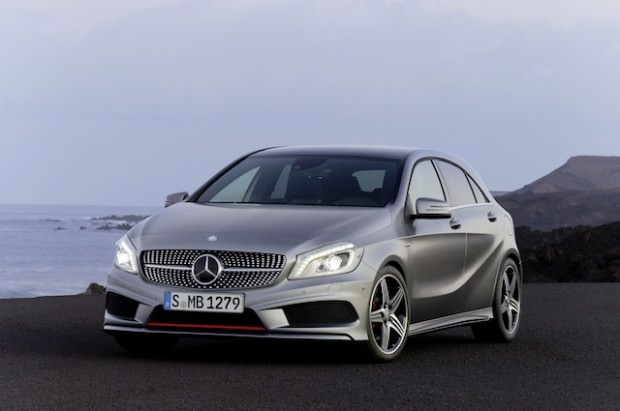 Viewed from the side, the new A-Class will be distinguished by its sensuously molded sculptural side panels and distinctive lines. The broad emphasis of the tail end is revealed in interplay of convex-concave surfaces and edges.

The tail lights continue the line of the muscular shoulders back towards the rear, while their horizontal orientation emphasizes the car’s powerful width. Here, too, the interaction between design and aerodynamics is very clear: the surface finish of the tail lights is not only an interesting design feature, but also improves the airflow around the vehicle thanks to defined airflow break-away edges in the rear section. 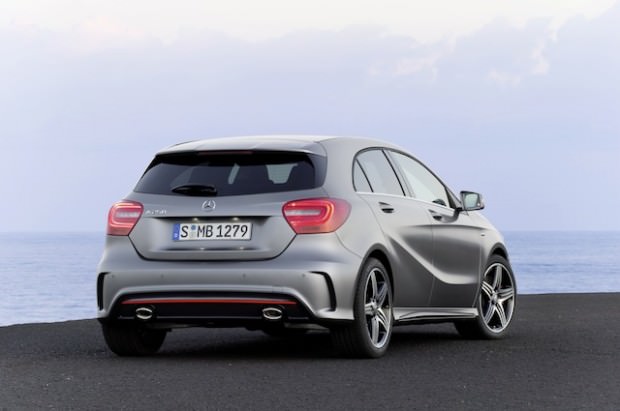 For the interior, Mercedes combined high-quality materials with the same sporty feeling of the exterior. The instrument panel has been divided into two different sections and the result is that the upper section appears to be supported by a ’muscle’.

This manufacturing process allows the use of special films with three-dimensional structures that make it possible to create a range of different surface finishes that permits an attractive play of light.
The standard front seats feel hard but offer a comfortable driving position and the rears accommodate easily a couple with head and leg room to spare, although a third adult is going to be squashed.
The seats can be ordered in a wide range of coverings, colors, leather, fabric, Artico/fabric, and geometry. As an option, Mercedes is also offering sports seats with head restraints. 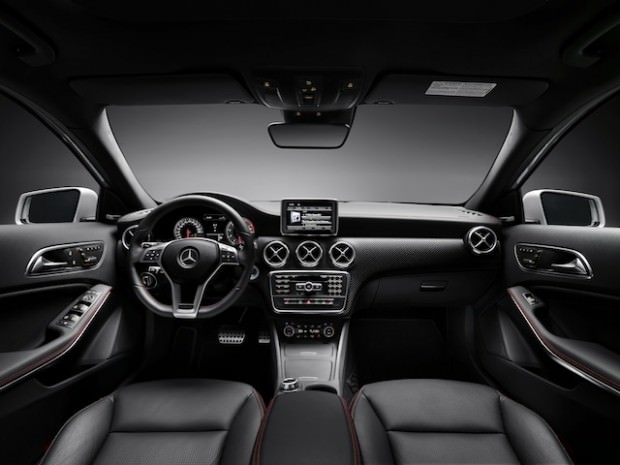 The instrument panel incorporates five round vents inspired by an aircraft turbine, while the display screen features a black piano-lacquer-look front panel and a flush-fitting silver frame. The company also installed a new 3-spoke steering wheel which comes with 12 function buttons and an electroplated bezel.

You can also choose from a host of gadgets including iPhone sync that allows you to link up the onboard operating system with your smartphone and use the menus and controls via the A-Class’s digital screen.

Safety innovations include fatigue detection, active parking assist, voice activation and blindspot monitors. You will even get a standard-fit collision prevention assistance system that warns you if it thinks an accident is imminent and then preps the brakes for an emergency stop. The A-class’s safety portfolio includes nine airbags and ESC in a safety-structure expected to deliver a five-star crash safety rating. 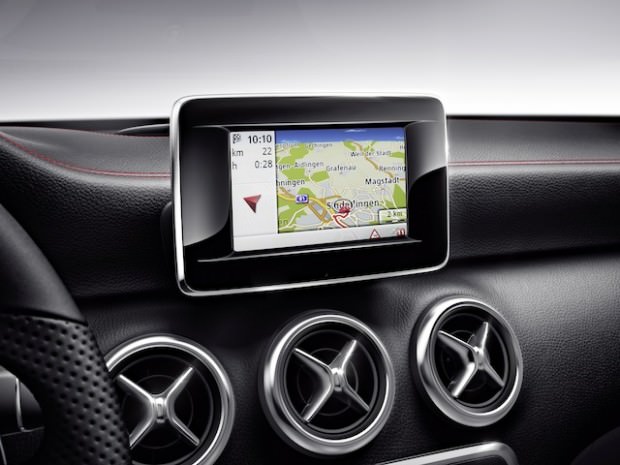 The engine line-up will include both petrol and diesel versions, with power ranging from 109 HP to 211 HP.
The petrol line-up includes 1.6 and 2.0 liters engines, with power ranging from 115 HP in the A 180, 156 HP in the A 200, and 211 HP in the A 250.
Diesel versions include: the 109 HP A 180 CDI, the 136 HP A 200 CDI, and the 170 HP A 220 CDI.
All petrol engines feature direct injection and turbocharging and can be combined with either the new six-speed manual transmission or, as an option, the 7G-DCT dual-clutch automatic transmission. All of them featuring the ECO start/stop function as standard. 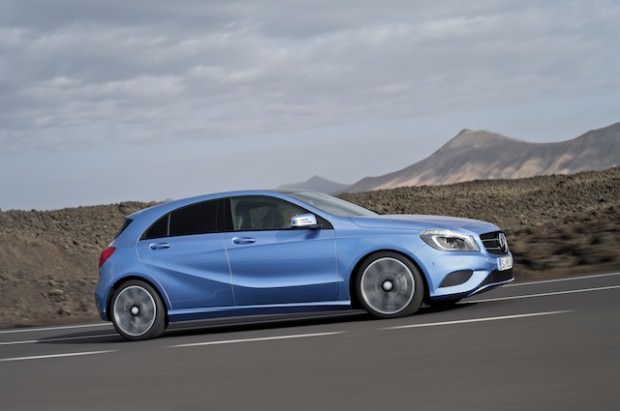 The driving experience is chalk and cheese compared to the old model. I tried A 200 Petrol. The engine is refined and powerful enough to haul 1.5 tons with reasonable alacrity. It also quieter than when fitted in longitudinally engined cars. Taut suspension gives the A200 a bit firm ride.
It’s no rocket but the 155kW 2.0-litre petrol engine packs a nice vigorous punch. The eight-second-sprint time ensures it won’t disgrace itself against bigger capacity opponents.
The new A-class goes, steers and stops with a willingness and tactility that makes it lots of fun to drive both enthusiastically and sedately. 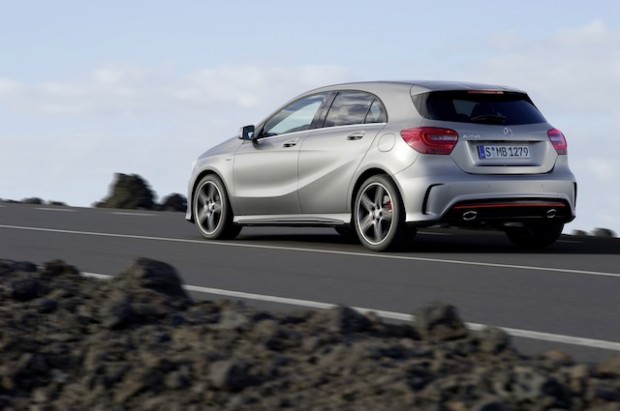 The new A-class is a convincing premium hatch and is yet another competitor for models like the Audi A3 and the BMW 1-Series. It is a lovely machine to drive and reasonably sharp when you want to make progress.
This amazing car puts Mercedes-Benz on the front foot in the prestige compact hatch class. The firm ride suits the sporty look and the standard gear makes the Mercedes best in show for value. Definitively, it could be without hesitation « My» car of the year 2013 but the year just began!