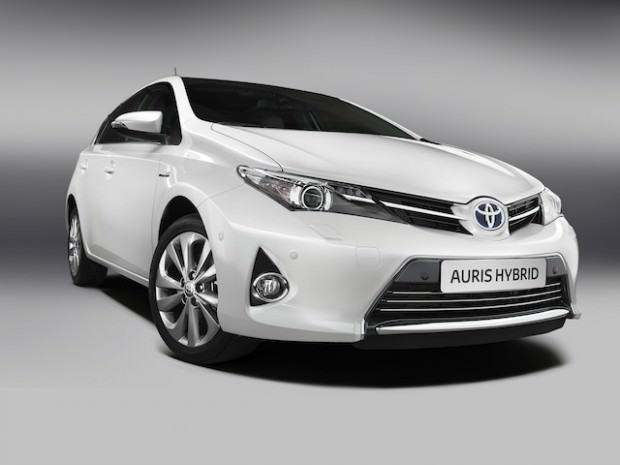 The old Toyota Auris was just a car for getting from A to B. It was well suited to its function, yet lacked any real excitement. Enter the new model, featuring a more dynamic look and, says its maker, a bit more driving fun. This week, I’m testing the Hybrid version.

Toyota decided to start with the looks. Gone is the old Auris’ shapeless, dumpy and bland styling. In its place is the brand’s new ‘keen look’ design language, which you’ll see on everything from the new RAV4 to the next-generation Verso compact MPV. 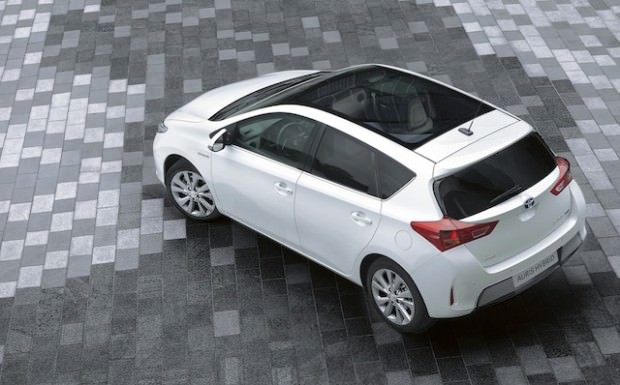 The latest Toyota Auris is noticeably lower and leaner than the model it replaces. The result is a more athletic look, with a lower Toyota badge and an upward-angled grille and headlamps that emphasize the car’s width. A rising beltline and sloping roof lead back towards chunky light clusters that help draw the rear of the car together.

Doubtless it’s meant to look aggressively athletic, an outward reflection of the careful changes to steering and suspension made under the skin, to try to make this car more poised and communicative than before. 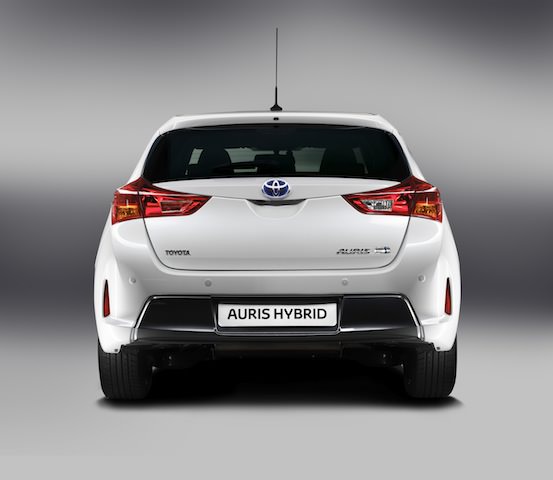 Inside, there’s been a clear focus on simplifying the design and improving quality. So you get lots of straight lines and more luxurious materials.

The driver’s seat is now 40mm lower and the angle of the steering wheel has changed. It feels a lot more comfortable and sportier than before, too, thanks to very supportive, well-bolstered seats.

There’s room enough for a couple of adults in the back, but a third is pushing it. Visibility out of the front is good, but those large rear pillars obscure rear three-quarter views, especially when reverse parking. 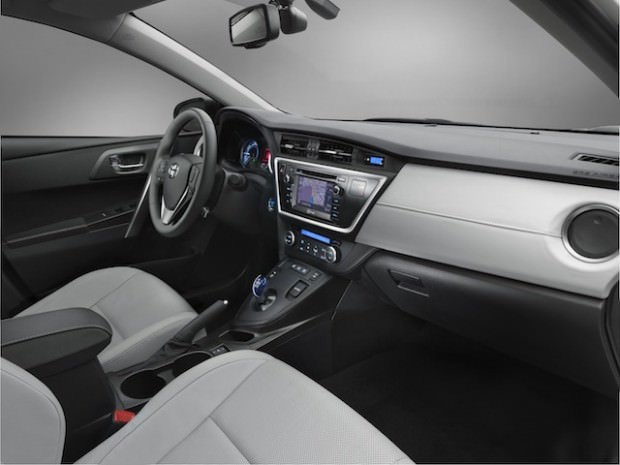 My vehicle offers a clutch of automatic systems including rain-sensing wipers that successfully sense rain, automatic lights, keyless entry, park assist, and squawking parking sensors both front and rear. It also came with Touch & Go – an upgrade that adds a 6.1-inch touchscreen, excellent navigation guidance, Bluetooth and USB connections, plus a useful reversing camera which particular help.
Still, there are a few items that manage to surprise and delight. The needle of the economy gauge will change color from bright white to glowing red as it sweeps out of the “eco” zone and into the “power” section, gently reminding you that you’re probably wasting fuel. It’s a subtle but lovely little touch! 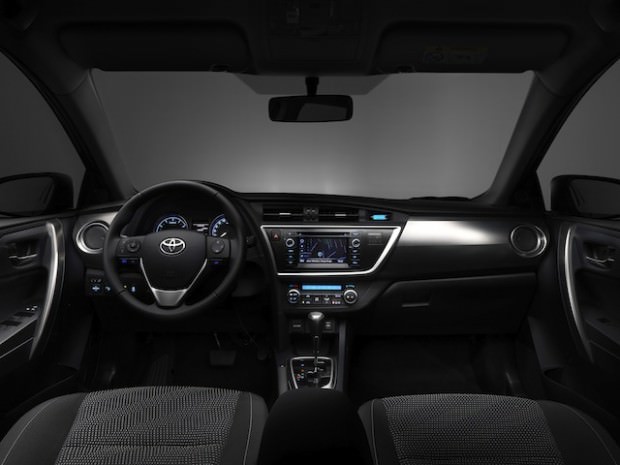 The layout of components in the hybrid system has been improved over the old Auris Hybrid, which bundled its battery into the boot, eating into luggage space. In the new model, the nickel-metal-hydride cells have instead been stashed under the rear seat alongside the petrol tank, leaving the 360-litre boot for your shopping and the rear seat backs split 60/40, folding on to the squabs to give an almost-flat load bed 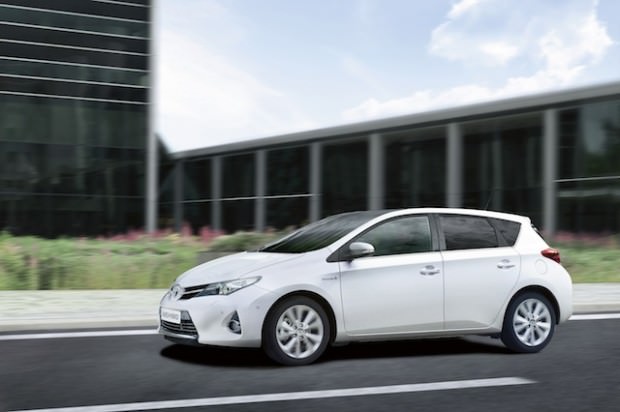 The Hybrid gives the Auras an angle that competitors lack The power plant is broadly unchanged from the previous Auras Hybrid: A 1.8-litre four-cylinder petrol engine provides up to 98bhp, with another 80bhp on tap from the hybrid electric motor. Performance and fuel economy are marginally improved and the handling is better. The ride is now supple rather than soft and the cabin feels a calmer and quieter place. The electronically assisted steering rack is stiffer and the steering feels more responsive.

The hybrid version I was driving pulled away with a low whine, but the power delivery, slightly jerky on the old model, is much more linear. Drive the Auris Hybrid through some corners and it feels instantly more impressive than the old car. Body control is good and there’s a bit more weight to the slightly more responsive steering getting from rest to 100KM/H takes 10.9 seconds

At low speed, or when setting off, the engine is typically silent as the car makes progress on electric power alone. 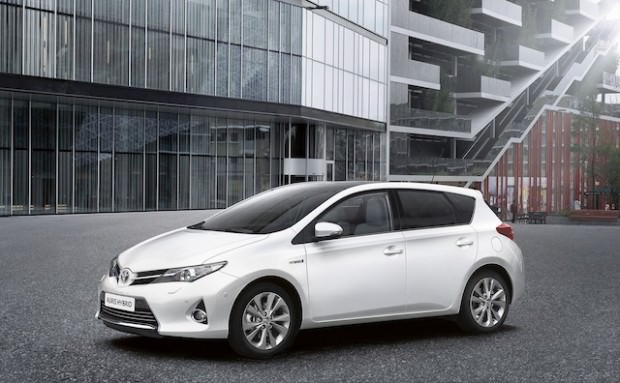 If you end up in the wrong lane at the head of a traffic-light queue, for example, you can outsprint most other cars over the first 50 meters to sort yourself out, get in the right lane, switch back into normal mode, and relax.

There is also an “eco” mode that softens throttle responses noticeably. It is perfectly tolerable, even around town, as long as you’re in a Zen frame of mind. It makes a big difference to consumption too. 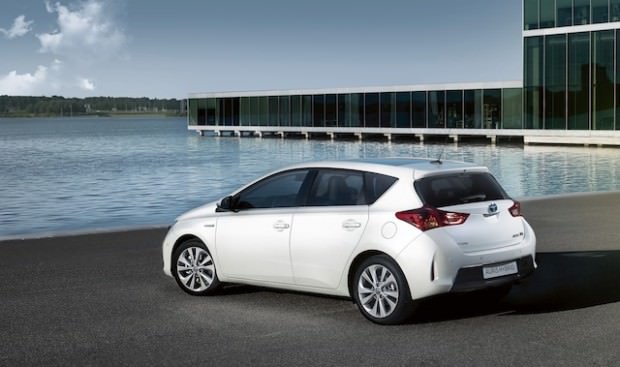 Driving the Auris you can feel that this car is very well built .The Auris is also well priced, affordable to own and backed by a five-year warranty. Even looking beyond the hybrid running gear, this Auris brings a lot more to the party. It’s a whole lot better looking than before, with much more considered detailing. If you feel like dipping out of the rush hour rat race, the Toyota Auris Hybrid makes a very attractive and safe oasis in the city traffic.