Volkswagen’s all-new, seventh-generation Golf went on just few months ago. After 39 years and 29 million Golf sales, make no mistake: the Golf is the center of the Volkswagen brand, one of the most successful cars of all time, a true icon! Longer, wider, lower and with very high comfort levels, the new Golf deserves to be rated in the premium market with some of its fellow German competitors. 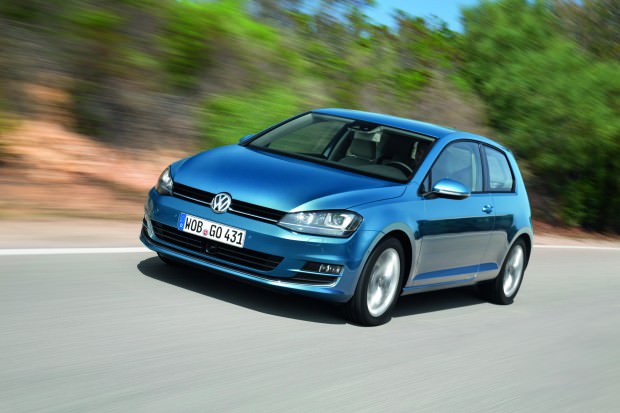 The seventh generation is so refined, so grown-up, so classy! That’s because it’s based on remarkable new hardware, the VW Group’s ‘MQB’ chassis architecture, which also underpins Audi’s new A3 (and many Audis, Seats, Skodas and other VWs to come). Today, I’m testing the new Golf, the 1.2 TSI 105hp DSG version.

This seventh remix of the familiar Golf recipe looks very similar to the outgoing incarnation. However, it would be a mistake to think that the new Golf offers much the same as the old. Look closely and the styling is distinctly sharper, cleaner, and better.
About its design, the new Golf VII comes with a longer wheelbase by 59mm with the cabin space stretched to offer more cabin space in front as well as the rear. It looks more sporty than the Golf VI. The car is lower, and the ride height is also lower by 28mm offering better headroom and also legroom. The boot space has been increased by 30 liters while a low sill makes loading much easier than ever.

In bringing the latest Golf to market, the order of the day for WV was perfection and this newcomer bristles with quality, not only in terms of finish, but also in build quality and handling.

The layout of the cabin is better than ever, it has been redesigned and includes a new generation of touch screen infotainment systems.
This 5.8-inch touch screen navigation system comes with added functionality and a proximity sensor. Let me explain. You can now just move a finger near to the touchscreen and the system automatically switches from display mode to input mode.
The display mode shows a screen that is reduced to just the essentials. In the operating mode, on the other hand, the elements that can be activated by touch are specially highlighted to simplify intuitive operation. The display also have a function that lets users scroll through lists or browse CD covers in the media library with a wipe of the hand and allows the driver to select the desired drive mode Comfort, Normal, Sport, ECO and Individual with just a swipe of the finger. There is also an electronic parking brake (just a button to activate) and this frees up more space in the center console. 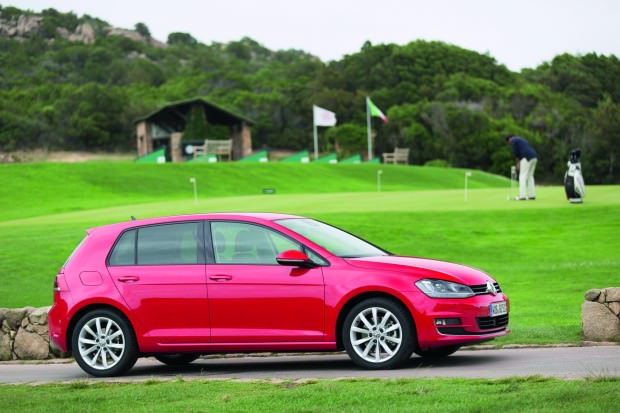 The interior is extremely comfortable, artfully restrained in design and pleasant to touch. It won’t surprise you that the interior of the new Golf looks conservative, but it is superbly put together, and the surface qualities would put a few luxury cars to shame. Once again, VW has played the quality card, and once again it turns out to be a trump.

A black cyclops eye provides radar-based cruise control (which will break and accelerate to keep pace with the car ahead, at a distance the driver can adjust via wheel-mounted buttons. I tried it, it works, but it can feel quite unnerving until you get used to it! 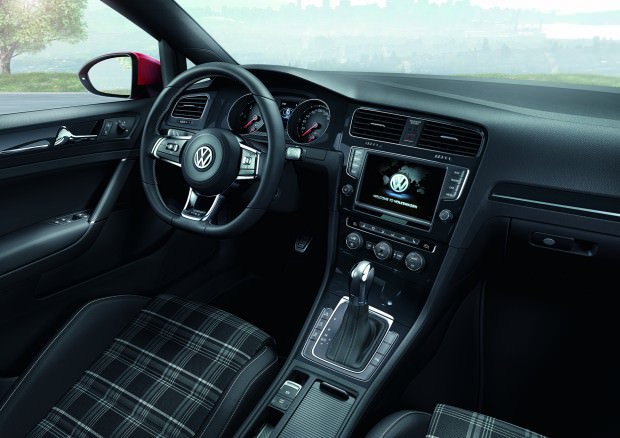 Every model comes fitted with automatic stop-start, a trip computer with shift hints, and energy recuperation in the form of an alternator that charges the battery mostly when the car is slowing down.

Travel safely is equally important – the body structure of this model is much stronger and there is a raft of standard and optional passive and active safety systems. A new multi-collision brake system is part of the package and a PreCrash system is also available. 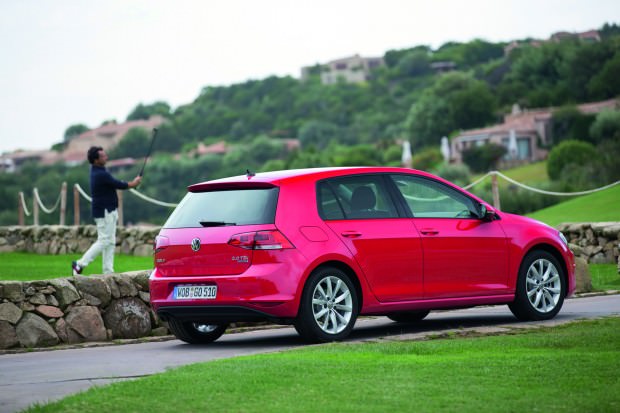 Frugal and quite fun to drive, the new Golf is lighter than the outgoing model and combined with the new range of petrol and diesel engines, this plays a major role in fuel saving.
About the engine, you can choose between the 1.2TSI, the 1.4 TSI, the 1.6 TDI and the 2.0 TDI. The choice between petrol and diesel is harder than ever, as the gap between them in terms of efficiency and performance is closing. But in either iteration the new Golf is both a great highway cruiser and an entertaining B-road bruiser. 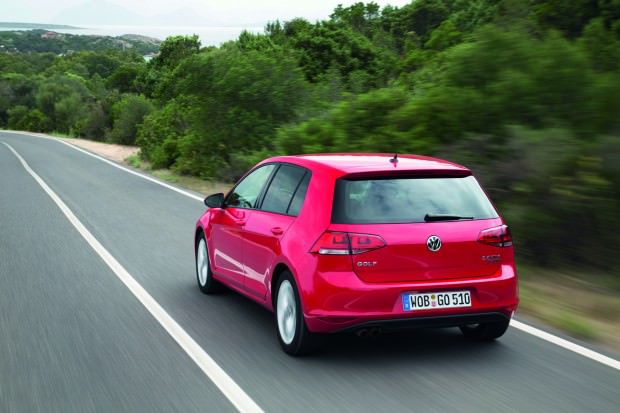 The car is more than 100kg lighter now and has a more efficient engine that comes with a 2-cylinder de-activation system. Let me explain how it works: under 30km/h or so the 2nd and 3rd cylinder goes off (sleep mode) to offer the fuel consumption of a 2-cylinder car and the 1st and 4th cylinder only works. At highway cruising speeds of 130km/h and more the same principal applies and this returns almost hybrid like fuel efficiency.
This car is really better to drive as the steering feel is more direct and returns more feel to the driver. The handling is also much better.
For the first time there is a driver profile selection which allows you to choose from four modes, Eco; Sport; Normal and Individual. 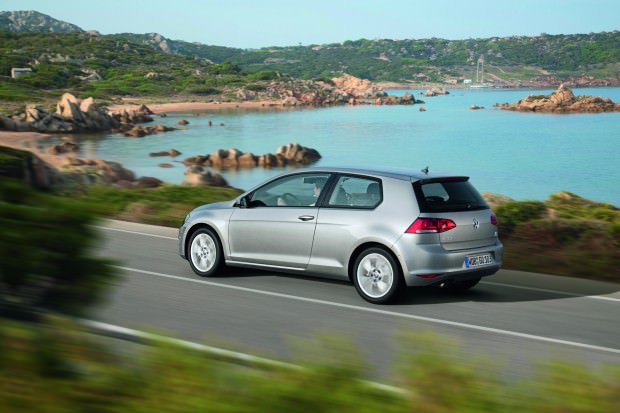 My test vehicle – a five-door model with six-speed manual gearbox – is rated at 114g/km, which is not at all bad given that it can also sprint to 100km/h in just 11.6 seconds.
If you’re thinking a 1.2-litre engine is more suited to a city runaround than family hatchback then you’ll be pleasantly surprised. Thanks to turbocharging, it has a decent amount of low-down pull and revs smoothly beyond 5000rpm. 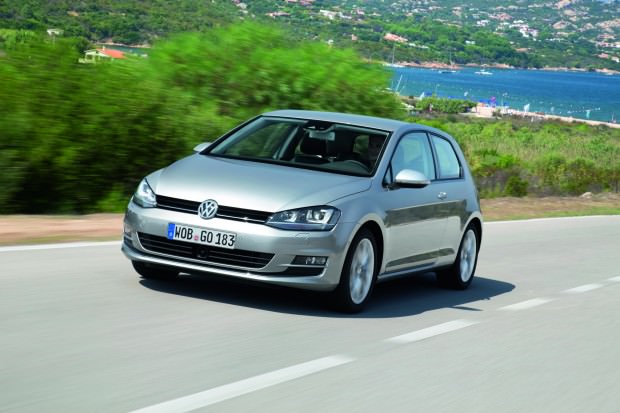 Only when you pull out to overtake at relatively high speeds will you wish for a bit more urgency. With decent body control, strong grip and consistently weighted steering, this Golf is great to drive in other respects, too. It’s also impressively frugal featuring BlueMotion technology (stop/start with brake energy recuperation) that is now a standard feature across the range.

The new Golf has gained a selection of driving modes for the first time; Normal, Sport, Eco or their own personalized setup will need to do so by feel, because the button will usually be playing peek-a-boo behind the gearstick.
The changes are noticeable but subtle compared to some other cars I’ve tried, and I’m happy to write that Eco mode felt very natural and tolerable, while Sport produced pleasantly sharpened responses and increased eagerness. It’s also a welcome bonus to be able to mix and match settings to your liking with the Individual mode, adjusted via the car’s central touch-screen.

There is no doubt about it: the Golf VII hits bull’s-eye. It is everything I expected, and more – a surprisingly rewarding driver’s car, more refined than any of its rivals, very comfortable and compliant, and a roomy, quality piece of kit.