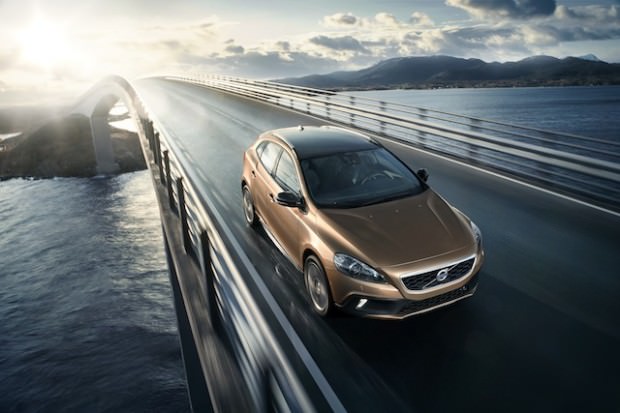 If you’re looking for a compact luxury crossover take a look to the Volvo V40 Cross Country. The Volvo V40 Cross Country is aimed at those who like the idea of a Volvo with a sense of adventure.
It’s based on the V40 small family car, but with some extra body cladding to give it a more rugged appearance, and it takes the fetchingly hunched look of the original and adds underbody cladding, or as they say in the countryside, “Goat deflectors”. 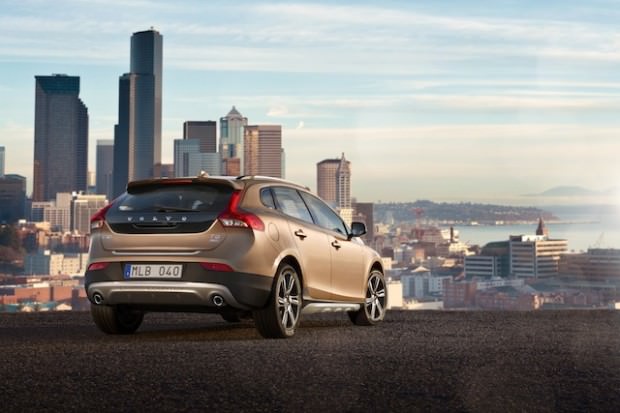 The V40 Cross country is about 40 mm higher than the standard V40 and should that sense of adventure include the desire to traverse a field. It is obviously based on the standard model, but features a number of elements that will differentiate it from its standard counterpart.

The V40 XC is distinguished by a new front end with a dark, contrasting bumper, honeycomb mesh grille, and upright DRL-lights.
There is also an anodized, black high-gloss frame around the greenhouse, black rear-view mirror housings, and sleek rails floating over the roof. Towards the back of the Cross Country, there is a contrasting rear bumper with an integrated skid plate. The model sits on a new set of 19″ light alloy wheels. 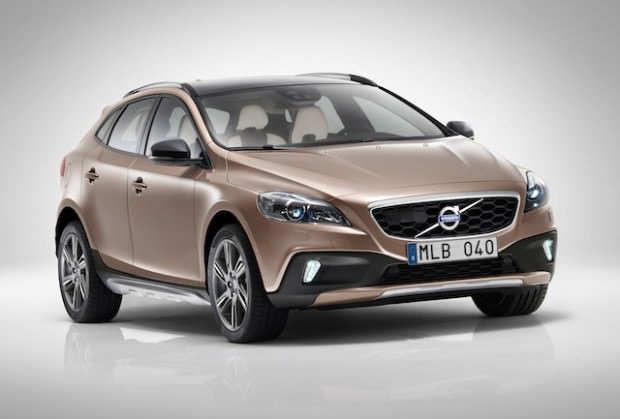 For the interior, the new Cross Country has received enough room for five passengers and comfort is derived from the leather upholstery. The rear seats can be folded to increase cargo space and the front passenger seat can also be folded down to fit longer objects in the vehicle.

The Volvo also comes with a Parcel Shelf Net for the storage of smaller items and a Load Organizer that includes a load compartment divider, a load belt, and two floor rails. 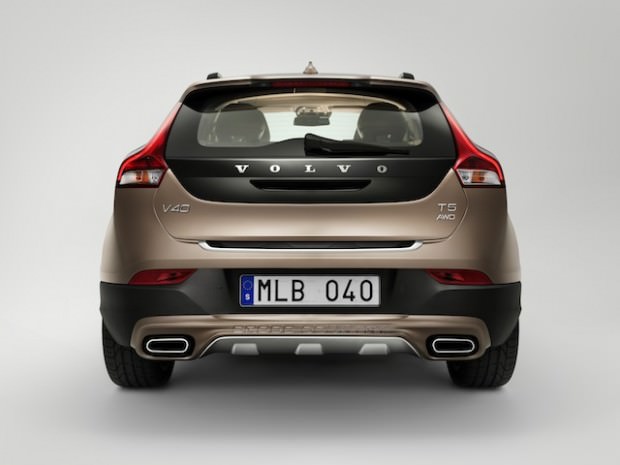 The storage continues with what Volvo is calling “smart storage.” This consists of a storage compartment below the armrest that is great for CDs and the connector for a USB/iPod, the extra space in the glove compartment for two drinks – cans or bottles -that can be kept cool with cold air from the Electronic Climate Control system, and a specially designed, drained storage unit for an ice scraper in both front door panels for those cold, wintry months. 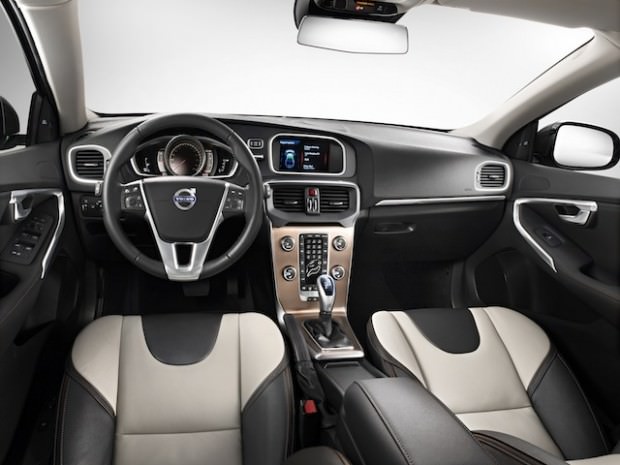 Interior lighting was also a point of interest for Volvo, evident in the “theatre lighting” feel of the cabin which was accomplished with the use of strategically placed LED lamps.

The driver can enjoy a red-to-blue setting that adapts the light to the interior temperature, or choose between another seven mood themes. There are also reading lights in the front and rear that can be dimmed. 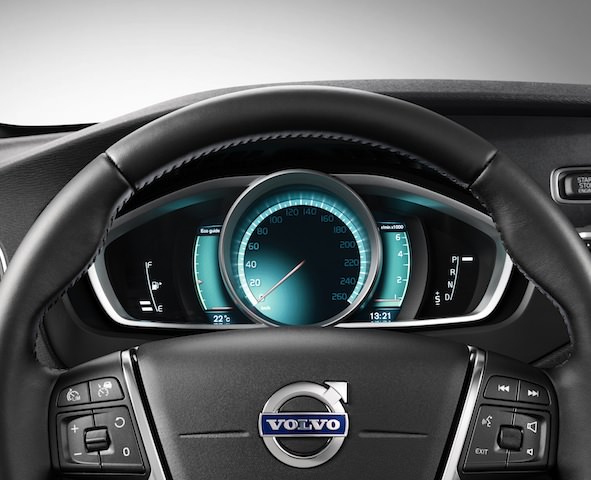 The Volvo XC has a lot of safety features, in the classic Scandinavian way. The V40 offers you top of the line security equipment and lots of features that are specially designed to keep you and the people around you safe (auto-braking systems, drowsiness detection, cruise control with distance control, etc). City Safety auto-braking technology, and the V40’s world-first pedestrian airbag, all which come standard.. 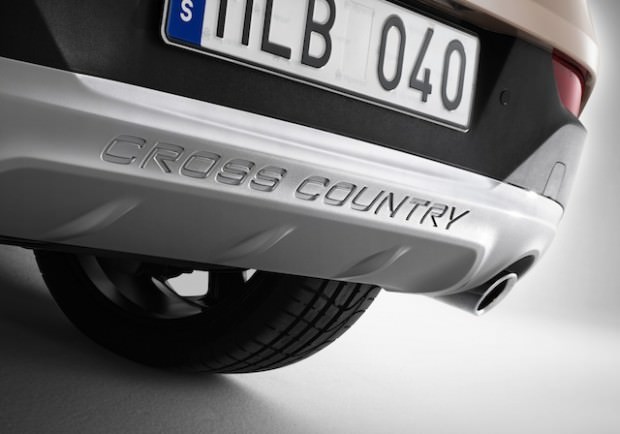 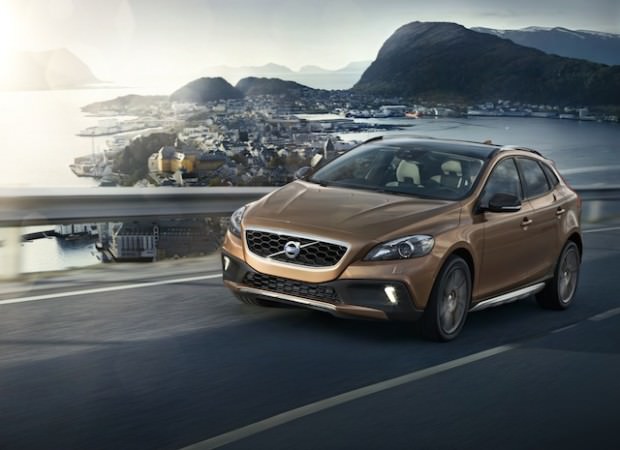 Diesel fans will also get their choice of engine with a five-cylinder 2.0-litre D4 turbodiesel with 177 HP or a 2.0-litre D3 producing 150 hp, each mated to either a six-speed automatic transmission or six-speed manual gearbox.
Customers interested in their vehicle’s fuel consumption can opt for the D2 version which is powered by a 1.6-liter diesel engine that delivers a total of 115 HP and an impressive fuel consumption of just 3.8 l/100 km. 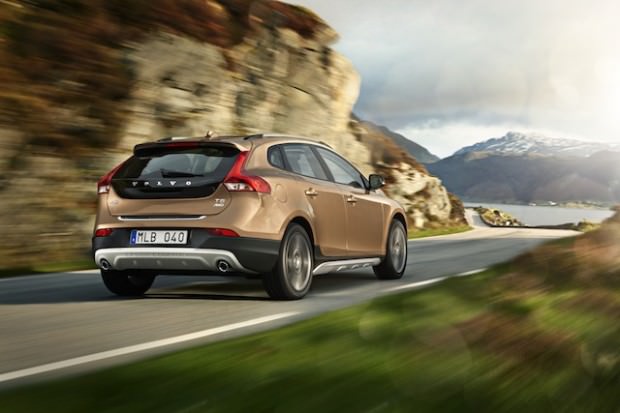 After few kilometers in urban traffic, I discovered that the V40 was bristling with collision warning systems, and if anything solid moves into view a buzzer sounds and the dashboard lights up red as if you had just tilted a pinball machine. Fantastic!
Once up to a typical motorway speed, the V40 Cross Country bowls along nicely, easily keeping up with the ebb and flow of traffic. 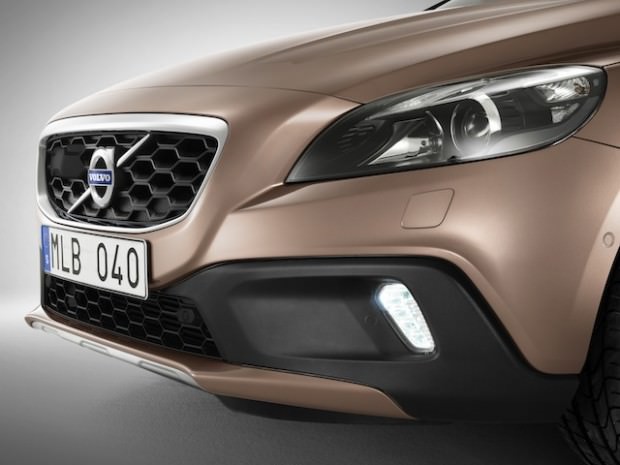 That’s no hardship from my experience of the V40 Cross Country on roads. It can offer up an additional of ground clearance, depending on the wheels and engine combination, which is just enough to give it some extra off-road attitude. It’s also just enough to lend it some limited off-road ability, though this soon runs out beyond a muddy track.

If you do live at the end of mucky road, the only V40 Cross Country that has four-wheel drive fitted is the T5 model. This offers good traction, on and off the road, and it has Hill Descent Control as standard. However, it’s on the road where this model proves its worth. 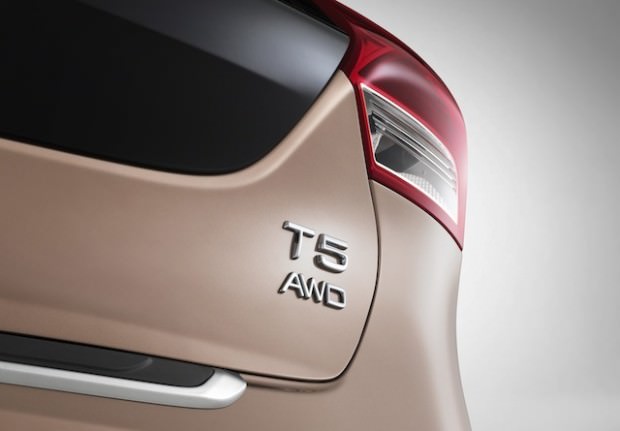 Using the V40 XC for a while will reveal that this car is actually more of a hatchback than a wagon. It has a small cargo area and the backseats are cramped and offer little room.
The V40 XC gives you a lot of driving fun and is versatile, reliable and offer good value for the money.