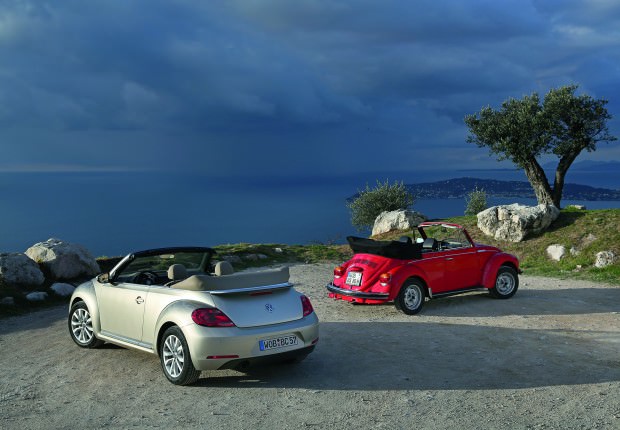 It was raining in Brussels when I got the new Beetle Cabrio for a week test. At least it gave me an opportunity to test the weatherproofing of the new Volkswagen Beetle Cabriolet, the third such model since the 1949 air-cooled Type 15, which sold 330,000 in 31 years. This third generation features a sportier and more dynamic silhouette – just like with the coupe version and is equipped with a traditional soft-top that can be opened and closed just in 10 seconds at the push of a button at speeds up to 50km/h.

As you might expect, the rain stayed outside while I drove through the city traffic and join later on the highway for a trip to the North See cost.

Later in that day the sun showed up and I finally be able to enjoy my new Beetle cabrio. So beautiful and so chic with the roof down and personally, driving a chick car doesn’t bother me. 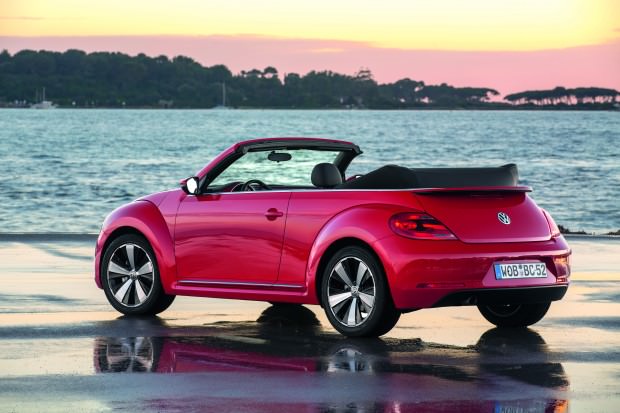 The new Beetle Cabriolet is longer, lower and wider than its predecessor, with a longer wheelbase. Volkswagen’s mission for the new Cabriolet – and they aren’t being shy about it – is to make the new car manlier. That battle is being primarily fronted by the hardtop version of the Beetle, which presents a chopped-and-channeled look that, is made for men. But what of the Cabrio? I think the new Beetle Cabrio is the perfect car for a gay man, isn’t? 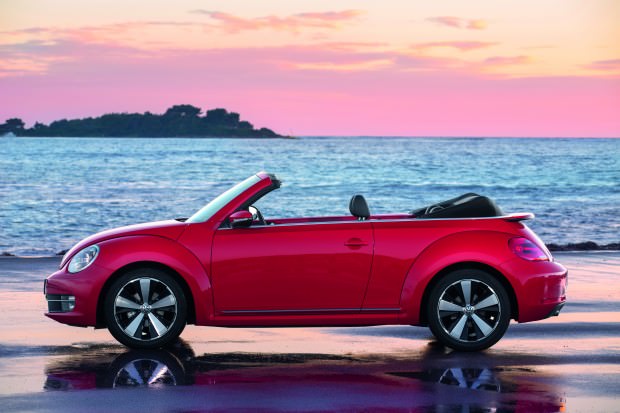 The car gets the same longer front bonnet, a shifted back front windscreen and a much steeper incline. The headlamps are also new and they are featuring bi-xenon technology.

On the interior the model comes with body-color dashboard and the stylish gauges and trim. The cabin can easily accommodate four passengers and their luggage. The rear seats can be folded down in order to increase the practicality even further.

I talked already earlier this year in detail about the Beetle’s interior in my 2013 VW Beetle hardtop review and as it’s the same, check the details here. 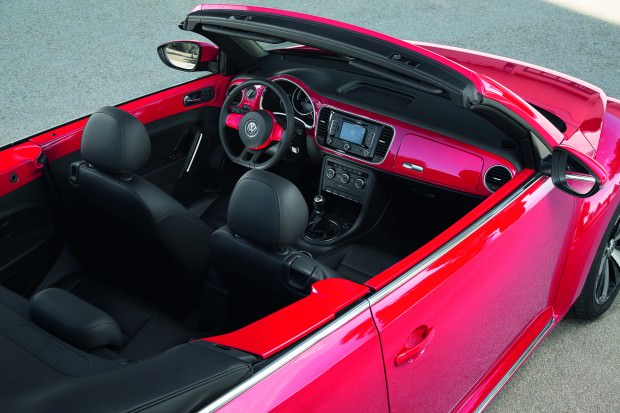 I love the comfortable front seats and the simple control layout. Those who have driven the old Beetle Cabriolet may remember the acres of dashboard that sat between the driver and the windshield. The quirky vase to keep flowers on the dash has long since gone – it is all slick and functional now, but this is still a car with bags of character.

The new car puts the glass closer to the driver, which makes it less disconcerting to drive and easier to park.

The entire roof system folds into a very compact space, meaning that even with the top down the boot volume remains at 225 liters. 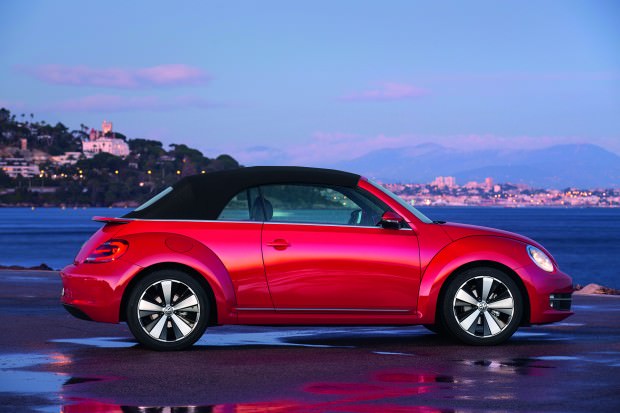 The power top operates with one switch, with no latches to skin your knuckles. My Beetle Cabrio tester came with a wind blocker that installed easily and, with the side windows up, kept the cabin quiet and mostly turbulence-free. Best of all, the blocker folds up and stows away on a nifty storage shelf at the top of the trunk, so it doesn’t eat up precious cargo space. 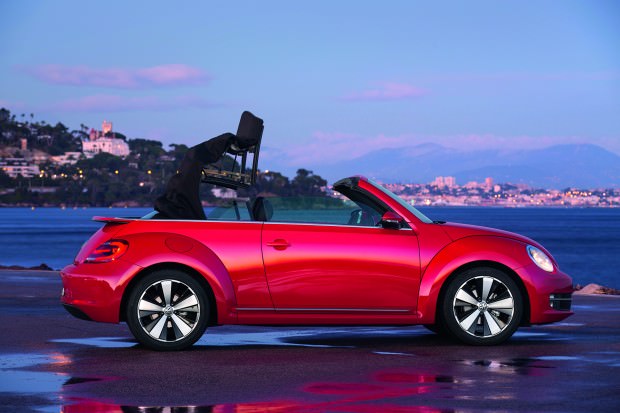 Gearboxes are five or six-speed manuals or six or seven-speed DSG units. Beetle Cabriolet, Design and Sport are the three trim levels on offer, and three special edition models were created for the launch – the stylish ‘50s Edition’, the cool ‘60s Edition’ and the ‘70s Edition’, which come with bespoke styling elements.

Specification levels are high – all models come with air conditioning, an RCD 310 CD system with a DAB radio, rear Isofix points and a rear spoiler. 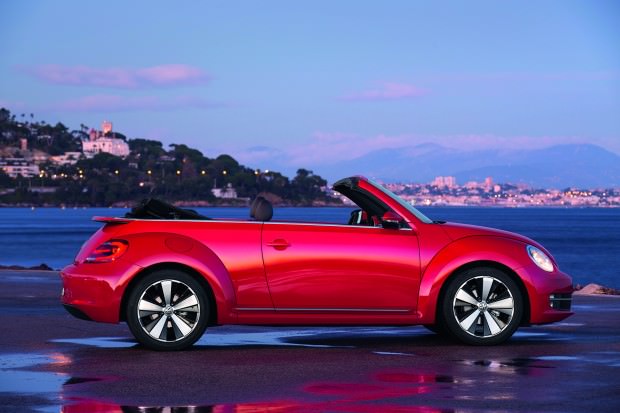 The ride is firm with a nice balance between comfort and handling. In many different situations, I always was very impressed with the driving experience. 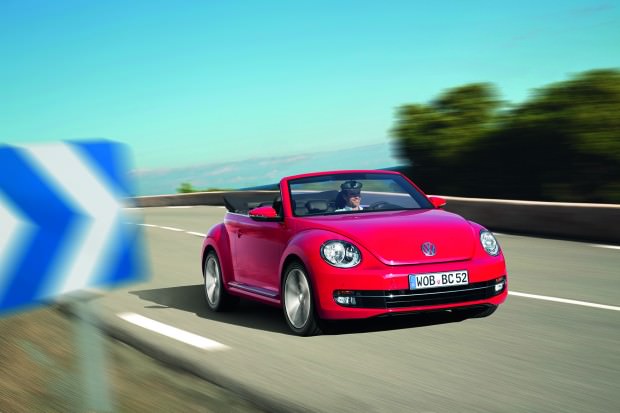 What I like best about the Beetle is that it is more than the sum of its well-designed parts. The 2013 Volkswagen Beetle Cabriolet is one of the least-expensive convertibles you can buy and really pleasant for a daily driver. 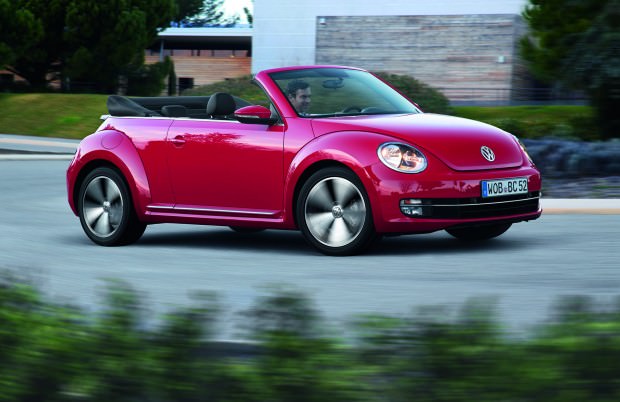 Has the Beetle Cabriolet shed its chick-car image? It certainly didn’t make me look any manlier; granted that’s a rather tall order. But does it really matter? 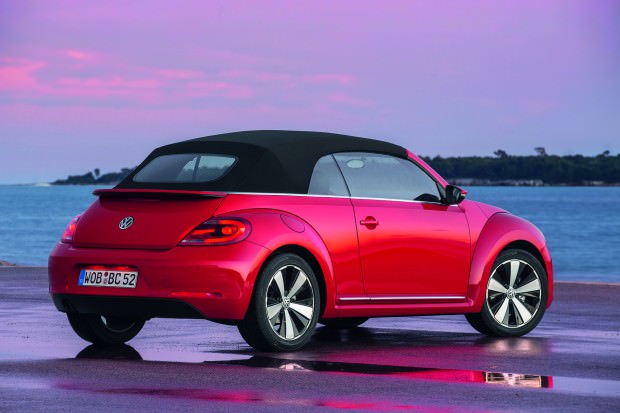 After a weeks of hot, sunny weather I enjoyed it in what turned out to be one of the best convertibles I’ve driven in a quite a while. And I got a huge fun and even more important a nice face tan!

This is definitely an ‘old-school’ classic that makes people smile. And that has no price!