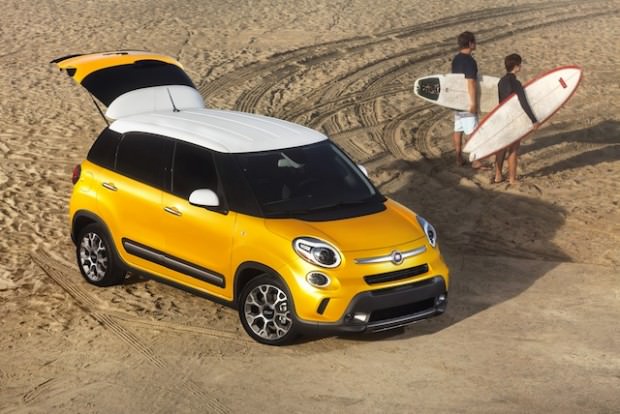 Let’s start with a quick recap. In 2001 BMW launched the “new” MINI, and, largely due to its classless retro cuteness, it sold like hot cakes. Six years later, Fiat served up its “new” 500. It too has been selling extremely well, even eclipsing MINI sales since 2008.

Then in 2010 BMW added a string to the MINI brand’s bow with the introduction of the larger and more capacious Countryman. The Countryman is a completely different car from the MINI hatch, but it looks like it’s related and it is branded MINI. 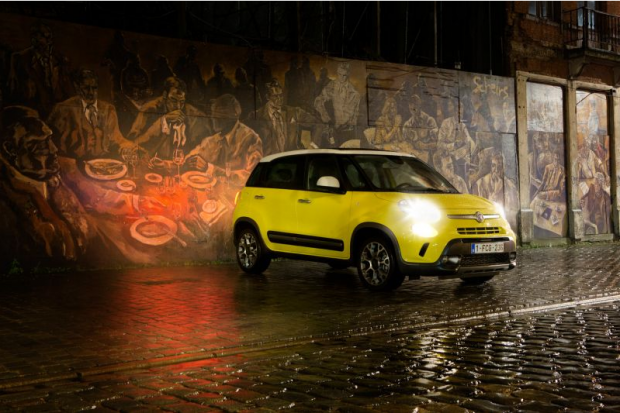 In response, and not before time, Fiat retaliated in 2013 with the larger and more capacious 500L. It too is a different car on a different platform and built in a different factory, but no one would pretend that it looks anything like the 500. However the L version is badged and marketed as a 500. It looks like a giant 500, but the 500L is a completely different car. 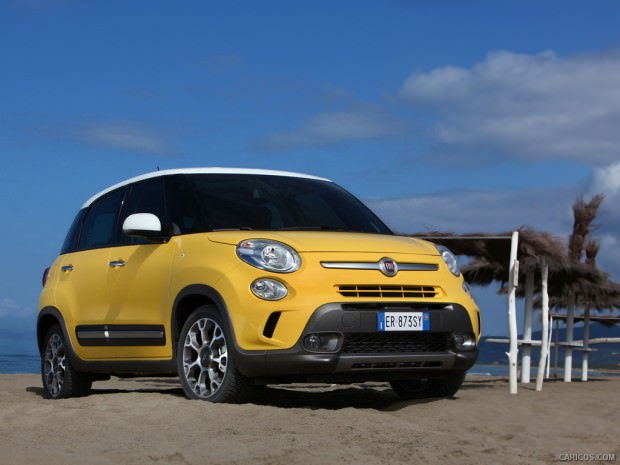 So the Fiat 500 is now city car, family car, convertible, seven-seater (in the shape of the 500L) and even a crossover, in this 500L Trekking variant. The Fiat 500L Trekking is designed to offer the looks – and some of the off-road ability – of a 4×4, but for less money. 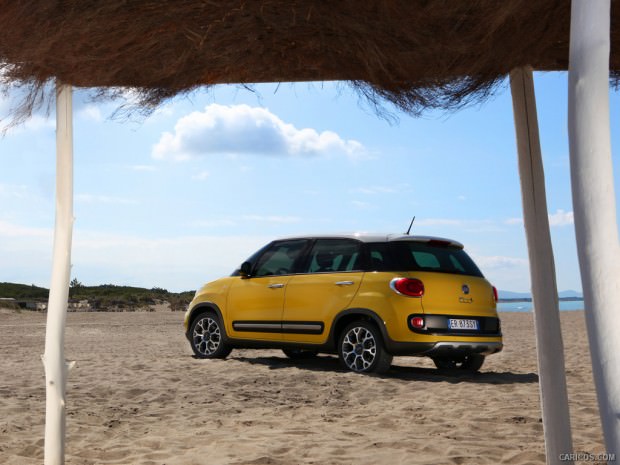 Mechanically, it’s near-identical to the standard 500L, although it does get an elevated ride height and chunkier styling.
Not so much a vertical move up the feature ladder as a lateral nod to those with active lifestyles, the Trekking trim employs the Easy’s content and options, but fashions itself for the kayaking and mountain-bike crowd. Most of this is done with unique fascias and styling cues, plus a few key interior trim items. The idea behind the Trekking is a more aggressive, premium look. 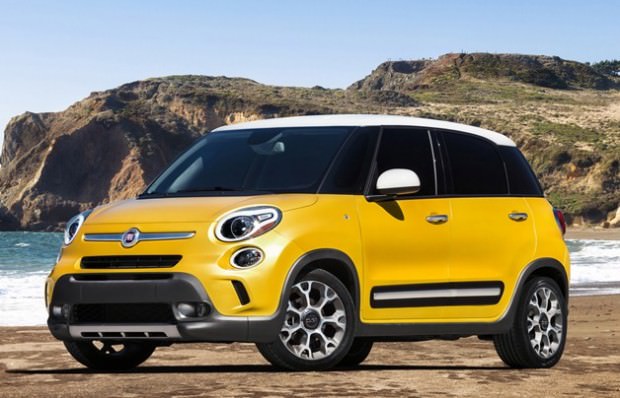 Fundamental to the 500L’s personality is its tall body. It gives generous headroom and allows for an upright seating position, which delivers FIAT’s goal of an open, airy cabin. This feeling is greatly aided by the expansive sunroof, which helps to “transform the car interior into a patio” as designer Fabrizio Vacca puts it.
Although not a 4×4, the front-drive Trekking features butch bumpers, side skirts and mouldings, air intakes, a skid plate, foglights, 17″ alloy wheels with Mud and Snow tyres, retuned suspension with a 13mm higher ride height, privacy glass, “high-tech” seat upholstery with “eco leather” inserts, a Traction+ system and City Brake Control all as standard. 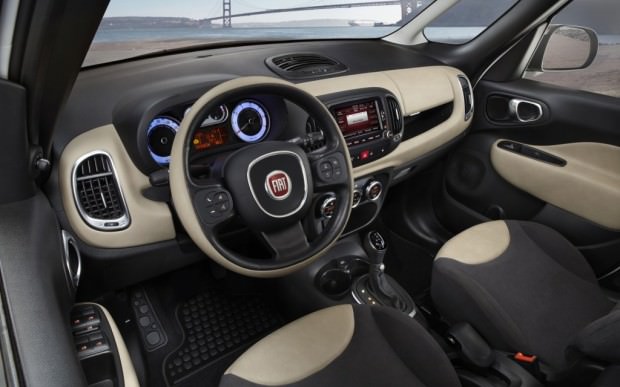 Fun, Italian design features are found throughout the cabin. There’s a large, chunky steering wheel, a body-colored dashboard and tough but appealing interior trim that gives the cabin plenty of appeal, while the five-inch touch-screen that controls most functions is simple to use.

FIAT also gained front-seat roominess and some clever cubby and storage compartment design. Many of these are simply styling cues, but others, such as the sliding rear seat, offer practicality, especially when optimizing for rear cargo room.

On the plus side, there’s plenty of head- and legroom for rear passengers, and three adults will be comfortable enough across the rear bench on shorter journeys. 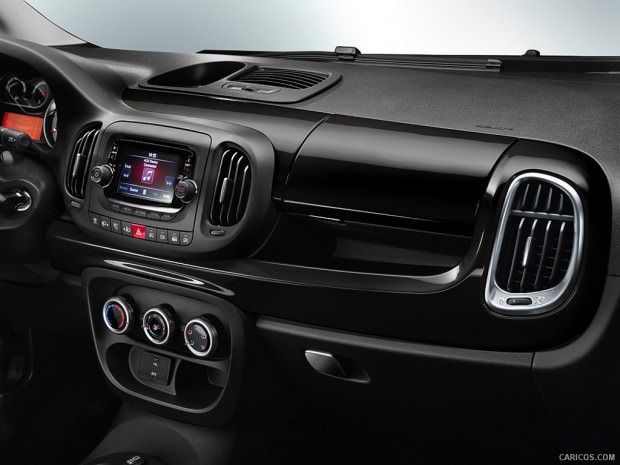 An adjustable boot floor lets you raise the loading height, so you’re less likely to strain your back when lifting out heavy luggage. The 412-liters boot can be extended to 1,375 liters if you fold all the seats down. The 1.3 MultiJet is available with Dualogic 5-speed robotized automatic transmission which improves not only driving pleasure, but also fuel consumption* and emissions (109 g/km of CO2 in the combined cycle).

Modern, smooth and easy to rev, the MultiAir Turbo 1.6 provides a good compromise between power and fuel economy. It seems to have just met its weight match with the 500L. It comes with Start&Stop and extraordinary drive torque (320 Nm at 1,750 rpm) enhanced by the 6-speed gearbox for low running and maintenance costs.
The 500L with this engine gets from 0 to 100 km/h in 11.3 seconds and has a top speed of 181 km/h. 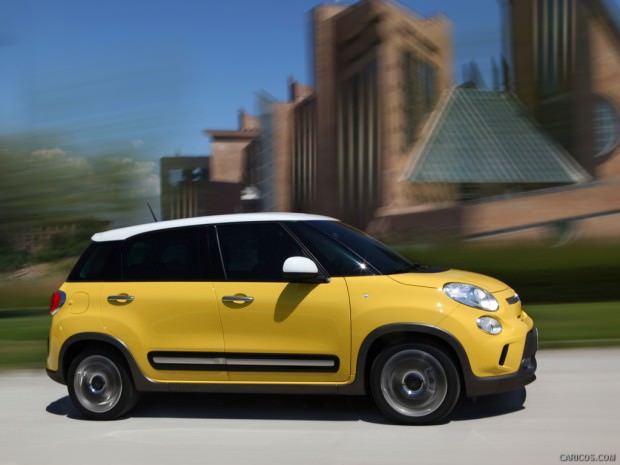 I drove the 106bhp 1.6-litre Multijet diesel model with a six-speed manual gearbox. The engine is flexible and strong enough to offer good performance in town and relaxed progress on the motorway, but it’s very gruff when you put your foot down.
The manual gear box is an easy, pleasant shifter, so transmission choice comes down to personal preference.

Like the regular 500L, the Trekking rides comfortably with a light load and on generally smooth-surfaced Belgian roads and steer with adequate precision. The brakes have good feel and power.
Its lower-profile, all-weather tyres mean it’s not quite as comfortable as the standard car, but it’s still more settled than mini SUVs, such as the Peugeot 2008 and Renault Captur. 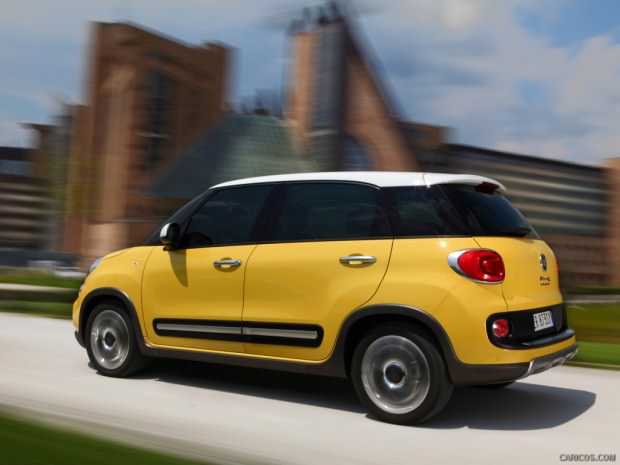 If you need to traverse poor surfaces on a regular basis, the Trekking is better equipped to cope, thanks to those all-weather tyres, better ground clearance and a more sophisticated traction control system. Just don’t expect to go too far off-road; this is still a front-wheel-drive car.

More impressively, the 500L Trekking comes with a low-speed collision avoidance system that can automatically apply the brakes to stop you running into the car in front. And it’s work, believe me… but it’s better to not twit when you’re driving. 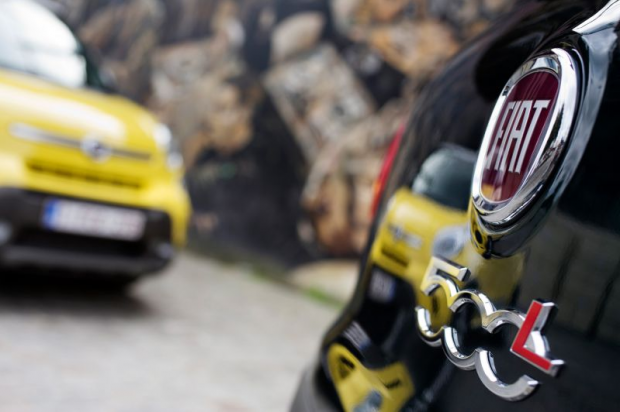 The reason to buy a 500L is the Italian flair that emanates from its bones. FIAT sees the 500L as a multiuse vehicle, a sort of non-SUV sedan, but one that is still fun, utilitarian and obviously a vehicle. This car has been created to be seriously unserious while providing all the stuff you needs to get the job done when it comes to any journey. This car should also be also commended for its quietness, fit and finish, and refinement.
Each day, the 500L Trekking might bring you to unknown territory, just waiting to be explored with agility. This car offers a free spirit with two perfectly fused souls which love to play off one another every day: one metropolitan, for breezing through the city, and one more adventurous, perfect for those little weekend pleasures that make life worth living.