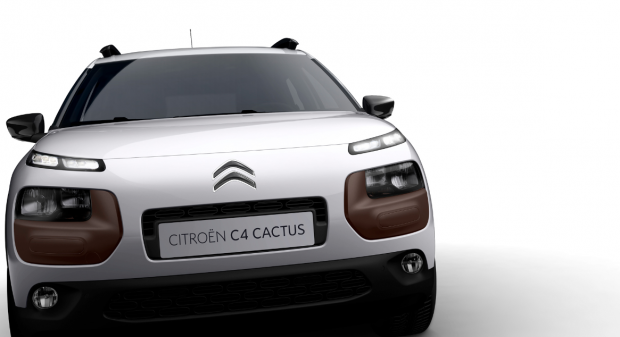 Citroen has a long history of building cars that are both quirky and appealing.
The new C4 Cactus has been designed to continue that trend, with a simplicity to its design and build that makes it lighter and cheaper than rival hatchbacks. In fact the new Citroen C4 Cactus crossover will take on the Nissan Juke, Renault Captur and Opel Mokka in both style and value-for-money stakes 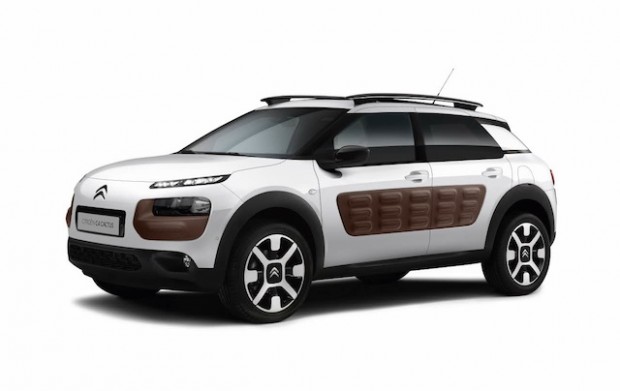 It has an unusual design and certainly stands out from the crowd, especially in some of the brighter paint hues.
The bold exterior styling is a fresh alternative to the standard hatchback and the ever growing number of crossovers on the market. The front end takes some inspiration from the C4 Picasso, with high-set LED running lights, while the main lights are part of large plastic housings, and the air intakes are positioned low on the nose. Further back, the rounded wheelarches feature plastic extensions, and behind this the sides of the car incorporate one of its big talking points – the Airbump panels. 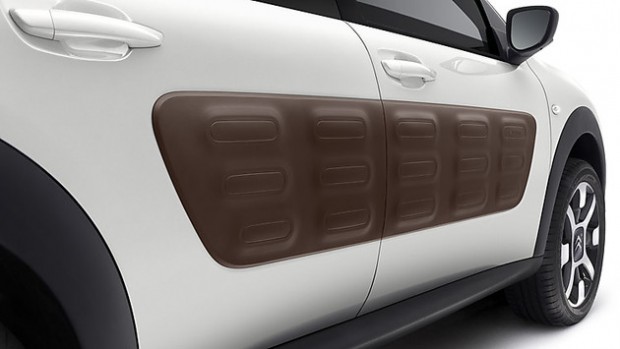 These are tough air-filled polyurethane panels designed to protect against car park scrapes and dints. It’s a bit like bubble wrap. Citroen reckons you could run a shopping trolley along the side of the C4 Cactus and the Airbumps will save it from damage. I’ll leave that to someone else to try… 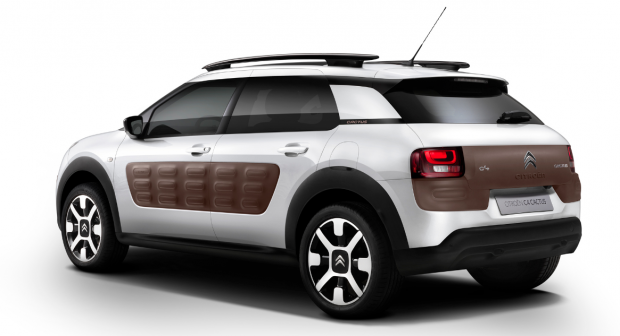 There are four colors available and you can also change them, allowing you to freshen your car’s appearance over time. It’s really cool!

Other design highlights include the substantial roof bars, while the optional red wing mirror housings and C-pillar stripes add a bit of color.

The clean surfaces are broken up by Airbump panels. In the name of saving weight, the folding rear bench is a single piece and the rear windows pop-out instead of opening, but the use of a seven-inch touch screen to control all the air-con, infotainment and vehicle function means the interior feels far from basic.
Those C-pillars look thick from the outside, although they don’t spoil over-the-shoulder visibility. 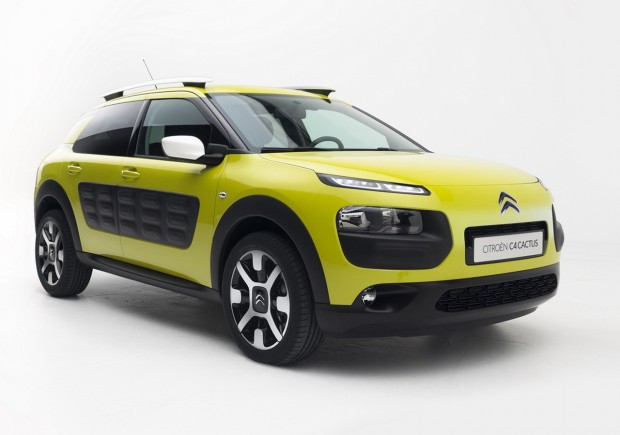 The interior is as style-led as the exterior with an elegant and minimalist design that’s inspired by luggage and travel. It has a bespoke and boutique feel that’s unlike any other car on the market with nice features such as the leather straps for door handles. There’s also plenty of space thanks to a thin dash design and the option of a front bench-style seat.
Citroen has included some useable technology too, with a simple digital instrument display which not only looks great but is easy to read. The rest of the cabin is very simply laid out, with an iPad-style touchscreen on top of the centre stack. It features such as Mirrorlink, where you can access phone apps and the internet via the display. 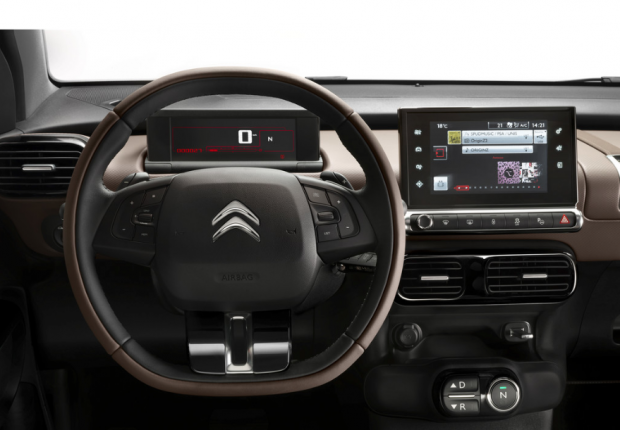 Even the upholstery is outside of the ordinary, with fluffier fabrics used in some places instead of the usual materials.
There’s loads of room up front, especially as the front passenger airbag has been relocated to the roof, making way for a cavernous front glovebox while allowing excellent front legroom. 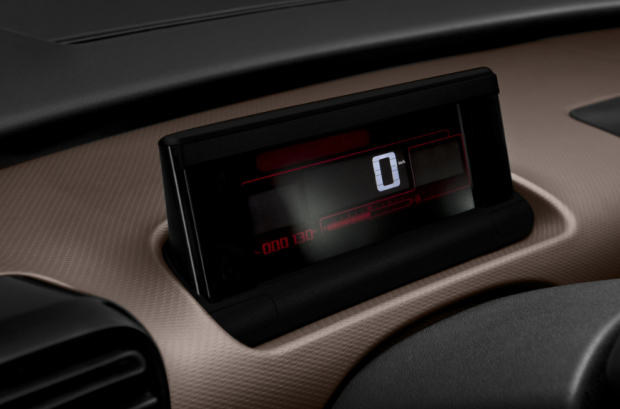 The seats are covered in a thick, premium cloth and while the driver’s chair has loads of adjustment. The wheel is wrapped in leather and has a gloss black lower spokes, while splashes of piano black and silver adorn the textured dash.

In addition, the rear seats only fold down in one piece, rather than splitting in two to let you carry longer items and a single rear passenger at the same time. And even when they’re folded, they don’t lie completely flat. 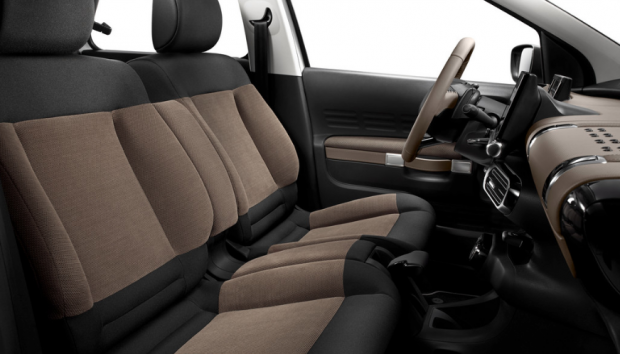 Three specification levels are available, called Touch, Feel and Flair. All come with the touchscreen, a DAB digital radio, a USB socket that lets you connect up your iPod, and cruise control.
However, you have to upgrade to Feel to get air conditioning, a leather steering wheel, a Bluetooth hands-free phone connection and smarter interior trim, including gloss black accents and body colored door handles.
Flair, meanwhile, adds climate control, automatic lights and wipers, satellite navigation and LED interior mood lighting.

It hasn’t escaped Citroen’s notice that personalization is a great way to attract buyers in today’s market. So for the C4 Cactus you can choose from 10 different paint colors, four contrasting Airbump colors, five different seat fabrics and three different color schemes for the dashboard and interior trim. 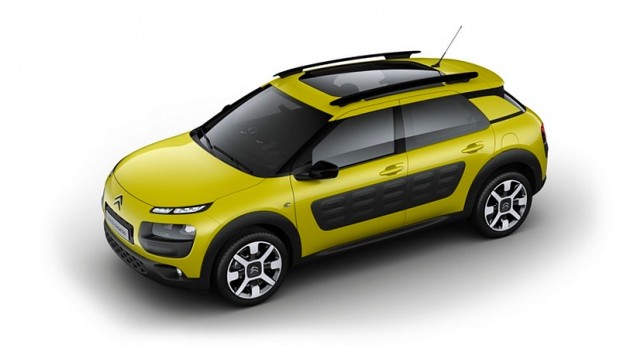 Perhaps the biggest benefit of the Cactus’s low weight is that it results in excellent fuel economy and very low CO2 emissions.
The C4 Cactus is offered with a range of small-capacity petrol and diesel engines, and the 99bhp 1.6 BlueHDi is at the top of the range.
This 1.6-litre Blue HDi diesel is particularly efficient, emitting just 87g/km of CO2 and averaging more than 80mpg in official EU tests.

The new 1.2-litre PureTech petrol may seems small but thanks to the lightweight of the C4 Cactus the turbocharged three-cylinder engine provides nippy performance with good refinement. It’s economical too with a claimed 61.4mpg with the standard five-speed manual gearbox.

The petrol engines are also impressive when it comes to efficiency, with even the most powerful, 109bhp version emitting just 107g/km of CO2 and returning 60mpg in EU
A choice of manual or ETG automated manual gearboxes are available, with a choice of six different engines – four petrols and two diesels.

On the road, the C4 Cactus is a relaxing cruiser. The suspension does an okay job of ironing out rough surfaces, although big bumps do tend to thump into the cabin. The soft suspension also means there’s a bit of roll in corners, too, although it’s nothing too drastic, and there’s decent grip.

The Citroen C4 Cactus is very easy to manoeuvre, thanks to steering that gets lighter at low speed, and very good all-round visibility, while its squared-off rear also helps when reversing; you’ll have no problem judging where the back of the 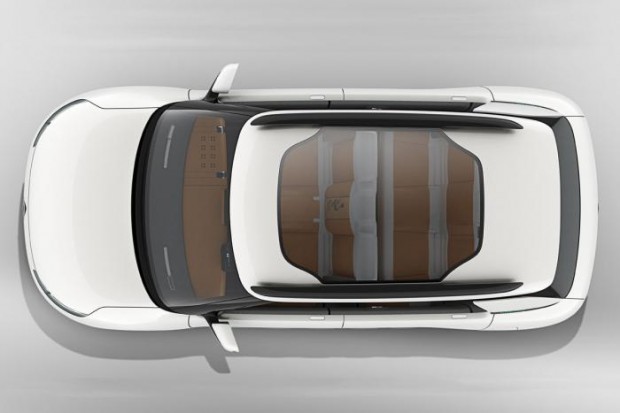 The new C4 Cactus is a step change for Citroen: its character and charm will win you over, and the more you spend time with it, the more you will love it.
This car offers a unique interior design has a boutique feel. It’s comfortable and refined on the move.
This car sets a template for pleasingly distinctive, back-to-basics Citroens in future, and I can’t wait to see them.